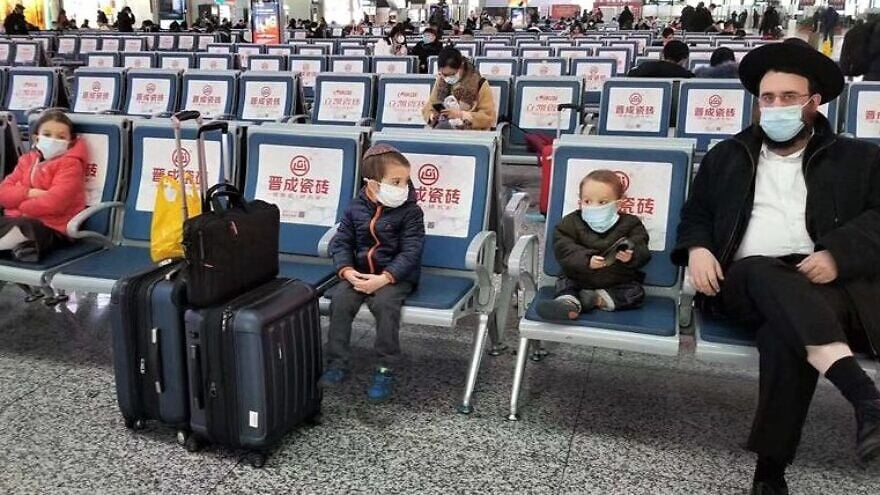 Rabbi Yekutiel Kalmenson of the Ningbo Jewish Center-Chabad made a trip to Shanghai, three hours away by bus, to stock up on kosher items. 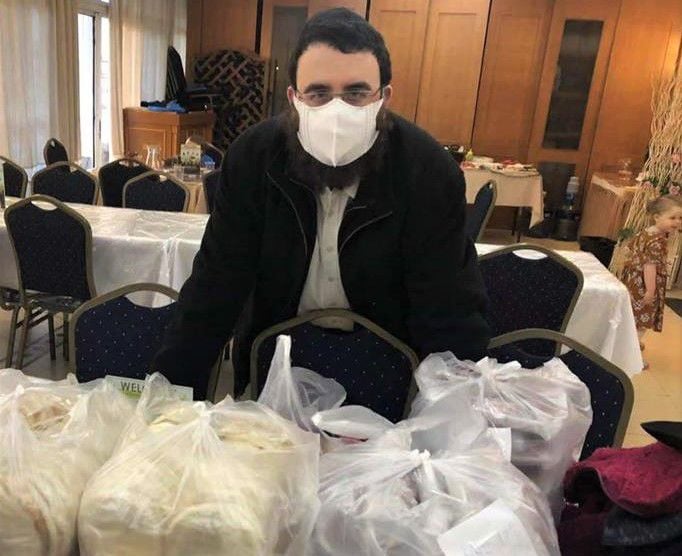 Rabbi Yekutiel Kalmenson of the Ningbo Jewish Center-Chabad with items he plans to give Jewish community members and tourists quarantined in the Shaghai district due to the outbreak of a coronavirus, January 2020. 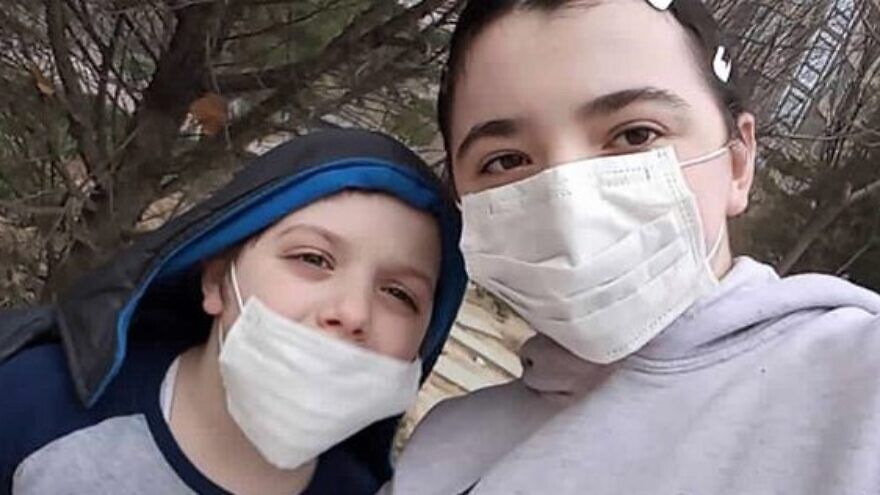 Grunia and Eliyahu Akiva Freundlich, children of Rabbi Shimon and Dina Freundlich, co-directors of Chabad of Beijing, wear masks to keep them safer from the outbreak of a coronavirus that has spread through the Shanghai district in particular, January 2020. 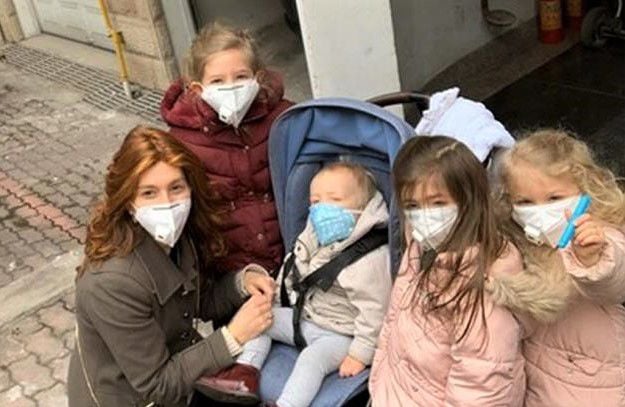 Sarale Henig, who co-directs Chabad of Chengdu with her husband, Rabbi Dovi Henig, and their daughters in Chengdu, China, wear masks to keep them safer from the outbreak of a coronavirus, January 2020.

As the death toll and emergency measures increase daily, Jewish communities in cities across China joined the population at large in the struggle to protect themselves against the new deadly coronavirus and cope with the extreme precautions being taken to guard against the spread of the flu-like respiratory disease. As of Wednesday, the virus has claimed at least 130 lives and infected more than 6,000 people in China alone.

Chabad-Lubavitch representatives and other Jewish community leaders across the country are doing their best to help and reassure residents and visitors while taking steps to protect themselves and their families.

In China’s capital, Rabbi Shimon Freundlich, co-director of Chabad of Beijingwith his wife, Dini, said he helped secure the evacuation of a Jewish mother and daughter from Palo Alto, Calif., who were visiting family for the Chinese New Year in Wuhan, the epicenter of the virus.

Freundlich said he was contacted about the matter by Rabbi Yosef Levin of Chabad of Palo Alto, Calif., where the mother, Dr. Esther Tebeka, and her family are congregants. Tebeka and her 16-year-old daughter flew to safety Tuesday night on a converted U.S. cargo plane bound for San Francisco with 228 others, including U.S. government employees and officials stationed around China. The arrangements were made with the help of one of Freundlich’s congregants, who was able to have Tebeka and her daughter added to the flight.

Meanwhile, Freundlich said that he and his family are vigilantly following health protocols calling for constant hand-washing, produce-washing, the avoidance of hand-shaking and the donning of what has become a scarce supply of face masks. He asked three girls who teach in a Beijing Jewish day school to return with 5,000 masks from their recent trip to Cambodia for the Chinese holiday.

Rabbi Mordechai Avtzon, head emissary to China and co-director of Chabad of Hong Kong with his wife, Goldie—and fellow emissaries Rabbi Shalom and Dinie Greenberg of the Shanghai Jewish Center; Rabbi Avraham and Nechami Greenberg of Chabad of Pudong, also in the district of Shanghai; and Freundlich and his wife—are leading a joint Chabad of China effort to establish a relief fund to assist Jewish communities around the country.

Elsewhere, despite increasing restrictions on movement and home-to-home temperature checks by authorities equipped with thermometers, Jewish community leaders were doing their best to remain in contact with their constituents.

“We are not leaving,” Rabbi Dovi Henig, who with his wife, Sarale, co-directs Chabad of Chengdu, a six-hour train ride from Wuhan, wrote in a social-media post directed at his community. “We are open and continue to spread the light of joy and love to everyone, and are in contact with all staying in the area, ready to serve, help and assist.”

Henig earlier reported that Chengdu—a city with about 150 Jewish residents out of a total population of nearly 15 million—was paralyzed like much of China with its streets emptied of trains and buses, and sporadically populated with people wearing protective masks. Jewish life, he said, was also disrupted as people were forced to deal with dwindling food supplies, restricted travel and growing fear. His usually robust Shabbat crowd this past Friday night was thinned down to nine people, he shared. “People are afraid to gather together,” he said, “afraid maybe someone will come who is infected.”

Officials in Wuhan, a city of 11 million people in the Chinese province of Hubei, shut down air travel and public ground transportation out of the area and halted internal forms of public transportation in an attempt to limit person-to-person exposure. Area hospitals are currently overwhelmed, with plans to erect new care centers overnight to meet the demand of those who need testing and treatment, and who require isolation.

Wuhan, where the virus is believed to have originated at an outdoor live-animal and seafood market in early December, is one of at least 15 cities in China on either partial or full lockdown. Businesses and schools have been ordered closed, with a sealing-off of tourism and other travel to and from much of the country. Nearly 60 million people have been affected by the lockdowns, including thousands of foreign travelers.

Symptoms and virus continue to spread

While the vast majority of new cases and deaths are concentrated in areas around the central Chinese province where the virus originated, other areas of China as far away as semi-autonomous Hong Kong were reporting cases of infection, along with other countries around the world. Australia, Cambodia, France, Japan, Nepal, Singapore, Taiwan, Thailand, Vietnam, South Korea and the United States all have reported between one and eight cases, with thousands more suspected asymptomatic cases—capable of passing the pathogen to others.

The current virus is being compared to the deadly SARS and MERS coronaviruses, but believed to be not as deadly or contagious. Most of the dead have been the elderly or health-compromised, with the youngest infected so far a 9-month-old girl being treated in Beijing. No deaths have been reported outside of China.

In Israel, as in other places around the globe, travel and health officials are taking extraordinary precautions with anyone coming from China in the past month who shows symptoms of the virus, which include high fever and cough.

Sarale Henig, who co-directs Chabad of Chengdu with her husband, Rabbi Dovi Henig, and their daughters in Chengdu, China, wear masks to keep them safer from the outbreak of a coronavirus, January 2020. Credit: Chabad.org/News.

Six people all showing symptoms, including one Chinese construction worker who traveled to Israel since the discovery of the virus and five Israelis who recently returned from China, were quarantined and tested in isolation in the past week in Israeli hospitals, with no confirmation of infection.

In Ningbo, China, a three-hour drive north of Shanghai on China’s eastern coast, Rabbi Yekutiel Kalmenson wrote that “we are pleased to inform you that with the help of Hashem, we are all doing well, and the Jewish center is—obviously with safety measures and precautions—still open and running. As transportation between cities is becoming more and more difficult,” he noted, “we made a special trip to Shanghai in order to stock up on kosher products.”

This story originally appeared on Chabad.org/News.