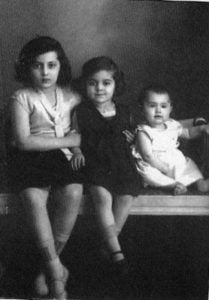 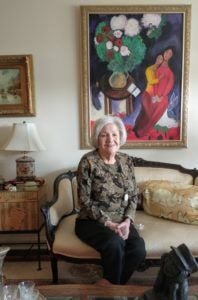 Even at 96, Holocaust survivor Cherie Goren doesn’t like sitting still.

The pandemic’s ended her regular bridge game for now and an insurance company decision cost her some mobility last month, leaving her largely confined to her condominium in Merion Station, Pennsylvania.

Goren said she’s been paying into a long-term care insurance policy with Transamerica for 40 years. With her health starting to decline last year, she filed a claim and, in July, the company approved her for five hours a day with an aide, who helped her run errands and other day-to-day activities.

But in February, the company sent out a nurse to assess Goren and determined she didn’t need the help, daughter Ellen Goren said, and stopped approving payments. The case is under appeal, marking yet another chapter in a long and interesting life.

Transamerica Public Affairs Director Erin Yang responded to an inquiry that, “Due to customer confidentiality, we are unable to provide information to you, but we have been in contact with the customer to address their concern.”

Born March 16, 1925, in the seaport town of Memel, Lithuania, as Sarah Fleishman and nicknamed Tutti (a cousin changed her name to Cherie upon arrival to the United States in 1939), Goren described a happy, prosperous childhood with her two sisters and brother. Their father, Leo, sold wholesale textiles, while her mother, Judith ran her family’s Schwartzen Adler Hotel.

“It was a good life — it was a very good life,” she said. “We had help. We had a beautiful apartment. We had the only car in the city.”

That started to change in 1937, when her father returned from a business trip to Czechoslovakia, sensing growing anti-Semitism and general unrest.

For the next two years, Goren and her sister Frances lived with their aunt in Riga, Latvia, while her father liquidated his store and began making preparations to immigrate to the United States. Most of the family’s wealth went to grease palms to enable their travel, Goren said.

When it came time to depart, the family avoided Germany, moving through the Scandinavian countries before taking a ship to Great Britain. From there, they took the Queen Mary to the United States, arriving in New York Harbor and passing the Statue of Liberty on April 20, 1939, which also was Adolf Hitler’s 50th birthday.

“The ship passed close to the majestic lady holding her torch,” Goren wrote in her book “A Time to Keep.” “New York appeared in the background. People around us were crying openly, so were my parents. I could not quite understand why, but I knew that this was the most auspicious moment in our life.”

There they were met by her aunt, Rachel Domont, who enlisted the Pepsi-Cola Co. in dealing with the red tape associated with immigration. The Domonts owned a bottling company in Indianapolis and bottled Pepsi for all of Indiana.

The story of Goren’s family’s departure from Lithuania is chronicled in the 2018 documentary “Leaving Memel - Refugees from the Reich,” directed and produced by nephew Fred L. Finkelstein.

The family spent the next few years in Indianapolis, eventually moving to New York, although Goren stayed behind to finish high school. She enjoyed the freedom of basically being on her own and recalled seeing an unknown “skinny young kid standing by himself” backstage at a Tommy Dorsey concert and asking for his autograph. The singer was happy to do so, signing, “To Cherie, Sincerely Yours, Frank Sinatra.”

“I didn’t graduate with my class because I cut too many classes,” she said. “I had to go to summer school.”

And she met one of her most valued friends, Rabbi Elias Charry.

At a wartime USO show, Goren met an Army Air Corpsmen from Pennsylvania named Joe Goren who specialized in “making false teeth for all the generals,” she said. They married and moved to the area a few years later, settling in

From there, they lived the American dream, raising two children in the suburbs and staying involved with the Jewish community.

Goren doesn’t think too often these days of her wartime experiences — she refers to her book as a coming to America tale, not a Holocaust story — but did make a return trip to Memel about 30 years ago. She found little recognizable, although her grandfather’s tombstone was just one of six saved from a cemetery there.

At the age of 50, Goren entered the work force, taking a part-time job at a National Beauty Stores location. Although she didn’t have retail experience, she eventually became merchandise manager for the eight-location chain and created a store-brand cosmetics line called Cherie Cosmetics.

Around the time she moved to the condominium she still calls home, she bought the insurance policy now in dispute.

“Forty years and never missed a payment and they just pulled it,” she said.

Goren might want some help, but doesn’t want anyone to believe she’s helpless.

“All of a sudden, you become a charity case,” she said. “The first time they sent me Meals on Wheels, I sent it back. ... The longer I live, the less I know.”

Still, Ellen Goren isn’t letting the insurance denial go easily, noting that her mother uses a walker and has been hospitalized on three occasions because of falls.

“I said, ‘You’re just waiting for her to die, so you don’t have to pay the claim,’” she said. “It’s just a very draconian way to do business.”