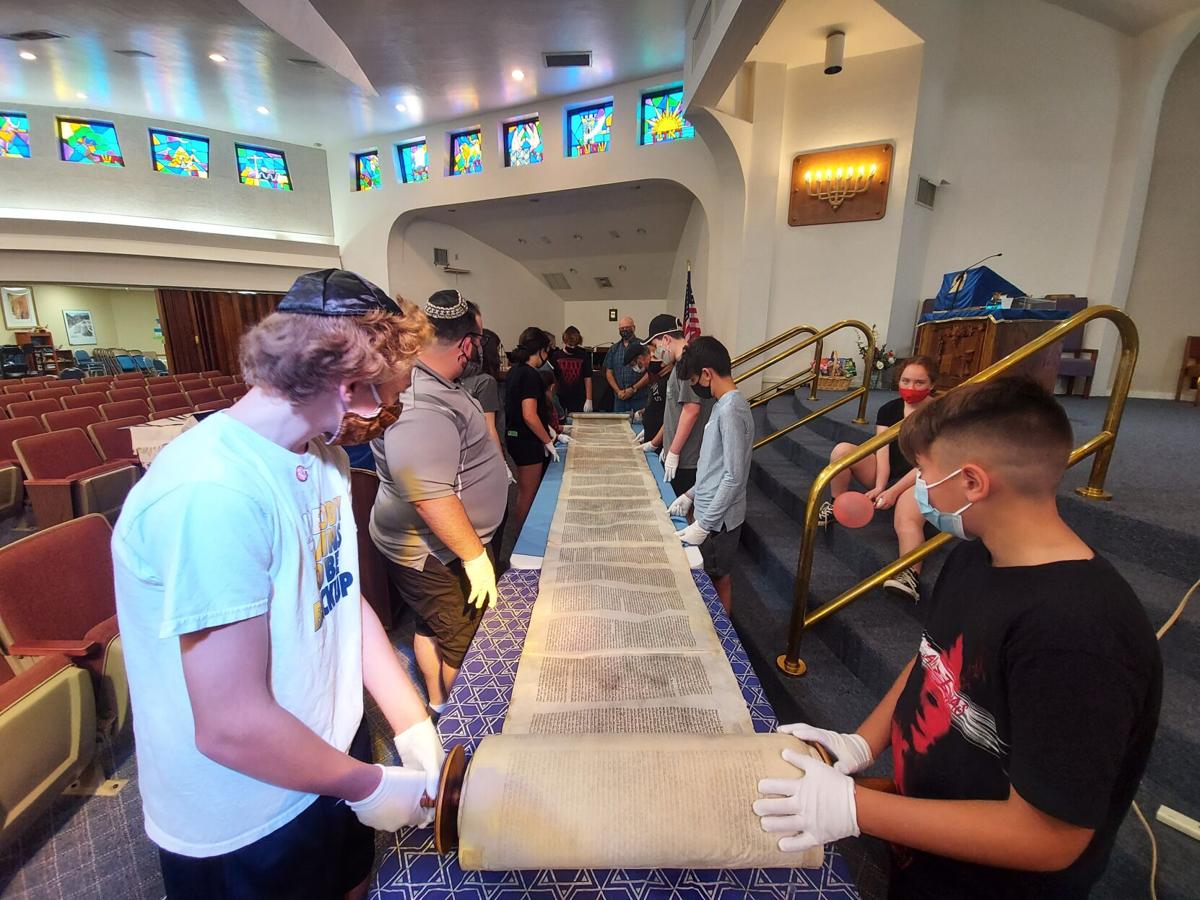 Bar and bat mitzvah students unroll a Torah at Temple Beth Shalom of the West Valley. 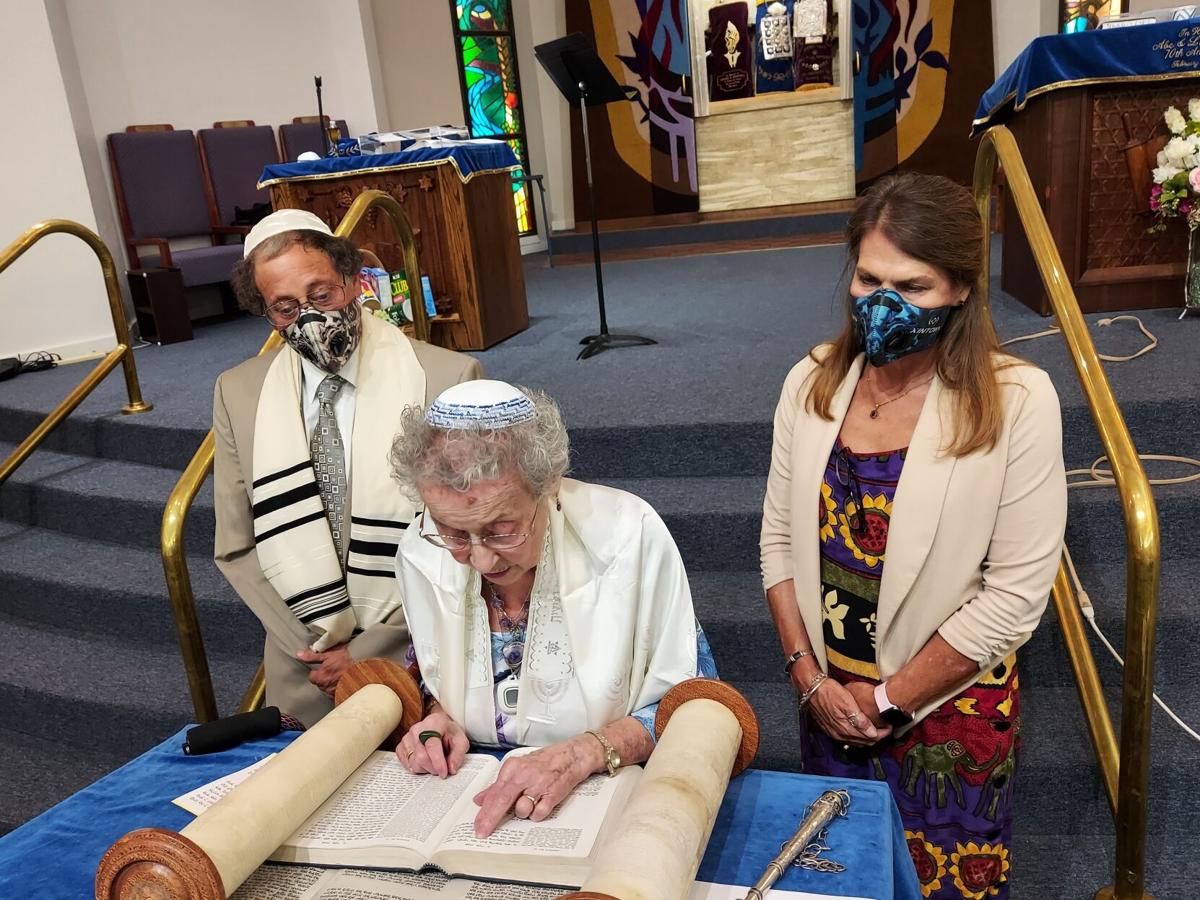 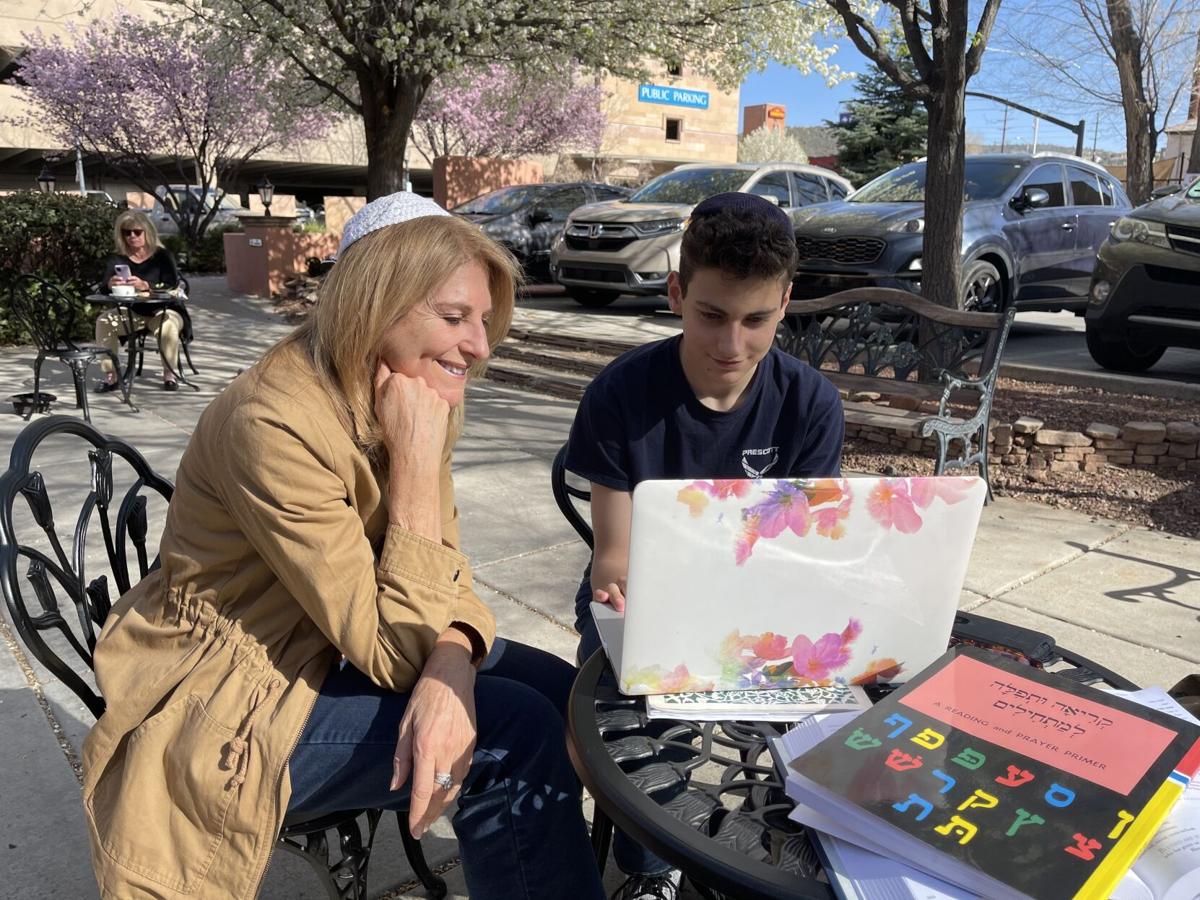 B’nai mitzvah ceremonies have transformed during the COVID-19 pandemic from crowded affairs to limited gatherings of friends and family. Over the past year people have become used to watching a Haftorah reading via Zoom instead of inside a sanctuary.

At first glance, that may seem like a big downgrade, but Greater Phoenix’s rabbis don’t view it that way. A few of them shared some of the past year’s ceremonies that will stick in their memories forever.

Downtown Phoenix Chabad Rabbi Dover Dechter will always remember a bar mitzvah that he witnessed right at the beginning of COVID.

It was scheduled to be in Israel on March 16, 2020. “There had been illness in the family, and this was bound to be a very special event,” Dechter said.

But as the day approached, the guest list shrunk as friends, family and relatives didn’t feel comfortable traveling amid the uncertainty, fear and danger brought about by the emerging pandemic.

“Finally, it was down to the wire and only the parents and bar mitzvah boy were going to go,” he said. Then, Israel sealed its borders to all foreign travel and the destination bar mitzvah was totally scrapped.

The family decided to forego the trip and have the ceremony anyway.

“It was a far cry from what they had envisioned,” Dechter said. “A grandma, two parents and the bar mitzvah were all who were able to make it.” But it was still very powerful.

“The bar mitzvah had been stripped of all the fanfare, but the core was still here,” Dechter said. “There were no distractions from the main part of what is a bar mitzvah. The effort everyone had to put in to get to that moment, really made it all the more special. I have attended many bar mitzvahs over the years. But this is one that will always stick out in my mind and will inspire me always.”

One unexpected ceremony last year stood out as especially moving for Temple Beth Shalom of the West Valley’s Rabbi Dana Evan Kaplan. Rae Bolnick, 100, was supposed to have her bat mitzvah just two weeks after the shutdown in March 2020. After much debate, she and her family decided to postpone. But with the help of Zoom, she ended up having her ceremony a few months later.

“The ceremony was held in our sanctuary with participation from many of her relatives on Zoom,” Kaplan said. “We all wore masks and socially distanced even though there were only six or seven of us in the entire sanctuary. Obviously this was not the ceremony that she had envisioned but it was nevertheless extremely moving.”

Kaplan was taken with the way Bolnick spoke about what Jewish wisdom had contributed to her appreciation of life.

At Congregation Kehillah, both Rabbi Bonnie Sharfman and Renee Joffe, the synagogue’s administrator, said that families learned a great deal from experiencing bar and bat mitzvahs during the pandemic.

“While there was a sense of shared disappointment on the part of some parents with plans being canceled, they also shared that it felt like a more intimate, personal experience with less distraction, and parents valued what Kehillah did to make it so,” Sharfman said, via email.

Kehillah’s first Zoom bar mitzvah was in March 2020, early on in the pandemic.

“Up until a few days before, we were still vacillating over whether or not to hold the ceremony in the sanctuary in person,” Sharfman said. “There was no precedent to follow from within or outside of our congregation about what a Zoom bar mitzvah would look like.” But the family set up a “sanctuary-like, sacred space in their home and we together processed so many details.”

The ceremony was virtual so many people from around the country participated who otherwise would not have been able to make the trip to Arizona.

“What made it special was our very determined bar mitzvah student who was extremely well-prepared, a very flexible and engaged family who put their trust in us and a commitment to living what a bar mitzvah actually represents,” Sharfman said.

One stand-out ceremony at Temple Emanuel of Tempe, happened only a couple of months ago, said Chelsey Falk, the b’nai mitzvah coordinator. Aidan Calabretti’s bar mitzvah on a Saturday morning in February came on the heels of the his mother’s bat mitzvah the evening before.

“Both were in person, outside, at the temple and it was so amazing to see them celebrate together with a small group of family members,” Falk said. “All of our ceremonies have been so special, mostly because the ceremony has been the main focus. And it’s been so meaningful for family and friends to come together for the first time in a while — whether it be with a small group in person or via zoom.”

Rabbi Julie Kozlow started at Prescott’s Temple B’rith Shalom only four months before the pandemic set in, and three of her students were ready to start preparing when she arrived.

“I was working with them on a weekly basis, and then COVID hit,” Kozlow said.

All three students decided to postpone their ceremonies, and one bat mitzvah student had to learn an entirely different Torah portion. Once Kozlow started the religious school, two more students, Leo Charlap, 12 and Adam Grey, 14 14, also wanted to begin preparing for a bar mitzvah.

All of her students are inspirational, Kozlow said, but she greatly admires the initiative of Charlap and Grey.

“For these two young men, Leo and Adam, to step up and in the middle of COVID, and say, ‘I want to be a part of the One Room Shul House at Temple B’rith Shalom, and I want a bar mitzvah,’ I think is inspiring beyond words,” Kozlow said. “It really just makes my head and my heart explode to see that with all the demands on them.”

This past year has been a lot to deal with for everybody, and especially kids, she said. “For them to still be inclined to a spiritual experience, to me, is amazing.” JN