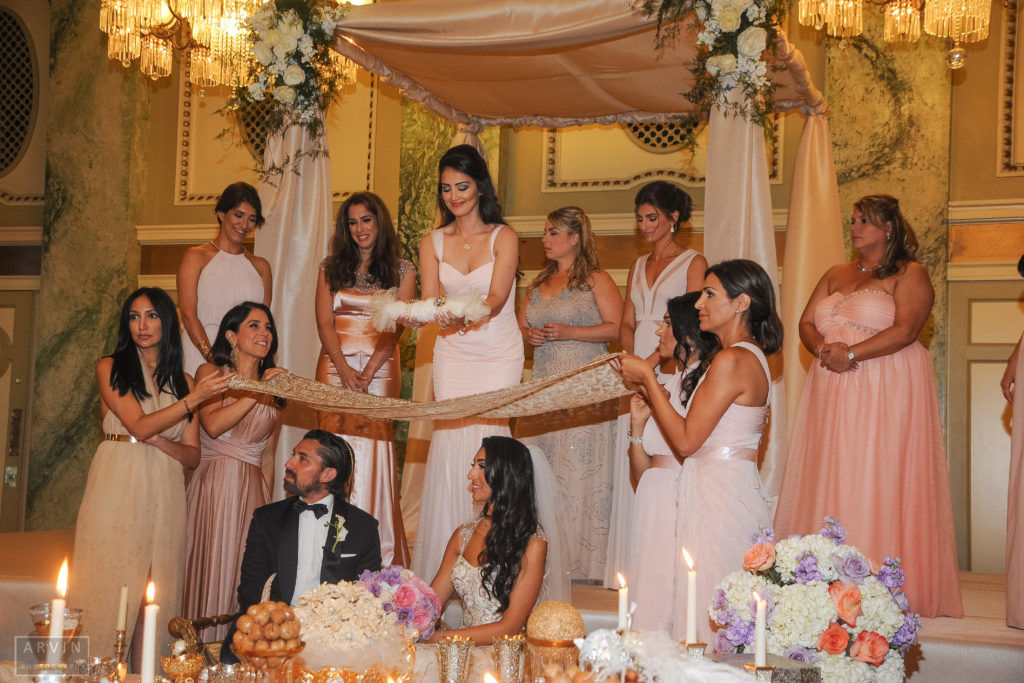 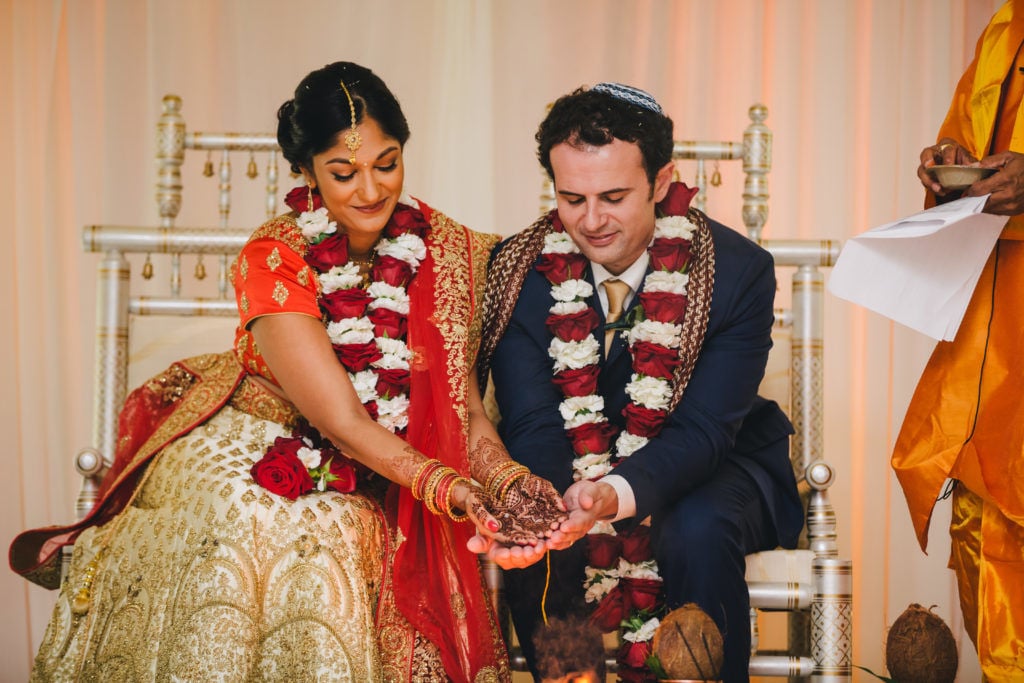 These days, when a Jew gets married, it’s likely to be to a non-Jewish partner. The Pew study of 2013 found that, in the years since 2000, the majority of non-Orthodox Jews — 72% — married someone who follows another religious tradition — or none at all.

When a Jew marries a Christian — or a Muslim, Hindu, Buddhist or Zoroastrian — there’s no guide to follow. And many of the necessary rituals may be unfamiliar to the other partner.

Such weddings aren’t trying to do the traditions “right,” says Rabbi Deborah Reichmann, of Potomac, Maryland, who officiates interfaith weddings. The actions aren’t seen as a literal connection to the deity.

“Weddings are all metaphor anyway,” Reichmann says. “The couple is basically professing their love and fidelity, and there are different ways of doing that.”

“For a lot of people who are really in love, their love upends religion,” says Rabbi Annie Bornstein, another Washington-area interfaith officiant. “For others, religion is not a major issue in their love.”

Four interfaith couples spoke to us about their weddings, how they tackled the planning and the challenges they faced.

Trevor Smith, 28, and his fiancée, Shir Kaplan, 25, are planning a wedding for May 2020. Smith is Christian, Kaplan is Jewish. They’re just beginning to plan.

“The interesting part about being an interfaith couple is what our faiths mean to us,” Smith says. “Both of our faiths are very important to us. We’ve had a very open conversation about what important traditions we want. We see our wedding as an opportunity to experience this other faith [and] do it right.”

(Kaplan was studying for the MCATs at the time of the interview and unavailable to talk.)

They’re firm on a few things, Smith says. They want two officiants, a Jew and a Christian. They want a ketubah (a Jewish marriage agreement) a chuppah (Jewish marriage canopy) and a glass to break at the end of the ceremony. They also want to perform the Christian custom of washing each other’s feet.

According to Smith, Kaplan’s family is from Israel and their diet is kosher-style. He says he’s learned a lot from his relationship with the Kaplans.

“The Jewish identity is much more complex than I originally thought,” he says. “It’s not just a faith matter. It’s a cultural matter, an ancestry matter and very ingrained in multiple aspects of her life. But in terms of wedding planning, it’s been eye opening.”

It becomes more complicated if a Jew is engaged to someone who isn’t Christian. They might struggle to find officiants or turn up a search of other couples who have led the way.

“We couldn’t find anything like our wedding,” says Jonathan Tahan, a Jew whose wife, Ashwinnie, is Hindu. “We had no starting point.”

Tahan says while they had no trouble finding a Hindu priest willing to co-officiate the wedding (the priest was a relative of Ashwinnie’s) they did have trouble finding a Jewish officiant. Then they struggled to figure out how to combine the traditions in a way that was satisfactory to both officiants and families.

“After that, we got a plan of how we were going to mix our traditions,” Tahan says. “We wanted [the officiants] to legitimize [what we wanted to do]. It was a new endeavor for all four of us.”

What they ended up doing was switching back and forth between the Hindu ceremony and the Jewish one. It all lasted about 1 ½ hours.

“There’s a lot in a Hindu wedding, we had to cut some out to make it shorter,” Tahan says. “[The officiants] knew that this would be a little risky and we got confirmation and acceptance from them.”

The hardest part was breaking the glass. The couple in Hindu weddings goes shoeless. To protect Tahan’s bare foot, the glass was wrapped in extra layers of napkins. Tahan was still nervous about cutting his foot, though it worked out in the end.

Another Jewish-Hindu couple, Alyson Kelly and Rahul Srivastava, found a different solution to breaking the glass. At that point in the ceremony, they left the platform and put on their shoes.

After Srivastava broke the glass, the

bridesmaids acted out a Hindu tradition of stealing his shoes.

Kelly said they benefitted from working with a Hindu priest who had performed an interfaith wedding with a rabbi.

“We had a script that we were basing it on, and we went from there. [There was] some kind of jumping in between,” Kelly said, adding she was happy to have somebody who knew what he was doing.

They had a chuppah that doubled as a Hindu wedding canopy, or mandap; danced the horah and were lifted on chairs. But they decided not to have a ketubah because Kelly’s parents didn’t have one at their wedding.

During the Hindu ceremony, Srivastava danced his way to Kelly. There was a fire ceremony where offerings were made and where the couple danced around the blaze. And Srivastava applied red powder to Kelly’s hair to symbolize her new status as a married woman.

Michael Tuteur and Maryam Nezamzadeh wanted their Jewish-Muslim wedding to balance the two religions as perfectly as possible. Tuteur, who is Jewish, says that Nezamzadeh had planned the entire wedding so that nothing would be left out.

“We were deliberate. We had to be,” he says. “We didn’t want people to think we were lopsided or imbalanced. I think that just starts with understanding. It requires constant thought. And that will be true for the rest of our lives.”

Bringing their traditions together was about honoring their respective heritages as well as their families. And this wasn’t a simple task, Tuteur says. They struggled to find officiants who wouldn’t put strict conditions on their wedding or who would perform it at all.

In the end, they worked with Bornstein and a Muslim friend of a friend who was willing to perform the ceremony. They had two weddings that day. First came a full Persian-Muslim ceremony, which included a sofreh, a table laid with multiple objects each with its own meaning. Once the wedding was finished, the couple turned in the opposite direction, stepped under a chuppah and underwent a full Jewish wedding.

“Ultimately, the last step was breaking the glass, which to me is a reminder that support is fragile,” Tuteur says.

And though they tried to honor their Jewish and Muslim heritages at their wedding, the couple say they are more interested in creating their own traditions and holidays, rather than figuring out how to combine two different traditions.

“For us, there might be holidays, but we [also] celebrate our own holidays by, for example, going back to a restaurant where something important happened,” Tuteur says.

“‘Love’ to us is short for ‘all-of’ the support, Tuteur says. “So, we considered ourselves married only after both certificates [the ketubah and nikaah] were signed and both ceremonies were complete. All-of the steps had to be completed.

For all four couples involved in this article, religion was important to consider in planning their ceremony, but second in consideration to their love.

“There’s no stopping them anyway,” Bornstein said. “These couples are going to bring the best of what each has to offer.” JN

This country has become a hub where people from all around the world are meeting with each other. As part of my religion, Muslim men are allowed to marry Jewish and Christian women, but Muslim women can only marry Muslim men.