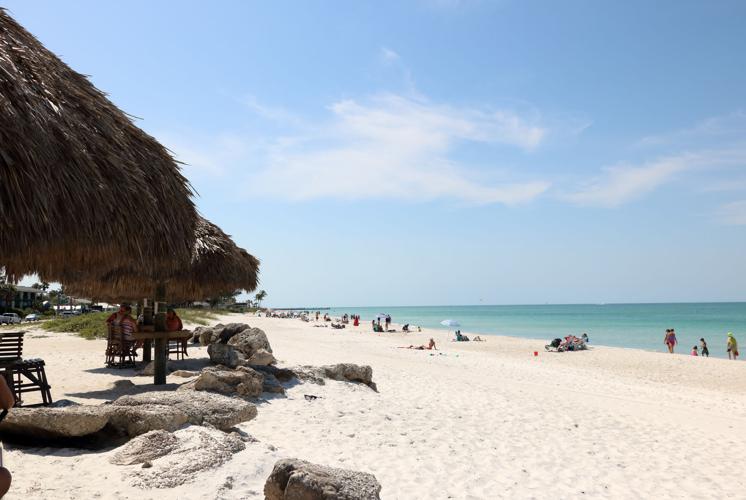 The tiki huts at the Kokonut Hut Raw Bar and Grill provide an opportunity for meal with a beach view. 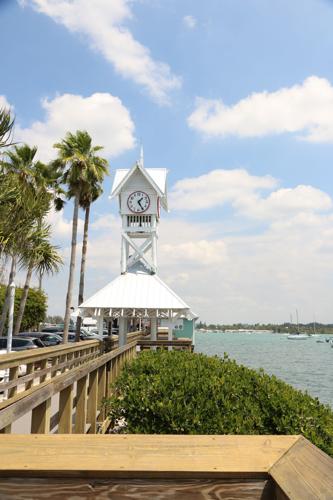 Bridge Street starts at a roundabout on the island’s main street and ends at the historic Bridge Street Pier, home to gorgeous view of the Gulf Intracoastal Waterway and the popular Anna Maria Oyster Bar. The fishing village of Cortez lies just across the water. 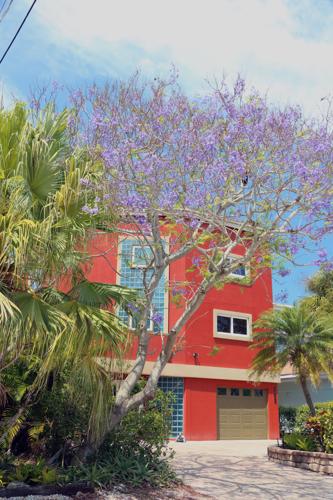 The subtropical climate and the seaside location combine to provide a colorful tree cover on Anna Maria. Here, a striking blue jacaranda tree in bloom provides nice contrast to the ubiquitous palm trees on a quiet residential street. 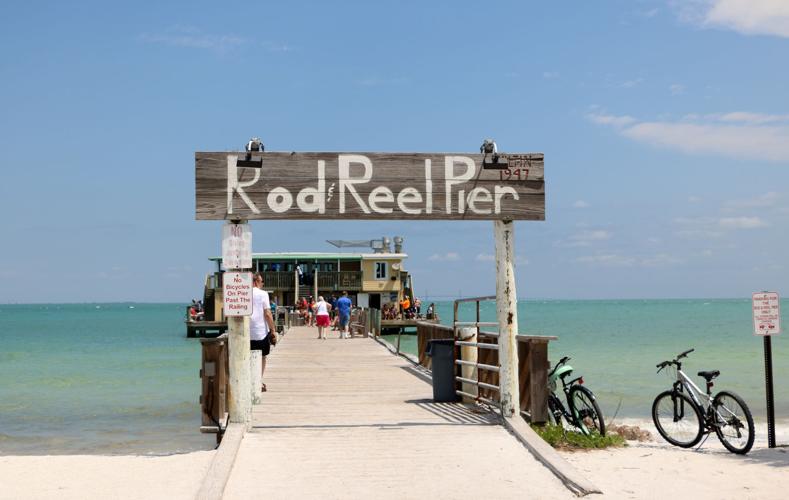 The Rod and Reel Pier is a popular spot for Anna Maria anglers. Tampa Bay and the Skyway Bridge to St. Petersburg are visible from the pier. 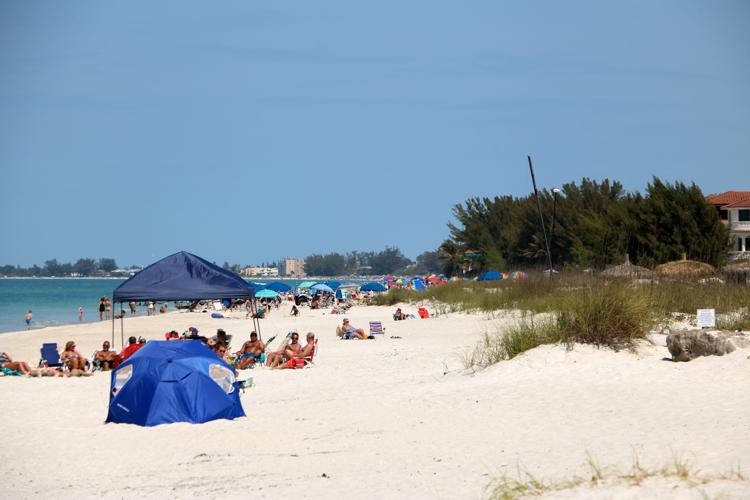 The tiki huts at the Kokonut Hut Raw Bar and Grill provide an opportunity for meal with a beach view.

Bridge Street starts at a roundabout on the island’s main street and ends at the historic Bridge Street Pier, home to gorgeous view of the Gulf Intracoastal Waterway and the popular Anna Maria Oyster Bar. The fishing village of Cortez lies just across the water.

The subtropical climate and the seaside location combine to provide a colorful tree cover on Anna Maria. Here, a striking blue jacaranda tree in bloom provides nice contrast to the ubiquitous palm trees on a quiet residential street.

The Rod and Reel Pier is a popular spot for Anna Maria anglers. Tampa Bay and the Skyway Bridge to St. Petersburg are visible from the pier.

Do you like pristine white-sand beaches, turquoise blue water and gorgeous ocean sunsets? Do you dream about unwinding and experiencing a laid-back “island time” vacation? Do you enjoy good food with a water view?

The island paradise of Anna Maria Island in the Gulf of Mexico awaits you just across the intercoastal waterway from Bradenton, Florida. It has all of that and more.

Easily reached and close to Sarasota’s cultural attractions and the big-city amenities of Tampa and St. Petersburg, Anna Maria is only a few hundred yards from the mainland but it has a vibe of its own that is unique this side of the Caribbean. No wonder it attracts so many destination weddings and friends and family getaways.

The island had an old Florida feel. Wander around and take in its classic Florida cracker architecture, its kitschy shops, a welcome absence of high rises and several free public beaches.

While Anna Maria’s main drags and popular restaurants can be crowded, especially in the late winter-early spring “high season,” the island abounds with nooks and cul-de-sacs and off-the-beaten-path places where solitude can be found with ease.

Before You Go, Check Out:

Getting There and Getting Around:

•There is a free trolley that circulates between Coquina Beach and major points on the island. The Manatee bus system (MCAT) connects with the trolley from the mainland. From Sarasota, the Longboat Key Trolley runs from Coquina Beach to downtown Sarasota via Longboat Key and St. Armand’s Circle. The fare is 75 cents — and less for seniors.

•By car, Anna Maria can be reached from Interstate 75 and U.S. 41 in Bradenton via the Florida Route 64 and Cortez Avenue bridges. To the south, Gulf Drive South becomes Gulf of Mexico Drive via a bridge to Longboat Key, off Sarasota’s coast.

•The nearest cruise port is Port Tampa at 58 miles. Port Canaveral is 172 miles away

•The nearest Amtrak station is Tampa, 58 miles away. Trains calling there serve the East Coast.

Must-Sees for a Short Trip:

Among attractions that you should take in are:

•Relaxing on the beach: Coquina Beach, Bradenton Beach and Holmes Beach are public. Many area waterfront restaurants also have beautiful beaches patrons may use. The Beach House, The Kokonut Hut and The Sand Bar are noteworthy.

•Cross the Cortez St. drawbridge and visit the nearby Sea Hagg shop and the authentic, working fishing village of Cortez.

•Having lunch or dinner at a waterfront restaurant. Choices range from elegant to casual. The highly-rated Beach Bistro is upscale, and Anna Maria Oyster Bar on the Bridge Street pier is casual. Both are popular.

If You Have Several Days:

•Rent a bicycle, boat or motorized scooter and explore the island.

•A day trip to Bradenton. Enjoy Old Main Street, the Village of the Arts, the Riverwalk and the Bishop Museum of Science and Nature.

•A day trip to St. Armands Circle (shops and restaurants) and Sarasota. Enjoy the Ringling Art and Circus Museum and many cultural events in season. Waterfront dining at Marina Jack or the rooftop bars at the Westin or the Art Ovation hotels are recommended.

•Deep sea fishing on the Gulf of Mexico from Cortez, Bradenton or Sarasota

•A golf or spa day

•An exploration of trendy downtown St. Petersburg’s museums and eateries.

Casual is the order of the day. Shorts and a sport shirt or blouse or even a bathing suit and a wrap will fit in almost anywhere on the island. Leave the T-shirts on the island. The mainland’s tonier places call for dressy resort casual.

This Destination at a Glance:

Over 50 Advantage: Getting unplugged, whether at a luxury or casual resort. The laid-back lifestyle is perfect for relaxation but culture and fine-dining are available near.

Mobility Level: Low. The island is flat and most places are accessible. Crossing streets can be hazardous when traffic is heavy.

When to Go: Year-round. December January and February can have cold days. November and March are usually gorgeous. Summers are hot and sticky with afternoon rain.

Where to Stay: There are scores of B&Bs, guest houses and small hotels on the island. A web search turns up possibilities from bargain to pricey.

Special Travel Interests: The seashore, museums on the mainland.

While there is no significant Jewish life or history on Anna Maria Island, a rich Jewish experience is close by on the mainland.

The first Jewish settlers arrived right before World War I. Until the population boom of the 1950s, the Jewish population remained small and there were few community-wide Jewish organizations and only two synagogues in nearby Sarasota and Manatee counties.

The United Jewish Appeal annual campaign grew along with the population in the second half of the 20th century and was the catalyst for today’s significant Jewish presence, anchored by the Sarasota-Manatee Jewish Federation. Today, in addition to that organization, there are 13 large and small Jewish congregations on the Suncoast.

A history can be found in Kimberly Sheintal’s book Jews of Sarasota Manatee. She traces Jewish life from the explorers of the 1840s, through Confederate Secretary of State Judah Benjamin’s brief exile there through the prominent Jews of today’s Sarasota cultural and commercial landscape.

Both Sarasota and Manatee (Bradenton and Lakewood Ranch) counties have attracted throngs of Jewish “snowbirds” (winter seasonal residents) and a rapidly-growing community of permanent Jewish residents who have emigrated from the Northeastern and Midwestern United States.

The current observant Jewish population is estimated by BestPlaces.net to be about 1.5 percent of the total population and is about double the percentage than for the rest of Florida. The region’s Jewish population is generally affluent. There are also about 15,000 people in Manatee and Sarasota counties who identify themselves as Jewish but are not members of any congregation.

Jews are active in the political and community life of the region, holding elective offices and important community positions.

The Sarasota-Bradenton urban complex on the mainland has an active Jewish Federation of Sarasota-Manatee, a Jewish Family and Children’s Service, a Jewish housing campus in Sarasota, and Jewish food and film f  estivals.

Kosher food to go can be found at Jo-El’s Delicatessen and Marketplace in St. Petersburg and large local grocery chains stock some kosher items year-round and kosher-for-Passover supplies. There are kosher-style delicatessens in Sarasota.