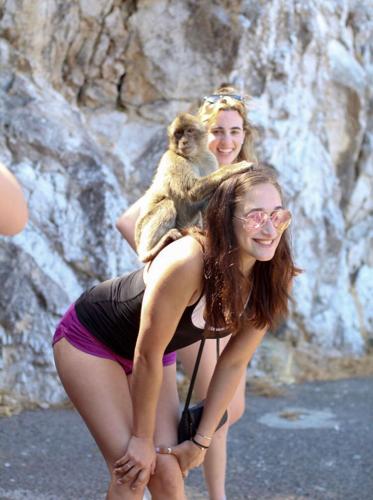 Faith Kessler gets a monkey on her back during her visit to the Rock of Gibralter. Kessler was the only person from Arizona who went on the BBYO Spain Discovery high school youth group trip this summer. 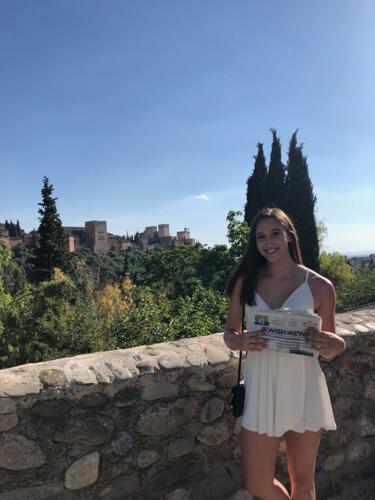 Kessler poses with a copy of the Jewish News in Granada. 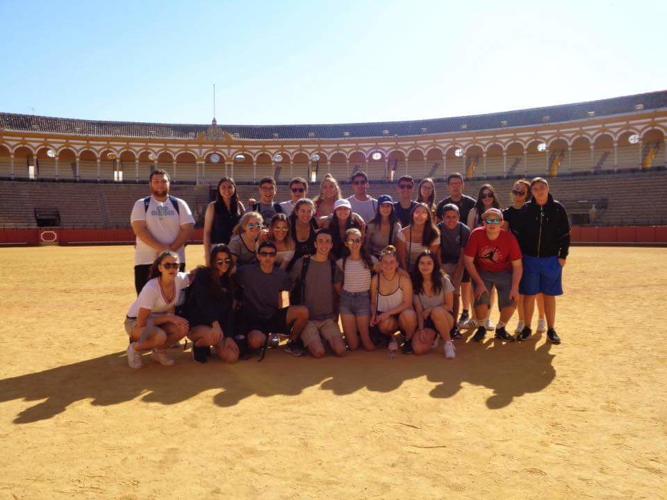 Faith Kessler gets a monkey on her back during her visit to the Rock of Gibralter. Kessler was the only person from Arizona who went on the BBYO Spain Discovery high school youth group trip this summer.

Kessler poses with a copy of the Jewish News in Granada.

Faith Kessler was the only person from Arizona who went on the BBYO Spain Discovery high school youth group trip this summer. Spain Discovery is a two-week cultural travel opportunity for teens to explore Spanish cities and meet the Jewish communities there. Kessler, a senior at Arizona Agribusiness & Equine Center in Phoenix, wrote this travelogue about her Spanish adventure. — Janet Perez

This summer I was fortunate enough to take a two-week BBYO passport trip all over Spain. This trip was designed for Jewish teens between the ages of 15 and 17 from across the United States.

I consider myself to be a pretty introverted person, so it was definitely a big risk, especially since I did not know a single person on the trip. My dad asked me one day if I for sure wanted to do it and I knew that if I didn’t sign up that minute it would be too late.

I knew that it would be a great opportunity to explore new places, meet new people and try new foods. And I was right! We went to various cities in Spain and even traveled to Gibraltar, a British territory. But first, we all met at the John F. Kennedy International Airport in New York, where we broke the ice and got to know each other. After the first day, I could already tell that I would be making friendships that would last a lifetime.

Our first stop was Barcelona, where we visited Sagrada Família, a large, unfinished Roman Catholic Church. Next up was the Ancient Synagogue of Barcelona. We wrapped up the Barcelona leg of our tour by visiting Park Güell, a beautiful garden with lots of architecture by the master Catalan architect Antoni Gaudi.

After Barcelona, we took a train to the beautiful city of Toledo, where we visited Santa María La Blanca, a museum and former synagogue considered by some to be the oldest synagogue still standing in Europe. That evening we celebrated Shabbat.

This Shabbat was very special to us because, first, we were in such a beautiful city, and second, it was led by us teens. We led the evening service, morning service, discussions and Havdallah.

Madrid followed Toledo and we visited the Real Madrid Soccer Stadium and explored the city. It was like nothing I had ever seen before. After Madrid, we went to Seville, where we took a beautiful river cruise. We got a panoramic view of the city from the water. We also visited the beautiful Seville Cathedral and climbed the Giralda Bell Tower. Then it was on to Christopher Columbus’ Tomb and Seville’s famous bullfighting ring.

After Seville, we visited Gibraltar, where we went to the beach, interacted with the Jewish community, ate Jewish food and toured the Rock of Gibraltar. The rock was filled with monkeys, not to mention a stunning view of the island.

After a few days in Gibraltar we departed to Cordoba, where we celebrated the final Shabbat of our trip and toured the city. After Shabbat was over, we had a relaxing evening at the Turkish baths. The Turkish baths had hot baths, ice baths, room temperature baths, steam rooms and much more. It was the definition of relaxation. After Cordoba we departed to our final destination — Granada. Granada is a relatively small city in Spain with breathtaking views. We got the chance to hike up the Sierra Nevada mountains and view ancient caves. That night we also saw a flamenco show.

By the end of the trip, we were one big family. We had built a bond like no other. This trip was definitely a trip of a lifetime and I will cherish the memories and people I met forever. JN