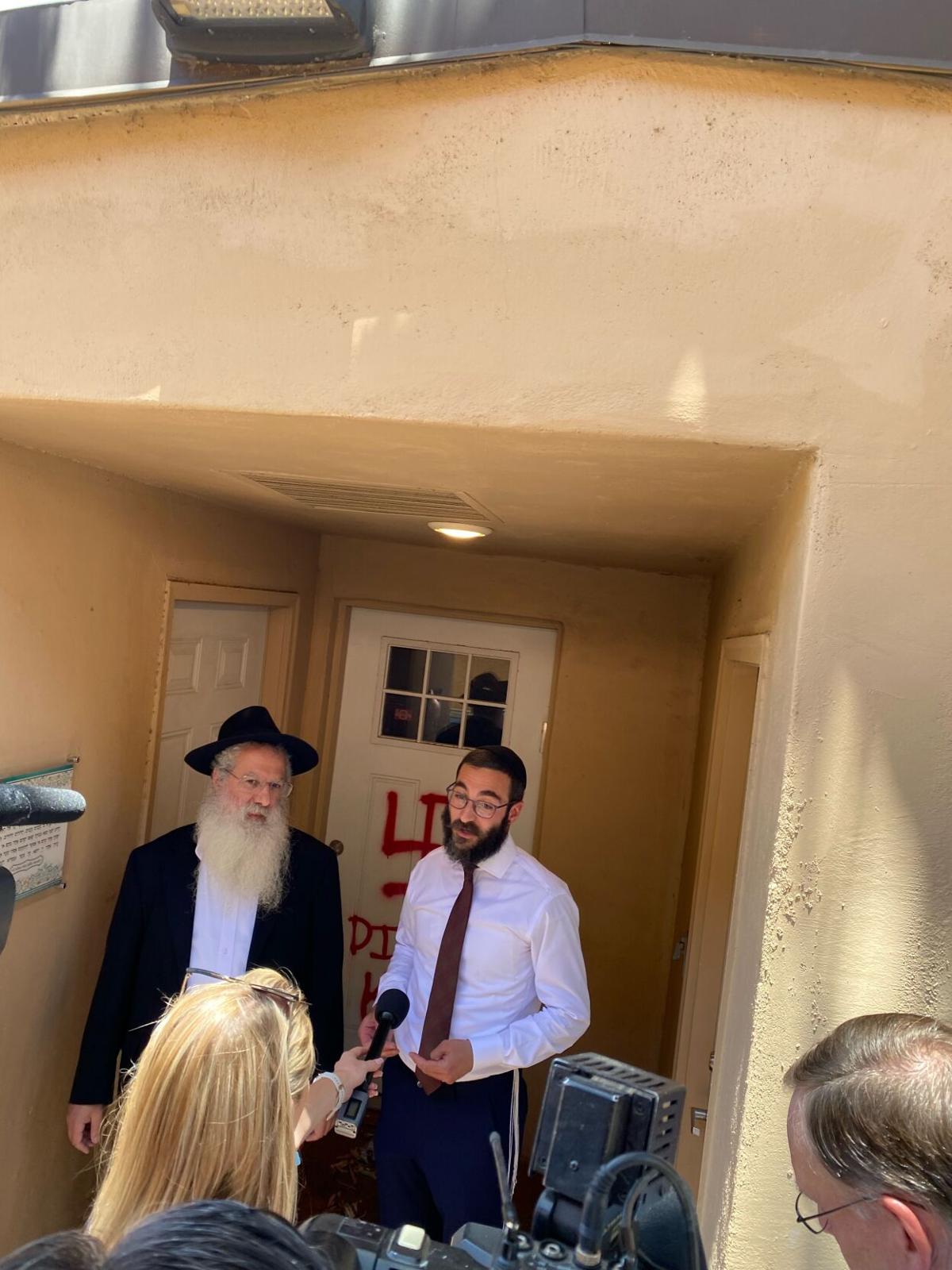 Rabbi Rami Bigelman, left, and Rabbi Yehuda Ceitlin speak to reporters outside the Chabad on River. 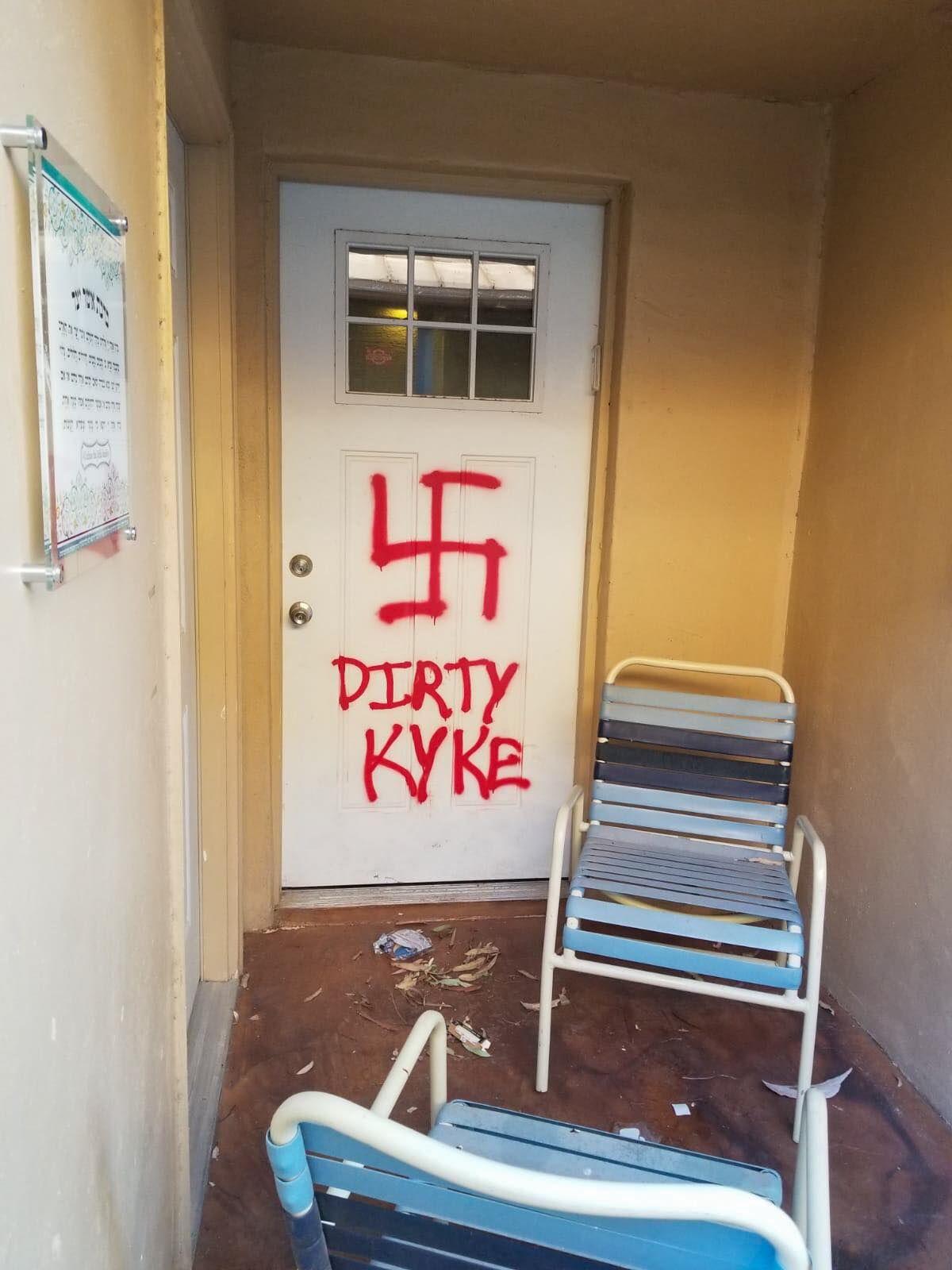 Rabbi Rami Bigelman, left, and Rabbi Yehuda Ceitlin speak to reporters outside the Chabad on River.

Jews going into their morning prayers and Torah class Monday at Chabad of River in Tucson were met with a vandalized entrance.

A swastika and antisemitic slurs were spray-painted on the door.

Rabbi Rami Bigelman, Chabad on River’s center director, said the vandalism is "very disturbing" and raises safety concerns. He said the building did not have a security system and he will immediately install one. The act of hate will not deter his work, he said, and he will increase the services the center provides.

Rabbi Yehuda Ceitlin, outreach director for Chabad of Tucson, said he appreciates the messages of support coming in from Tucson and around the world.

The antisemitic incident does not reflect the Tucson he knows, he said.

“Bigotry is really a symptom of a problem — it’s when people lose touch with their purpose to make the world a better place,” he said.

Ceitlin believes the expression of antisemitism fits in with a broader trend following the recent violence between Israel and Hamas in the Middle East. During nearly two weeks of fighting, the Anti-Defamation League tracked a 75% spike in antisemitic incidents in the United States, including assaults, vandalism, harassment and hate speech.

“While this is a terrible hate crime, it is not surprising in light of the increase in antisemitism we have seen here in Arizona and across the country," said Tammy Gillies, ADL’s regional director in Arizona. "ADL is working with law-enforcement on this despicable crime.”

Tuesday morning, Tucson Rep. Alma Hernandez (LD-3) tweeted, “When it happens to one, it happens to all of us. The amount of Jewish hate isn’t shocking. The silence is.”

Gov. Doug Ducey tweeted that antisemitism has no place in Arizona and this behavior cannot be tolerated. "We are ensuring the authorities are aware of this hateful act. Those responsible must be held accountable. Arizona stands with those of the Jewish faith."

Graham Hoffman, president and CEO of Jewish Federation and Jewish Community Foundation of Southern Arizona, called on "fellow Tucsonans" to stand with the Jewish community in combating "heinous acts of intimidation, hatred and antisemitism."

Tucson’s mayor, Regina Romero, tweeted, “This is an absolutely disgusting display of hate and antisemitism. This will not be tolerated in our diverse and welcoming city. I ask all Tucsonans to join me in standing up and raising awareness on antisemitism in all of its forms.”

Chicanos Por La Causa issued the following statement in support of the Jewish community: “Incidents of hate harm us all. As an organization with a presence in Tucson and Southern Arizona, we condemn this attack at Chabad on River. We believe all houses of worship should be respected and free of hateful incidents.”

And in a first, Tony Moya, CPLC's board chair, and David Adame, its CEO, made a joint statement about an antisemitic incident:

“Respect of all communities and faiths is paramount to a diverse society. The targeted vandalism on Chabad on River is a heinous attempt to offend and frighten congregants and the Jewish community in Tucson. But together we stand, unafraid and ever stronger than hate.”

The attack comes just weeks after a rock was thrown through a window in the front door of Tucson's Congregation Chaverim.

A survey by Pew Research Center released in May found that 53% of American Jews say they personally feel less safe than they did five years ago. JN