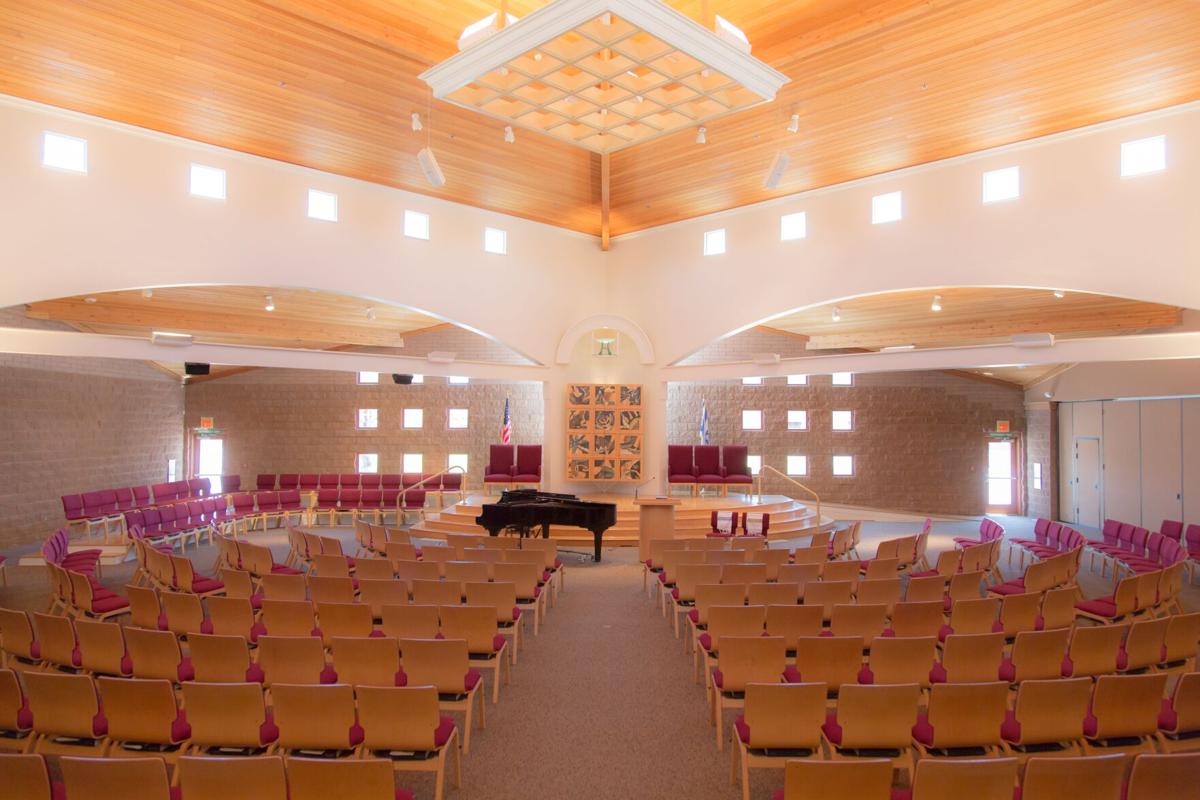 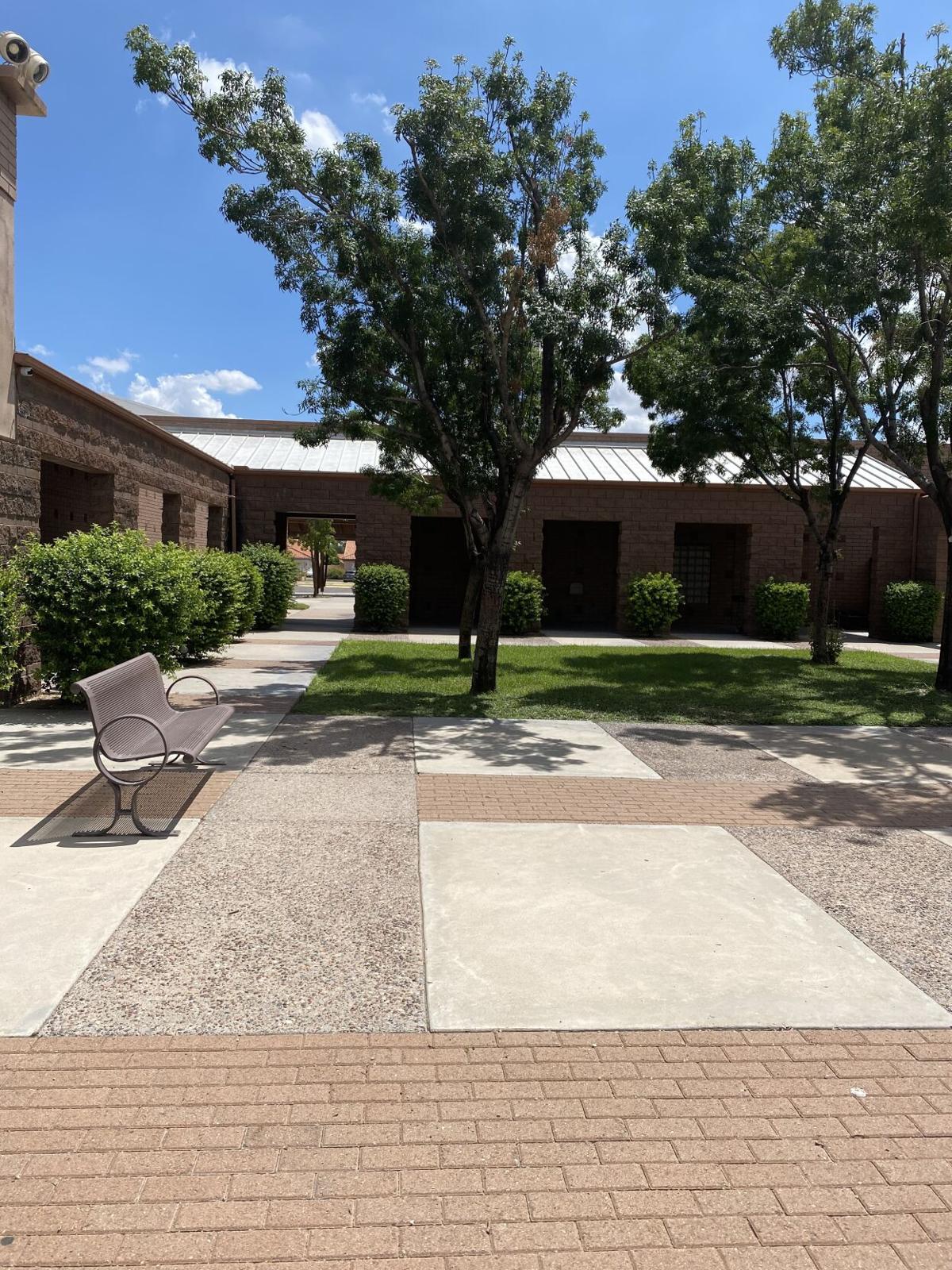 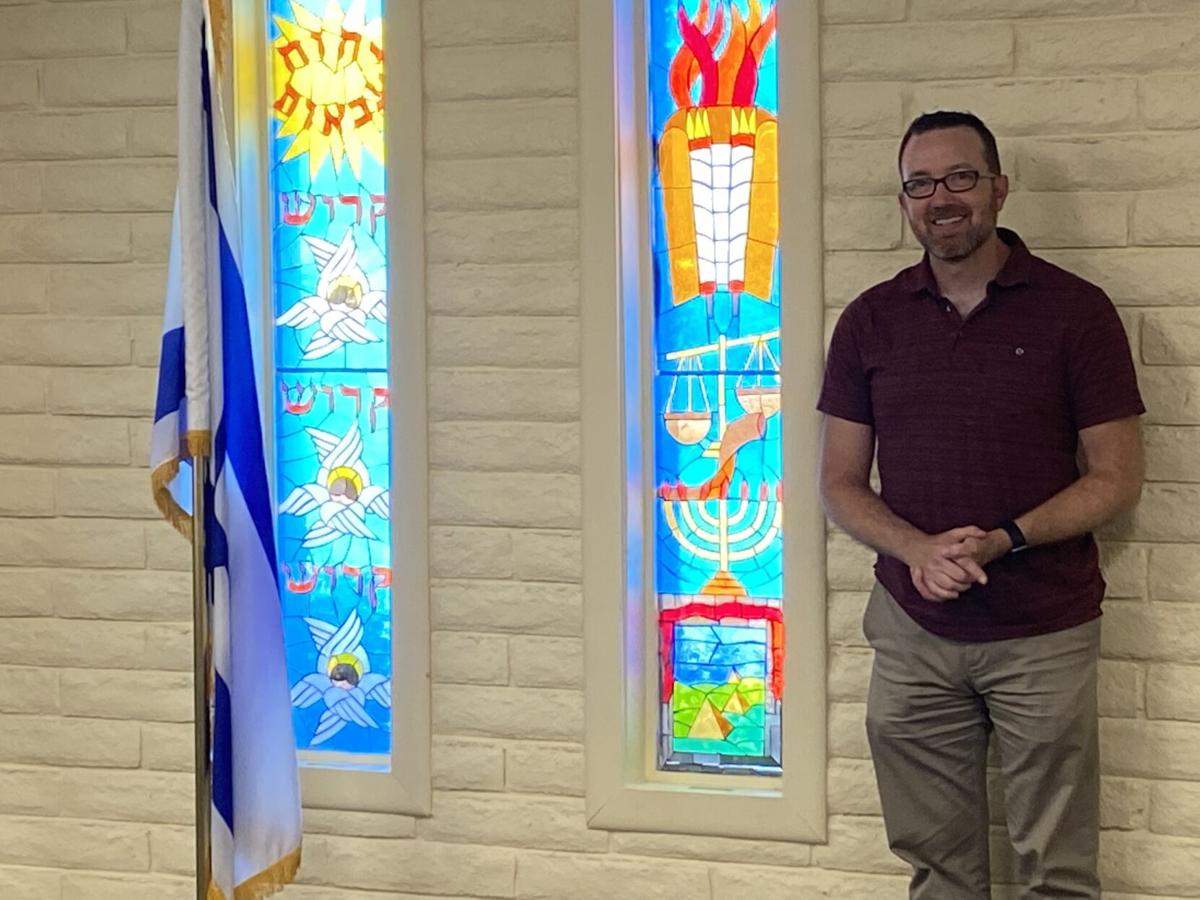 Cantor Ross Wolman in Temple Chai’s small sanctuary, which started out as a horse barn. 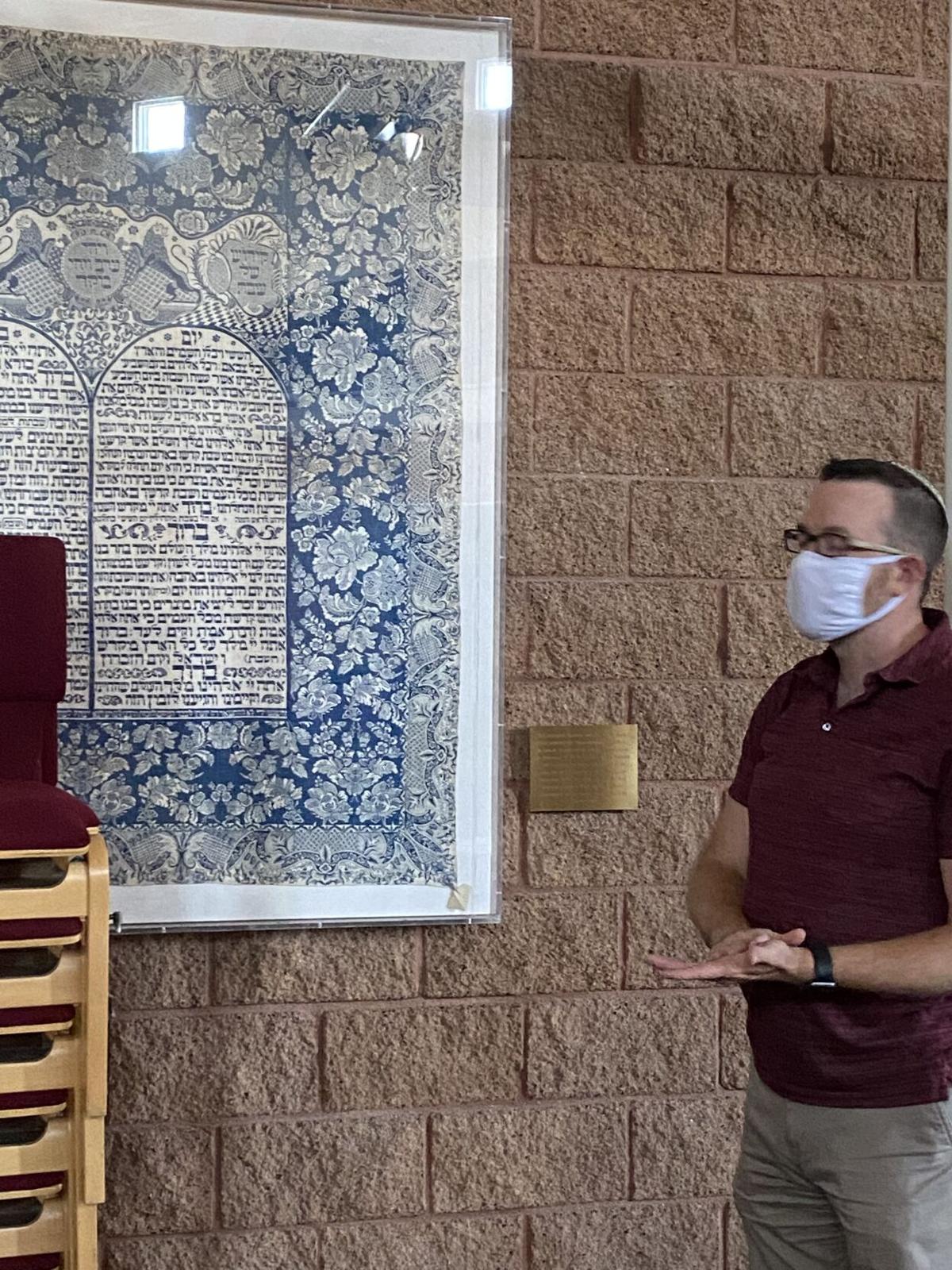 Cantor Ross Wolman in front of a tapestry, which originally hung in a Berlin synagogue recovered after World War II. 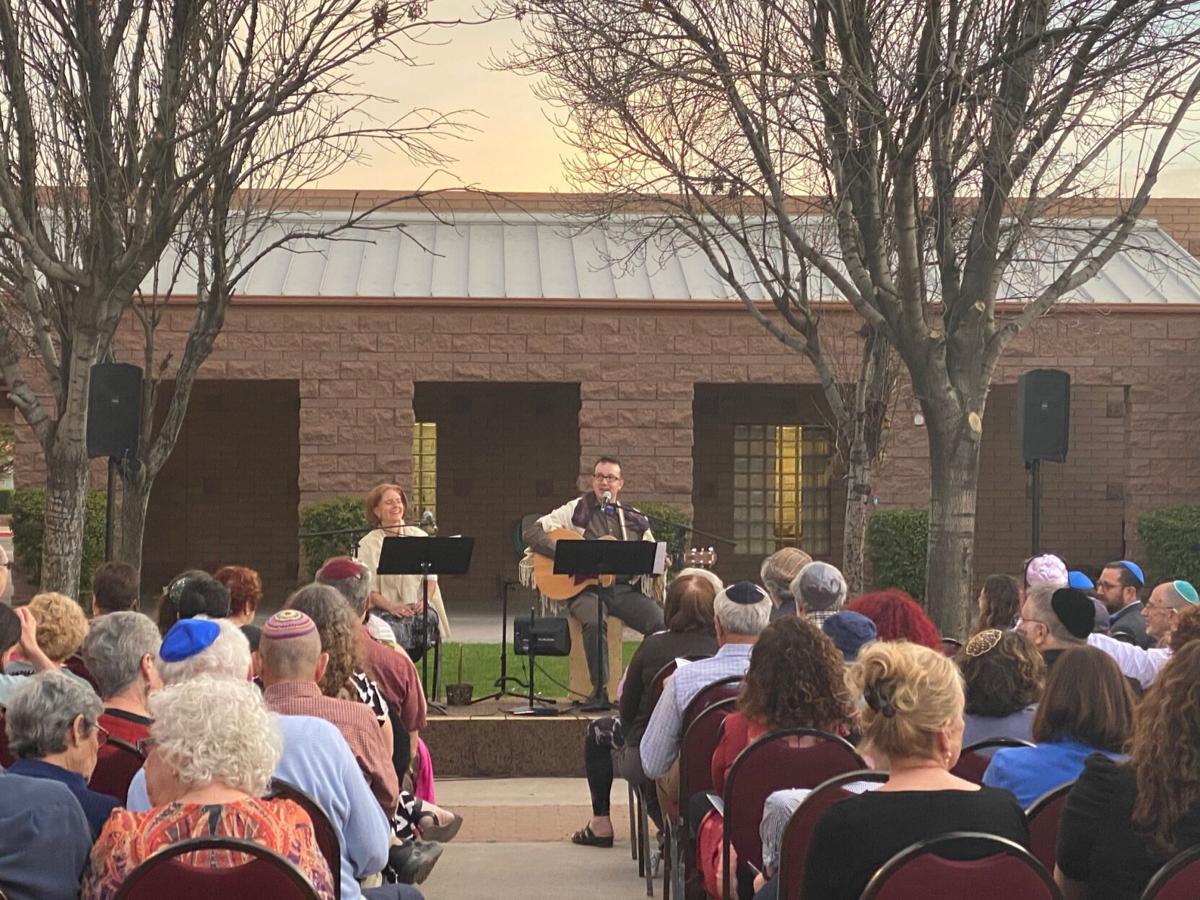 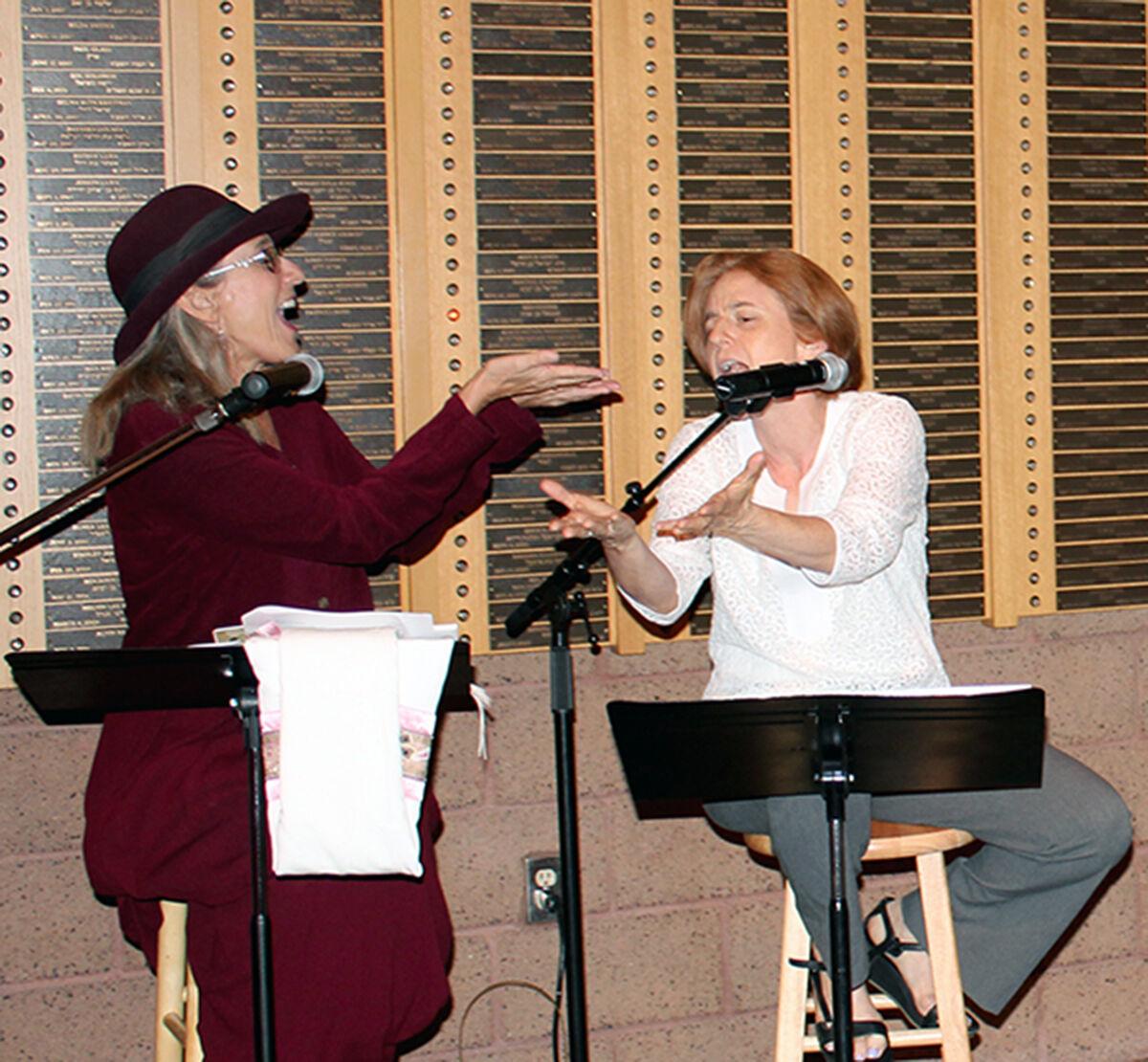 Members of Temple Chai have three years to find a new home.

After six days of online voting last month, 61% of the synagogue’s members said yes to the sale of Temple Chai’s property at 4645 E Marilyn Rd. in Phoenix to its longtime neighbor, Scottsdale Christian Academy.

In the months leading up to the vote, the idea of selling the synagogue’s property was difficult for some congregants to accept and led to discord. But now with the vote over and a majority of the membership signaling a readiness for change, clergy, staff and congregants are working to heal the divisions and move forward together.

Sharon Lewis, a member of 25 years, said, “I’m not very attached to bricks and mortar, but some people are.”

Rabbi Bonnie Koppell, who described the Temple Chai community as “the most loving place on earth,” is certain that “the congregation that designed this beautiful place is capable of designing another one.” And anywhere they end up, “the ritual objects most meaningful will come with us,” she said.

Debbie Blyn, Temple Chai’s former executive director, said that for a long time, there were no plans to sell its property. But there were offers. And when one from SCA came, the board investigated.

The synagogue and church have had a longstanding relationship, Blyn said. Temple Chai has used SCA’s property and the church has used the synagogue’s parking lot for overflow events of its own.

Despite the congregation’s emotional attachment to the property, Blyn said, there were many considerations in favor of selling: The building is old, and the administrative buildings need updating with all the associated costs of repair or replacement. And there are security issues, because the campus is very open.

“It’s, quite honestly, not the way a Jewish campus would be built today,” she said.

Temple Chai Cantor Ross Wolman agreed. “We’re at a crossroads, and the trend in synagogues is that people are moving and synagogues are changing — buildings are a liability,” he said, explaining that a majority of the space goes unused most of the week and keeping it all cool in the summer is expensive.

The structure is full of great stories and memories, he said, but he’s focused on the opportunity to create a new worship space and early childhood center.

One board priority is ensuring any transition for its early childhood center "will be as seamless as possible," said Lea Plosker, vice president of education at Temple Chai. She was also clear that families of b'nai mitzvah children will have a bimah and Torah for their child.

Once the board signed on to the deal in May, membership had until Aug. 2 to agree. But not everybody was ready to.

Some congregants were happy with the news, viewing the sale as an opportunity to start fresh.

Lewis, who assisted in setting up the eventual vote, felt it was an opportunity for the synagogue to get its finances in order so that it can “thrive and grow,” she said.

Some members who supported the move had a few doubts.

Gross voted yes, in part, to ensure financial stability. But he worries that there’s no certainty about the next location. And having grown up in a “traditional-looking” Pittsburgh synagogue, he likes the look of Temple Chai. “It has a very synagogue vibe to it,” he said.

The real problem, he said, is the “bitterness” of some members opposed to the sale.

A group of them formed the Temple Chai Vote “No” Committee and sent an email July 14, ahead of the voting, to the entire congregation outlining their concerns.

They argued the board should take a more “prudent” approach, and questioned whether selling the building was the best course of action, especially in such a short time frame. They also outlined other options like repairing certain parts of the facilities or selling only parts of the campus.

And those opposed to the sale had emotional considerations, such as a personal attachment to the existing sanctuary. “Our sanctuary has been a site of numerous important events for many of us, and this creates great value for our congregation,” they wrote in the email.

Janice Dinner, president of the synagogue, wrote in a long email to congregants July 2, that the survey found members were clearly concerned about the physical location of a new synagogue, its aesthetics and the emotional toll of leaving the current sanctuary.

“I too love our sanctuary, and I too contributed to its creation,” Dinner wrote. “Knowing we must leave is painful to me.”

She responded to many of the concerns raised in the survey, which would later be reiterated by the Vote “No” Committee: A partial sale does not seem realistic; the search for a new rabbi following Rabbi Mari Chernow’s departure in June after 18 years won’t be negatively affected; the synagogue’s financial situation is reviewed at the annual meeting; and capital campaigns have fallen short when less money was needed in the past.

Dinner acknowledged her discomfort with “the tenor of the conversation” about the sale. She encouraged the congregation to “go forward together” and “keep our focus on the common goal we all share ensuring that Temple Chai is vibrant, lively, healthy (financially and otherwise) for generations to come.”

Given that the vote was not close, Dinner hopes the results will help the congregation to move past this tumultuous season.

“We can now envision our future and who we want to be,” Dinner said. “We don’t have to be everything to everybody — there are infinite possibilities.”

SCA is in the 60-day period to complete its due diligence of the contract, which will be followed by an additional 30 days before the deal closes, although SCA could decide to move faster. Under the arrangement, Temple Chai will lease the current building for two years while a new location is found and voted on. A third year of leasing is available if the congregation does not make a decision by that time.

Brent Hodges, SCA’s superintendent, declined to comment until the sale is final.

The purchase price is $5.1 million and includes a credit of $300,000 for two years of prepaid rent. Blyn said Temple Chai should net approximately $3 million, after paying off the balance of the mortgage.

Lewis was relieved by the vote’s margin. The vote to sell represents an opportunity to determine “what will work best for the next 20 years in the Phoenix Jewish community and how we fit into this larger picture — to me, it’s a huge gift.”

Gross theorized part of the bad feelings surrounding the sale could have been due to COVID. “Face-to-face communication keeps congregations together,” he said.

On Aug. 6, the synagogue held “a service for healing and peace.” Congregants from both sides of the issue attended, and Wolman said progress was made towards reconciliation. Clergy, staff and congregants are now conversing regularly about what they want and need in a new structure.

“While it was difficult,” Wolman said, “we’re moving on together and people are telling me they’re ready to back the board so we can have a future.”

Brooks Hilliard, a member for more than 30 years who opposed the sale, said he believes everyone on both sides of the question wanted what was best for the congregation. He further explained, “We all accept the congregation’s decision and we’re united in our desire for a strong ongoing Temple Chai community, whether the buyer elects to go through with the sale or not.”

Koppell wasn’t overly disquieted by the difference in opinion. “That’s the Jewish way,” she said.

Having gone through a similar situation when she was the rabbi of Temple Beth Shalom of the East Valley, she understands and empathizes with the heartache of some members.

“This change is just a lot for people to absorb right now,” she said. In addition to the sale, and Chernow’s departure, Blyn stepped down in June as executive director.

But Koppell also knows how exhilarating change can be. “I remember how exciting it was when we physically walked the Torah scrolls from the old sanctuary to the new one in the East Valley.”

Plosker said, "Our community is about the people. No matter where we go, this will always be the case."

Lewis, too, is preparing for the next phase. She recounted that Temple Chai started in someone’s backyard, moved to a strip mall and the current structure originated from a horse barn and grew “hodge-podge from there. Now there’s an opportunity to get it right — plan for growth and do it in a thoughtful way.” JN