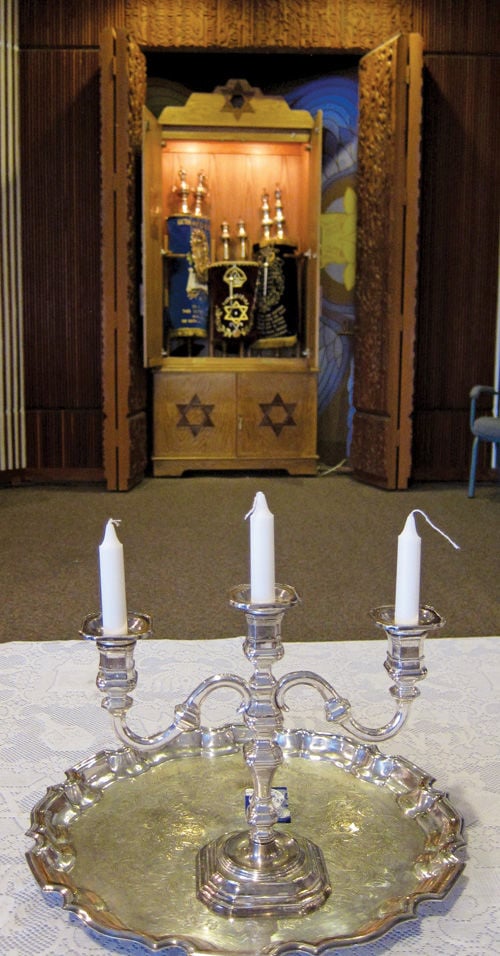 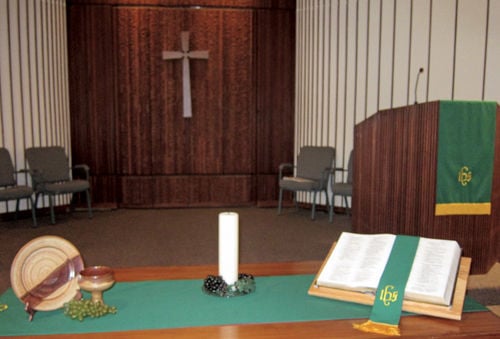 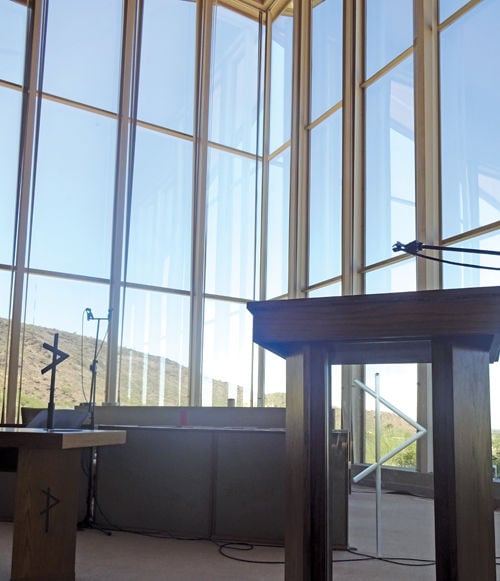 Congregation Merkaz Ha-Iyr uses the sanctuary of Shadow Rock United Church of Christ in Phoenix. The church’s predominant religious symbol is a “wedgeblade” – shown at left and under the podium – instead of a cross.

Congregation Merkaz Ha-Iyr uses the sanctuary of Shadow Rock United Church of Christ in Phoenix. The church’s predominant religious symbol is a “wedgeblade” – shown at left and under the podium – instead of a cross.

Whether or not you’re affiliated with a Jewish congregation, you probably are aware that it takes millions of dollars to construct a facility in which to hold worship services, offer educational and social programs and operate a religious school. A number of congregations in Greater Phoenix have determined that building and maintaining their own space is prohibitively expensive, and have found a suitable alternative by sharing space with other faith groups.

Beth Ami Temple is a prime example. Established in 1978 as a congregation for active adults, it has shared space with Palo Cristi Presbyterian Church in Paradise Valley for its entire existence, according to Beth Ami member Arnold Schwartz.

The church sanctuary “is ideal for sharing worship services,” said Rabbi Art Abrams, the spiritual leader of Beth Ami. “We have a beautiful holy ark and three Torahs. The church has beautiful nature banners around the wall which blend into our use. The benefit of using the sanctuary is to have a home for our synagogue that is conducive to Jewish worship.”

Beth Ami’s ark is situated behind cabinet doors that virtually disappear when opened (see accompanying photos). The cross on the cabinet doors is moved aside “and the room becomes a synagogue,” Abrams said.

“Prior to our services, the church administrator removes the cross and the church’s religious items from the bimah and the walls,” Schwartz said.  Beth Ami’s  Shamas Committee volunteers arrive about an hour before the service to open the folding panel doors, unlock and open the ark and set up the prayer books and other ceremonial items so that the room is transformed into a temple sanctuary, he said. “The reverse procedure is followed after each service with the room left exactly as we find it.”

“It is my understanding that the chancel area of the church (the raised platform at the front of the sanctuary, similar to a bimah) was purposely built with a large concealed area to house an ark and Torah for a Jewish congregation,” said the Rev. Linda Worsnop, who has been the pastor at Palo Cristi since 2012. The facility was built in 1965.

There are multiple advantages of sharing the space, Worsnop said. “It’s an opportunity to share a common belief in God, to learn from each other, to sometimes share fundraising projects, to interact when invited, as many from Palo Cristi came to a pre-Passover service and learned more about the seder.” Sharing the physical space gives Palo Cristi some added income as well, she said. In addition, “sharing encourages relationships that we might not otherwise have.”

That sentiment is echoed by longtime Palo Cristi member Pat O’Grady, who said that sharing the space gives church members an opportunity for memorable experiences. In January, for example, Phoenix physician Zuhdi Jasser, who founded the American Islamic Forum for Democracy, spoke to Beth Ami members on a Sunday afternoon and church members were invited to his talk. “He mentioned the uniqueness of a Muslim speaking to a Jewish congregation inside a Christian church,” O’Grady said.

Presbyterian Church USA’s approval of a series of resolutions at its June general assembly in support of the Boycott, Divestment and Sanctions (BDS) movement against Israel isn’t a concern for Palo Cristi or Beth Ami, both Worsnop and Abrams said. “Palo Cristi is neutral on this issue,” Worsnop said, in large measure because “we value our relationship with Beth Ami and we don’t want anything to impact it.” If that stance were to change, Abrams said, “I certainly would react to that by contacting the leadership of the church and having a dialogue with their congregation.”

Other congregations enjoy sharing space, too.

Congregation Merkaz Ha-Iyr in Phoenix was established nine years ago and shared space from the outset at Crossroads Methodist Church in central Phoenix. But a little more than a year ago, Rabbi Erica Burech and other congregation leaders decided they needed more space. They found a new home at Shadow Rock United Church of Christ at Eighth Avenue and Thunderbird Road in Phoenix.

“The sanctuary is so breathtaking and the tall windows looking out onto mountain views are so beautiful,” Burech said, adding that the church’s predominant religious symbol isn’t a cross, but a “wedgeblade.” This symbol, resembling a sideways capital A, according to the church’s website “points to a faith that calls us to consider what it means to be in right relationship to history and inspires us to be change agents of history that bring God’s love, peace and justice into our world.” That message, Burech said, speaks to tikkun olam and doesn’t present a theological conflict for Merkaz.

“We’ve barely scratched the surface of advantages of sharing space with Shadow Rock,” she said. “We have an opportunity to embrace our differences, to learn from each other and to do social justice projects together,” she said. “Members of Shadow Rock are so open to understanding other faiths.” She added that the two congregations regard the values of inclusion, justice and spirituality similarly.

Ruach Hamidbar-Spirit of the Desert was established 25 years ago and has rented space for its operations since its inception, though not always in a church, said Rabbi Sarah Leah Grafstein, the congregation’s spiritual leader.

“Since our focus is not on building and maintaining a physical structure, we will continue to rent,” Grafstein said.

The congregation has tried renting space in another synagogue, Grafstein said, but has been turned down. “It came as a shock to me when many synagogues in the Valley would not rent us space year-round,” she said. In the past, Ruach Hamidbar has rented space in a Unitarian church and at Palo Cristi Presbyterian. For the past three years, the congregation has rented space at North Scottsdale United Methodist Church.

“The churches we have rented from have all been very accommodating, especially around our holy days,” she said. “We have always maintained meaningful friendships with the ministers, staff and congregants.” With North Scottsdale Methodist, she said, her congregation has shared a seder and made donations to a food bank together.

To modify the chancel of the church for her congregation’s services, Grafstein said, “we have several beautiful hangings that cover the cross.” One is a Kabbalistic rendition of the sephirot (attributes) on the Tree of Life.

NefeshSoul is a congregation established in late 2013 after starting out as a chavurah that shares space at Valley Unitarian Universalist Congregation (VUU) in Chandler, said Rabbi Susan Schanerman. VUU was “so accommodating and welcoming that we were delighted to enter into a rental agreement with them,” she said.

VUU doesn’t have overtly Christian artwork, Schanerman said. “Our only request so far has been not to erect their Christmas tree in the sanctuary until we hold our December service each year,” she said.

Schanerman said she participated in the church’s Passover seder one year and delivered a sermon on Sukkot one Sunday. “Their minister participated in our Yom HaShoah program two years ago,” she added. Both congregations are planning to share a winter program this year on loss and grief.

“For a small congregation like us, it is wonderful not to worry about mortgage payments, repairs or infrastructure,” she said. “We could not exist at the present time if we did not share space. We have access to a large sanctuary, a terrific AV system, classrooms, a board room, storage and a kitchen. We have opportunities to publicize our programs with them and vice versa. There are possibilities in the future for shared programs and activities.”