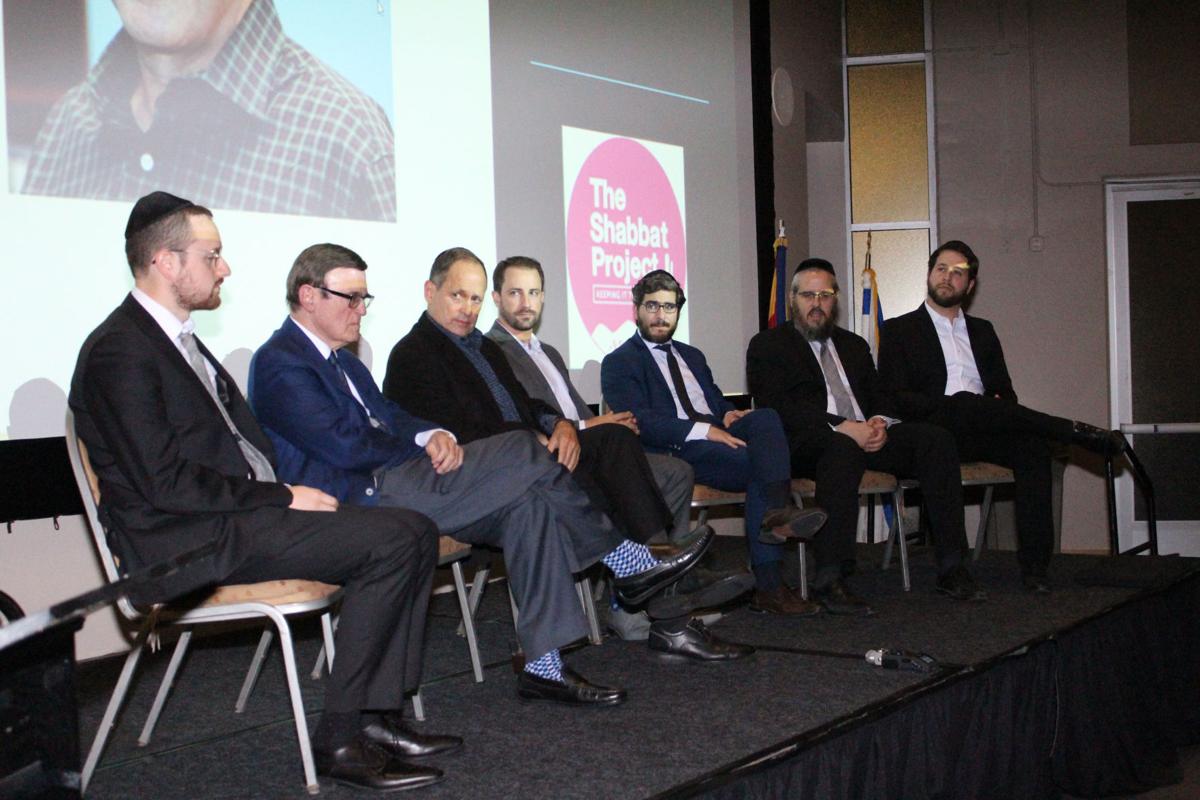 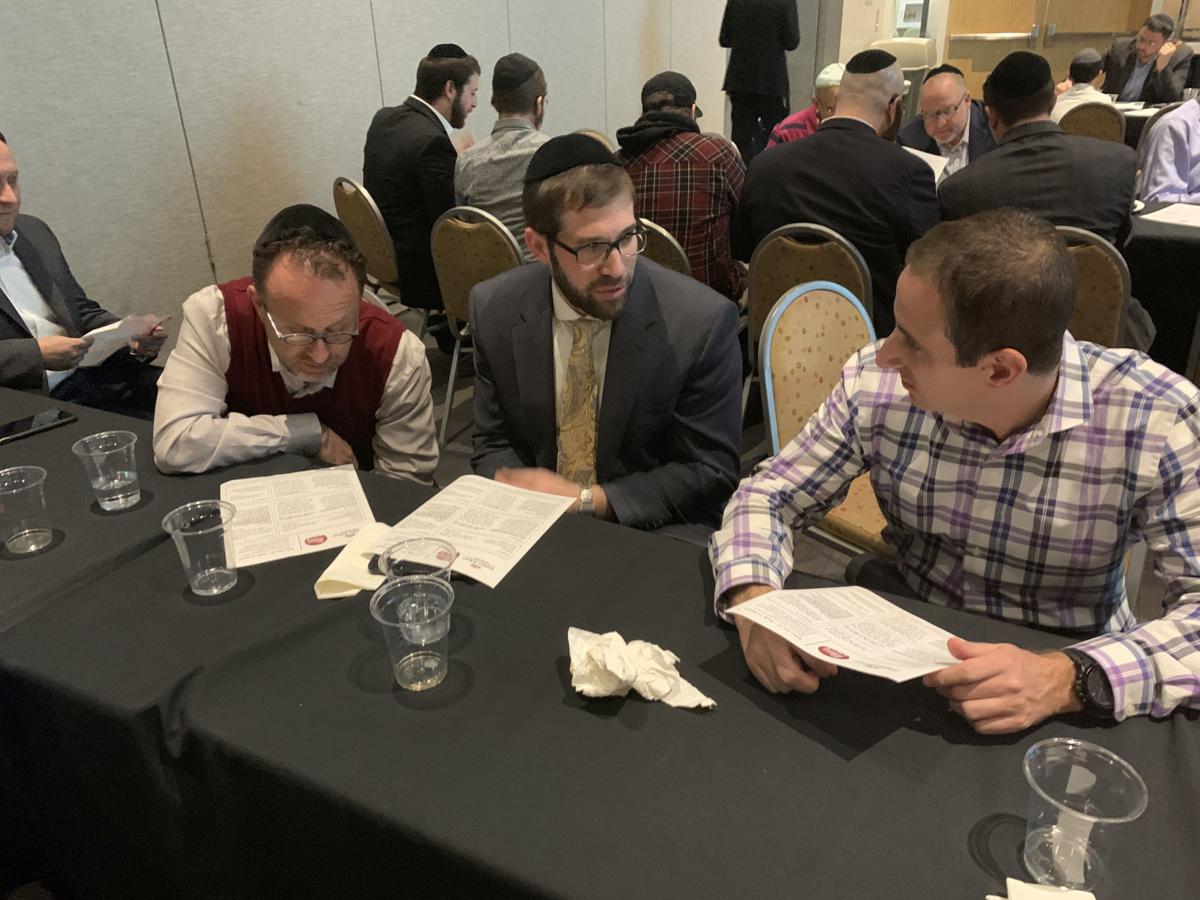 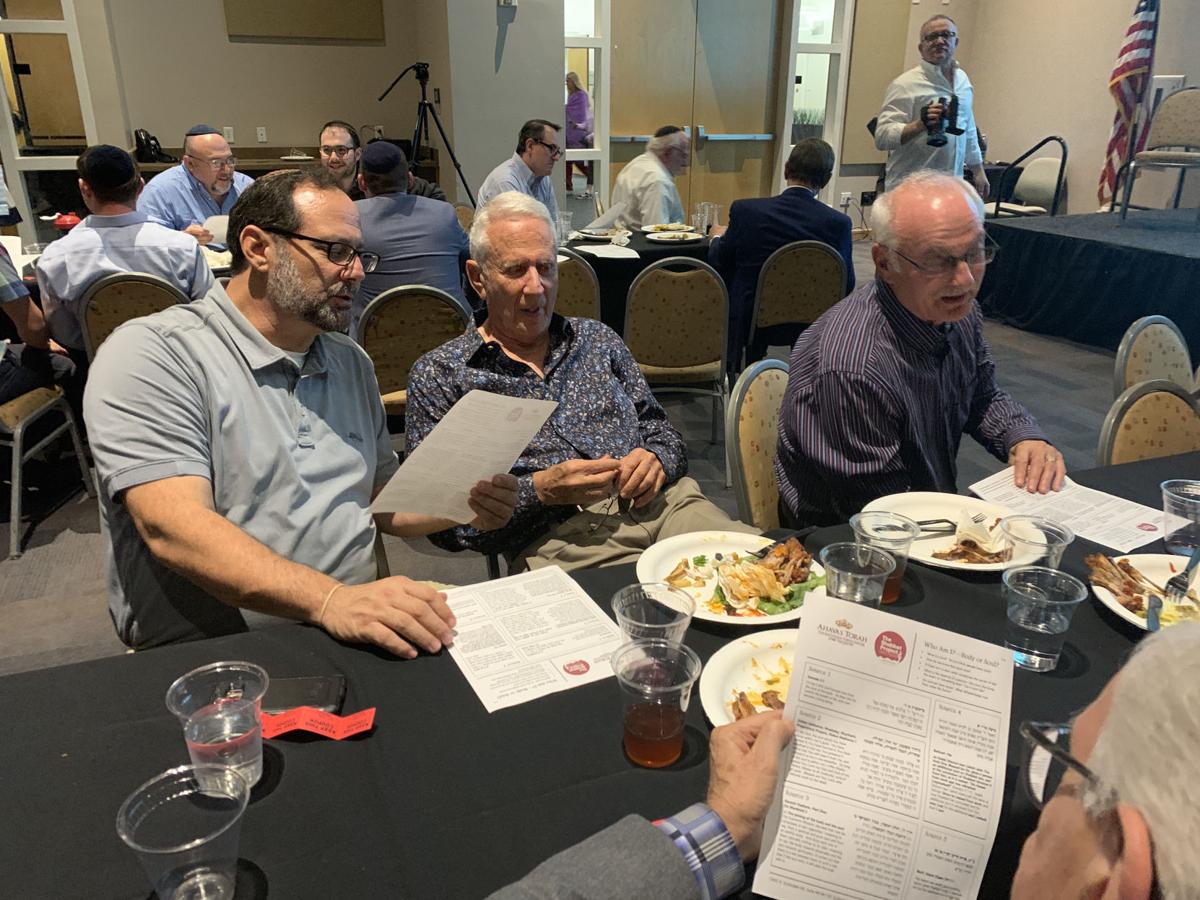 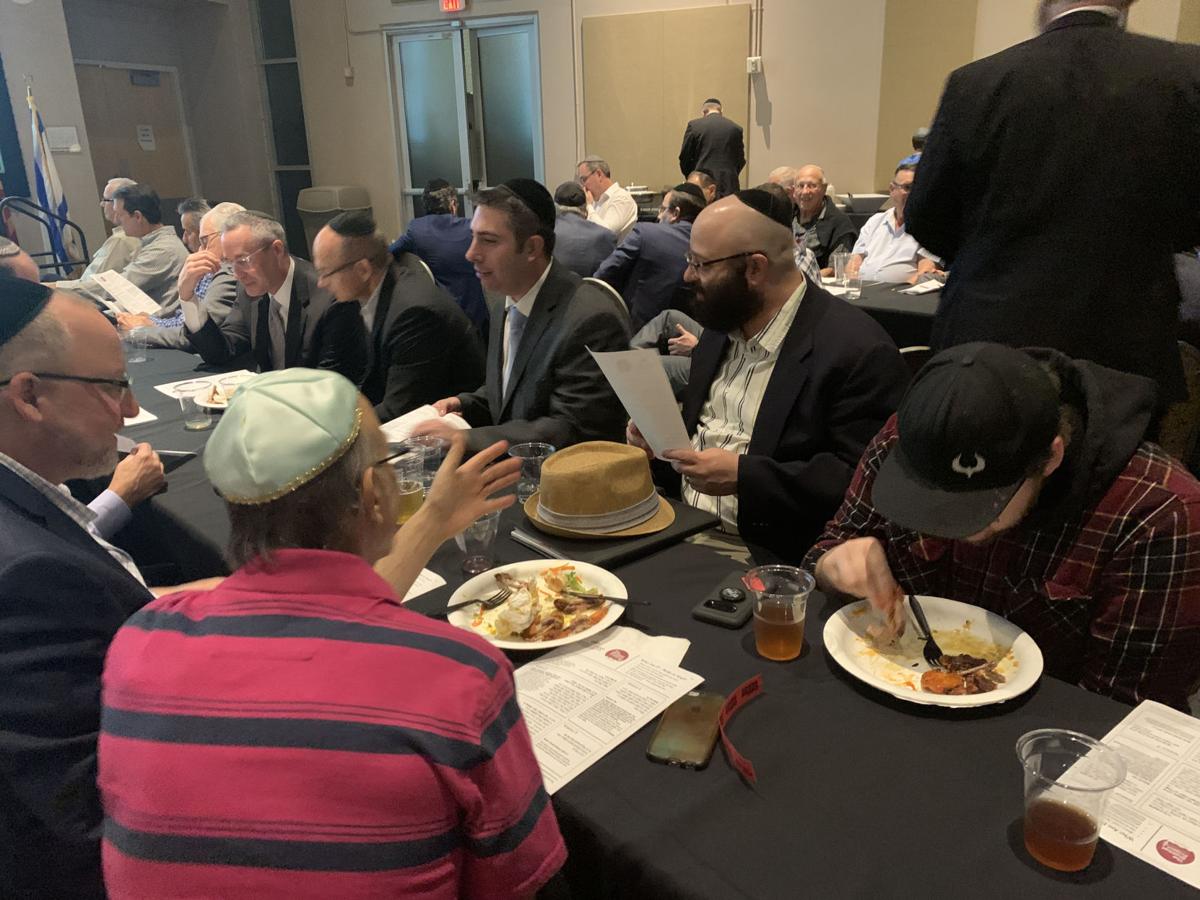 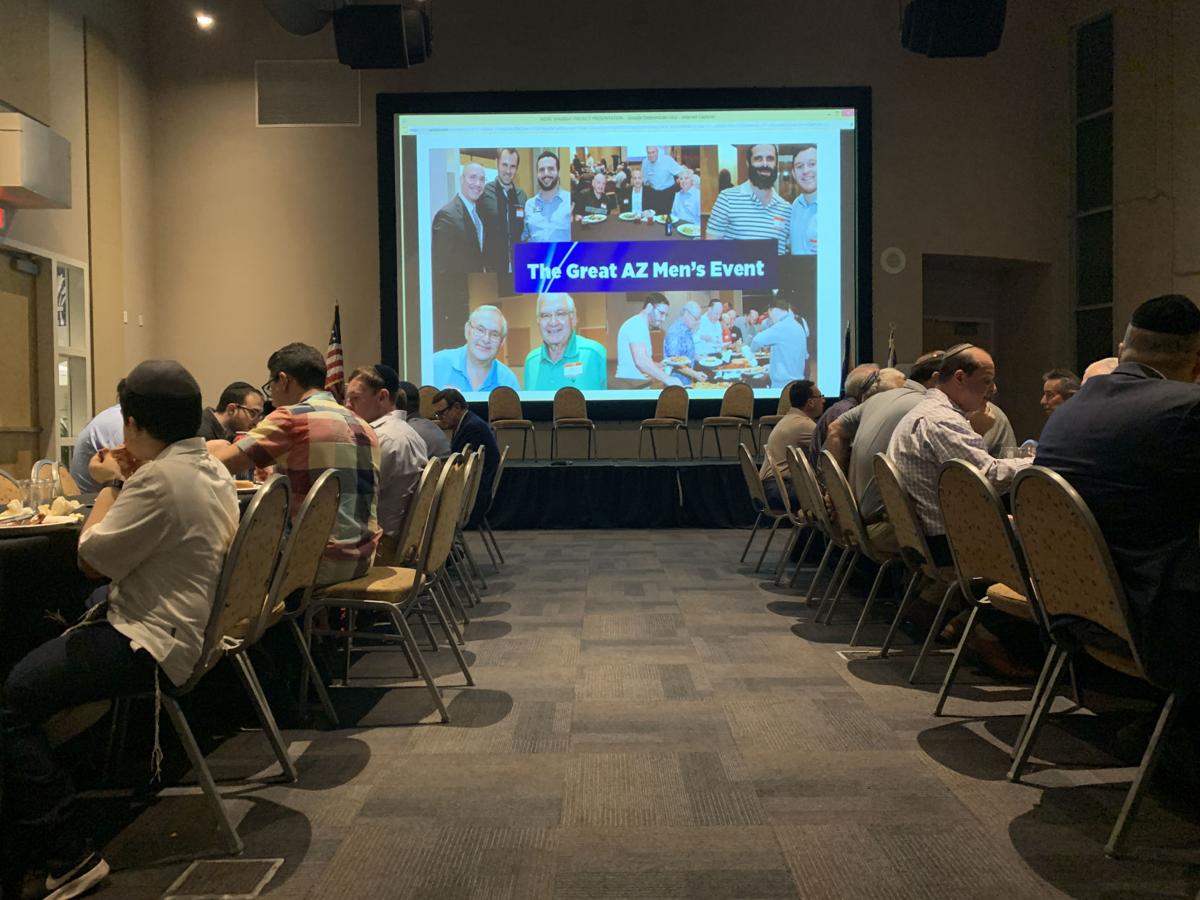 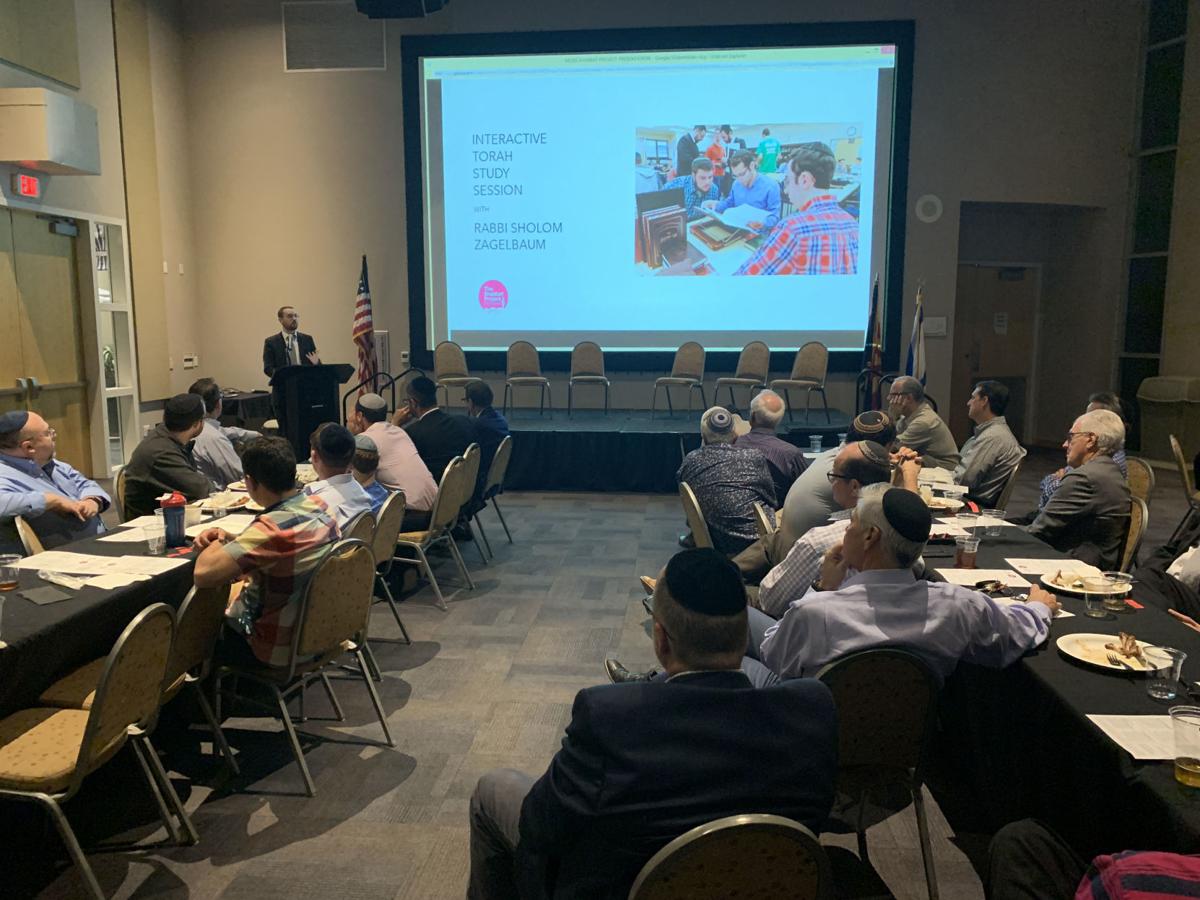 Shabbat Project AZ came to the Ina Levine Jewish Community Campus to encourage brotherhood in business, community and personal life during the second Great Arizona Men’s Event on Nov. 11, as part of a weekend of programming for the worldwide Shabbat Project.

“This movement has transpired into something magnificent,” said Rabbi Leib Bolel on Monday night. “Over a million Jews in 1,511 cities this week will come together in unity to celebrate Shabbat.”

The two-hour event gave men in the Jewish community the opportunity to share a meal, take part in study and hear inspiring stories through JEDx, the movement’s version of TED Talks.

“The Shabbat Project is a global initiative to unite Jews around the magic of Shabbat,” said Bolel. “If heaven is pure spirituality, then Shabbat is a taste of that experience.”

During the men’s event, guests took a deep dive into connecting the body and soul, the tug of war involved in finding balance in life and finding understanding through Shabbat.

The group session concluded with an interactive study of the topics, led by Rabbi Shalom Zagelbaum.

“Who I am, as a human being, is the contact point and merging together of the two worlds of body and soul,” Zagelbaum said to the group, noting that making only the body happy can make the soul miserable, and what makes the soul happy can leave the body behind.

Brick opened the conversation by sharing his experiences as a member of the national Jewish fraternity, Alpha Epsilon Pi, and later as a part of fraternity leadership and how these experiences gave him a better understanding of brotherhood.

Brick said creating connection isn’t something you do casually, or while you’re doing other things. “It’s every single intricate tapestry aspect of your life involved in the same mission,” he said.

Ellis took the stage next to share the story of how the Southwest’s largest virtual “string” eruv came to be, and the last-minute challenge that jeopardized the project. After getting the green light from almost all the governing bodies, the Salt River Pima-Maricopa Indian Community was the only approval they still needed. The permit application was denied.

“If you take one step at a time, even the most seemingly insurmountable odds can be accomplished,” Ellis said. The team was given the opportunity to speak with Diane Enos, the president of the tribal council at the time, and Enos later pushed the permit approval.

“One of the lessons I learned is even if you have the best idea with the best of intentions, unless you have champions that believe in you and your dream and are willing to help you along the way, you’re dead in the water,” Ellis said.

Orthopedic surgeon Gimbel spoke on realistic outcomes in medicine, discussing expectations in procedures, current medical research at the Arizona Research Center and exercising caution regarding medical trends such as CBD and stem-cell therapies.

“If you are confident, the odds are you will succeed,” Gimbel said. “If you’re not, in my opinion, your chances of succeeding are significantly reduced.”

Melmed discussed the history of autism and its classification as a neurobiological disorder before the conversation shifted to understanding the soul and why a scientific approach is not enough.

“There’s a whole lot more that goes into understanding the soul than just neurobiology,” Melmed said. He closed the conversation by talking about spiritual connections in the community.

“That’s the point for tonight, for the Jewish community to try their best to become more inclusive and more compassionate and to break down the barriers which prevent these individuals from living full religious lives in Arizona,” Melmed said. JN