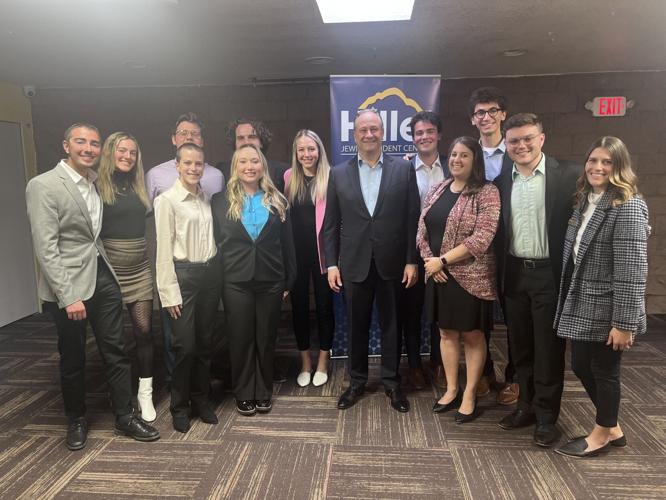 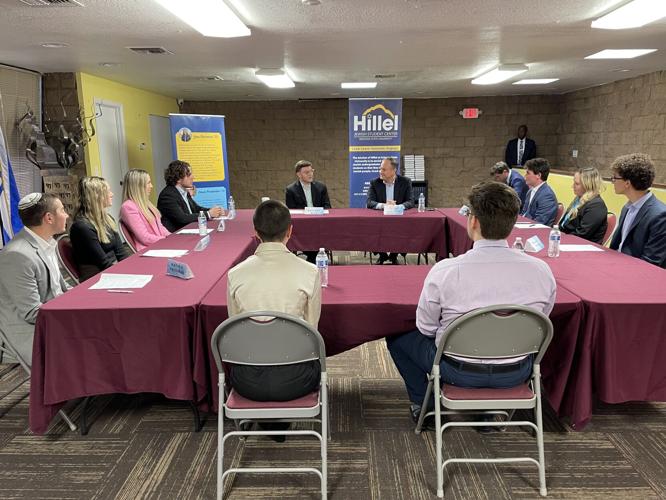 Douglas Emhoff, the Second Gentleman of the United States, made a brief visit to the offices of Hillel Jewish Student Center at Arizona State University to speak directly to college students about antisemitism on Thursday, Jan. 18.

Emhoff joined 10 students, Hillel at ASU Executive Director Debbie Yunker Kail and Hillel at ASU Assistant Director Taylor Silverman, for a 50-minute round table discussion, during which Emhoff invited students to share their personal experiences and how the current climate around antisemitism is impacting them as leaders.

ASU senior and Hillel at ASU Student President Zachary Bell was impressed by Emhoff’s ability to listen to each student’s experience and refer back to what they related when he offered his own comments.

“He made it clear that he heard and respected the experiences of everyone in the room,” Bell told Jewish News.

Bell said several students told Emhoff about how they sometimes feel unwelcome in certain student-led multicultural coalitions and initiatives. Emhoff told them it wasn’t the first time he’d heard similar stories and didn’t think it would be the last.

“It was clear that this is an issue he’s passionate about and that he will take concrete steps to make the global climate better,” Bell said.

Yunker Kail learned of the visit through an email sent to her by a member of Emhoff’s staff on Tuesday afternoon and set about organizing what was intended to be an intimate conversation between Emhoff and a few students.

“His visit was very exciting and we were honored to be selected to facilitate this conversation,” she told Jewish News. “It means a lot that antisemitism is a priority for him, and it means even more that he wants to hear from college students about it and that he chose to visit ASU and hear from the amazing student leaders that I get to work with every day.”

Yunker Kail has been dedicating more of her time recently to providing proactive education about antisemitism. She has added a session in each of Hillel’s classes during which she teaches the history of antisemitism, lets students process their personal experiences and trains them to report incidents.

In addition to an on-campus reporting system, there is ReportCampusHate.org, an online portal to report antisemitic and/or bias incidents targeting Jewish community members on North American college campuses, created through the partnership of Hillel International, the Anti-Defamation League and the Secure Community Network.

“Often, students don’t know that we can help them report incidents, and we want them to know they can come to us no matter how small it is. We want to give them all the resources they need,” she said.

Bell told Emhoff how Hillel works with ASU’s administration to address antisemitic incidents and that students can meet with various deans and administrators to report and discuss any issue.

“I have not had any meetings with deans personally, but I know some students have and during the meeting, I mentioned that I’d like to see those resources be more publicized and utilized — so we can try to make things better,” Bell said.

Yunker Kail hears about incidents in which students know something uncomfortable or inappropriate has happened but can’t quite explain why it upset them. These microaggressions might happen in unguarded moments, such as a conversation between friends. Hillel leaders want to help students understand the experience and coach them on how to follow up with the person who made the inappropriate or offensive comment, or know how to speak up should something similar happen again.

Three separate times in the last few years, antisemitic flyers were posted on ASU’s campus. Each of those incidents were reported immediately to the police, as well as the ASU administration.

However, that’s not representative of daily life at ASU, she said.

“There’s so much to be proud of at ASU and there’s never been a better time to be a Jew on campus. We have wonderful future Jewish leaders, who are very proud of their strong Jewish identity,” she said.

“Antisemitism is a real facet of life, but it’s not the only one, and I don’t want people to end up with a lopsided picture of what it’s like for students on ASU’s campus.”

Emhoff was in town with his wife, Vice President Kamala Harris, who made her first official visit to the state since assuming the vice presidency to attend the groundbreaking of the 125-mile-long Ten West Link transmission line, which will help transport wind and solar energy to the Phoenix area and Southern California.

Emhoff’s meeting at Hillel was closed to the media, but a White House official told Jewish News on background that "Emhoff talked about the importance of living openly as a Jew and the administration’s all-of-government approach to combating antisemitism." It was Emhoff's second time meeting with Hillel students after holding an interfaith roundtable at the vice president's residence last year.

Hillel students and staff were not allowed to announce the visit until the next day’s press release.

Bell said that since they had less than 48 hours between finding out about his arrival and his actual departure, “it was a mad dash to get everything organized,” leaving the students with little time to consider the implications of the Second Gentleman coming to Hillel.

“I had a bunch of classes and the day was such a blur; I didn’t fully realize how cool and important it was until I saw the black Escalades pulling up in Hillel’s parking lot,” he said.

Even after Emhoff departed, the students kept talking.

“We were all so motivated and encouraged by our conversation, and even after he left, we sat and talked for another 45 minutes,” Bell said. He’s hopeful that Jewish student leaders can brainstorm more ways to build coalitions with other minority student groups to create a more unified front on “this epidemic of hate” that affects many minority communities.

While the students were somewhat impatient to tell friends and family about their meeting with the Second Gentleman, they did as instructed and kept it hush-hush, Bell said.