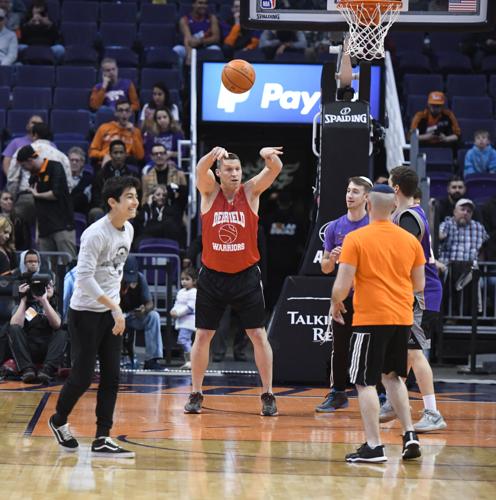 Yanklowitz passes to Crane, in the orange T-shirt, during the special halftime game. 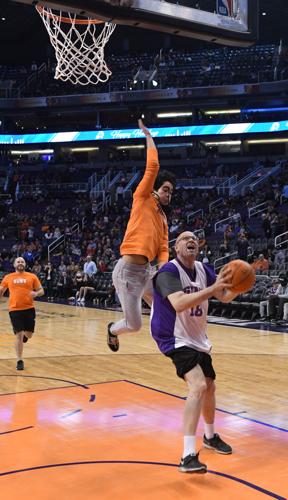 One of the teens playing in the game attempts to block Caplan's shot. 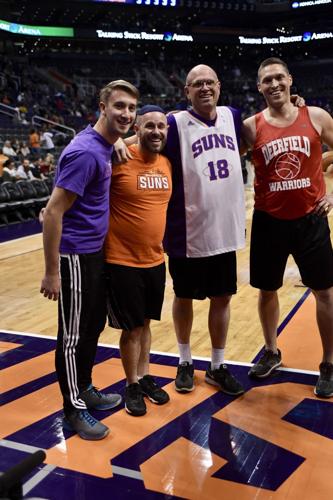 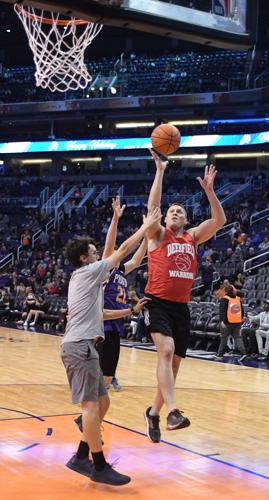 Yanklowitz goes for the layup.

Yanklowitz passes to Crane, in the orange T-shirt, during the special halftime game.

One of the teens playing in the game attempts to block Caplan's shot.

Yanklowitz goes for the layup.

Cantors singing the National Anthem, fans wearing colorful kippahs and an exciting game of basketball between teams made up of rabbis, synagogue leaders and teens highlighted the Phoenix Suns’ Jewish Heritage Night.

“It’s awesome! Playing with the rabbis is something you don’t get to do often, which makes it unique and enjoyable,” Meyerson said. “As soon as I walked onto the court, all I could think about is, This is so amazing. You could hear the crowd cheering and the music blasting in the background. I also felt pride being able to represent my Jewish youth group, NCSY.”

Making the evening that much more special was the fact it took place on the second night of Chanukah.

“For the Jewish community, this is a way we come together,” Caplan said. “All synagogues, rabbis, teens, kids, community members and sports fans celebrated our festival of lights in an NBA arena. The Suns are always so gracious to allow us this opportunity.”

At the direction of Temple Chai Cantor Ross Wollman and Beth El Congregation Cantor Jonathan Angress, the evening started with a choir of 22 children from four local shuls singing Chanukah songs and chanting the traditional prayers to light the candles. Cantor Dannah Rubenstein of Congregation Or Tzion and Cantorial Soloist Emily Kaye of Congregation Kol Ami joined in the singing.

“It was deeply meaningful to celebrate Chanukah and collaborate with the Suns,” Wollman said. “The main reason I do it is to witness the look of awe on the children’s faces. Singing on the court means so much to them.”

The children’s’ choir was followed by Wollman, Angress, Rubenstein and Kaye singing the National Anthem.

“It was an honor and a pleasure to participate in this fun event,” Kaye said. “Singing the National Anthem with my colleagues was an experience to remember.”

Adding to the festivities were the souvenir Suns yarmulkes given to members of the Jewish community who had bought their tickets through a special program.

The Jewish community has enthusiastically supported the Phoenix Suns since the team’s founding in 1968. That support included allowing the Suns to practice at the old Jewish Community Center from 1976 to 1992, when it was located on Maryland Avenue. Today, Robert Sarver, a member of Temple Chai, is the principal owner of the team, having purchased it in 2004.

Even though the Suns lost to Sacramento, 122-105, Yanklowitz said the evening was very significant to the Valley’s Jewish Community.

“It is always wonderful to see community institutions respond to the diversity of the local population. It not only makes these populations feel special, but it recognizes that our community is actually a quilt with many threads that make a beautiful whole,” he said. “The fact that the Suns host a night dedicated to the Jewish community during Chanukah is so special, as it fosters so much warmth within and between Jewish Phoenicians and our gentile neighbors. At times of national division and growing acts of hate for those  who are different, we need to come together to celebrate one another.” JN