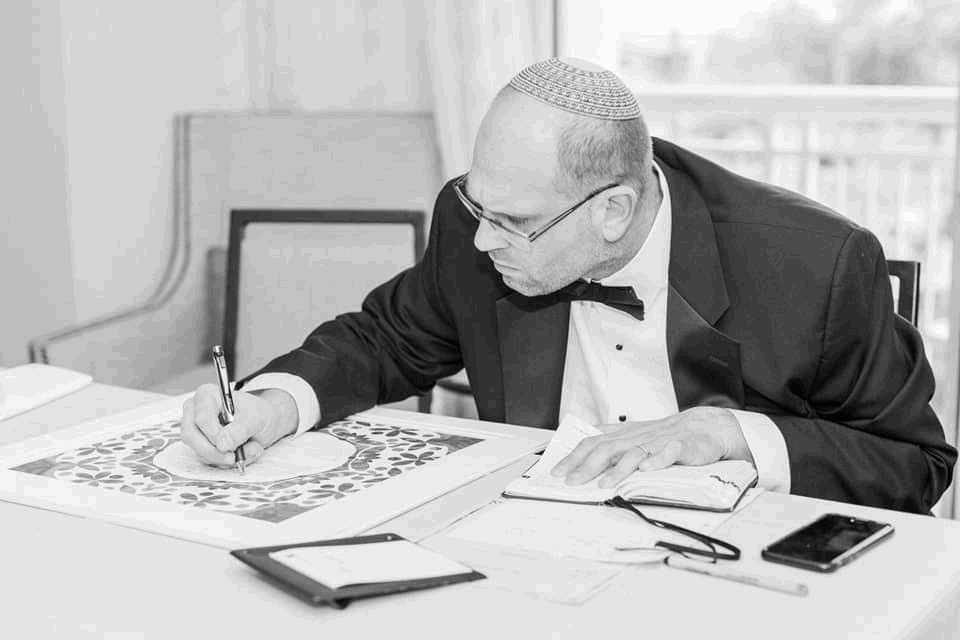 Rabbi Micah Caplan signing a ketubah at a congregant's wedding. 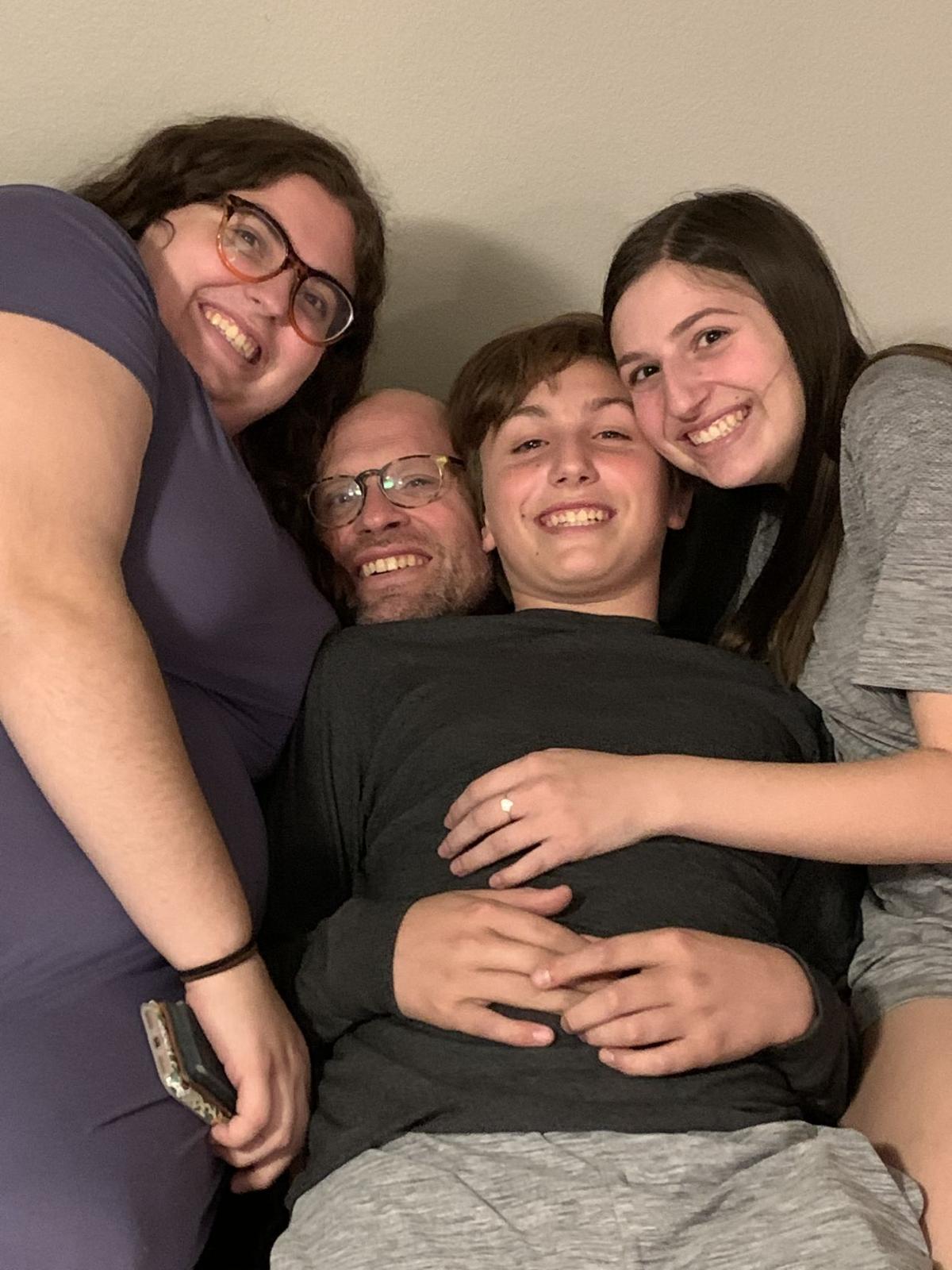 For some people, a good rabbi is defined by a piercing intellect; for others, a good rabbi must have compassion for those who are suffering. Rabbi Micah Caplan, the spiritual leader of Congregation Or Tzion, had both those qualities — as well as a magnetic personality and the ability to talk as fluently about basketball and baseball as he could about the Torah.

Sadly, Caplan died on June 14 in Scottsdale of a cardiac event. He was 44.

Born in Los Angeles, Caplan grew up in Phoenix where he seemed to know from an early age that he would be a rabbi. At the funeral service held in Congregation Or Tzion’s sanctuary, June 16, his mother, Tina Caplan Weiss, recounted how on many Shabbat mornings before shul, she would hear him in his room giving sermons to a congregation of stuffed animals he’d gathered on chairs.

His first pulpit was in a small synagogue in Arcadia, California. From there he moved on to a larger one in Miami, Florida.

“He was looking for a growth opportunity,” said Linda Moskowitz, Or Tzion board member, past president and longtime family friend.

An opportunity for a rabbinate near his extended family presented itself in 2010 when Moskowitz, then on the board of directors and search committee at Or Chadash, encouraged him to apply for an opening.

He arrived with his then-wife Michelle and their three children, Brianah, Julia and Avi, and seemingly overnight, the congregation more than doubled.

“It was mostly him and his charisma,” said Alison Feinberg, friend and at-large member of Or Tzion’s board of directors.

A common refrain of colleagues, congregants and friends was that Caplan had presence. People gravitated to him, even after a first meeting.

Frank Jacobson, Or Tzion’s administrative vice president and longtime friend, remembered people very specifically saying they wanted to be part of Caplan’s congregation. Even Jacobson felt the pull while still a member at Har Zion. Upon attending a third Shabbat service of the rabbi he had once known as his son’s friend preparing for their bar mitzvahs, Caplan gently chided Jacobson it was probably time to become a member. He did just that — keeping membership in both synagogues.

In 2014, Or Chadash merged with Har Zion to form Congregation Or Tzion. While some congregants moved on, most stayed, and Caplan — who gravitated toward opportunities to build and create — realized the growth he had sought.

And he didn’t take any of his congregants for granted.

Famous for his powers of recall, he knew the details of members’ lives and took the time to get to know them, to be with them for the big moments, celebrations and disappointments. In the weeks before his death, he was making phone calls checking to see how his congregation was coping with the ongoing pandemic.

Beyond the personal connections he made, Caplan was also admired for his teaching skills.

“He was so brilliant, with a memory that was so sharp,” Moskowitz said. “He connected dots that people would never connect — he could always relate something from Torah to real life.” He didn’t hesitate to test his congregation, and he pushed them sometimes past their comfort level.

That’s why, Feinberg said, Caplan was her rabbi.

“He believed that women and girls can do anything,” she said, remembering the first time she saw a girl lift the Torah. It was Caplan’s daughter, Brianah, who is planning to become a rabbi. Feinberg was impressed but didn’t think she could do it herself until one quiet morning when Caplan looked out to the congregation, spotted her, made eye contact and called her to the bimah to lift the Torah. She surprised herself by being able to do it, but Caplan was just giving her the push to do what he knew she was capable of all along.

“He was a master teacher, a master storyteller,” Moskowitz said. “People could listen to him for hours, and people were just so attracted to that.” While some of his lessons were informal, he also was a scholar and loved his job as a mentor and colleague.

Rabbi Zari Sussman, who joined the congregation six weeks ago, said she was a longtime admirer of Caplan and expressed her sorrow that although still able to read his sermons, she won’t be able to learn more from him in person.

“He explained things at length,” she said. “He was patient, kind, very menschy, very unguarded — it’s a huge loss.”

Mitch Ross, president of Or Tzion, agreed that Caplan derived pleasure from teaching.

“Life cycle events and teaching are what he loved,” said Ross. “Helping people deal with life’s challenges was his forte.”

While watching the funeral, he pondered the role Caplan played in the lives of those grieving: “To go through this without him to help us, to comfort us, seems impossible. He was our community’s go-to person in times of need.”

Caplan started the synagogue’s chevra kadisha several years ago and asked for volunteers from the community.

“It was a beautiful way to help a family bind its wounds,” said Jacobson. “That was his life — that was what he did for us.”

Caplan’s magnetic and jocular personality, along with his well over 6-foot frame, was often spotted around Greater Phoenix as he participated in many Jewish organizations’ events. His friends and colleagues tried to slow him down — to convince him to take time for himself. But he seemed incapable of it. Caplan was devoted to his family and his life partner, Gabi Chojkier, but he was devoted to his congregation, community and friends as well.

“He put everybody else first,” said Moskowitz, who joked that she would yell at him for doing too much. No matter what the event was, Caplan saw it as important enough for him to help out. Making sure everyone was happy was one of his prominent characteristics, and he would go out of his way to ensure people had what they needed.

At Caplan’s funeral, his daughter Brianah said her father “spent his entire life giving pieces of himself to those around him. Some days I would worry that he gave too much away and that he forgot to keep some pieces for himself, but there was no stopping him.”

Immediately upon news of Caplan’s death, Jewish organizations, synagogues and rabbis from all over Greater Phoenix released public statements and letters via email or social media to announce their shock and grief.

While Caplan’s funeral was physically attended by family only, it was broadcast live on Zoom. More than 1,200 log-ins were registered representing a countless number of people wanting to join in solidarity to mourn the loss of their rabbi and their friend.

Feinberg, whose heart is broken, reflected on his final Shabbat.

“My family logged into services, and it was so joyful, and he was in the best spirits,” Feinberg said. “We had fun, and we laughed. That was the shock. That last Shabbat — he looked like he was in his element.” JN