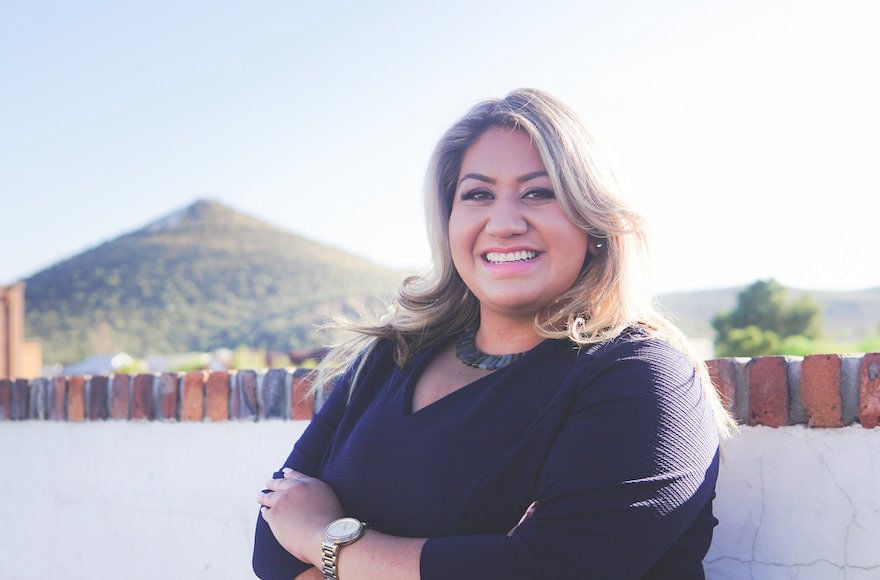 Alma Hernandez is a Mexican-American Jewish millennial and daughter of immigrants who founded a progressive Jewish group in Tucson and is running for the Arizona House of Representatives. 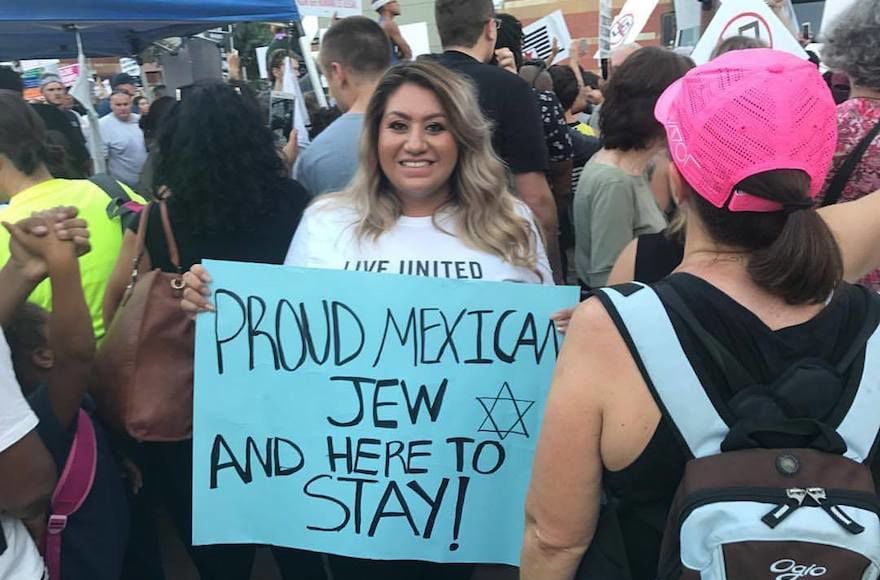 Hernandez takes part in a protest against the policies of President Donald Trump. 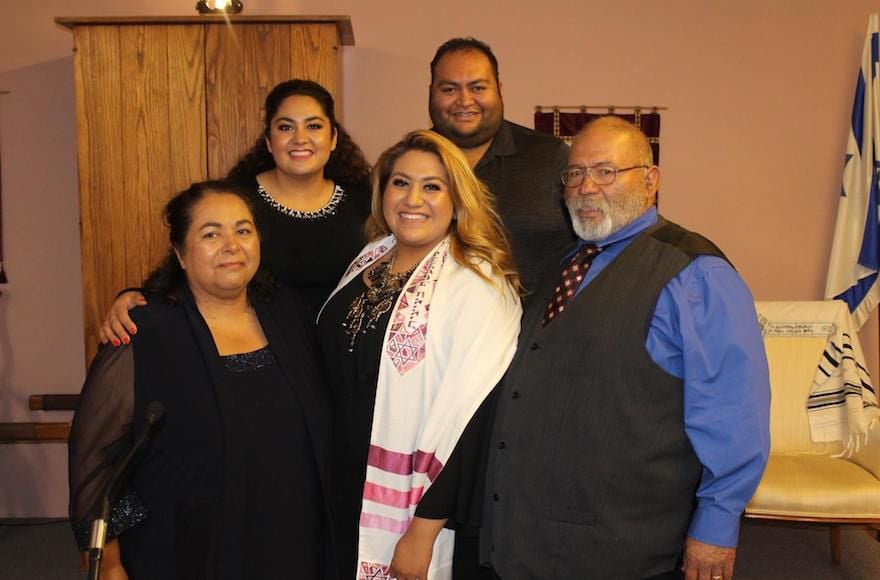 Alma Hernandez, center, celebrates with her family after a ceremony in which she was given her Hebrew name, Malka.

Less than one day after Alma Hernandez began a Jewish fundraiser for migrants on Arizona’s southern border, she had an SUV full of food, diapers and hygiene products ready to donate.

Hernandez loaded the vehicle with goods bought with donations on a Wednesday afternoon. The following day, she would drive them all down to a migrant shelter in Nogales, Mexico, on behalf of Tucson Jews for Justice, a progressive activist group she co-founded in March.

Hernandez, 25, is not the only Jew trying to help families crossing the border. But for her, the work is personal. Hernandez’s mother is from Nogales, a city adjacent to the border that serves as a gateway into the United States. When she talks about undocumented immigrants, in some cases she’s talking about her own relatives.

“I have family members who are here undocumented or as Dreamers, so any time I see things going on, it affects me and it hurts,” she told JTA, using the term that refers to undocumented immigrants who entered the country as minors. “As the Jewish community and as Jews, we should be the first ones saying anything.”

Despite her young age, Hernandez has gone through an eventful personal and professional journey to becoming a Jewish Latina activist who places both of those identities at the center of her work. Now she’s trying to break another barrier — running for state representative in a district representing part of Tucson. If she wins, she will be the first Hispanic Jewish woman to hold elected office in the state, if not the country.

“When it came to issues like immigration, when it came to issues like refugees, I can give my opinion and come at it with a different perspective because as a Jewish Latina and the daughter of an immigrant coming from Mexico, I can share perspectives, experiences from my family,” she said. “It’s a great opportunity for me to build those relationships within the Hispanic and Latino community, and also introduce to members of the Jewish community.”

Just like Hernandez can help local Jews connect to their Latino neighbors, she has reassured Latino acquaintances that local Jews support their fight against strict measures on the border — including the recent family separations.

But she would like to see the established Jewish community become more active in the fight. Part of the reason she founded Tucson Jews for Justice, she said, was because she saw a need for a Jewish channel for progressive activism outside of mainstream organizations.

“We are immigrants, too, and it’s hurtful when I don’t see the Jewish community standing up and saying anything,” she said. “I understand a lot of times it’s the political aspect of it. We don’t want to piss anyone off and we want to stay neutral. But I think there are times when we can’t afford to stay neutral. And there are times we have to stand up and say this isn’t right.”

Born to a nonreligious family in Tucson, with a Jewish maternal grandfather, Hernandez began embracing her Jewish heritage in high school. She felt at home at Jewish services, and her second job was working with adults with special needs at the local Jewish community center. Attending college at the University of Arizona, she was active at Hillel and served as president of the campus pro-Israel club. She connects to Judaism’s imperative to pursue social justice.

In 2015, she made it official, converting at Congregation Chaverim, a Reform synagogue in Tucson. She had an adult bat mitzvah ceremony two years ago.

“I felt like helping others and uplifting other people was something I really, truly cared about,” she said. “I kind of felt also like I was honoring my family’s history. I felt like it was something that was special to me. My mom cried a lot. She was very emotional about it.”

Beyond being supportive of the process, her family has eagerly participated — sometimes to her surprise. When her parents said they would host a ceremony celebrating her adoption of a Hebrew name, Malka, she expected an intimate affair. Some 100 people showed up.

“My dad told me if I want to start something, I have to finish it,” she said regarding the conversion. “In Hispanic culture, we’re very big on celebrations and parties, so of course everything was always a big party.”

Politics is also a family affair. Hernandez first became involved in local campaigns as a teenager, when her older brother, Daniel, took her to volunteer for Terry Goddard, the 2010 Democratic nominee for governor. The next year, Daniel was the young intern credited with saving Rep. Gabby Giffords’ life when she was seriously wounded in a mass shooting. He applied pressure to her wounds until paramedics arrived.

Hernandez comes off — at least on the phone — as effusive and energetic. But the experience that drove her to a political career was traumatic. When she was a high school freshman, two older students began making fun of her sister’s hair and then fighting with her. Hernandez recalls that police who were on campus interceded and slammed her to the ground, causing long-term damage to her spine, back and nerves. She now gets treated in the hospital several times a year.

“One day I was an honors student, the next day I was a criminal,” she said. “If that wouldn’t have happened, I probably wouldn’t have been as involved or as passionate as I am now. The only way to change what happened to me is to stay involved.”

Hernandez has a surprisingly broad range of experience for a 25-year-old. She has served as campaign manager in races for state representative and county attorney; senior organizer for Arizonans United for Healthcare, which helped people access Obamacare; and as a delegate for Hillary Clinton at the 2016 Democratic National Convention. She also went on short-term missions to Ghana and Panama in 2012 and 2014, respectively, to provide medical care to rural areas.

Before announcing her run for office, and while she was earning a master’s degree in public health, Hernandez served as the coordinator of Tucson’s Jewish Community Relations Council, which acts as the local Jewish voice on political policy. And she’s been active with both the Anti-Defamation League and AIPAC, the pro-Israel lobby.

“Alma is an inspiration on so many levels,” said Stuart Mellan, president of Jewish Federation of Southern Arizona in Tucson. “As an individual, she’s a powerful young woman. … If at any one time you ask her what she’s doing, she’ll give you a list of three full-time jobs.”

As a self-identified progressive, Hernandez says she gets the most flak for being pro-Israel. But she still embraces the fight, writing an unapologetic letter this month defending Israel’s recent actions amid clashes on the Gaza border.

“They want us to choose: You’re either pro-Israel or pro-Palestinian, and it’s very difficult,” she said, referring to herself and her siblings. “We consider ourselves progressives. We care about everyone, and it’s a very difficult time right now to be someone who stands up for both.” JN