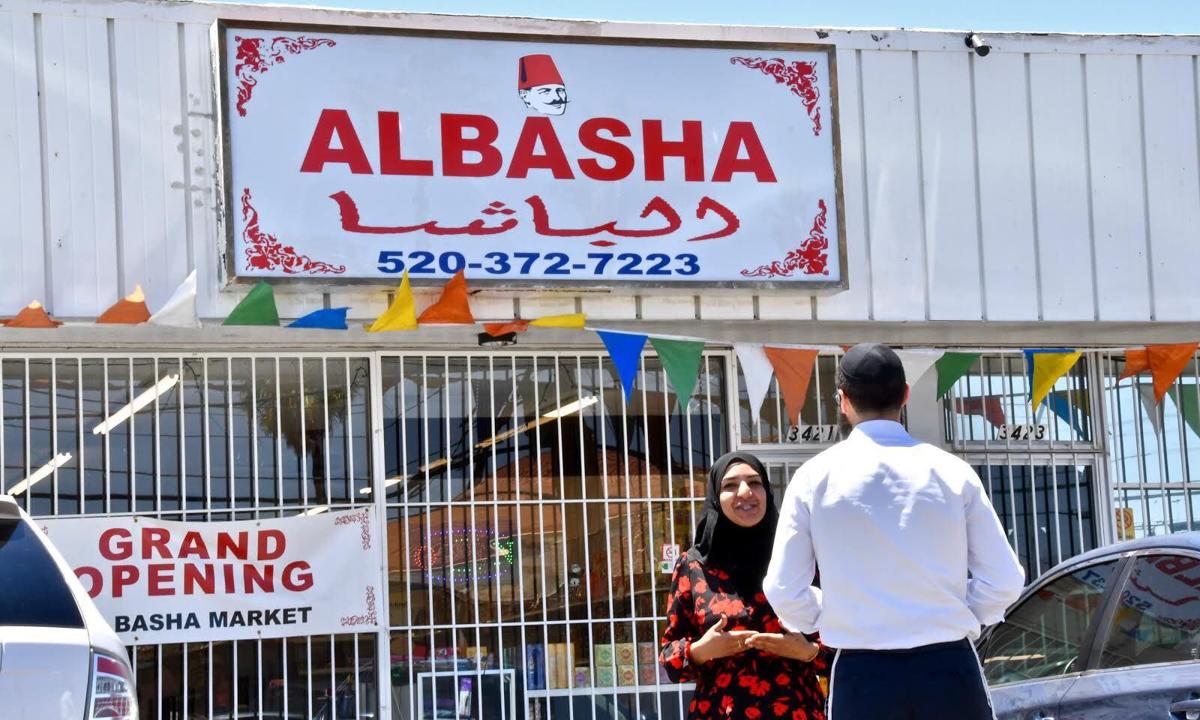 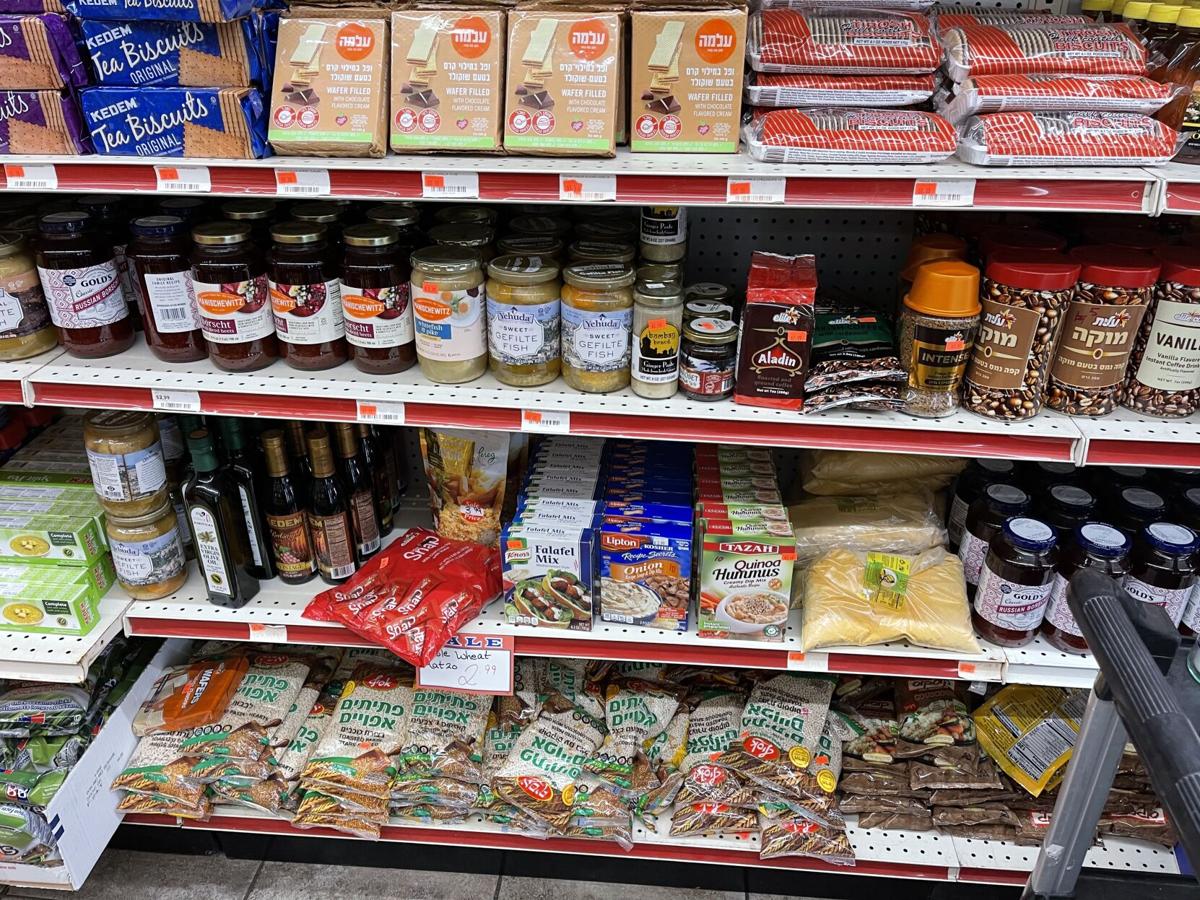 Tucked between a dance school and a 60’s retro lounge on a quiet street in Tucson, sits a small Middle Eastern and African foods store. But Al Basha Grocery isn’t just a place to get kosher meats and hard-to-find ingredients.

“It provides an opportunity for people to see each other as real people, and have a normal interaction with people who ordinarily might not interact in their day-to-day lives,” said Jesse Davis, a regular Al Basha shopper.

Ghufran Almusawi and her husband Anas Elazrag, both Muslims, opened Al Basha in July 2019 with the intention of creating a “melting pot,” Almusawi said.

“Serving kosher in our store was one of the ways that we can bring the communities together,” she said. “We just want to offer services to everybody; we want to make everybody feel welcome.”

And she regularly witnesses dialogue between the Muslim and Jewish customers who come in.

“I see a lot of customers interacting with each other, especially if they have questions,” she said. “Sometimes the customers will jump in and answer as a way of them showing, ‘Hey, we accept you, you’re welcome here.’”

Al Basha caught Davis’ eye before it even opened, with its big sign advertising halal and kosher foods.

“A halal, kosher store — somebody who’s actually trying to reach out to both markets and both communities? That’s pretty striking,” he said. “They were definitely reaching out a hand.”

Davis appreciated the gesture and has been shopping at Al Basha about three times a month since it opened.

“They’re super friendly and helpful,” he said. He’ll often get recommendations on products and spices to use in recipes.

Davis’ favorite thing to buy at Al Basha is pomegranate molasses, which he described as “a sort of finisher” for meat, giving it a “sweet, tangy flavor.”

Sigafus appreciates the store’s efforts both to meet the need for kosher foods and to foster dialogue and relationships between the Jewish and Muslim communities.

“One time I was in there and the woman there did not have other customers, so we had a wonderful conversation about kosher products, keeping kosher, halal, what I personally do, and how I cope and how she copes, and we had a wonderful little chitchat time,” Sigafus said.

Sigafus said that kind of person-to-person conversation is beneficial, no matter how much exposure somebody has already had to different cultures.

Elazrag, a doctor, came to Tucson in 2008 from Sudan. He decided to open Al Basha after he had a poor shopping experience, Almusawi said.

Her husband wasn’t convinced existing local markets had what people really needed or that they could make all customers feel comfortable.

Almusawi, an Iraqi-American, grew up in Michigan and was already familiar with the grocery business.

“My dad was in the grocery world and he was always so happy to see his customers and was welcoming. He didn’t really look at a customer as being somebody other than a human that he’s providing a service for. He didn’t look at race, color, religion, none of that. And I kind of grew up following that. And fortunately, my husband’s the same way.”

“I just don’t think they feel comfortable coming in," she said. “I’ve had people come in and say, ‘How could you do this? How could you sell this right now? And I’m just like, ‘OK, this company (kosher food supplier) in California has nothing to do with it. We're just one business supporting another.’”

She tries to focus on the positive responses and those showing support for unity.

“What both religions teach is peace,” Almusawi said. “We’re welcoming of everybody. We don’t want to make anybody feel uncomfortable and anybody is welcome to shop. And if there are any items that are missing that they are looking for, we’re always willing to bring it in.”

Al Basha is in Yisrael Bernstein’s regular shopping rotation. He usually makes an “east side loop” on Fridays gathering food for several Chabad rabbis. He stops at Al Basha, Trader Joe’s and then Costco. It can take up to six hours, depending on who joins him.

He discovered Al Basha a couple of years ago “on a lark,” figuring that if they sold halal food they might also have kosher items, “and sure enough, they did.”

He got to be very friendly with Almusawi and she began making sure the store carried his favorites: corned beef, pastrami and hot dogs. With his long beard, his black hat and his long coat, he always feels welcome.

“I really do. It makes my whole Shabbat weekend,” said Bernstein, who is also a medical doctor.

Al Basha is “not going to save the world,” said Davis, but it’s those little bridge-building exchanges that can.

“We can’t just reduce each other to what we see on television,” he said. “For all the differences that we might have, maybe we just have more in common. And you get a chance to see that in a really human context — you’re shopping for what you’re going to put on your family’s table.” JN