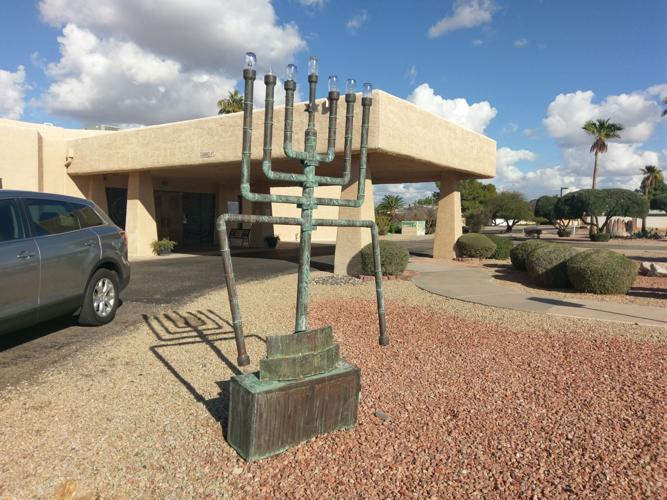 The large outdoor menorah at Temple Beth Shalom in Sun City was vandalized last December, along with the synagogue’s Holocaust memorial. photo courtesy of David Katz 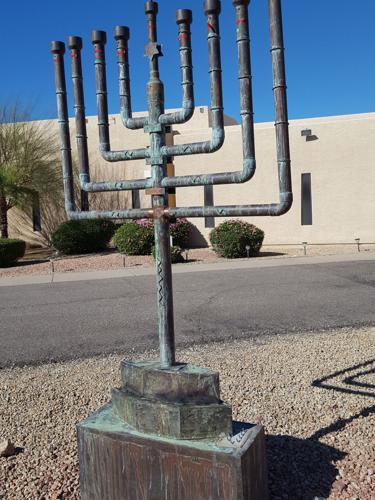 The large outdoor menorah at Temple Beth Shalom in Sun City was vandalized last December, along with the synagogue’s Holocaust memorial. photo courtesy of David Katz

Amid a rash of high-profile anti-Semitic incidents and vandalism in the Valley last winter and spring, one incident stood out due both to its brazenness and the severity of the damage.

On the morning of Dec. 25, the first day of Chanukah, a board member of Temple Beth Shalom and the Jewish Community Center of the Northwest Valley in Sun City noticed deep tire marks next to the synagogue’s large outdoor menorah. It appeared that a truck had rammed into the base. Two of the outside arms of the menorah were twisted downward. The vandals also kicked over the synagogue’s Holocaust memorial, yanking out electrical wires and bending the copper that had names of concentration camps on it. There have been no arrests in the case.

Temple Beth Shalom quickly raised money from the community to heighten security on the synagogue’s grounds — security that is now being used during High Holiday services.

“This security upgrade was obviously done as a result of the vandalism, but we’ve always been somewhat cautious and had armed policemen on High Holidays,” said Temple Beth Shalom Rabbi Shelley Moss. “But now, we always have a police presence or at least a car and a guy in a uniform.”

Synagogues throughout the Valley have traditionally raised their security measures during the High Holidays, but due to the rise in anti-Semitic incidents across the Valley and country, more resources are available for tracking threat levels and offering security plans.

In the Valley, the Jewish Federation of Greater Phoenix hired a security consultant before the recent spate of anti-Semitic incidents took place to enhance security at the Ina Levine Jewish Community Campus. After upgrading the campus’ security, the consultant was made available to synagogues and other Jewish organizations.

“We’ve initiated what we are calling the Community Safety Initiative, where we meet regularly with several representatives from synagogues here in the community and we discuss security issues and some solutions,” said Jim Wasson, the Federation consultant who spent almost 30 years working for the Scottsdale Police Department. “We try to do some networking and we’re developing some ongoing training. Some of the synagogues already have their security plans in place.”

Among the security tools available to synagogues is the Secure Community Network (SCN), a nonprofit organization created in 2004 by the Jewish Federations of North America to disseminate Homeland Security initiatives and provide security consultation to a variety of Jewish organizations.

SCN’s website offers a variety of security tips and plans that synagogues may use as templates to build or enhance existing security tactics. The website also offers nationwide alerts and warnings.

The Anti-Defamation League (ADL) recently partnered with SCN on a nationwide security briefing for Jewish community institutions in advance of the holidays. The call provided communal leadership and security personnel with training and resources for preparedness and featured remarks from ADL, SCN and U.S. Department of Homeland Security experts.

For Valley synagogues, Wasson said he and leaders from the Jewish community are building a communications platform through which synagogues can connect and pass along security suggestions or threats. Also in the works, Wasson said, is a community training program. He added that a large meeting between leadership from local synagogues and a SCN representative proved very productive.

“The most important thing is networking,” Wasson said. “The experience from some of the other synagogues and the people who have been in leadership positions for many years and understand the community is very important.”

Combined with his years of experience in police work, “we kind of mixed that together and then we were able to formulate and make a consensus on what we think could be an issue and how we address it.”

While Temple Beth Shalom did not reach out to local synagogues for security tips, it did gather information from the Union of Reform Judaism and the Central Conference of American Rabbis.

After the Dec. 25 incident, Temple Beth Shalom installed more surveillance cameras and increased lighting. The synagogue is also installing bollards in front of its main doors, according to David Katz, temple vice president.

“One of our members is a Phoenix police officer and he was able to get [city of Phoenix] Homeland Security to do a building audit for us and they came up with a good number of suggestions that we’re trying to implement and finance,” Katz said. “This has always been a welcoming community, and we have not had problems during services or anything that would harm anybody in the building. We had this one episode and it was off hours on Christmas Day, and what I like to think is that it was an anomaly and not a trend.” JN