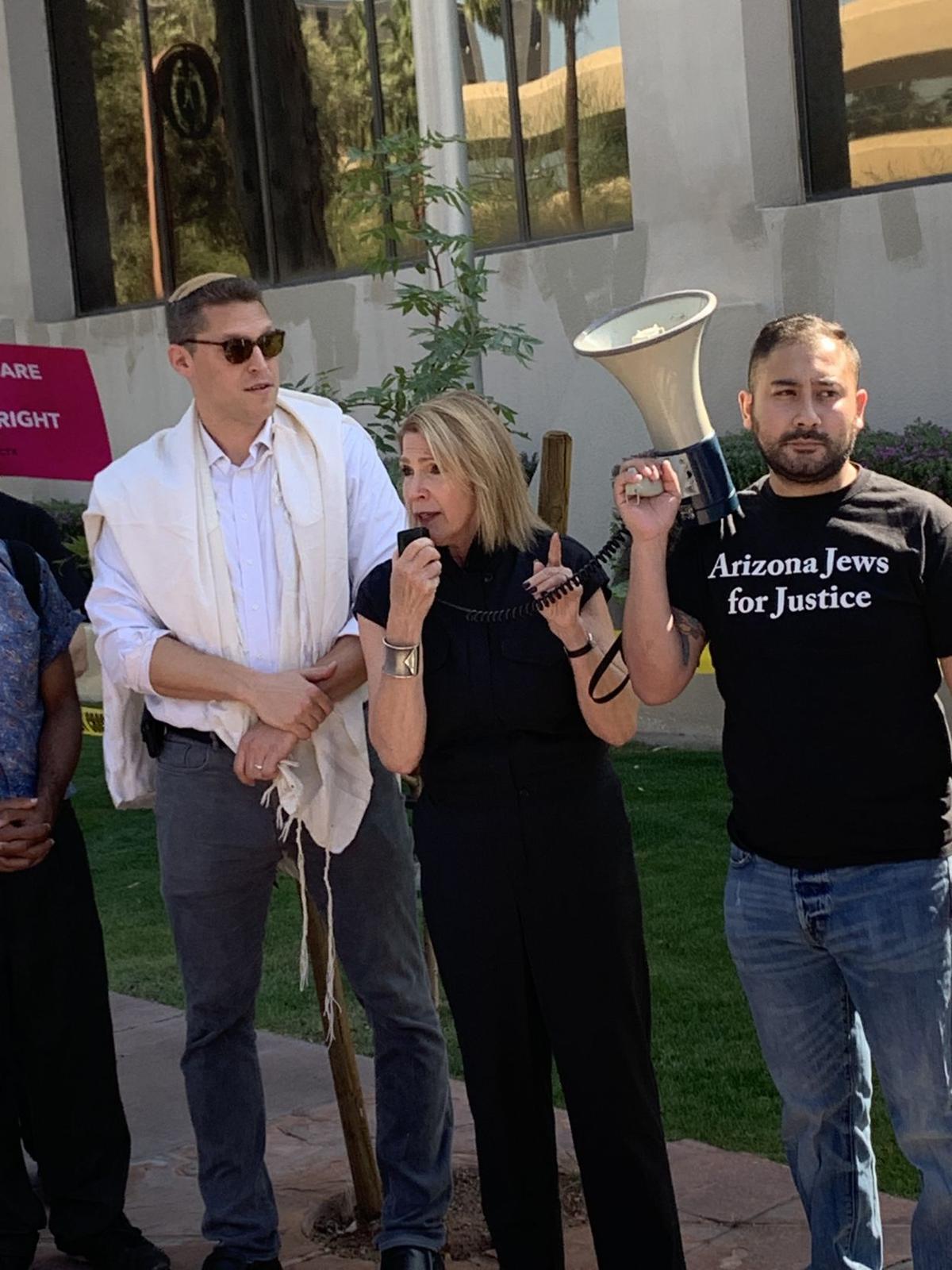 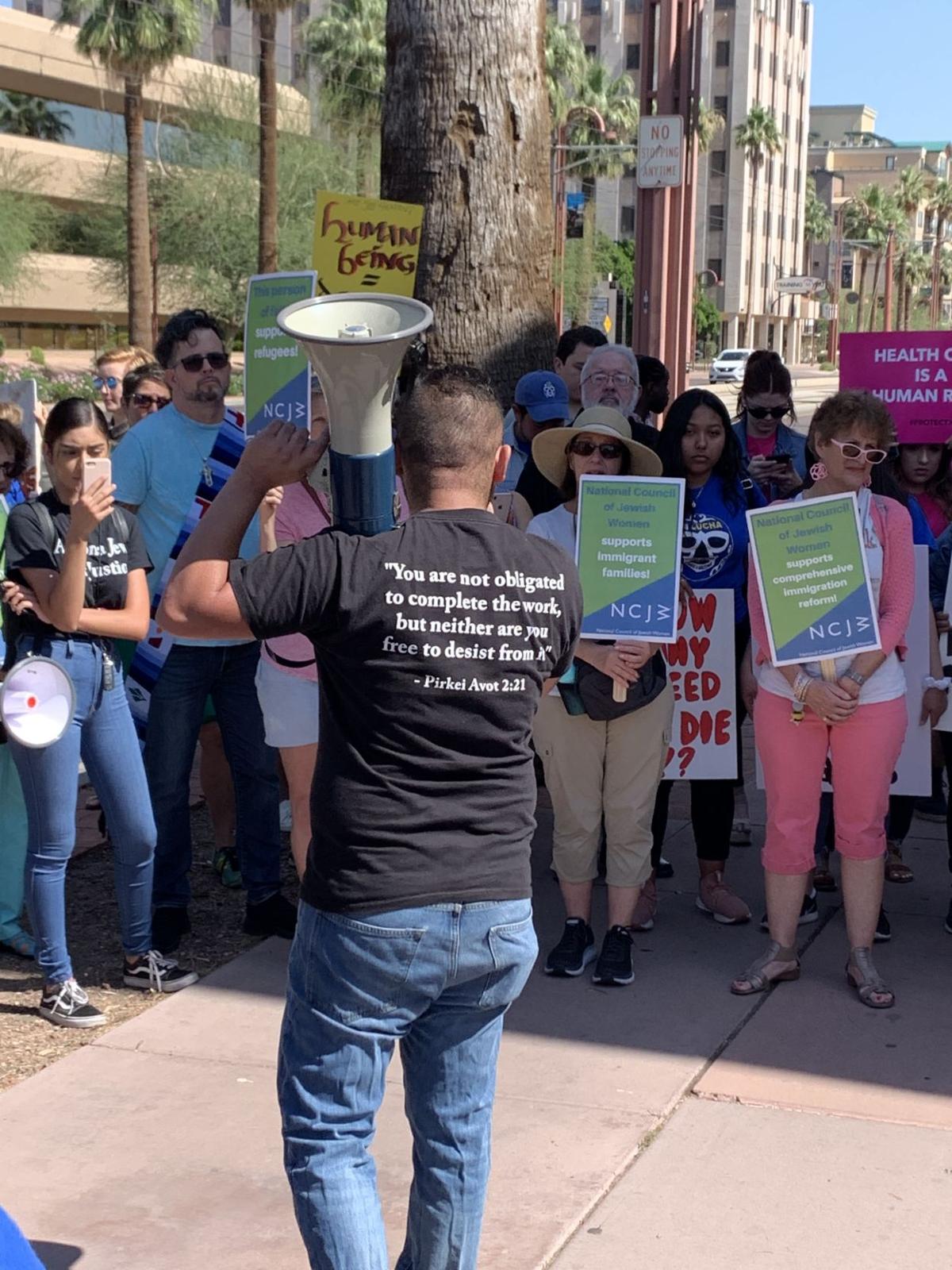 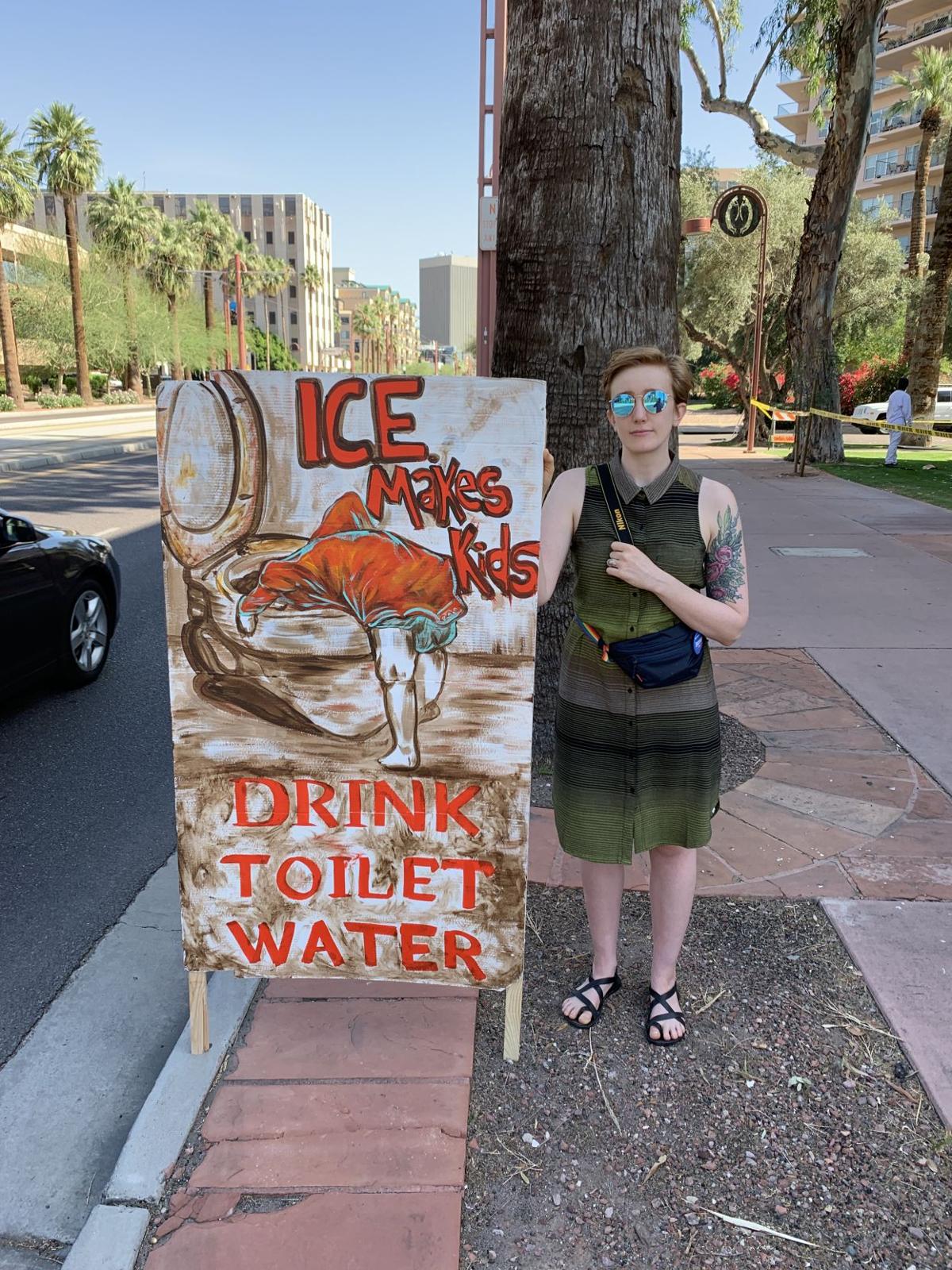 For Eddie Chavez Calderon, campaign organizer of Arizona Jews for Justice, the “We All Deserve Dignity” rally outside ICE’s downtown Phoenix field office on Tuesday, June 4 was held moral reasons rather than political ones.

“We felt that we must act now,” Chavez Calderon said to cheering rally-goers as they circled around him. “We must call on the administration and the systems that have been put in place that neglect the dignity of simple medical care for asylum-seekers.”

AJJ, a project of Valley Beit Midrash, organized the rally with other social action groups to protest those who have died in ICE custody under the current administration, including six children. Attending the rally were representatives from the National Council of Jewish Women of Arizona, Living United for Change in Arizona, Planned Parenthood and First Church UCC.

With an estimated 80 protesters, the social groups demanded that ICE be held accountable for the medical negligence asylum-seekers have experienced in custody.

Recently, Johana Medina, a 25-year-old trans woman from El Salvador, died after being held for weeks in ICE custody. Her name, as well as several others, was mentioned at the rally.

“This is yet another unfortunate example of an alien who enters the United States with an untreated, unscreened medical condition. There is a crisis at our southern border with a mass influx of aliens lured by the lies of human smugglers who profit without regard for human life or well-being,” he said. “Many of these aliens attempt to enter the United States with untreated or unknown diseases, which are not diagnosed until they are examined while in detention.”

Chavez Calderon, a DACA recipient, brought other immigrants to the rally to share their own experiences. Blanca Collazo, a youth organizer for LUCHA and a DACA recipient, shared her family’s story of crossing the border.

“I remember that crossing the border was really difficult. It took three times just to get here,” she said.

She added that the struggles faced by young asylum-seekers now makes her own story pale in comparison. “It’s hard to imagine the children in cages now, because that could’ve been me. Or it could’ve been someone I care about.”

Chavez Calderon was pleased with how the protest went. “Our rally was powerful, direct and impactful. We shared stories and pleaded for simple human dignity. Our rally goes to show that no matter race, gender or ethnicity, we stand together united against medical negligence under ICE custody.”

“The National Council of Jewish Women’s mission is to safeguard the rights and freedom of women, children and families,” Tamarkin told the protesters who accompanied her. “It is the abuse, the neglect, the inhumane conditions that lead to children sleeping on concrete slabs.”

Tamarkin then referenced an NBC report about ICE in Texas leaving children in vans for up to two days during reunification processes.

Before 2018, there were no reported deaths of children in ICE custody. In January of this year, it was reported that 22 people had died under ICE custody from 2016 to 2018. The number of asylum-seekers who have died after being apprehended or put into custody currently remains unclear.

At the rally, protesters held signs with statements such as, “Healthcare is a human right,” “Babies are dying in ICE custody” and “ICE makes kids drink toilet water.” One sign had pictures of five of the six children who died.

“We hope that the Jewish community becomes more aware of the tragedies happening right here in our state and in our portion of the country,” Yanklowitz said. “Every day, there are new reports of the horrible conditions that asylum-seekers have to endure once they reach our borders.”

Yanklowitz also suggested that there were many ways Jews could get involved. AJJ has been assisting thousands of asylum-seekers with food, supplies and travel arrangements since December 2018.

In May, more than 144,000 migrants, including more than 11,000 unaccompanied children, were encountered or arrested at the U.S.-Mexico border, a roughly 32% increase from April and the highest monthly total in 13 years.