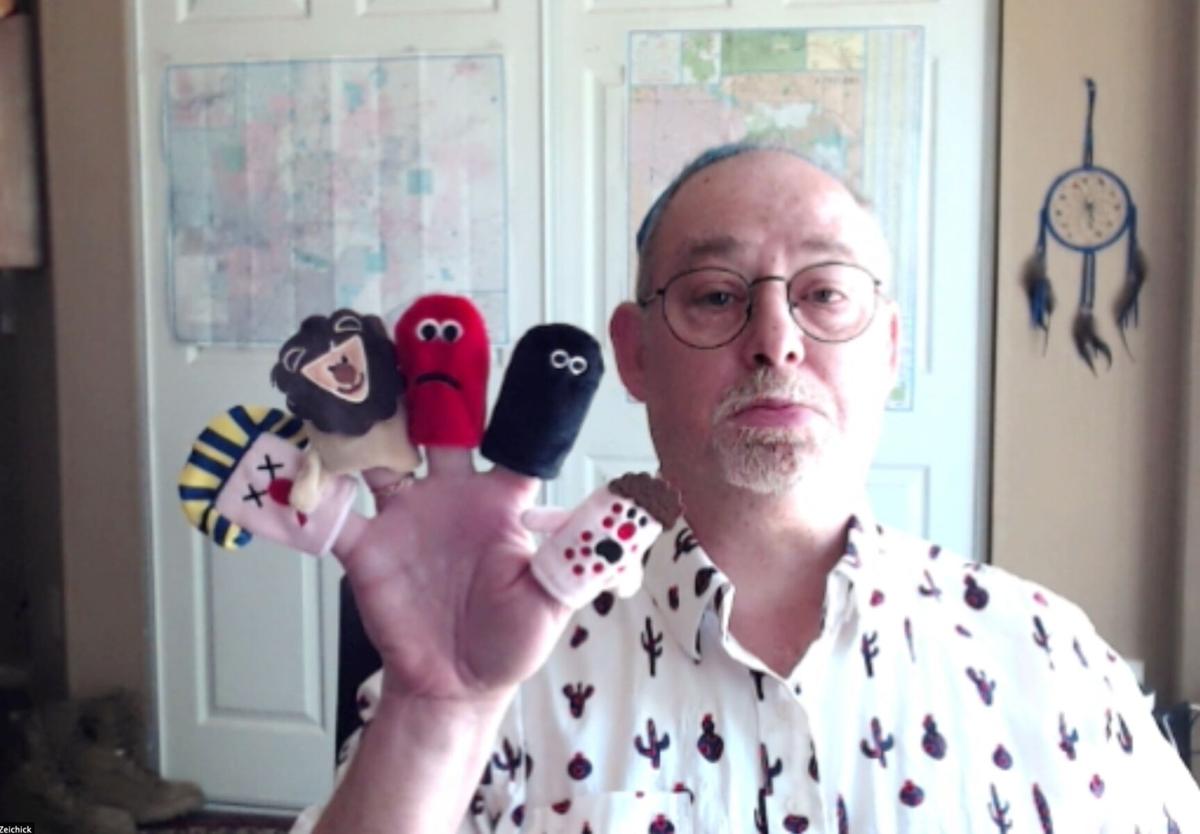 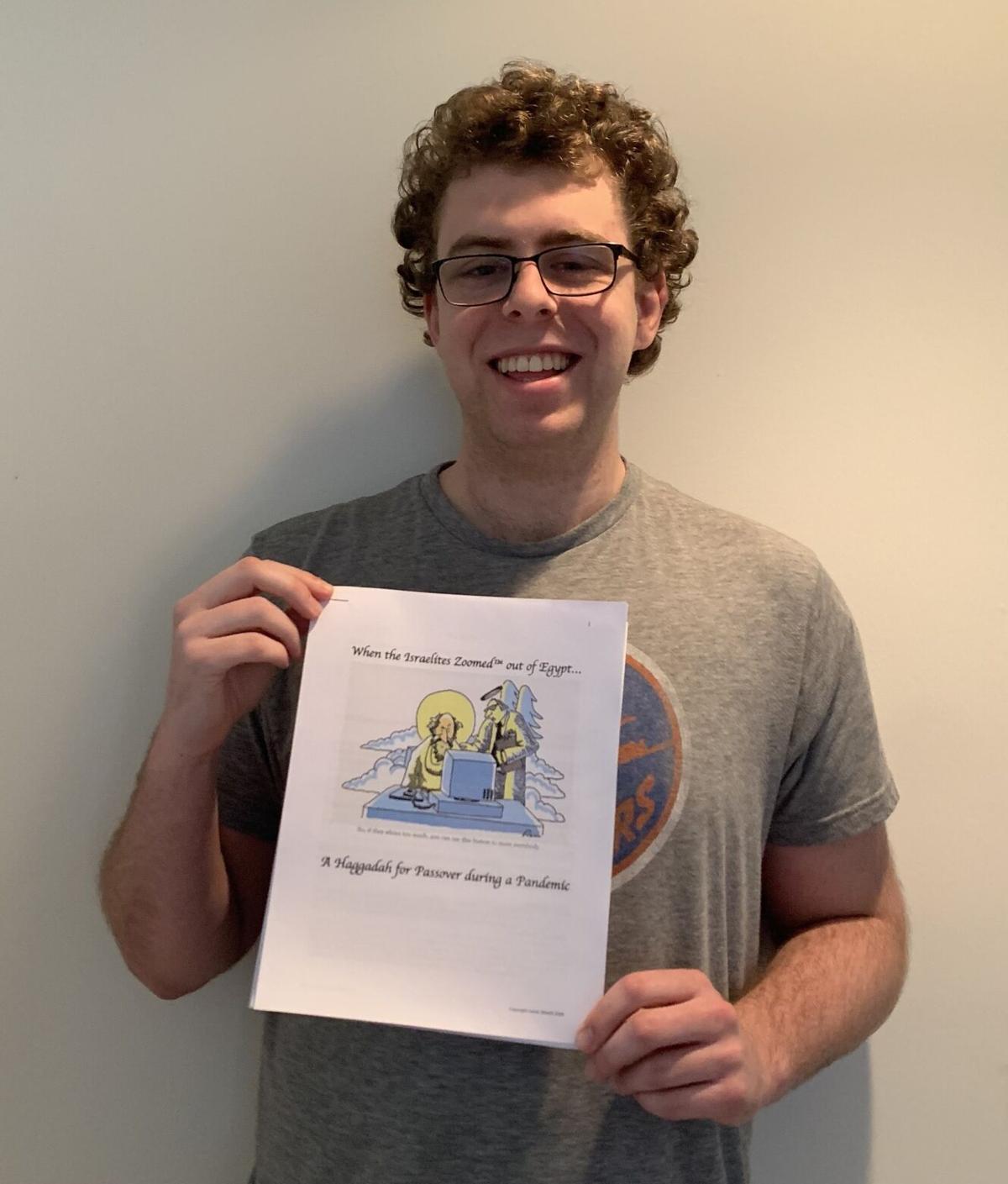 Aaron Morrill holds “A Haggadah for Passover during a Pandemic” on Thursday, March 4, 2021.

Aaron Morrill holds “A Haggadah for Passover during a Pandemic” on Thursday, March 4, 2021.

Aaron Morrill created a special Passover Haggadah last year once it became clear there would be no normal, in-person celebration. He thought of it as a fun opportunity — something special for a difficult time. And he intended to use it only once. But at the end of this month, he and his family will dust it off for one more Passover on Zoom.

“When I was writing it I would have bet money that we would not be using it, at least in this pandemic, ever again,” said Morrill.

He has celebrated Passover in Phoenix with his grandparents just about every year of his life. He was 19 the last time they shared a seder, and he knew then he wouldn’t spend all his future holidays with them — he just never expected 2020’s abrupt halt. Now 21 and a student majoring in Jewish thought and data science in New York, it just feels “weird” not to be together, he said.

Jane Wabnik, Morrill’s grandmother, said his Haggadah was the “biggest gift” that came out of 2020’s forced distance.

Last year, she hosted two guests in person and held a mini-seder over Zoom with her daughter, son-in-law and two grandchildren. Despite the distance, they were still able to have some fun at the seder, and this year’s second edition of Passover in a pandemic will look much like the first. Wabnik plans to cook her two usual main dishes: orange roasted chicken and a brisket.

Others are also feeling more prepared this time around.

Alan Zeichick and his wife are empty nesters, and they usually do one synagogue community seder and one seder at a friend’s house. Last year was the first time they cooked a Passover meal in almost 10 years.

“Instead of just saying, ‘What time do you want us to be there and can we bring anything?’ We actually had to think it through,’’ he laughed.

This year he and his wife are planning to cook chicken soup, roasted chicken and mashed potatoes and host a family friend for some “talking and eating and drinking and talking.” Pretty much like last year.

Wabnik also enjoys some silliness at her seder.

“We’ve always had a lot of fun,” she said. “Somehow we all become children again — we love the songs and we love the lessons, but we also talk very seriously about people who are currently enslaved or who do not have the freedoms that we have, or what it is to be free and how we maintain our freedoms,” she said.

Though she’s disappointed not to host a large in-person seder, she isn’t surprised.

“As I watched what was going on with the pandemic, I figured we would not have one this year,” she said.

Wabnik usually looks forward to hosting a seder for at least 14 friends and family members. She is happy to use her grandson’s Haggadah again, which was designed to capture the essence of what his family would normally do but with a shorter seder.

Tanisha Henson is also more prepared to fly solo for Passover this year.

“But when the first night came, it did hit me that I was missing something that is actually really important,” she said. “Sometimes sacrifices must be made and I figured it would be my last time to sacrifice because 2021 would be better.”

So far, this year is better for her. She passed the bar and is now working full-time as a prosecutor for the Maricopa County Attorney’s Office. But, the pandemic is still raging and an in-person seder isn’t in the cards.

Rather than be sad and dwell on the things outside of her control, she is going to make the best of it and tune into a seder online offered by JewBelong, an organization designed to help people connect to their Judaism. She learned of JewBelong’s virtual passover seder, dubbed “Burning Man-ischewitz,” on Instagram.

Robin Meyerson, co-director of Project Inspire Arizona and chair of the Shabbos Project Arizona, said it can be difficult to find inspiration for Passover as the pandemic continues to wreak havoc and keep family members apart. She recommends spending time learning about and preparing for Passover before the holiday begins as a way to create inspiration.

“It’s actually a Torah obligation — even if you are by yourself — to tell yourself the story of the miracles,” she said. If nothing else, the pandemic almost makes the plagues more relatable, she said.

Morrill’s Haggadah concludes, “Passover remains a time to meaningfully reflect on the state of our current lives as Jews, and the state of the world that we live in, religiously and otherwise. I hope that this Haggadah can serve this purpose for however long it is needed.”

He created it to serve as a sort of bridge between the time before COVID and whatever comes next, which he hopes is not too far off. JN