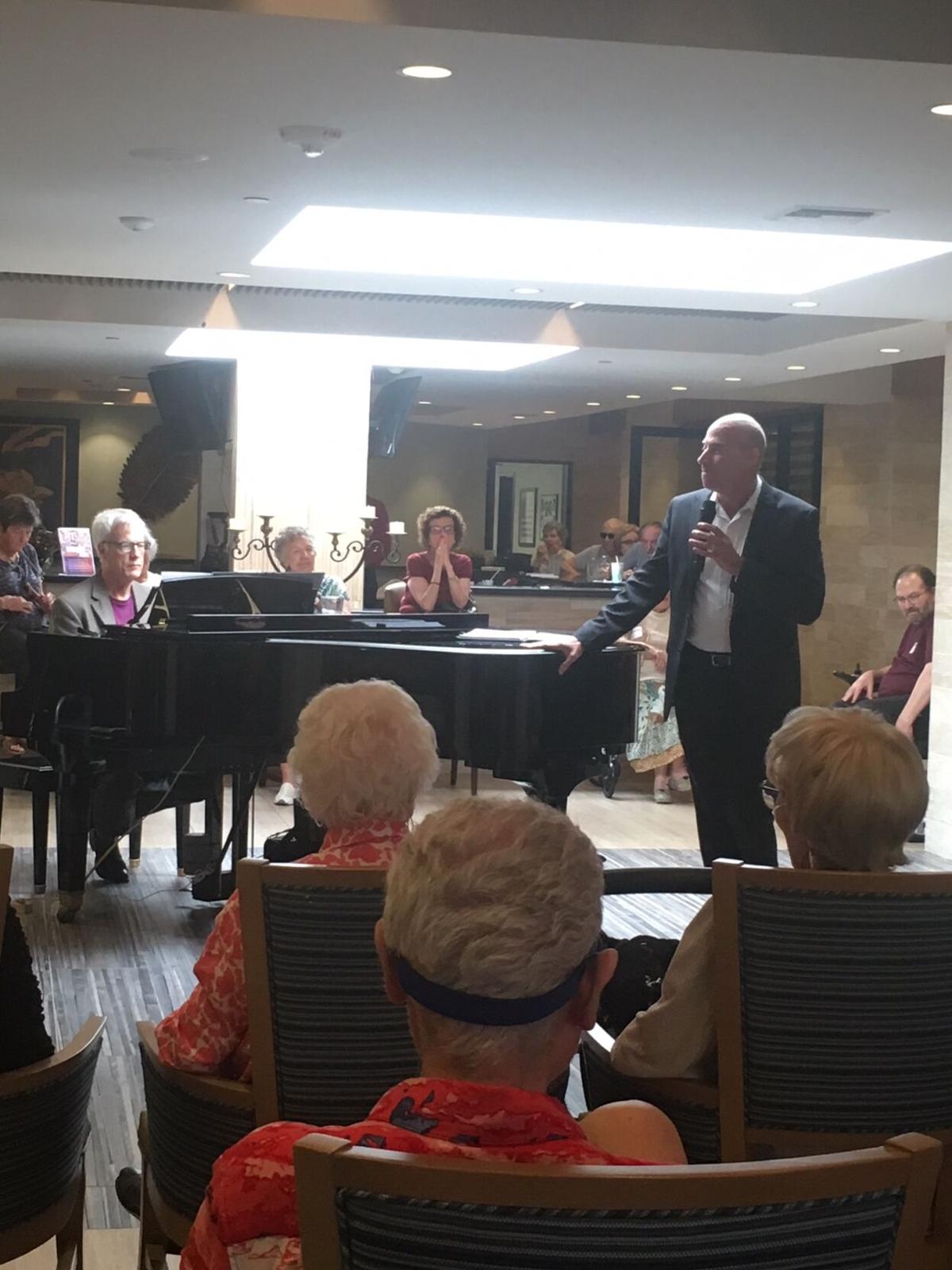 Rusty Ferracane sings classics while Craig Bohmler accompanies on the piano at The Palazzo on July 13. 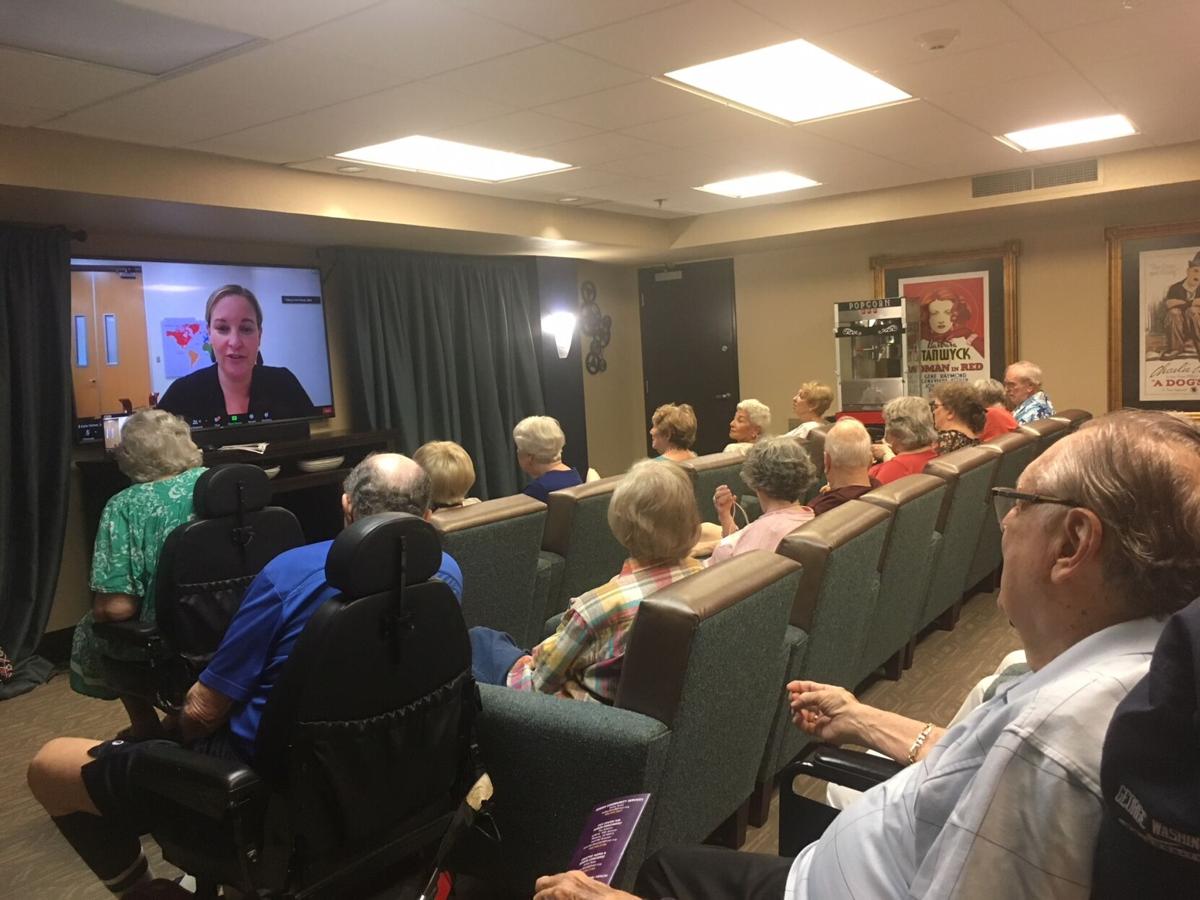 People watch a presentation by Musical Instrument Museum at The Palazzo on July 13.

Rusty Ferracane sings classics while Craig Bohmler accompanies on the piano at The Palazzo on July 13.

People watch a presentation by Musical Instrument Museum at The Palazzo on July 13.

Ten minutes before a virtual tour of the Musical Instrument Museum was to begin in The Palazzo’s Cinema Room, it seemed like the regular seating capacity of 28 chairs would be enough.

“I need that energy from people,” Rees said. “People need to laugh together and experience things together — we’re a community.”

The Palazzo in Phoenix, a senior living community, is where Brauner hosted events pre-COVID, and the event there was billed as “a fabulous day” combining the “best of both worlds: virtual and live.” It began at 11 a.m. with MIM’s virtual tour focusing on jazz. Although the event was on Zoom, Rees said the presenter kept it interactive by throwing out questions to the audience ensuring she held their attention.

Carol Janoff knew MIM’s presentation would be good. In her view, the museum always does a good job.

Janoff lives in her own home and came to the event alone. She’s been doing a few things in person and feels pretty good about it. So when she received JFCS’ email she didn’t hesitate since she was pretty sure most people would be vaccinated.

More importantly, “I haven’t been out to lunch for I don’t know how long,” she said.

The lunch that followed the tour was a good deal, Rees said. The Palazzo charged $5 for three courses.

“It was a full plate of food, too,” said Janoff. One person even brought a container to carry away a portion for a second meal. Janoff isn’t usually comfortable talking to strangers, but at the small lunch table she felt at ease chatting.

“It felt good to be around people, to get out and have a fun social event where I’m not worried about things,” she said.

Following lunch, musicians Craig Bohmler and Rusty Ferracane provided live entertainment, and for that even more people poured in, said Rees. She had to keep bringing in more chairs.

“My jaw was dropping,” she said. “It was spectacular.”

Ferracane sang a host of songs familiar to the audience, like “If I Were a Rich Man” and “Somewhere Over the Rainbow,” while Bohmler accompanied on the piano. The duo are longtime friends of Rees.

“When he sang “The Impossible Dream,” tears came to my eyes,” Rees said.

Dorothy Blumstein, a resident of The Palazzo, couldn’t help but dance along. “You couldn’t sit still. You had to move with the music.”

The audience tapped their toes, snapped their fingers and gave the musicians a standing ovation, Rees said, which is notable given that some of the audience have mobility issues. “I was on a high and still was the next day.”

The event was the first time the duo performed since COVID began. They didn’t do Zoom because they didn’t feel they came across well, Rees said, and “for performers not to have an audience for a year and a half is devastating.”

The day ended with ice cream sundaes. “It was nice that the performers stayed and chatted and had ice cream with us,” Blumstein said.

She participated in many of JFCS’ virtual programs, but is very excited to have Brauner organize in-person events at The Palazzo once again.

At least 14 non-residents came, which Rees said was a pleasant surprise. She felt the program went smoothly and the staff was wonderful, something many attendees pointed out. Non-residents and all staff members for The Palazzo wore masks, but the residents, who are vaccinated, didn’t have to.

Now that the first in-person event went so smoothly, Rees is looking forward to the next one. “There was such a vibe of excitement,” she said. “Thank God we can do this again.” JN