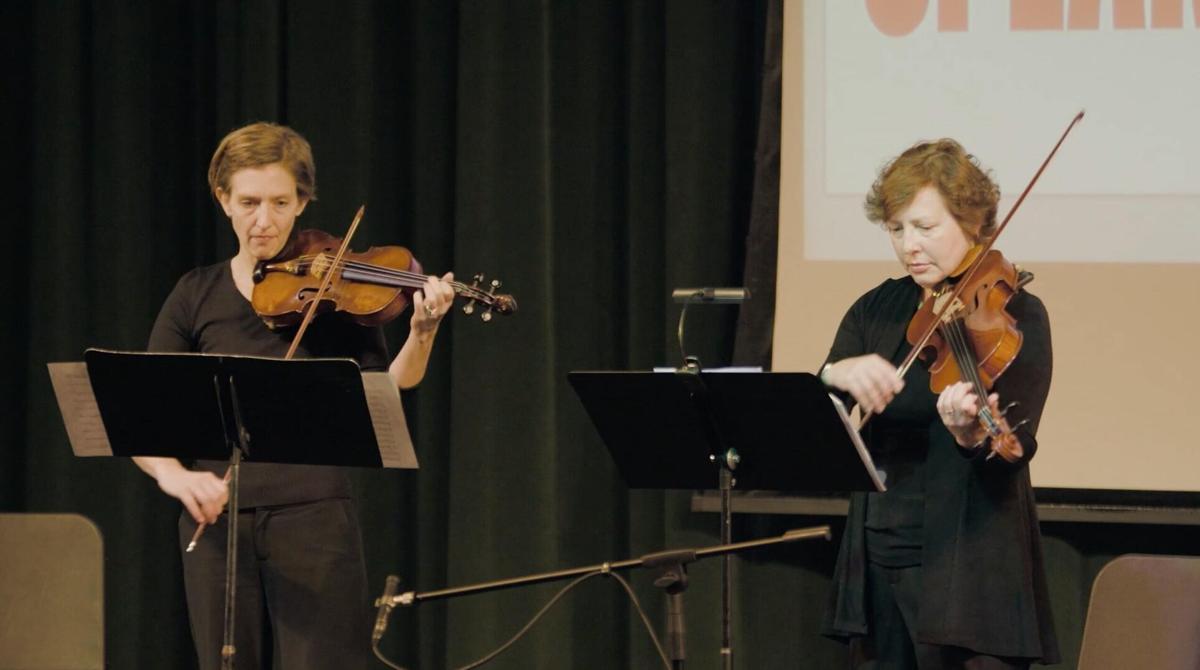 Allison O’Bryant, left, and Kimberly Sullivan perform a musical duet as part of the 2019 Violins of Hope program in Flagstaff. 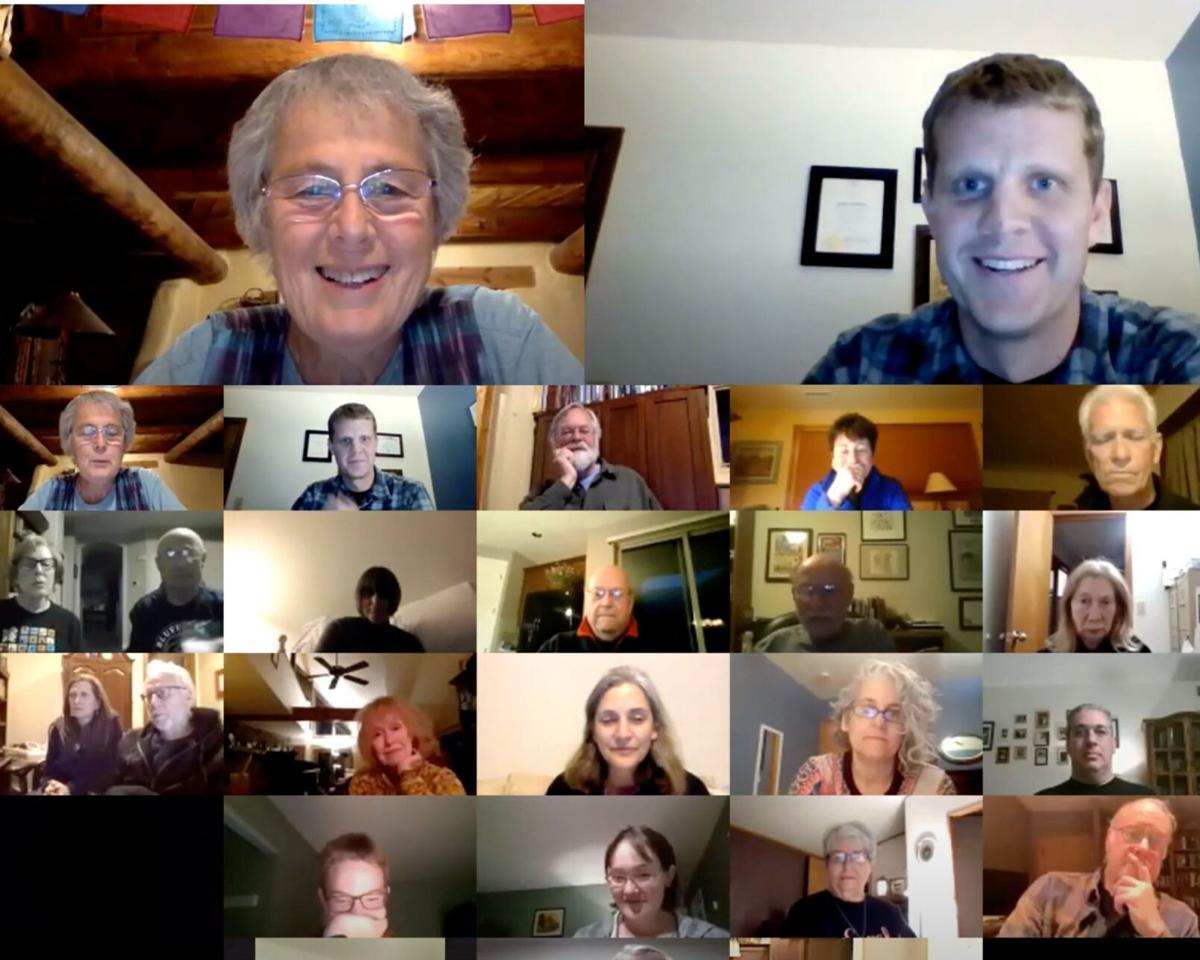 Congregation Lev Shalom Rabbi Emerita Nina Perlmutter and Pastor Adam Barnhart of Shepherd of the Hills Lutheran church were in a virtual presentation about Jonah and the Whale in March.

Bob Braudy wasn’t yet 10 years old when somebody painted a swastika on the steps leading up to his family’s house in Yonkers, New York.

“That stuck with me,” he said.

In his teenage years, he recalls overhearing his parents talk in hushed tones in the kitchen about how his dad was being passed over for promotions because he was Jewish.

As an adult, while he was consulting for a trucking company, somebody in leadership referenced a contract and told him, “I need you to Jew them down.”

“He didn’t mean it offensively. It was a microaggression. I didn’t know how to answer that,” he said. Now, at 78, he would know what to say, especially having been involved with the Anti-Defamation League for about three years. Passionate about uplifting the Jewish community and doing what he can to eliminate bias and antisemitism, Braudy recently helped launch a series of interfaith conversations in Flagstaff.

“If Jews continue to look inward, we’re not going to be around,” he said. “We have to look at how we can participate in and be valued members of the community.”

In 2017, Braudy met Pastor Adam Barnhart of Shepherd of the Hills Lutheran church while volunteering with the Coconino County Sheriff’s Search and Rescue Unit. Their shared interest in search and rescue and passion for their faith communities brought them together.

In 2019, they were both involved with Violins of Hope, a program involving a traveling private collection of violins, violas and cellos that belonged to Jews before and during World War II.

Working with the Jewish Federation of Greater Phoenix and the Arizona Community Foundation, Braudy brought the instruments to Flagstaff and created a two-day educational and concert program: one for students and one for adults. The adult program was hosted at Barnhart’s church. “It was a community event about the beauty that man can create with music contrasted with the horrors he can perpetrate,” Braudy said.

Braudy and Barnhart were both moved by the experience, and decided to collaborate to make more opportunities for cultural and religious exchanges.

They planned a “Ladke and Lefse” for their faith communities to talk about the different foods, how they’re prepared and the symbolism behind them.

“It was going to bring the communities together around carbs, because carbs unite everybody,” Barnhart joked.

COVID has indefinitely delayed that event. Barnhart said a few members of his congregation were especially disappointed and brainstormed some ways the two faith communities could mingle during COVID.

“The idea came up of having these studies together of these stories in the Hebrew Scriptures that are part of our scriptures as well,” Barnhart said.

Braudy thought it was a “damn good idea” and asked Congregation Lev Shalom Rabbi Emerita Nina Perlmutter if she would get involved.

She didn’t hesitate. Her father, Nathan Perlmutter, was the executive director of the ADL from 1979 to 1987, “so I grew up really valuing interfaith conversations.”

Perlmutter and Barnhart got to work choosing from a list of Bible stories selected by the church congregants who first came up with the idea. They held their first virtual presentation in March. They’ve held four more “Shared Stories” since, with about 40 people attending each time. The next discussion will be about Adam, Eve and the Serpent and is set for Wed., October 13, which Perlmutter noted lines up well with the Jewish calendar.

Braudy feels these events help to build understanding and respect between the two faith communities. “Shared Stories is about listening: listening to what others think and why and what they believe. And not critiquing, just accepting that’s their view of the world,” he said. The effort has brought the community closer and shows “people with disparate views can still get together and learn from each other.”

Barnhart has enjoyed learning about how the Jewish calendar emphasizes biblical texts at different times. “They’re not just a Sunday school lesson that you did 30 years ago, but they’re really alive and have great import. It’s just so cool to see those stories in that completely different light,” he said.

Perlmutter has been impressed with how familiar Barnhart’s congregants are with the stories they are discussing.

“Many of the people there probably know a lot more about the stories than many Jews I know, so I’ve been impressed with that. I’ve also been impressed by their honest curiosity,” she said.

Barnhart hopes the relationship building that comes out of Shared Stories will lead to “bigger and better things,” like doing service projects together.

In the meantime, he said these dialogues are happening in an important time, when the country is so polarized on political, social and moral issues.

“Everything seems to be driven to the edges, and radicalized. And these conversations are about meeting in the middle,” he said. JN