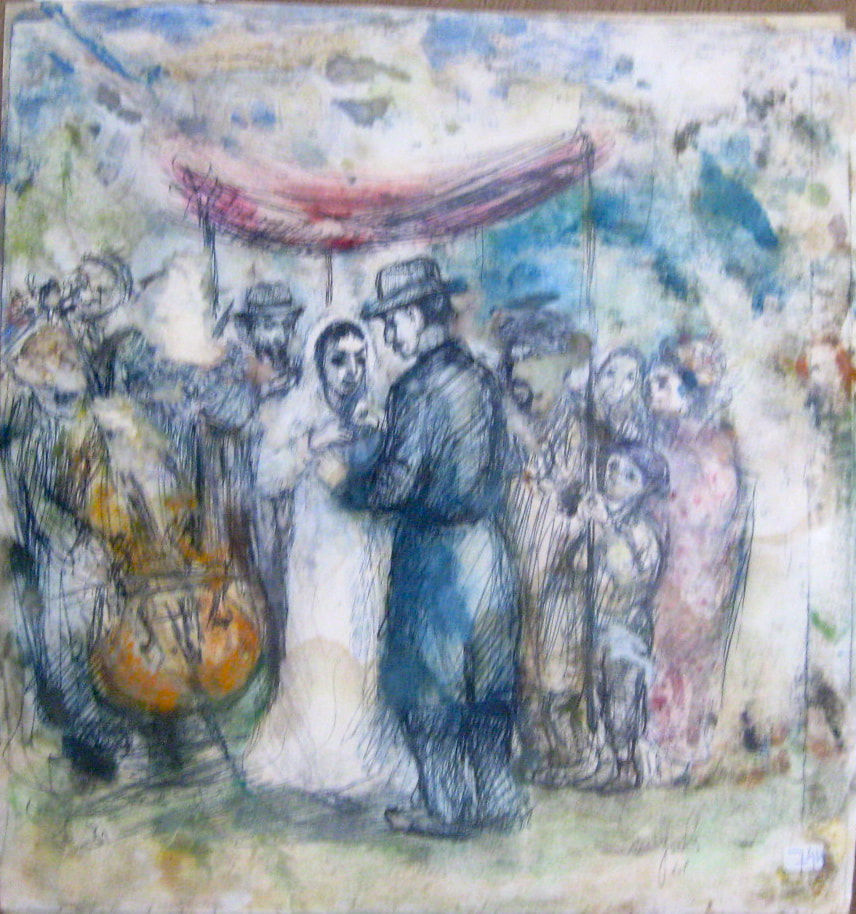 David Labkovski's painting of a pre-war wedding in Vilnius was culled from memories and family stories. 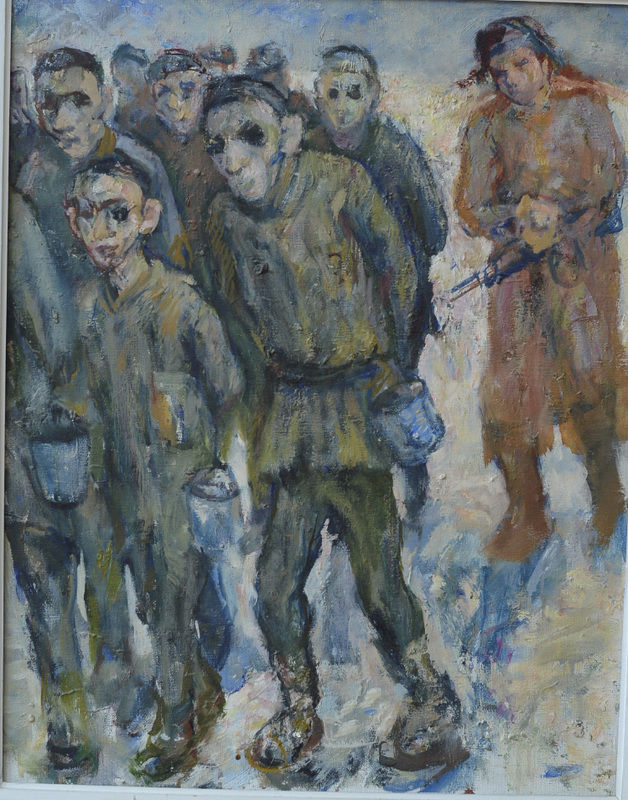 The brutal conditions in a Soviet gulag in Siberia came from Labkovski ow experiences. 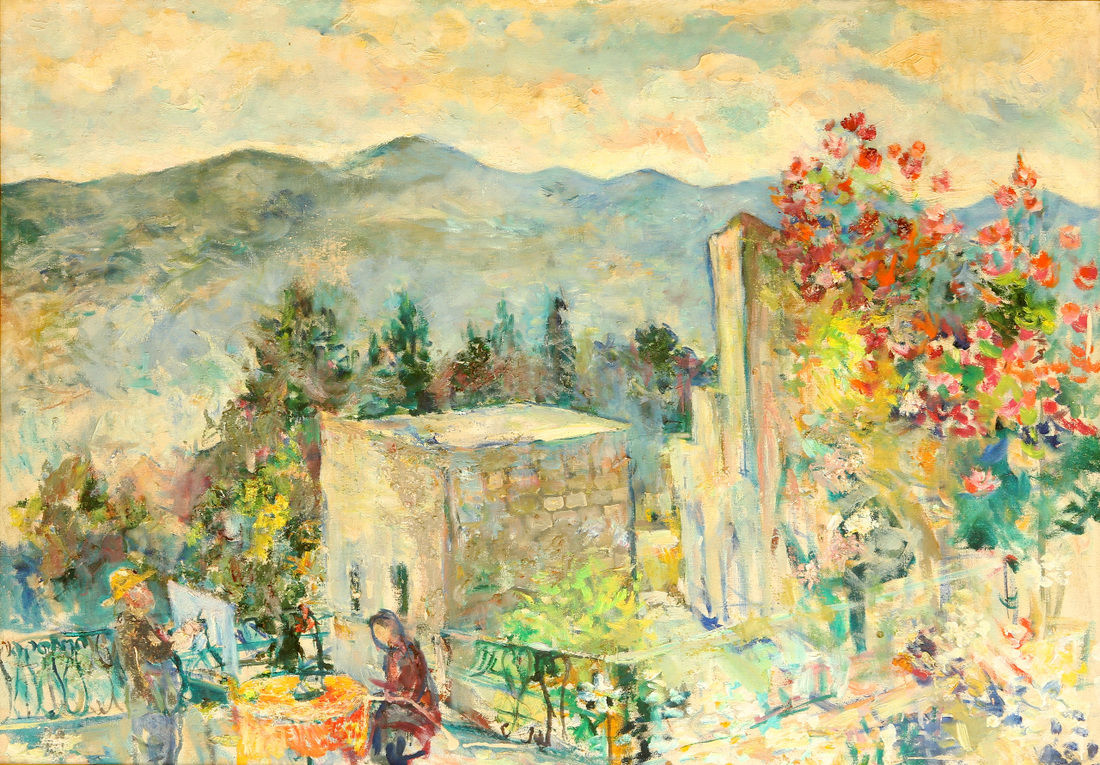 After years of living in Israel, Labkovski brought back the vibrant colors of his pre-war Vilnius work to paint landscapes of the Jewish state. 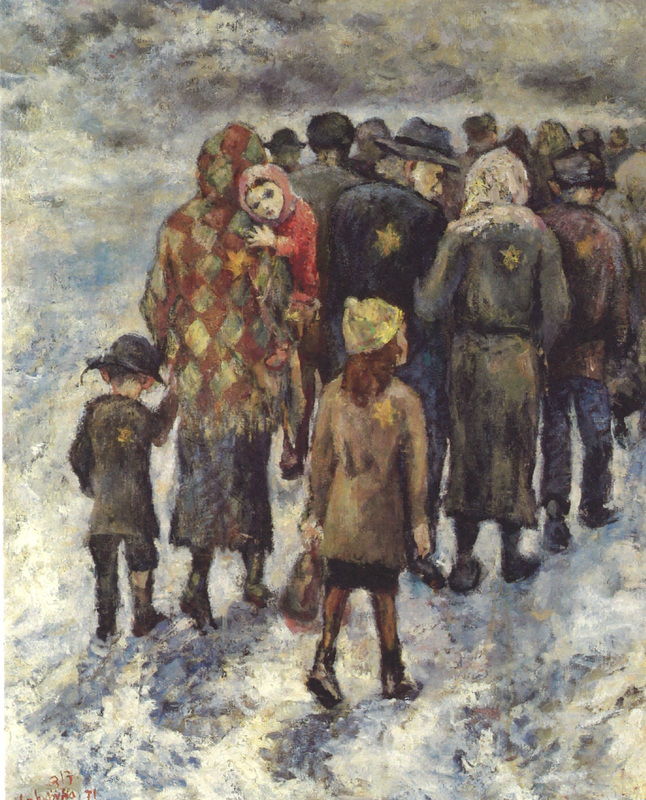 Although he was in the Soviet Union at the time, Labkovski painted the plight of Lithuania's doomed Jewish population when he returned to Vilnius.

David Labkovski's painting of a pre-war wedding in Vilnius was culled from memories and family stories.

The brutal conditions in a Soviet gulag in Siberia came from Labkovski ow experiences.

After years of living in Israel, Labkovski brought back the vibrant colors of his pre-war Vilnius work to paint landscapes of the Jewish state.

Although he was in the Soviet Union at the time, Labkovski painted the plight of Lithuania's doomed Jewish population when he returned to Vilnius.

For every story, there is a before, during and after.

A new exhibit of artwork from the late Lithuanian-Israeli painter David Labkovski details Jewish life in Lithuania before World War II, during the war and its aftermath. In the process, the exhibit also tells the story of Labkovski’s life.

“He documented not only how the Jews had been killed during the Holocaust, especially in the massacre at Ponary, but he also documented 400 years of Jewish life before the Holocaust in Vilnius,” said Leora Raikin, executive director of the David Labkovski Project and the artist’s great-niece. “He also really gives that emotion and depth to the characters and the life and what they experienced before the community was destroyed.”

Labkovski’s paintings and sketches are featured in the Arizona premiere of “Documenting History Through Art,” hosted by the East Valley JCC in Chandler. The first event kicking off the exhibit took place on Nov. 8.

“We are excited to bring this important exhibit to Arizona through our Center for Holocaust Education and Human Dignity,” said Rabbi Michael Beyo, EVJCC CEO. “David Labkovski’s artwork documents one of the darkest times in Jewish history, while it also teaches about Jewish life in Eastern Europe before the Holocaust and the resilience of the human spirit.”

Born in the Russian Empire but raised in Vilnius, Labkovski lived in the city dubbed the Jerusalem of Lithuania surrounded by a vibrant Jewish community and its culture. As he grew older, Labkovski followed his brothers to Moscow and later attended the Art Academy in Leningrad.

Stranded in the Soviet Union, Labkovski was drafted into the Red Army and was later arrested and sentenced to a gulag in Siberia for being “an enemy of the state.” Despite the terrors he faced as Red Army cannon fodder and the tortures of the gulag, Raikin said her great-uncle at least had a chance to survive the war.

While in the gulag, Labkovski began sketching portraits and giving tattoos to inmates and prison guards for which he received additional food rations. Most of his work during this period includes self-portraits showing him as hollow-eyed and emaciated.

When he left the gulag, Labkovski reunited with his wife, Rivka, and they returned to Vilnius, expecting to start a new life in their beautiful city. All they found was rubble and the near total loss of the Jewish community. It was at this time that Labkovski began painting vibrant images rich in color of the Vilnius he remembered while growing up and from the stories told to him by family.

He also painted much darker pictures of the disaster that befell his city and his fellow Jews based upon the destruction he saw and conversations with survivors. In 1958, with the help of relatives who had moved to South Africa before the war, Labkovski and his wife immigrated to Israel.

It was there that Labkovski first exhibited his art. The reaction from Israelis left Labkovski bitterly disappointed.

“The work was very well-received by critics, but the people weren’t ready to talk about [the Holocaust], let alone look at these at these images,” Raikin said. “He felt so betrayed.”

Toward the end of his life, Labkovski was painting idyllic landscapes of Israel.

Raikin grew up surrounded by Labkovski’s art, many pieces of which hung in her grandparents home in South Africa where she was raised. She became involved in her great-uncle’s art after a more than 20-year legal battle that started upon Labkovski’s death in 1991 at 85.

Raikin, who now lives in Los Angeles, helped to create the David Labkovski Project. Along with exhibiting the art, the project also goes to schools around the world to teach students about Jewish culture and the Holocaust.

“It’s wonderful to exhibit it and the narrative time period is incredible, but we really needed to use this as David would have intended — as an educational experience,” Raikin said. “This educational program has been in middle schools, high schools and colleges, and it’s obviously scaled accordingly. We use the art to teach, but it culminates in the students actually becoming the curators of the artwork.”

In April 2019, the project will enter new territory when it debuts a virtual reality tour of Vilnius based on the Labkovski’s work. The program will premiere in Lithuania.

“It’s a totally immersive experience and will take the educational component to a whole new level,” Raikin said.

And with anti-Semitism rising, Beyo said now is the right time to exhibit Labkovski’s work.

“As we approach the 80th anniversary of Kristallnacht … on Nov. 9, this exhibit serves as a reminder about what can happen when hatred, intolerance and injustice prevail in our world,” Beyo said. “My grandmother was a witness and a victim of the atrocities and violence of Kristallnacht and I grew up with her memories. This exhibit allows us to be witnesses as well.” JN

Leora Raikin will present ‘Documenting History Through Art from the Jerusalem of Lithuania, to the Gulags of Siberia, to Israel and America: The Life and Journey of the Art and Artist David Labkovski’ on Sunday, Nov. 11 at the EVJCC. For more information on the exhibition visit evjcc.org.