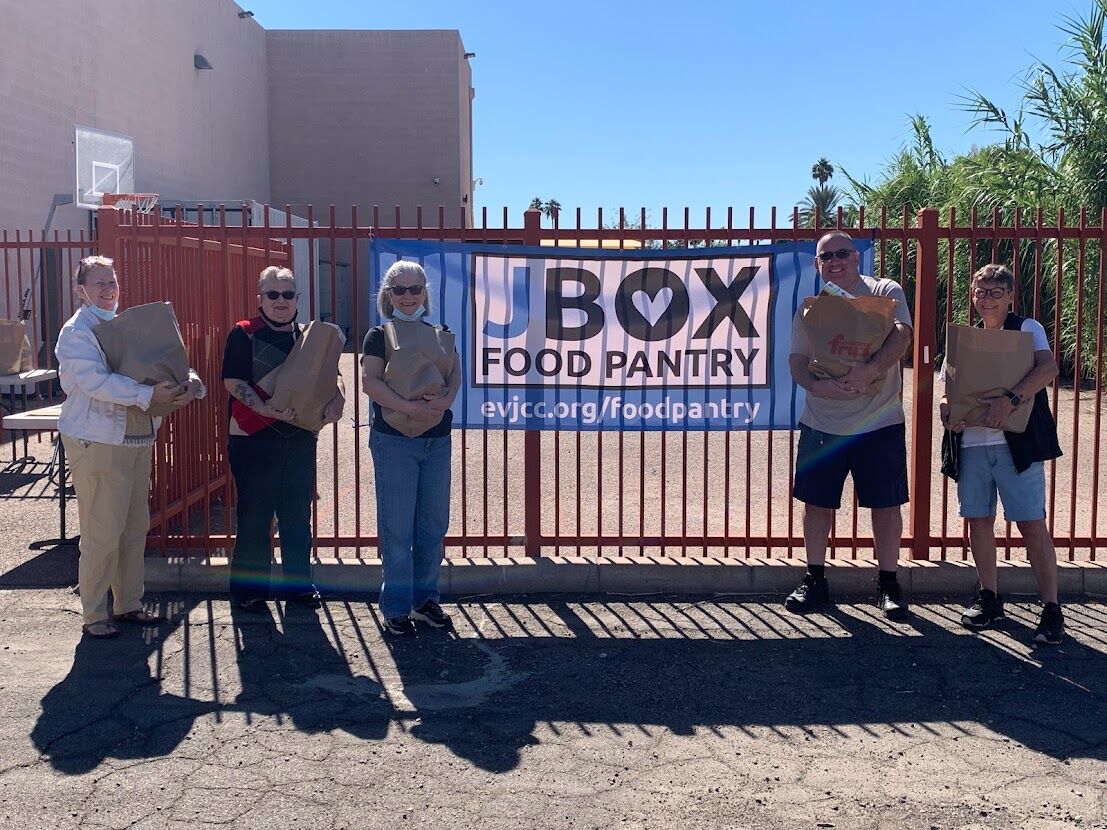 Volunteers line up to help at the East Valley JCC’s kosher food pantry on Oct. 27. 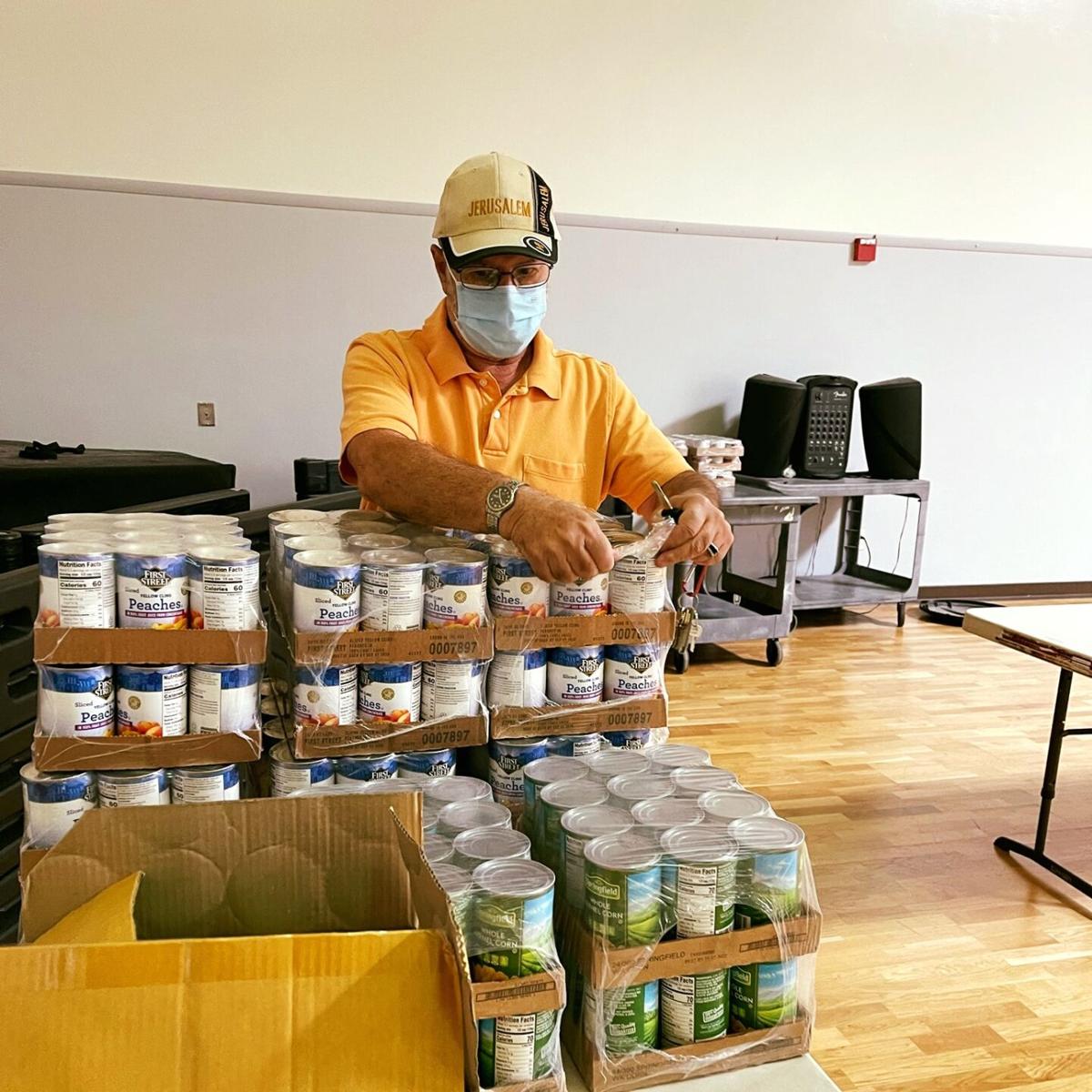 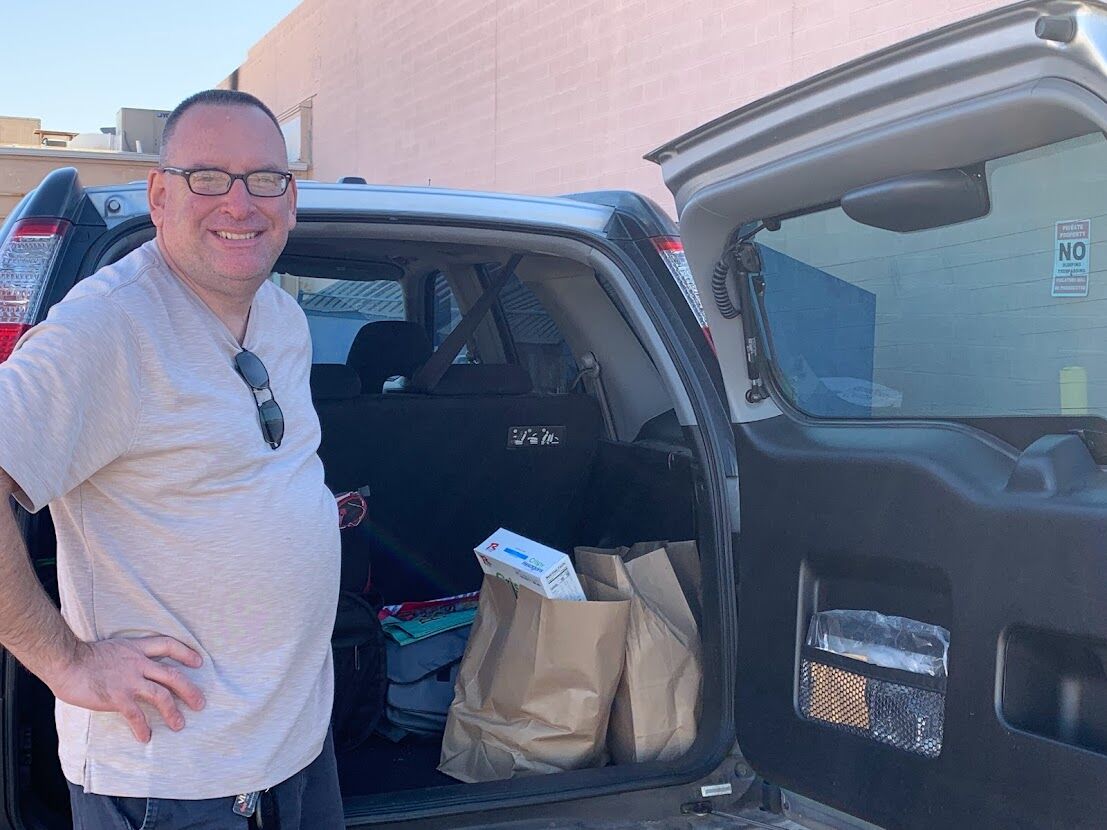 Ephraim Morris puts a bag of groceries into the back of a car during the drive-through JBox Food Pantry on Oct. 27.

The East Valley Jewish Community Center recently opened a kosher food pantry with a big assist from a Catholic organization.

When EVJCC CEO Rabbi Michael Beyo decided to expand on the center’s existing JBox, a monthly food delivery program for those in need, he reached out to Jessica Berg, the chief program officer for St. Vincent de Paul. The Catholic international voluntary organization operates in service to the world’s poor. Referred to as the Society, it has a long history of assisting people with housing and clothing needs and health care access.

But its storied history of feeding the hungry and deep experience dealing with food kitchens was what Beyo needed for his kosher pantry, so he approached Berg with the idea.

It spoke to Berg, who is Jewish, because she wants to make connections with the entire community. “I’ve always been passionate about how all faiths can come together,” she said.

She facilitated Beyo’s introduction to Danielle McMahon, the Society’s director of food services, who agreed to help because the Society is always looking for opportunities to work with groups in the community with a similar mission, McMahon said.

“We’re the stewards of food,” she said. “We want our community to be the hands and feet that make the work happen.”

But this pantry would be kosher, unlike any McMahon had worked in before.

“We want to meet the needs of people, and for some people, that means a kosher pantry,” McMahon said.

Beyo was anxious to learn what she had to teach, she said. The biggest problem was simply that he wasn’t quite sure where to start resourcing food, while her biggest challenge was understanding the guidelines of what it means for a food to be kosher.

“We got to know each other, and Rabbi Michael helped me understand kosher food,” she said.

Beyo gave her the rundown for the food box distribution he needed, which is something she does out of Catholic churches already — just never with kosher boxes.

“We decided to give it a try,” she said. Now, the EVJCC’s pantry is the Society’s first partnership in a kosher pantry in Arizona.

“It was an amazing day,” she said, via email. “Their hospitality was great and their operation is unbelievable. I was in awe of all that people donate to them, and the kitchen was huge and amazing. It’s one of a kind.”

The EVJCC’s venture is about addressing food insecurity, Baldinger said, but it is also an opportunity to add something that was absent from the area.

“There is no kosher restaurant or market in the East Valley like there is in Phoenix,” she said. “This fills a need and we’re not going to discriminate on who is and who isn’t Jewish. This is a great opportunity to help the community.”

Beyo concurred. “We are thrilled to offer this service to our community in partnership with St. Vincent de Paul and our other partners,” he said, via email. “Many people face hunger each day and we feel that it’s our responsibility to do what we can to help alleviate hunger.”

According to the Arizona Food Bank Network, one in seven Arizonans face food insecurity, more than 311,000 of them children.

The pantry had its first event on Oct. 27. So far, so good, Beyo said.

“Everything worked in the way we planned. From the logistics, to the packaging and food distribution,” said Beyo. “We are especially grateful for the staff and volunteers that took an active part in making this a reality.”

Going forward, the EVJCC will receive an allotment of food from what the Society collects: 50 staple food boxes, delivered once a month. Then, EVJCC volunteers will distribute them in the EVJCC’s back parking lot to those who register a week before each event. There is no delivery service for pantry items. The next event will take place on Wednesday, Nov. 17.

When something with so many moving parts, like this pantry, gets going, Berg said, “it’s never perfect, but we just keep working at it. And I know that people will be helped.”

She’s especially inspired by the interfaith nature of the project, and said it’s why she loves her job.

“We really shared a philosophy: People are in need and we need to try something,” Berg said.

McMahon amplified the point. “We pride ourselves on serving the community as a whole.”

Members of the Church of Jesus Christ of Latter-day Saints in Chandler provide partial funding for the pantry, too.

Robin Finlinson, community outreach and JustServe Specialist at the Chandler church, said, “I’m thrilled that our congregations are able to work together often to help people in need in various ways — now including the kosher food bank.”

Beyo has emphasized interfaith programs during his tenure at EVJCC.

“We emphasize community by putting the J in the front and the community in the center,” he said. “Everything we do is guided by genuine and authentic Jewish values for the entire community we serve.” JN

Volunteers are needed to help assemble bags of groceries each month. Those interested in volunteering or registering for a bag, go to evjcc.org/foodpantry.