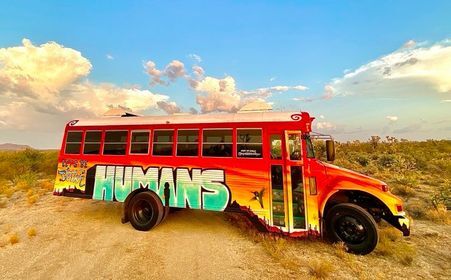 Jon Linton’s bus is set to travel to the U.S.-Mexico border at the end of December. 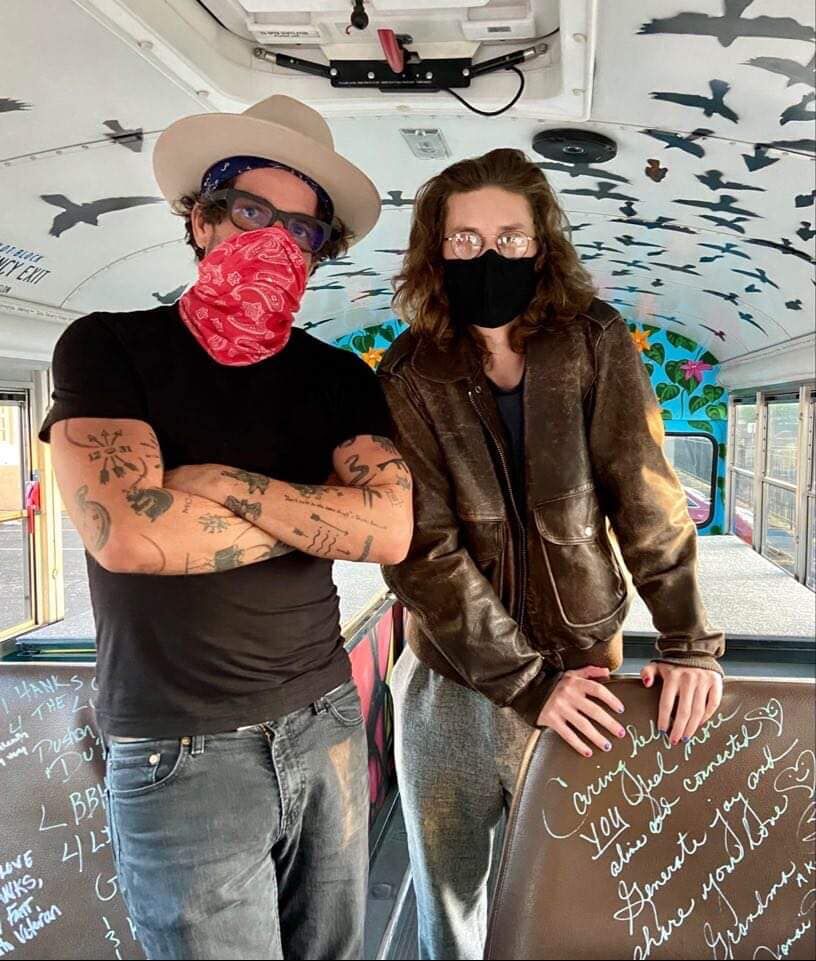 Jon Linton and Austin Davis aboard the bus they will take to the border.

At the end of December, Austin Davis, intern for Arizona Jews for Justice, will join photographer Jon Linton on a humanitarian mission to the Mexican border in his bus. The two will head to a migrant shelter in San Luis Río Colorado carrying donations provided to AJJ by Greater Phoenix’s Jewish community.

The trip was originally scheduled to take place on Dec. 18, but when it comes to dealing with immigration offices, Mexican officials and the barriers presented by COVID-19, “things move at their own pace,” said Eddie Chavez Calderon, AJJ’s campaign organizer.

Beginning in late 2018, AJJ was one of several organizations helping more than 40,000 people stuck at the border by providing legal and medical support as well as donated items. Calderon — a native Spanish speaker — started calling around to find unserved shelters.

He was surprised by the large number of people — 1,798 — staying in one shelter. Thirty percent of people temporarily housed there are children.

Calderon was also surprised to find that Mexicans and Central Americans are not the only people in the shelter. People from Cuba, Russia, Cameroon, Lebanon, Yemen and Syria are also caught in Mexico waiting a turn to speak to immigration agents in the United States.

“There’s folks from all over the world who are there — folks who are stuck because of policies they had no idea would affect them,” Calderon said. “They want the same shot at life, liberty and the pursuit of happiness — the same as everybody else.”

Davis expects the trip to take roughly two days and is prepared “to see a situation where folks are struggling to get help,” he said, via email. “I’m hoping we’ll be able to provide some aid and support.”

“We know that a lot of times, supplies are obviously a Band-Aid solution,” Yanklowitz said. “We expect with the new administration that there will be a large increase of asylum seekers coming through the border that we’ll be able to serve differently.”

For now, AJJ wants to ensure people can survive with essentials the group can provide.

“We know the situation is dire straits for a lot of them,” Yanklowitz said.

AJJ put out a call for donations that are new and unopened to help avoid any cross-contamination with COVID-19. Everything from hygiene products such as toothbrushes and deodorant to shoes, jeans, blankets and milk for babies will be aboard the bus.

“It’s everything that one needs to feel like a normal human,” said Calderon. “Things as simple as freshly ground coffee can make you feel human again.”

Calderon continually marvels at the generosity of the Jewish community, but sometimes people send things that don’t make sense, he said. “People have good intentions, but sometimes donating a pair of size-13 basketball shoes isn’t the best impact for the cause.” To ensure the most helpful items are selected, AJJ created a registry.

“Advocating for immigrants has been one of our primary issues,” said Calderon. “A central Jewish idea is to help those in the most depressed communities.”

As an immigrant himself, the issue is personal for him. And his conversion to Judaism is partly inspired by Jewish compassion toward marginalized and oppressed people.

Yanklowitz attributed AJJ’s immigrant focus to three things: Arizona is on the Mexican border, welcoming the stranger is the most important Jewish social justice value and Calderon’s influence.

“We were fortunate to hire this extremely talented DACA recipient,” Yanklowtiz said. “Who he is and his passion for this issue make us more capable of developing allies to help address it.”

“As a DACA recipient, I struggle with the immigration system,” Calderon said. “Everything always feels like a drop in the bucket regarding my own case, but if I know there’s a chance of hope I can make a change for someone, it is meaningful. It’s worth it.”

Although Calderon bemoaned that the issue is so often politicized, he noted that in the Jewish community, both Republicans and Democrats support AJJ on this issue.

Linton also feels strongly about the issue. He grew up an Irish Catholic kid in the midst of a Jewish community in the suburbs of Chicago. All his friends were Jewish, and it was his friendship with a Jewish colleague that started him on the path of helping the downtrodden. When his friend succumbed to the ravages of heroin addiction, he died homeless and alone.

Linton used his photography to honor his friend’s memory by creating the “I Have a Name” project — a photographic collection of people living on the street. Initially, the project was meant to be a single contribution to the issue. That was more than a decade ago, and since then Linton has documented the plight of Phoenix’s homeless driving around in his bus.

He also uses the bus as an instrument of social justice. He helped people join the Women’s March, Standing Rock protests, protests against the defunding of Planned Parenthood and those in support of the LGBTQ community. He also documented the plight of migrants and immigrants photographically and is no stranger to trips across the Mexican border.

When Linton met Calderon, they worked together to help the homeless, but also hit on the idea to use the bus as a means to provide resources to those caught in detention camps in Mexico.

Linton said many organizations have joined him to help those in need, but generally it is only for a brief time. So far, his partnership with AJJ seems more permanent. Davis often joins him in delivering aid to the homeless in Phoenix’s Zone, an area near Phoenix’s capitol, between Madison and Jefferson and 10th and 15th avenues.

“This mission means a lot to me,” Davis said. “Everyone deserves basic necessities, like food, water, shelter and personal hygiene items. But people also deserve joy, comfort, security — people deserve to be able to smile, to feel a sense of stability and normalcy. I want to show people that they are cared for and not alone.” JN

To donate, go to charity.gofundme.com/o/en/campaign/urgent-supplies-needed-for-asylum-seekers-at-the-mexican-border/