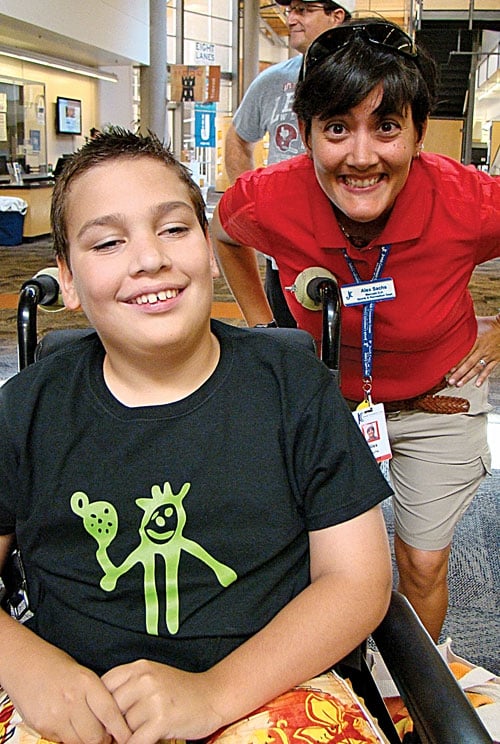 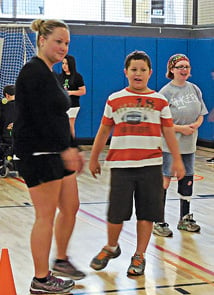 When it comes to special-needs children, “there’s not a lot out there for summer camps,” said Alex Sachs, youth sports director at Valley of the Sun Jewish Community Center, but this summer there are a couple of local Jewish options – Ometz, a new special-needs camp at the VOSJCC,  and Camp Simcha’s partnership with the Southwest Autism Research and Resource Center (SARRC) at Congregation Beth Israel.

At the JCC, Sachs has advocated and developed a program called Ometz, a half-day camp to serve children 5-13 years old who have mild to moderate disabilities. (Ometz translates to English as “courage.”)

She contacted KEEN (Kids Enjoy Exercise Now) Phoenix, which is a nonprofit that provides sports programming for special-needs children free of charge, and they partnered to provide a “Gym and Swim” program twice a month at the VOSJCC.

“Between 12 and 22 kids come,” she said, “and then parents started asking me, ‘Coach Alex, can’t you do a camp at this facility?’” And that led to a partnership with KEEN, Special Olympics and CJSN to create Ometz.

Ometz is a traditional day camp, she said, and the children will take part in the same activities as Camp Shemesh offers, but they will be in their own group, in which “they can take their time, and we’ll modify their activities.”

She foresees some of the children being accommodated, as they have in the past, in the Camp Shemesh setting. CJSN has provided help so that special-needs children could be included in Shemesh, but since 2009, Sachs said, only three or four special-needs campers enrolled.

The Ometz campers will have specialized counselors to help them participate fully, she said. Special-education teachers will be lead counselors, while KEEN volunteers will act as “buddies” with the children. Special Olympics is providing specialized sports equipment, and CJSN is also taking care of the paperwork (“They’ve been great,” Sachs said).

The camp will accommodate those with various disabilities, whether physical or developmental. “We’ll serve everyone from kids on the autism spectrum to kids with cerebral palsy, and [children] who are missing limbs,” Sachs said.

A more specialized option for children diagnosed with autism is available through a partnership between Congregation Beth Israel’s summer day camp, Camp Simcha, which is also located in Scottsdale, and SARRC.

SARRC has been helping camps provide inclusive services to children on the autism spectrum for a while, said Daniel Openden, the president and CEO of SARRC, and this is the second year that the center has teamed up with Camp Simcha to provide one-on-one support counselors to help special-needs children.

Last year, support was provided for campers ages 5-10 with Asperger’s syndrome. This year, the program has expanded to include children 3-5 with an autism diagnosis.

The partnership kicked off last year, she said, when “about six of their [SARRC] children came to our summer program,” Subrin said.

“This year, we’re expanding and potentially having 20 different campers from SARRC integrated into our program,” she said.

Openden said that children with autism typically have a difficult time interacting appropriately in social settings, and that inclusion with “typical” children is most helpful to their social education.

“The place to learn social skills is with kids your own age,” he said. “Camp Simcha gives us that chance with typical kids to facilitate the social interaction and learning. They see it, they learn from it, and they’re reinforced with it in everything they do.”

SARRC provides support counselors to help the children fit into the “typical” situations.

“We hired [Arizona State University] students and temporary employees and taught them how to facilitate social interaction,” Openden said.

“One thing that we teach them first and foremost is to watch what all the other kids are doing. If you have a 6-year-old child with autism, you watch and ask ‘What are the other 6-year-olds doing?’ We want our kids to fit in as well as they can.”

Which is why summer camp inclusion is important, he said: “Summer camps are 100 percent socially focused – so much of the day centers on social interactions – that interacting with kids their own age that don’t have autism helps them learn how to interact.”

In fact, Subrin said, the learning goes both ways. “It was a great opportunity to teach our campers that children that have some challenges can get to do the same things they do.”

The autistic children from SARRC will receive the inclusion services at no extra cost to the families, Openden said.

“It’s a win-win, they get the same tuition fee,” he said.

Openden is very optimistic about expanding the partnership.

“We’re actually moving most of what we do with inclusive summer camps to Beth Israel because the partnership was so good [last year],” he said.

“We start May 19 and run through Aug. 1,” Subrin said. For more information, visit cbiaz.org.