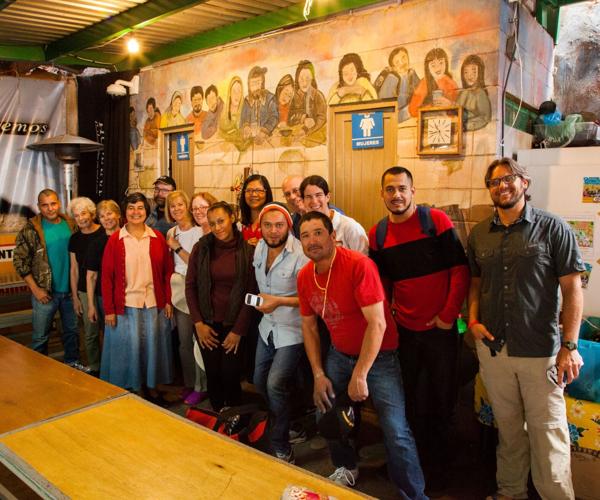 Temple Solel congregants stand with migrants at the Kino Border Institute in Nogales, Mexico in April 2017. 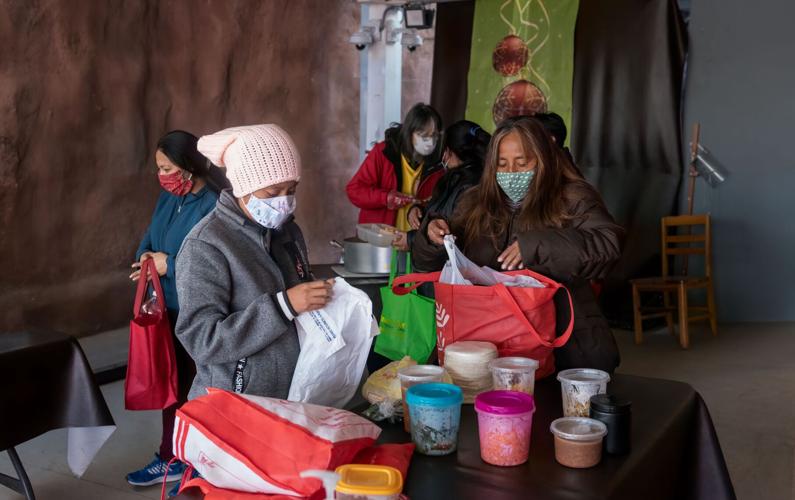 Eddie Chavez Calderon lives his life two years at a time. The Arizona Jews for Justice’s campaign director’s status as a recipient of the Deferred Action for Childhood Arrivals program is reevaluated on a two-year cycle.

“The DACA system is basically a Band-Aid that temporarily protects us. And that really sucks,” he said.

Chavez Calderon is one of more than 640,000 DACA recipients. The program was implemented during former President Barack Obama’s administration and allows United States’ residents who were illegally brought to the country as children to remain in the U.S. But not as citizens.

“I’m reminded every day of the hardships of being an immigrant and being semi-undocumented,” Chavez Calderon said.

He was four years old when he and his mom walked into Arizona without documentation in 1999. Fleeing violence, they trekked more than 1,200 miles from a rural town in Mexico.

As President Joe Biden’s administration works on new policies to meet an increase in unaccompanied minors crossing the border, Chavez Calderon and others in the Jewish community point out the time for federal immigration reform is long past due.

Preliminary data from border officials shows the number of people crossing into the U.S. reached its highest levels in at least 15 years in March, according to data reviewed by the Washington Post and CNN.

Local Jewish groups want to see action on the border issue, but have different ideas about what form that action should take.

“We are deeply concerned by the large numbers of unaccompanied children who are coming into our country,” the board members said, emphasizing that “our laws must be followed and a legal immigration process needs to be restored.”

“Each of our respective faith traditions stand on the common ground that demands we welcome the stranger as one of our own,” he said. “Common sense immigration reform is critical for the economic well-being of Arizona and America. Common sense immigration reform must also recognize the dignity of each human being that comes to America seeking refuge and a better life.”

A report released in 2019 by the Center for Migration Studies of New York found that visa overstays significantly exceeded illegal border crossings. People who overstayed their visas accounted for 62% of the newly undocumented, while 38% had crossed a border illegally between 2016 and 2017.

Linder, who is also member of the Valley Interfaith Project and engaged in social justice work with the Religious Action Center of Reform Judaism, helped organize a visit to the Kino Border Initiative in Nogales, Mexico for himself and several Solel congregants in April 2017.

“Since moving to Arizona 13 years ago, and Arizona being a border state, I became much more aware both of the presence and plight of the migrant community,” Linder said. “I was impressed with KBI’s mission that calls for humanitarian aid to migrants, education and advocacy, and wanted the Solel community to experience firsthand what most people only see and read about in the news.”

They listened to families who were living in fear of deportation because of their undocumented status and people fleeing violence in their countries of origin.

“What most resonated and had the greatest impact was the power of bearing witness to people’s stories,” Linder said. “There is tremendous power in the simple act of listening and serving a meal.”

There are currently hundreds of people stuck at the border waiting for their U.S. immigration court date and thousands of others stranded in Mexico because they were immediately deported without due process, said Joanna Williams, executive director of the Kino Border Initiative.

The binational aid organization serves migrants on the Mexican side of the Arizona-Mexico border in Nogales by providing food, shelter, clothing, medical services and legal support.

“Thousands have been returned and some people have moved to other places, but others have stayed in Nogales. One of the challenges is that most of the people aren’t Mexican, so they don’t actually have any legal status in Mexico either, for example, to be able to work legally in Mexico,” Williams said.

Navigating the immigration system is complicated and can be confusing even for policy makers, let alone the people stuck in it.

Chavez Calderon, 25, has been devoted to creating a more inclusive world and standing up for vulnerable communities since he was a teenager.

“Sometimes I really don’t want to talk about this. But then I see the faces of children that are handcuffed, who are seeking asylum here, and I just think to myself, ‘Goodness, we must do something,’” he said.

Jews have a moral obligation to advocate for vulnerable communities, he said. “As Jews, we know what the struggle is of being marginalized and oppressed,” he said.

Even though there are differences in opinions on how best to address immigration with policy, Chavez Calderon said there ought to be consensus about the need for a more human approach.

Rader most remembers the people she met, including some who had just been deported.

“They were let out of the bus and crossed into Mexico and there they are,” she said. “Some of the women were able to get shelter, but the men were just sleeping on the streets, and they were targets of cartels and gangs who thought that because they had come in from the United States, they had money.”

She said her visit to Nogales made her more aware of the situation at the border and more sympathetic to those making the choice to cross, even without documentation.

Silverman most remembers the visible and profound disappointment many of those at the border carried. The story of what is happening at the border is far different than the one passed down to him from his immigrant ancestors and the one that is common in the Jewish community, he said.

That story is often simplistic and, in many cases, has a happy ending, he said.

“These people’s stories are not really happy — yet,” he said. “And maybe not ever. That’s an important balance to the more traditional story, especially the story in the Jewish community.”

The pandemic has curtailed in-person visits to the border, but Linder said he and other Solel leaders are in regular contact with KBI and aim to organize another trip after the High Holidays in the fall. JN