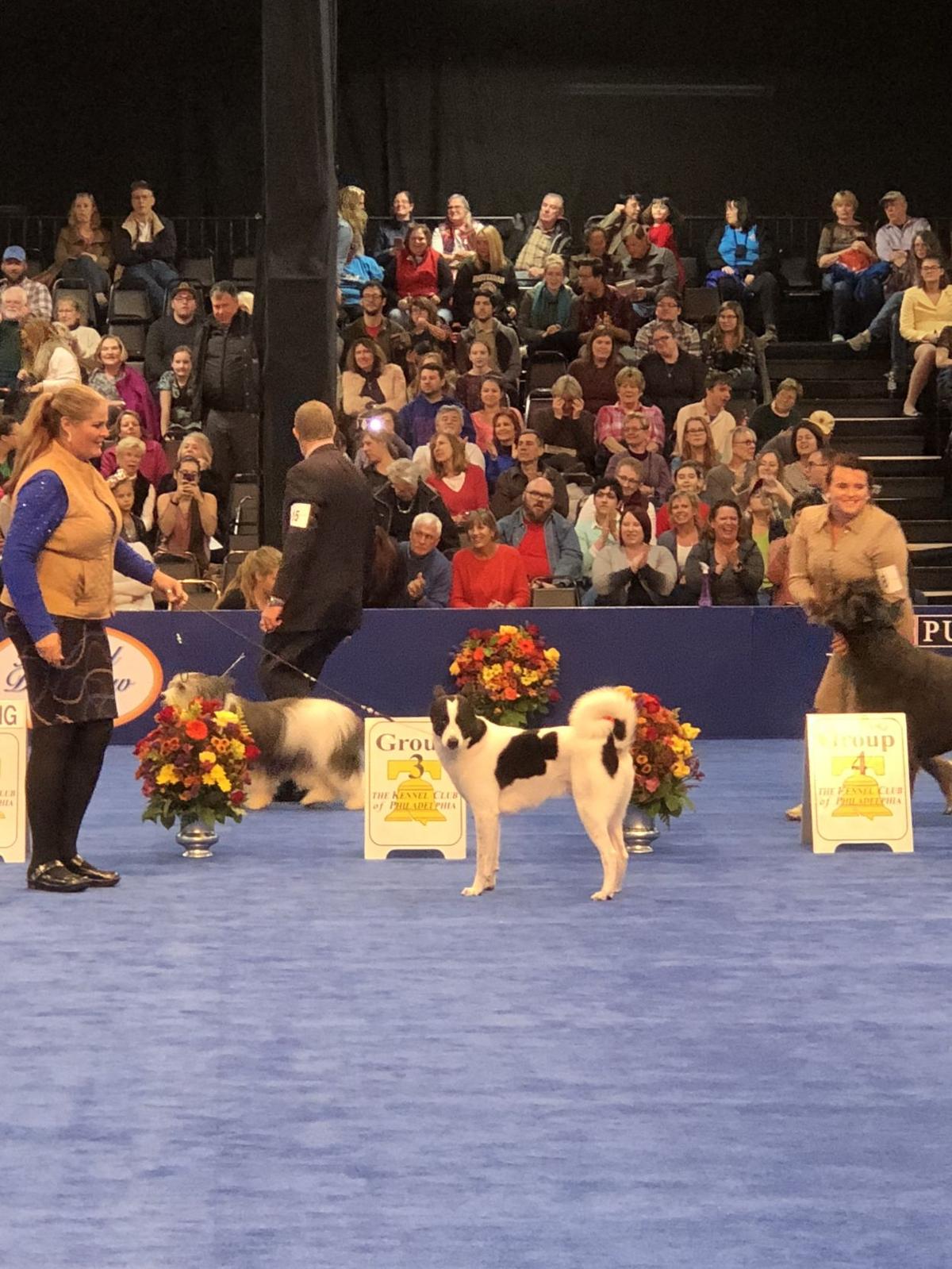 Avi hits the spotlight at the Kennel Club of Philadelphia competition last month. Avi is a Canaan dog, the ‘National Breed of Israel.’ 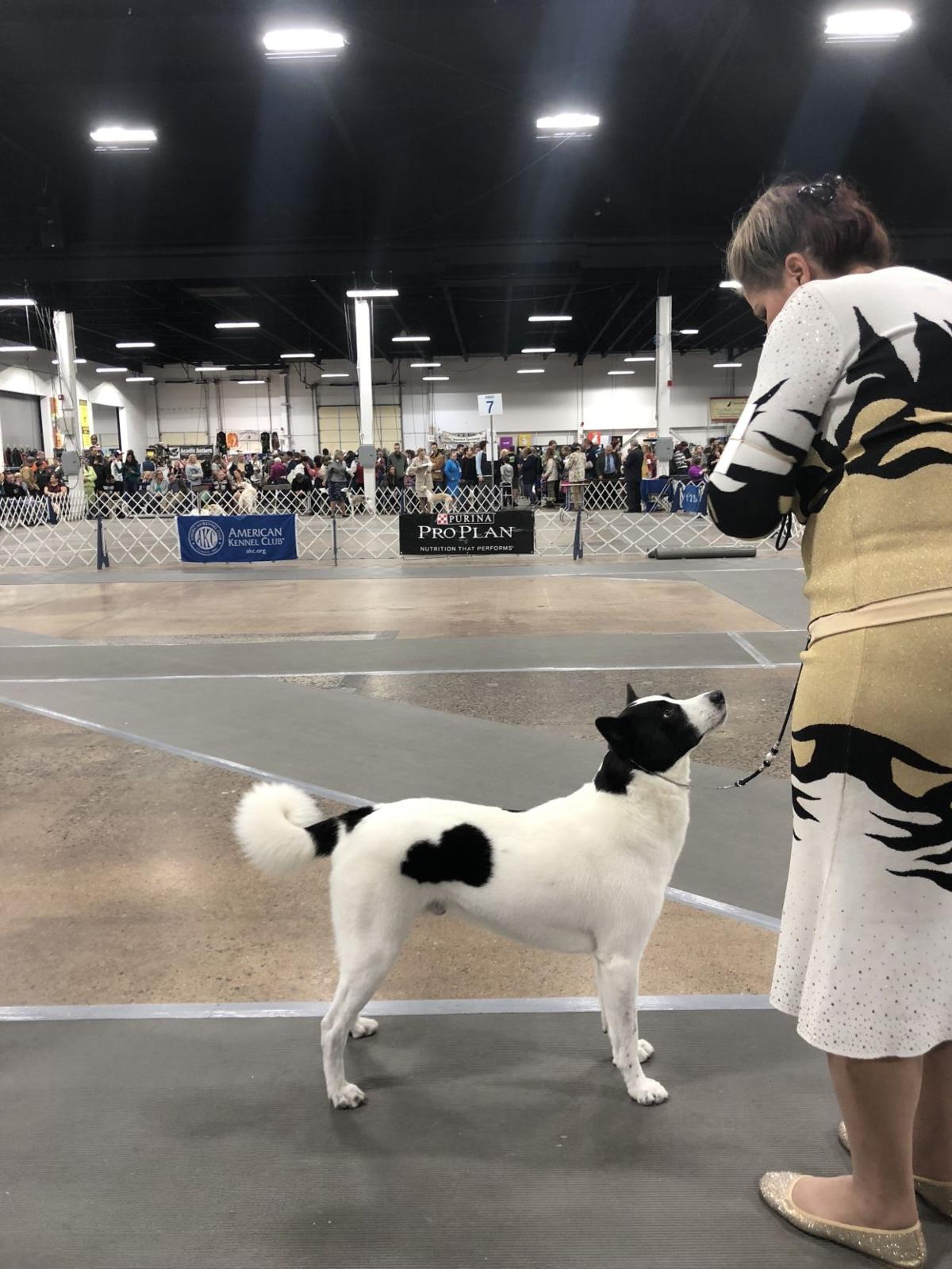 Avi may be the No. 1 Canaan dog in the U.S., but his breed is not popular in its native Israel. 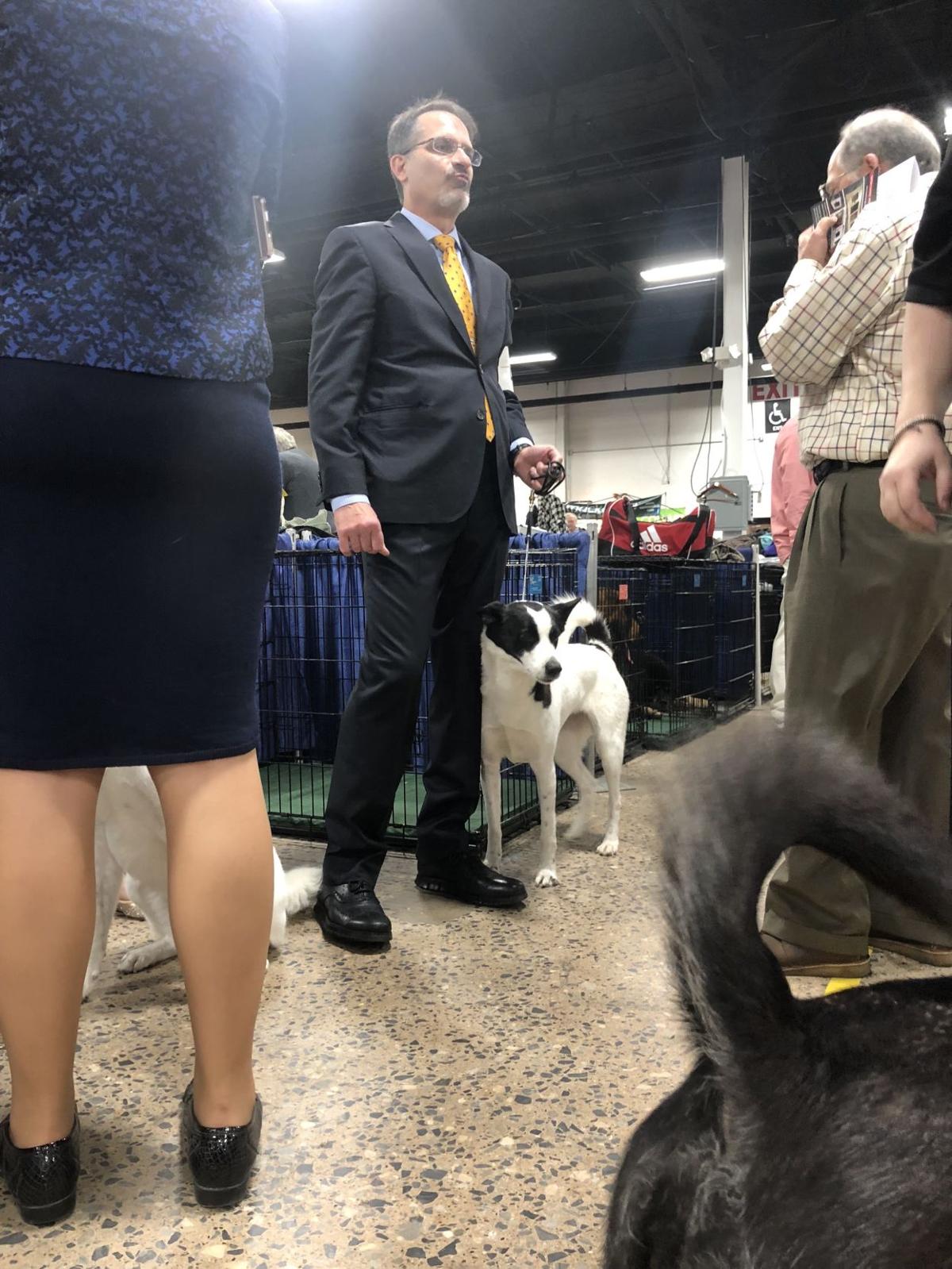 Avi with his owner, David Golden.

Avi hits the spotlight at the Kennel Club of Philadelphia competition last month. Avi is a Canaan dog, the ‘National Breed of Israel.’

Avi may be the No. 1 Canaan dog in the U.S., but his breed is not popular in its native Israel.

Avi with his owner, David Golden.

From the time he was 4 weeks old, Avi was a stunner. He wasn’t much larger than the palm of David Golden’s hand, but even then, as a little black-and-white fluff ball, it was clear he was destined for greatness.

Golden and his wife, Cynthia Dodson, tried to convince Avi’s Tennessee breeder that they were the right “parents” for the little pup. The Falls Church, Virginia, couple made their case: They had owned Canaan dogs before; they loved the breed and knew it well; and they’d had their Canaan dogs compete in herding competitions and obedience trials.

But the breeder held firm: This dog, she told them, was a show dog.

Golden and Dodson promised they would show him, and the breeder finally relented. Two years later, Avi is the No. 1 Canaan dog in the country — and he just garnered more points with a strong finish at last month’s Kennel Club of Philadelphia competition in Oaks, Pennsylvania.

The competition was held in the Greater Philadelphia Expo Center along with three other competitions, one of which was the National Dog Show, which was televised on Thanksgiving Day on NBC.

From Chihuahuas to Great Danes, dogs of every size and color were resting in crates or standing on platforms to be admired by the heavy crowds, who could also buy dog-related items at vendors such as Brewscuits (beer-infused dog treats), FineARF Collection (jewelry for animal-lovers) and Ugly Mutt (American-made dog products).

But of all the dogs in the building, perhaps the oldest breed there was the Canaan, native to the Middle East and referred to as the “National Breed of Israel” by the American Kennel Club (AKC). Just a few days before the show started, Science magazine published a photograph that is believed to be the world’s first image of a dog, carved 8,000 years ago, that bears a striking similarity to the Canaan dog.

That’s not a surprise, given the dog’s background.

According to the Canaan Dog Club of America, the Middle Eastern Pariah Dog, the feral ancestor of the present-day Canaan, dates back to pre-biblical times. Pariah Dogs were watchdogs and herders for the ancient Israelites, and have lived in the Negev ever since. Some were used as herding dogs by the Bedouin or guard dogs by the Druze; others lived undomesticated. That’s how things stood until the 1940s, when Dr. Rudolphina Menzel was asked by the Haganah to develop a dog that would guard Israeli settlements and fight in wars. Menzel bred the Canaan dog from the Pariah Dogs, and the breed was recognized by the Palestine Kennel Club, now the Israeli Kennel Club, in 1948. The breed was first imported to the U.S. in 1965 and accepted into the AKC in 1996.

Many Canaan breeders today take advantage of the breed’s Israeli history, naming their operations in Hebrew fashion. There’s Dor Vedor in Virginia Beach; Ha’aretz in Illinois; HaTikva and Mazel Tov in Minnesota; and Kol Tuv in Arizona. The newsletter of the Canaan Dog Club of America is called “The Canaan Kibitizer.”

Yet, this distinctly Israeli dog is not especially popular in Israel. In fact, in 2012, the Washington Post and Haaretz covered the controversy over Myrna Shiboleth, an Israeli resident who had been single-handedly breeding Canaan dogs from Negev desert stock. The government said she was squatting on government land and they evicted her, despite an outcry from dog lovers everywhere who compared her plight to that of the Jewish people. Shiboleth now lives in Italy.

David Golden talked about Shiboleth’s exile as he stood at his dog-show booth next to a sign that read “Kelev Kna’ani” in both Hebrew and English. His female Canaan, Salina, primped and posed with people as Golden spoke.

“We’re very concerned we won’t be able to perpetuate the breed,” he said, noting that Shiboleth was the last person who was able to get wild stock, which is an essential part of the breeding process. Now, he said, he’s not sure where an increase might come from, given that the Canaan is ranked 181 out of 189 in dog popularity in the U.S., something Golden doesn’t understand.

“It’s even in the breed standard that they are a moderate dog,” Golden said. “They’re the perfect size. They’re the perfect activity level. They’re not, like a lot of herding breeds, excessive or destructive. They’re very healthy. The breed is unlike virtually every other breed here; it’s not bred for anything. These are the dogs that lived semi-wild out in the desert for thousands of years. Because of that, they’re very versatile.”

“The thing that stands out for me,” said Larkin, a Bethesda, Maryland, resident who’s owned Canaans for more than 20 years, “is their beauty and grace, and how much they love their people. They remember their friends forever.”

Larkin, a scientist, said she arrived at the breed from a scientific perspective.

“I like herding breed dogs,” she said. “I didn’t want a dog with a lot of coat. I wanted it to have not too high energy level and I also wanted it to be healthy. I wanted it to do agility, obedience. I looked at all these factors and I saw Canaan dog. They’re very athletic but not too energetic and they’re really good companions. We go hiking all the time.”

“I was looking for a medium-sized, intelligent, wash-and-wear, healthy dog,” said Franz via email. “I found that the Canaan dog checked all those boxes. I [also] love their regal appearance, their intelligence and their independence. I love that they are a direct link to history.”

It’s not all smooth sailing with the breed, of course. The AKC calls them “aloof with strangers” and “territorial.” And, Franz notes, “Their intelligence, coupled with independence, can make them a challenge; but those traits are exactly why they have survived for thousands of years. They learn very quickly, but compliance is a whole other story. You have to build a partnership with them. They can also be master manipulators!”

This latter quality was on display as Salina wrangled a waffle fry from Dodson. But their adaptability and appeal is the reason that Golden, Dodson and Larkin keep making the rounds.

“We want this breed to survive,” Golden said, pointing to a line drawing of a dog on his sign. “These are Egyptian tomb paintings. The dog has been around probably for thousands of years.”

He thinks Israel should take more interest in the breed, “especially since there are initiatives to restore a lot of the biblical flora and fauna in Israel. This is easy — they’re already there.” He also plans to continue to appeal to the Jewish community.

“We all live in the D.C. area. Every year the Jewish Community Center puts on an Israeli street fest, so of course we’re there. I think that seems like the natural hook to appeal to the Jewish people. I mean, A., it’s a great dog, but B., you can actually have living history in your house!”

In the case of the living history named Avi, his third-place finish came courtesy of herding group judge Joyce Vanek, of Evergreen, Colorado. Vanek first met Avi when he was 9 months old, and gave him his first win back then. Now, she says, he’s grown up just beautifully.

“He’s a sound, very honest dog,” she said. “His coloration is attractive, he’s got a beautiful wedge-shaped head, he’s got the curly tail that’s required, he’s in great condition with good strong muscles.”

Avi’s show future, Vanek added, is bright. His owners hope for a similar future for the breed.