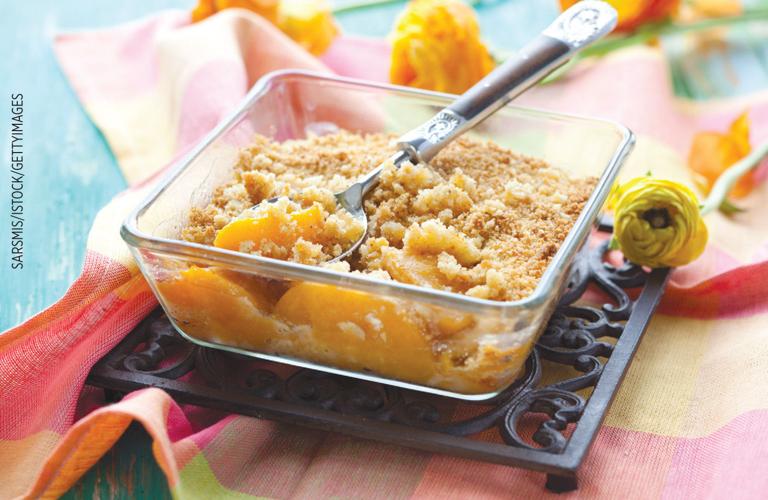 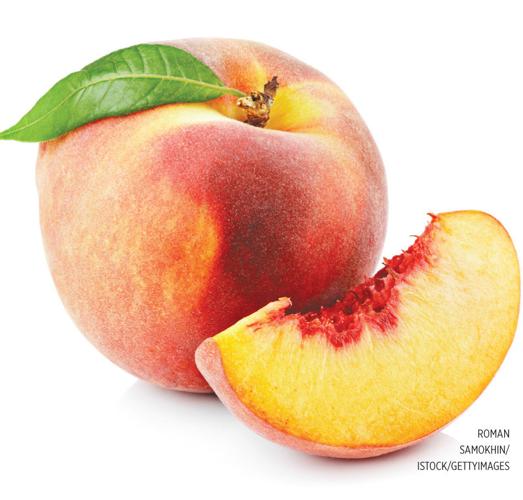 There is nothing better than biting into a ripe peach, even when the juice rolls down to my chin. With their sweet flavor tinged with a touch of tartness, peaches are my favorite fruit — not just for their taste but for their versatility, too.

The essence of summer, peaches can be baked into cobblers, pies, shortbreads and cakes. Surprisingly, peaches exude a savory side, too. They add punch to salads. A spin on a barbecue grill turns them into a refreshing side dish, particularly with poultry and veal.

Although I think of peaches as an all-American fruit, they carry the pedigree of history. Peaches originated in China and have been cultivated since at least 1,000 B.C. Traders carried them west along the Silk Roads to Persia. Spaniards introduced peaches to South America and they found their way to Louisiana via the French.

Delicious and nutritious, peaches are rich in calcium, potassium, magnesium, iron and zinc. They are light in calories and contain no saturated fat or cholesterol. They are abundant in dietary fiber.

At farmers markets, I buy as many peaches as possible. I love both yellow peaches and white peaches, which are a bit sweeter.

Because there are so many ways to enjoy peaches, I know they’ll be consumed quickly. Thinly sliced, peaches are a perky addition to most green salads. For breakfast, they are wonderful with Greek yogurt and brown sugar. If, by chance, a peach or two gets soft, cut them in half and bake them. They’re heavenly with whipped cream.

Grilled Peaches with a Kick | Pareve

Equipment: a barbecue grill or a griddle

Olive oil for coating, about 1 tablespoon

Rinse the peaches under cold water and pat them dry with towels. Cut the peaches in half. Remove and discard the pits. Evenly sprinkle the cinnamon, ginger, salt and pepper over the flesh of the peaches. Reserve. Coat the grilling surface of a barbecue or the ridges of a griddle with olive oil. Preheat the barbecue over a medium flame or the griddle over a medium-high flame. Place the peaches, flesh side down, on the cooking surface. On the barbecue, move them to one side of center so they get indirect heat. Let the peaches sizzle for about 4 minutes, and turn over to sear the skin side. After the second 4 minutes, the peaches may be ready. They should be soft and cooked through. If not, grill them more, alternating between the flesh side and the skin side, turning every 2 minutes, until ready to eat. Serve immediately.

Yield: 6 servings of peach halves as a side dish

2 peaches, cut into thin slices with the skin on

Bake the almonds in a 350-degree oven or toaster oven until golden, about 2 minutes. Watch the almonds constantly as they burn easily. Cool to room temperature and reserve. Rinse the arugula well. Drain on paper towels. Cut off and discard the stems. Drain again between 2 layers of paper towels until completely dry. Divide the arugula evenly onto 4 salad plates. Arrange the peaches and radishes on top. Place an equal amount of raisins and almonds on each plate. Sprinkle the feta cheese (if using). Drizzle on the lemon juice and olive oil over each salad. Serve immediately.

Equipment: 7-by-11-inch baking pan, such as a Pyrex pan

2½ cups medium-sized peaches, about 7 to 9. But have a couple of extra on hand in case bruising reduces the yield.

½ cup sweet butter at room temperature, plus 1 tablespoon for greasing the baking pan

Cut the peaches in half. Discard the pits. Remove the skins and slice the peaches thin. Reserve. Using a tablespoon of butter, coat the bottom and sides of the baking pan. In a large mixing bowl, cream ½-cup butter and the sugar with an electric mixer, until light and fluffy. Add the egg and beat until combined. In a medium-sized bowl, sift together the flour, baking powder and salt. In 3 or 4 batches, add the flour mixture to the large bowl, alternating with the milk. Add the sour cream, vanilla and lemon zest. Mix together on medium speed until the ingredients are well incorporated. The dough should be sticky. Move the dough to the prepared pan and spread it evenly across the pan. Arrange the peach slices over the dough. Reserve.

Preheat your oven to 350 degrees. Mix the crumble ingredients together in a small bowl with a fork until well combined and crumbling. Sprinkle the crumble on top of the peaches. Bake for 45 minutes, or until a cake tester or a toothpick inserted in the center comes clean. Cool to warm and serve with vanilla ice cream, if using. Cut into squares.