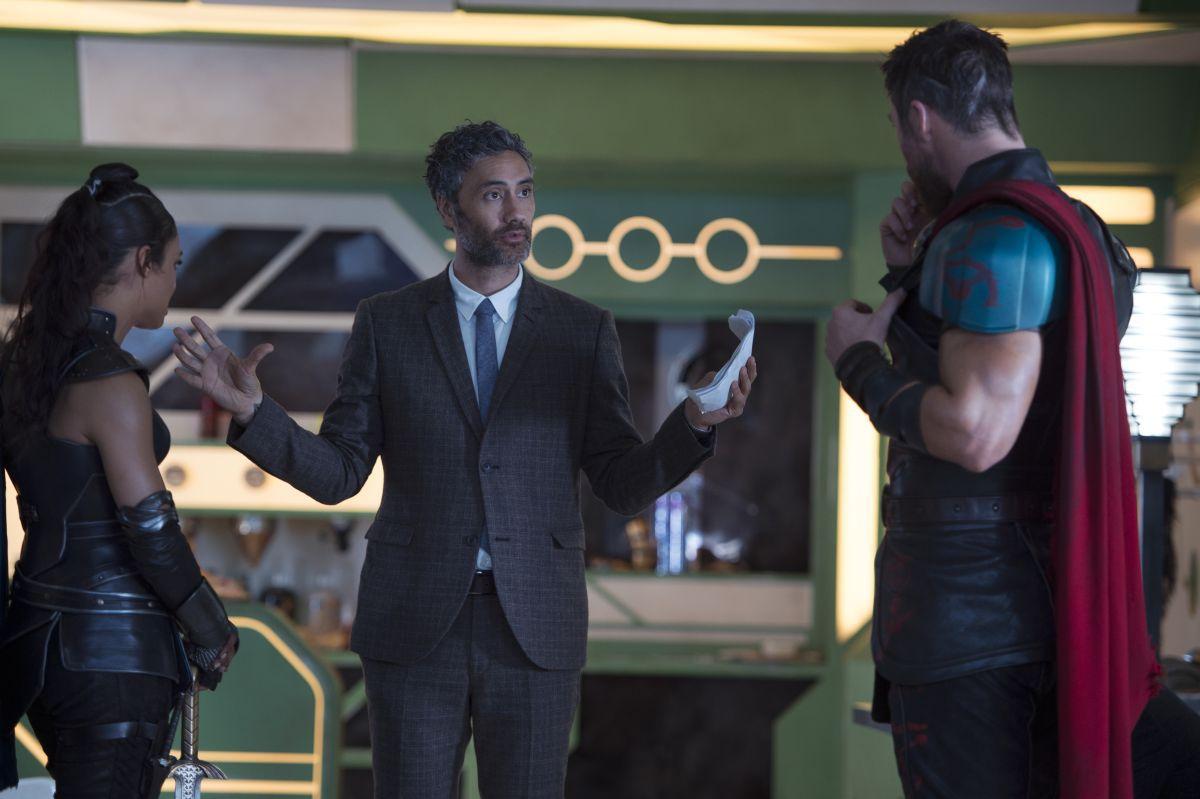 Thor and Hulk (a CGI Mark Ruffalo) keep the action and comedy flowing in ‘Thor: Ragnarok.’

Chris Hemsworth’s Thor, left, and Mark Ruffalo as Hulk’s alter-ego Bruce Banner, are stranded on the bustling planet of Sakaar.

Thor and Hulk (a CGI Mark Ruffalo) keep the action and comedy flowing in ‘Thor: Ragnarok.’

Chris Hemsworth’s Thor, left, and Mark Ruffalo as Hulk’s alter-ego Bruce Banner, are stranded on the bustling planet of Sakaar.

In “Thor: Ragnarok,” director Taika Waititi evolves the hammer-wielder’s franchise into a self-aware intergalactic comedy that provides big laughs in addition to a ton of CGI fights. As Thor himself explains in the opening, “Thor: Ragnarok” answers the question of where Asgard’s first son and Hulk were during the events of “Captain America: Civil War.”

From New Zealand, the son of an indigenous Maori father and a Russian-Jewish mother, Waititi brings the same playful charm to this film that he did to his 2014 vampire mockumentary, “What We Do in the Shadows.” For this film, Waititi also lends his voice and movements to a large CGI rock creature called Korg.

The film opens with Thor imprisoned by Surtur, a fire demon destined to destroy the planet Asgard. After some intense foreshadowing and a big fight, Thor returns to Asgard to find his adopted brother Loki (Tom Hiddleston), thought to have died in an earlier film, masquerading as their father, Odin. In a scene laden with celebrity cameos, Loki is amusingly unmasked and Thor eventually locates the real Odin with the help of another Marvel hero.

Thor then locks literal horns with the goddess of death, Hela, played by Cate Blanchett. She swiftly defeats Thor, stranding him and Loki on Sakaar, which is ruled by the Grandmaster, played with comedic flair by Jeff Goldblum. There, Thor is forced to battle an old friend while trying to convince Valkyrie, the perfect Tessa Thompson, to help them escape and save Asgard from Hela before it’s too late.

The visuals of “Thor: Ragnarok” are bright and intricate. From the golden towers of Asgard with its rainbow bridge to the planet full of garbage and portals called Sakaar, this film has a noticeably brighter palette and a more cartoony aesthetic than previous “Thor” installments. “Thor: Ragnarok” draws inspiration from the original art of one Thor’s Jewish co-creators, Jack Kirby, born Jacob Kurtzberg. Marvel Studios President Kevin Feige has described “Thor: Ragnarok” as “an unabashed love letter to Jack’s vision.”

The film’s star, Chris Hemsworth, flexes more than his abs, delivering self-deprecating lines with the right mixture of gravitas and grin. Playing the main villain, Blanchett is hamstrung by having to propel the plot, which though predictable, never bogs us down for too long before a gag or fight intercedes. The film is strongest when slyly subverting the conventions of the superhero genre, proving ultimately to be a jocular buddy comedy rather than another self-serious action flick. Hemsworth’s Thor plays well against his foils, Loki and Hulk (Mark Ruffalo).

The “Thor” films have tended to be the most feeble in the official Marvel Cinematic Universe, with the previous installment in the franchise, “Thor: The Dark World,” being a particularly weak link. Where that film was often portentious and lost in a convoluted plot, “Thor: Ragnarok” keeps lively by mixing up the more serious and duller Asgard scenes with the more dynamic ones on Sakaar.

Whether you’re a diehard comic book fan looking for every Easter egg or possible hints for future films, or just a casual moviegoer looking for some laughs, “Thor: Ragnarok” is a funny and refreshing take on the superhero genre. JN