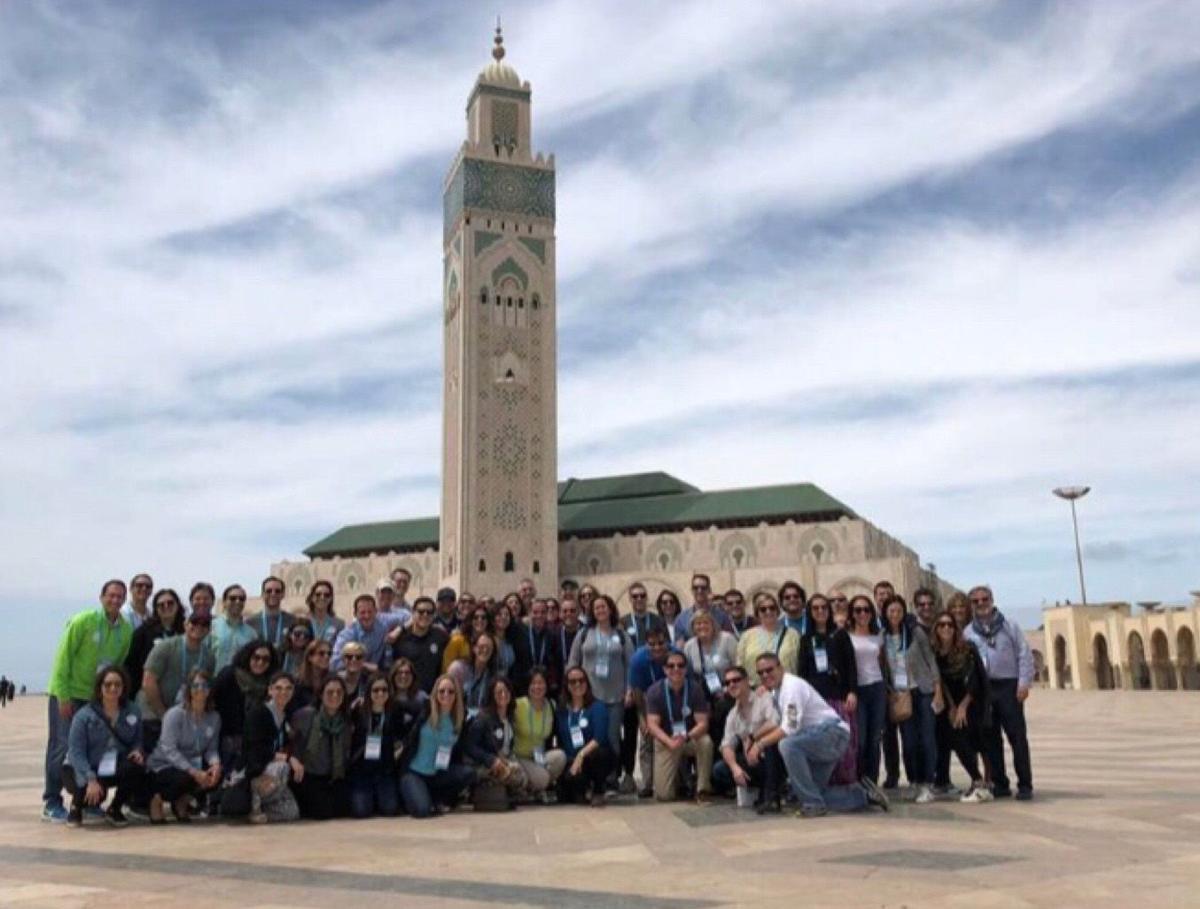 Members of the National Young Leadership Cabinet stand in front of the Hassan II Mosque in Casablanca, the third-largest mosque in the world. The cabinet recently completed a JFNA mission to Morocco and Spain. 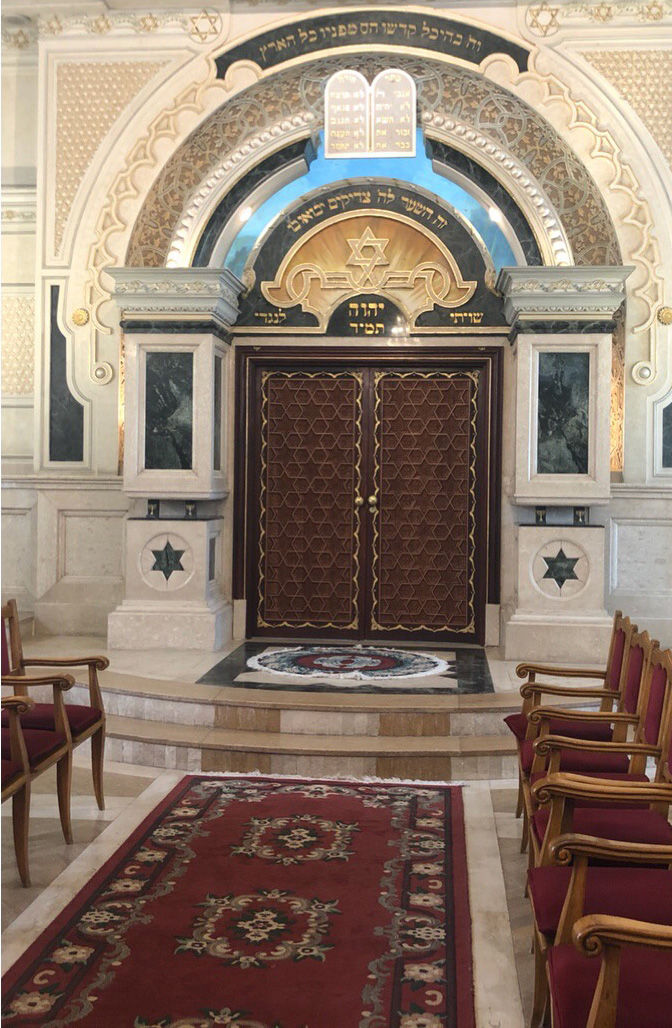 An inside look at the grand doors of the Synagogue Beth-El in Casablanca.

Members of the National Young Leadership Cabinet stand in front of the Hassan II Mosque in Casablanca, the third-largest mosque in the world. The cabinet recently completed a JFNA mission to Morocco and Spain.

An inside look at the grand doors of the Synagogue Beth-El in Casablanca.

Danielle Gross is a first-year member of Jewish Federations of North America’s National Young Leadership Cabinet. She joined the national cabinet through her work with Jewish Federation of Greater Phoenix’s NowGen program, which engages Jewish adults in their 20s through 40s in philanthropy, connections to community and leadership.

Gross recently completed a cabinet mission that took her to Morocco and Spain. The mission allowed cabinet members to experience the diversity of Jewish communities abroad, see Federation programs at work and engage with the people affected by Federation-funded programs.

Gross was accompanied on her journey by NYL Cabinet Israel and Overseas Co-chair Rachel Hoffer, who is also a NowGen board adviser.

Both Gross and Hoffer wrote daily roundups of their time in Morocco and Spain. Over the next few weeks, Jewish News will publish these dispatches. Here, Gross describes her first day in Casablanca.

The morning began with an in-depth description of Joint Distribution Committee’s involvement in Morocco from Valerie Davis Allouche, senior program manager of Morocco. This includes several Jewish day schools, a home for vulnerable adults, assisted living for elderly Jews and various social services to improve the lives of Moroccan Jews.

The cabinet members then boarded four buses to experience these services first-hand. Our first stop was the Museum of Moroccan Judaism, the only Jewish museum in an Arab country. The museum houses photography exhibitions and memorabilia from abandoned Moroccan synagogues. The Torah scrolls, megillah, Torah ornaments and tzedakah boxes looked like items that would be used in the present day, despite being abandoned for decades. One notable item was the “Megillat Hitler,” which tells the horrors of Hitler’s actions similarly to the story of Haman.

One of my favorite ways to explore a culture is through the food. Cabinet members indulged in the most extravagant lunch buffet with a variety of colors and textures at the Stade Olympique Casablancais, a private Jewish sports club. I have never seen such an immense number of food options on a buffet table. Apparently, this amount of food is common in Morocco. We had an equally decadent dinner.

Next on the itinerary was a Jewish and Muslim coexistence panel. One of the Jewish schools in Morocco is composed of about 80 percent Muslim students. The only difference in curriculum for the students is that the Jewish students learn Hebrew and the Muslim students learn Arabic. We were able to hear from an 11th-grade Jewish student and an 11th-grade Muslim student, along with a Muslim teacher and a Jewish teacher. The participants of the panel described a collective community where religious differences do not divide the students. The two students spoke of their strong friendship since early childhood and their dreams of being lifelong friends and moving to the United States for college.

During the panel, I could hear the adhan, the call for Muslim prayer, from outside. It is a very distinct sound and was surreal to experience this directly.

The tour continued. The Hassan II Mosque is the third-largest mosque in the world. This was my first visit to a mosque and it helped me gain a better understanding of the traditions related to Muslim prayer. This mosque was built on a grand scale and included amazing detail. We toured the main hall, the massive washing area and the perimeter. The mosque can hold 200,000 Muslims for prayer.

We then drove to the Jewish quarter, where we visited the Jewish Home for the Aged. In a beautiful, lush courtyard, a man was frying fresh donuts and women were pouring traditional Moroccan mint tea in honor of our visit. Cabinet members passed out refreshments to the elderly and disabled residents. We shared stories with the residents who were able to speak English. We exchanged smiles and hugs with the residents unable to speak English. The Joint Distribution Committee’s essential work was apparent. These vulnerable Moroccan Jews were cared for and in good spirits. This was truly a heartwarming experience.

A block away from the elderly home was a kosher Jewish bakery and the Synagogue Beth-El. One of my favorite moments of my first day of mission was sitting in the synagogue surrounded by the joyful faces of the National Young Leadership Council. Jeff Rum, NYL co-chair, led us in the shehecheyanu.

I was grateful to be able to sing a Hebrew prayer with other young adults in an operational synagogue in a Muslim country.

The day concluded with dinner at the Jewish Community Center. We walked in and were flooded by the sound of traditional Moroccan music. I had the feeling that I walked into an incredible festival. We all danced together and enjoyed the beautiful evening. The head of the Moroccan Jewish community and ambassador-at-large to King Mohammed VI, Serge Berdugo, spoke with us about the changes to the Moroccan Jewish community, the support of the Jewish community from Mohammed VI and interreligious dialogue. During the meal, I sat with two Jewish Moroccan women. We discussed life in Morocco and their feelings of being welcome as Jews in Morocco. JN