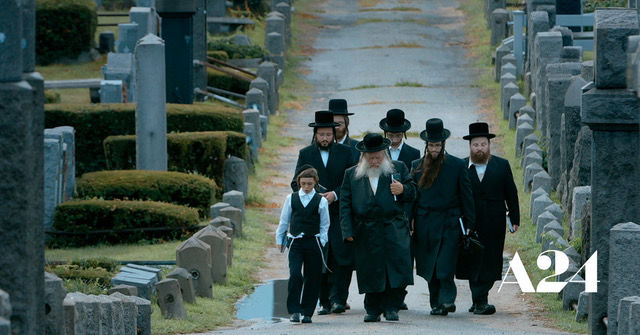 A scene from ‘Menashe.’ The movie was filmed within Brooklyn’s Chasidic community.

A scene from ‘Menashe.’ The movie was filmed within Brooklyn’s Chasidic community.

“Menashe” is an insightful and moving portrait set within Brooklyn’s Chasidic community and is the first full-length film in Yiddish to hit the big screen in 70 years. The story behind the film is just as engaging.

“Menashe” is based on the true story of Menashe Lustig, a Chasidic grocery clerk struggling to maintain custody of his 9-year-old son after his wife dies. Inspired by the widower’s story amid his tradition-bound culture, which requires that a mother be present in every home, the movie sheds light on the very private Chasidic community.

“I didn’t know until I met Menashe about the community’s informal court system and how it impacts kids and people who want to get remarried after their spouses die,” he said.

Weinstein, an established cinematographer and director with commercial and documentary credits, said that the project was a risk for Lustig — especially because Weinstein wanted to film on location inside the isolated community.

Although Lustig had posted some comedic videos on YouTube prior to the movie, Weinstein points out that the full-time grocery clerk had never even been in a movie theater until the first screening of “Menashe” at Sundance.

“I wanted to make a film that was based on a real person, and Menashe was a revelation,” said Weinstein during a recent phone interview, adding that the film featured other non-professional actors as well. “We taught them not to worry about hitting a mark, to just be in the moment. That’s challenging for anyone, but many of those in our film hadn’t even seen a movie before!”

Menashe’s on-screen son, Rieven, for example, is not a professional actor. He’s portrayed by Israeli Ruben Niborski, whose parents are esteemed scholars in Yiddish studies.

“The goal of casting Ruben Niborski, who plays Rieven, wasn’t to be an actor,” Weinstein said. “He was just a regular boy who was humble, polite and nice, and had no pretenses.”

Shooting mostly in secret in New York’s Borough Park, Weinstein overcame many challenges. There were many casting and production changes due to the Chasidic community’s restrictions on technology. Production locations would also fall through, with some in the Chasidic community changing their minds about being involved in the film. The one grocery in the film actually had to be shot within several different groceries.

The language barrier was yet another challenge, with filming taking four times as long because of the Yiddish. The non-actors would rehearse in English, so Weinstein could work with them on the emotional beats. However, none of the filmmakers, including Weinstein, speaks Yiddish.

“The actors rehearsed scenes in English, then once we had it blocked, they’d switch to Yiddish,” said Weinstein, who, growing up, attended a Conservative Jewish day school in suburban New Jersey. “When they were acting in their native language, they could be more in-the-moment. After the Yiddish takes, the translators would tell us if anyone went off-script. It was important to keep the authenticity of Yiddish since it’s such a varied language. Every neighborhood and family has its own Yiddish.”

Weinstein added, “I was interested in making a film about Jews, not a Jewish film.”

Kathy Shayna Shocket, a former TV entertainment reporter, is a freelance writer based in Phoenix.