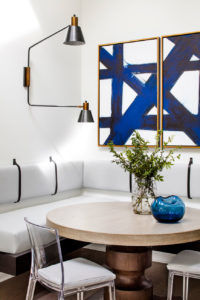 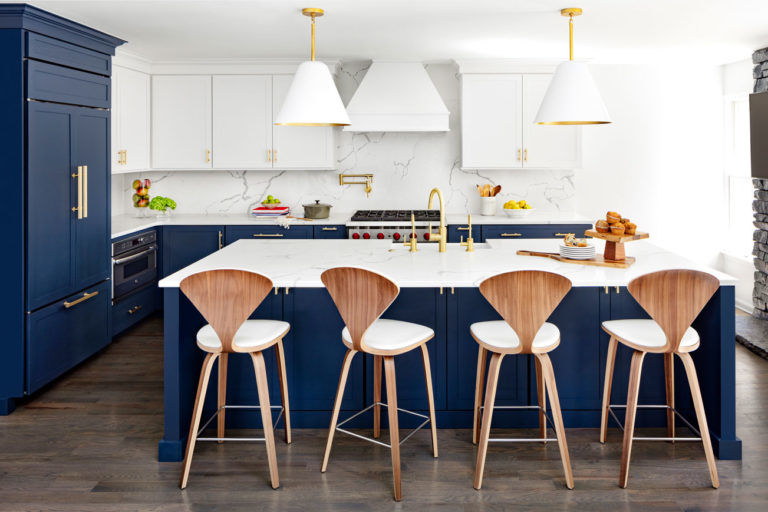 There’s nothing like a gorgeous, well-designed kitchen to set the right vibe for the rest of the home. That’s clearly what Stephanie Gamble of Stephanie Gamble Interiors had in mind when she was commissioned to fix up a newly purchased home in Maryland.

The client, who was relocating from Brooklyn, New York, with her two children, loved the location and the size of the home yet thought it was dated and lacking in “good flow.” This meant a reconfiguration was necessary.

“We started by completely relocating the kitchen,” Gamble says. “We moved it to where the family room used to be, and then we also took down the wall between the old family room and the former kitchen.”

This allowed for a much larger, expansive kitchen that the client had initially hoped for.

“The client wanted a kitchen area that was more open and could accommodate her family and guests,” Gamble says.

Once the space opened up, they got to work on the fine details.

For the overall concept, the client requested a “fairly modern” space with a “super clean design.” And, Gamble notes, the client “loves navy and white,” which gave her a great starting point. So Gamble and her team drew from this inspiration and followed along with a sharp, two-toned look with fresh white on all of the uppers and deep navy blue on all of the lower elements, including the island.

With this color scheme as the main focus, “everything fell into place from there,” Gamble says.

“We then chose to do the countertops in Statuary Classique Quartz and carried that material up the wall in lieu of a tiled backsplash,” she says, also mentioning that they chose this material because of its durability and ease of maintenance.

“We also went with a Wolf gas range and Subzero Fully Integrated refrigerator with a paneled front to give the kitchen a clean look,” she adds.

A particular standout in the kitchen is the banquette area, which Gamble states she had planned to include from the beginning and “just needed to convince the client that it would turn out amazing.”

And it did. The neutral-based custom- cushioned seating, the wooden table and the fun, ultra-modern acrylic chairs join together flawlessly to create a picture-perfect banquette set-up.

The particular gem in this corner area, however, is the vibrant, large-scale modern art piece that carries over the same bold blue from the other side of the room.

“My client is great friends with the artist Ilana Greenberg, so we thought using her art above the built-in banquette would be ideal,” Gamble says. “This banquette is where the family eats most of their meals, so we wanted to make it comfortable and great looking at the same time.”

Finishing off the general aesthetic are the various gold accents placed throughout the space, such as the cabinet and refrigerator hardware, faucet and gold-lined hanging light fixtures. These elements pair stunningly with the dark navy and white combination, adding richness and a sophisticated allure.

Gamble concludes that the final overall design is exactly what she had envisioned and what her client wanted, which is a super functional and beautifully designed kitchen that is “crisp, clean and not even the least bit fussy.” JN