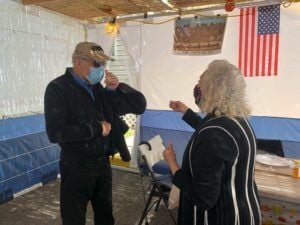 Israel “Sasha” Eisenberg and Ruth Brandspiegel reunite in a sukkah. 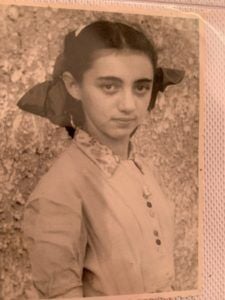 Ruth Brandspiegel as a child. 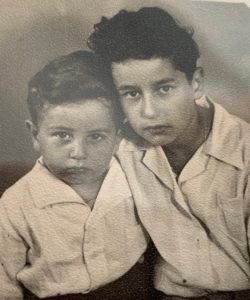 Cantor Larry Brandspiegel believes everything happens for a reason.

It certainly seemed that way when his mother, Ruth Brandspiegel, was reunited with a long-lost friend during the High Holidays this year. That friend, Israel “Sasha” Eisenberg, turned out to be one of his congregants in New Jersey.

“It’s bashert. Everything had to fall into place,” he said.

Eisenberg, 79, and Ruth Brandspiegel, 84, met as children in the displaced persons camp of Hallein, Austria, after World War II. Their families shared living quarters and soon realized they both hailed from the town of Ciechanów, Poland. Brandspiegel’s family fled to Ukraine when the Germans took over in 1939. Both families were transported to labor camps in Siberia during the war, but did not cross paths while they were there.

Brandspiegel, who was then known by her Polish and maiden names, Regina Puter, went back to Poland briefly with her parents, where they learned of the horrific fate of the Jews who had not been able to escape from Europe. They were forced to flee anti-Semitic violence after only a few months and ended up in Austria in 1946.

The families met when Brandspiegel was 12 and Eisenberg was eight. Brandspiegel’s father took the boy and his little brother, Motek Eisenberg, under his wing after their father died in a car accident.

“When my father died, her father, who was a very religious Jewish man, he was the one who took me to the little synagogue that the refugees in Hallein established. And he would take me there to say kaddish, which is a prayer for the orphan,” Israel Eisenberg said.

Their families would often have Shabbat dinner together and reminisce about their old home in Poland. Brandspiegel and the Eisenberg brothers also attended school together.

The Eisenbergs eventually left the camp to move to Israel in 1949.

Brandspiegel remained with her parents until 1952, when they moved to Philadelphia to be with her mother’s family.

Eisenberg left Israel in 1964 to go to college in New York. He met and married his wife Marsha Eisenberg in 1967 and settled in New Jersey. He had no idea that his old friend was living about an hour away in Philadelphia. He and his wife joined East Brunswick Jewish Center in the 1990s, and Larry Brandspiegel joined the staff in 2018.

The chain of events that led to the friends’ reunion began on Yom Kippur. Due to the pandemic, the Jewish center decided to make the virtual services free and asked attendees for donations. If congregants donated, they would receive a dedication, or shout-out, during an ark opening or Torah portion.

Marsha Eisenberg decided to make a donation even though she and her husband did not attend services very frequently. Instead of writing her husband’s given first name, Israel Eisenberg, she submitted his Russian nickname, Sasha, which is how he is known to friends and family, and how Brandspiegel knew him all those years ago.

Larry Brandspiegel helped Ruth Brandspiegel use Zoom to attend the virtual services. As she watched her son daven from her home, she was stunned to hear Rabbi Jeff Pivo call a name she hadn’t heard for many decades.

“All of a sudden, he called ‘Sasha Eisenberg,’” she said. “And this got into my mind, because how many Sasha Eisenbergs are there? There are a lot of Eisenbergs, but not Sashas!”

After the service, she asked her son to find out if Eisenberg was a member of his synagogue, and if so to get his phone number and give him a call.

Larry Brandspiegel got Eisenberg on the phone.

“Sasha called me and both of us were crying on the phone. Seventy one years since, I haven’t seen him, or talked to him,” she continued.

Larry Brandspiegel hosted his mother and sisters for lunch on Oct. 3 and invited the Eisenbergs over to join them for a masked meeting in a sukkah.

When they arrived, the old friends couldn’t recognize each other, but Eisenberg joked that Brandspiegel looked exactly the same.

“We were so excited, both of us. I was crying. And if I would have seen him on the street, I would never recognize him, of course not. He’s an older man now. And I remember him being so cute,” she said. “I mean, it’s so unreal. My son is more excited than anything that it happened in his synagogue.”

They shared stories about their lives and photos of themselves and their families. Eisenberg told Brandspiegel the story of her father taking him to say kaddish in the little camp synagogue.

“She didn’t remember that event. And when I told her that we both had tears in our eyes, it was so emotional,” he said.

They were overjoyed to see each other, but fear of coronavirus prevented them from embracing. Larry Brandspiegel said they look forward to the day they could give each other a hug, and that he hopes to host a special service in their honor after the pandemic.

“It’s a testament to the survivors. That’s what it really comes down to. No matter how long it’s been, no matter what you go through, with perseverance, love, all these things, miracles can happen,” he said. JN