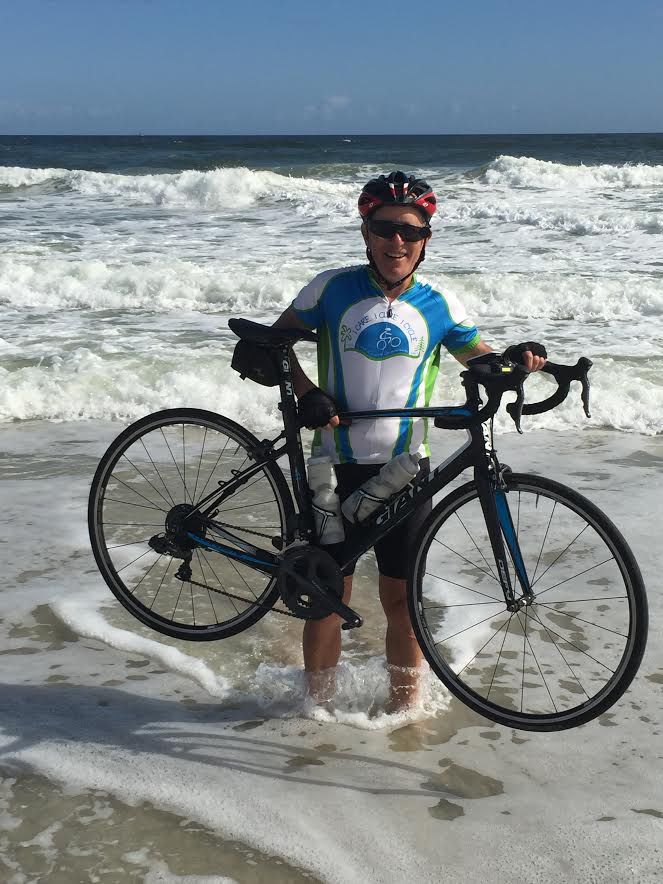 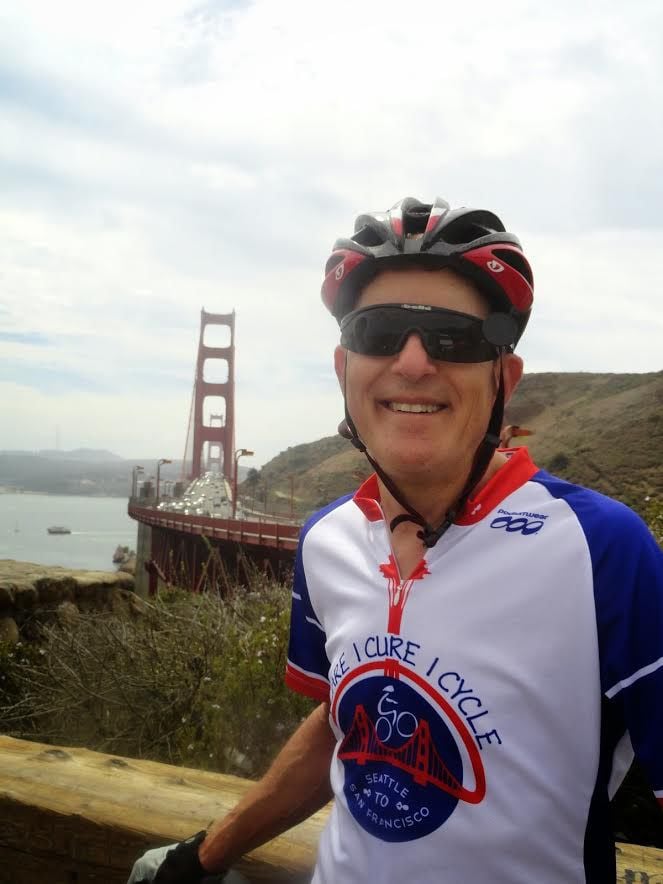 With the Golden Gate Bridge at his back, Glenn Hirsch completes his bike ride from Seattle to San Francisco in 2014. He made the trek to raise funds for the I Care I Cure Childhood Cancer Foundation, in memory of his nephew, Ian Besner.

With the Golden Gate Bridge at his back, Glenn Hirsch completes his bike ride from Seattle to San Francisco in 2014. He made the trek to raise funds for the I Care I Cure Childhood Cancer Foundation, in memory of his nephew, Ian Besner.

When Glenn Hirsch was a teenager, he dreamed about someday riding his bike across the United States. When he turned 50, he figured he’d better get started.

This week, at age 67, Hirsch sets out to complete the final leg of his 10,000-mile journey around the perimeter of the United States, as he bikes from Phoenix to Santa Monica, California.

The family physician from Georgia began his cycling adventure in 2000, soon after his 50th birthday when he took seven weeks off work to ride in the American Lung Association’s Big Ride.

After completing the ride, Hirsch had a heart attack and required open-heart surgery six months later. Hirsch thought that might be the end of his dream, but after he recovered, he returned to cycling and in 2004, rode from San Francisco to Los Angeles, finishing at the Santa Monica Pier, to raise money for the Arthritis Foundation.

In 2006, his 11-year-old nephew, Ian Besner, died from leukemia. To help cope with the tragedy, his sister-in-law and her husband founded the I Care I Cure Childhood Cancer Foundation in his memory.

“This is when our life became a personal journey to use Glenn’s love of cycling to honor Ian,” said Hirsch’s wife, Lynn.

Since 2009, Hirsch’s trek has raised funds for the foundation, which is dedicated to increasing awareness and support for targeted therapies for childhood cancer. Lynn, who escorts Hirsch in an automobile as he rides solo, documents her husband’s journey in a blog, icareicureicycle.blogspot.com.

This week’s trip, Dec. 20-29, will end at the Santa Monica Pier. Family and friends are expected to accompany him on the last day for a ride from Venice Beach to the pier.

“It’s a family affair,” Lynn said. The couple has relatives in Phoenix and will celebrate Chanukah with them before heading to California.

On a typical day, Hirsch leaves the hotel on his bike in the morning and Lynn leaves a few hours later in the car to catch up with him to see if he needs anything, such as water or tires. Then she’ll drive to the next hotel and wait for him to arrive.

In more desolate areas, she’ll remain closer, driving 10 miles or so and then waiting for him to catch up.

In fall 2016, during a ride through desolate terrain between Phoenix and New Orleans, Lynn got pulled over by the U.S. Border Patrol because the officer was suspicious of her parking on the side of the road.

“The only thing separating us from Mexico was a field,” Lynn explained. She told the agent that she was waiting for her husband and he ended up waiting with her until Hirsch caught up to them.

Although the weather conditions have usually been favorable, Hirsch has ridden in 95-degree weather in Arizona and during a thunderstorm in Maine.

“He insisted on continuing riding and when it was just raining, he would ride,” Lynn said. “Every time there was a clap of thunder or lightning, I would pull up and he would sit in the car until the thunder and lightning stopped and then he’d get out and ride again soaking wet.”

When the riding gets tough, Hirsch said he thinks of his nephew, Ian, and that propels him to continue.

Although this may be the last of his solo rides, Hirsch still rides his bike to work on most days — a 12-mile trip — and doesn’t plan to give up cycling anytime soon.

He said one of his favorite memories is the scenery of the Pacific Northwest.

“When the world goes by as fast as you can pedal,” he said, “things have a tendency to slow down.” JN

To learn more about the ride, visit icareicure.org/icycle2017. Leisah Woldoff is a freelance writer based in Phoenix.