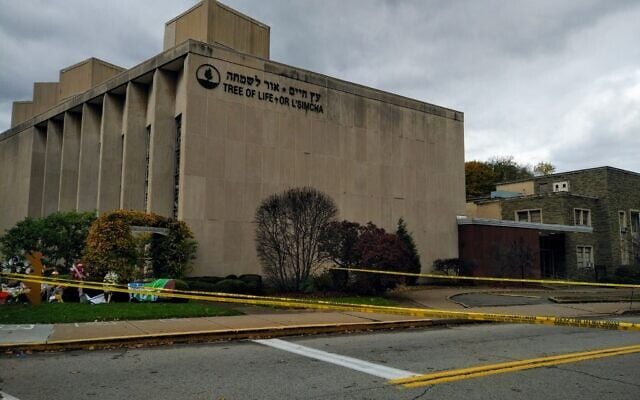 The Tree of Life building days after the attack. 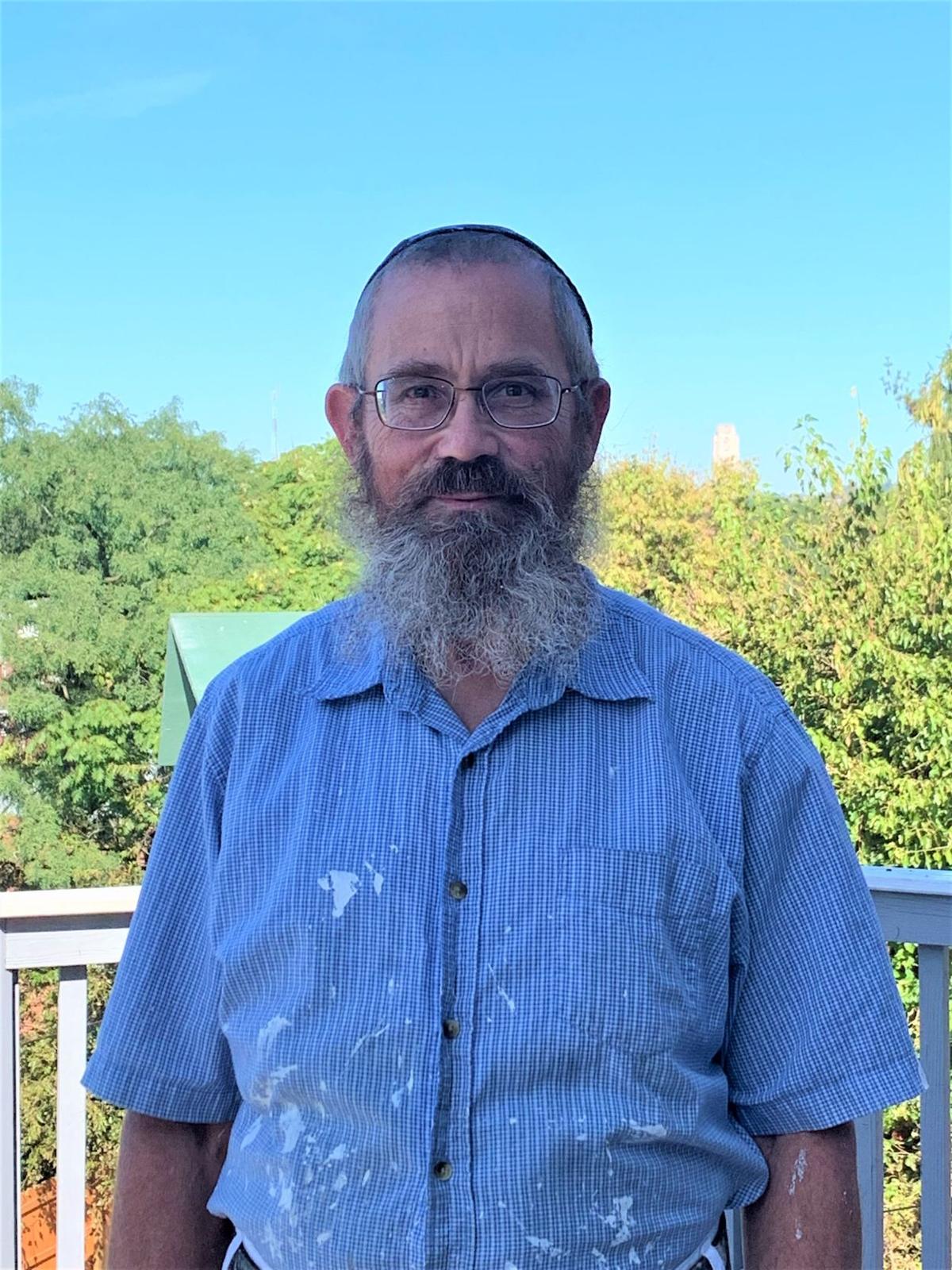 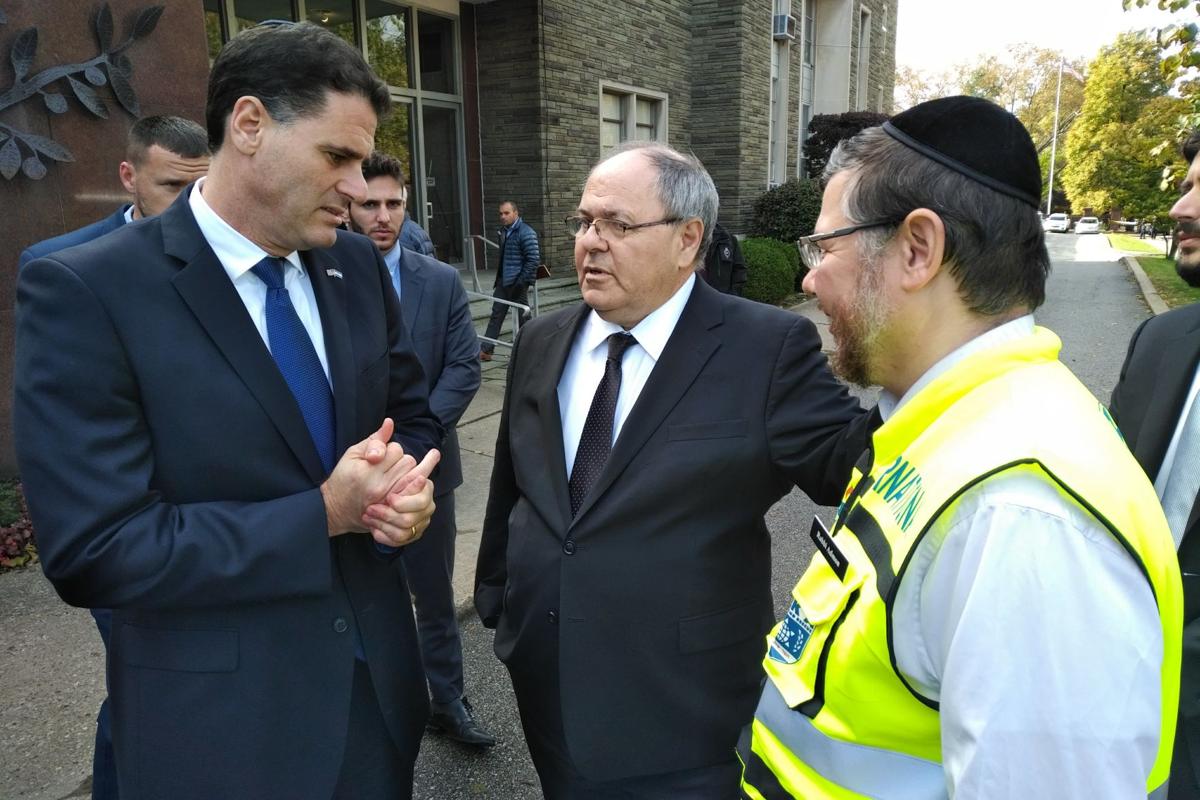 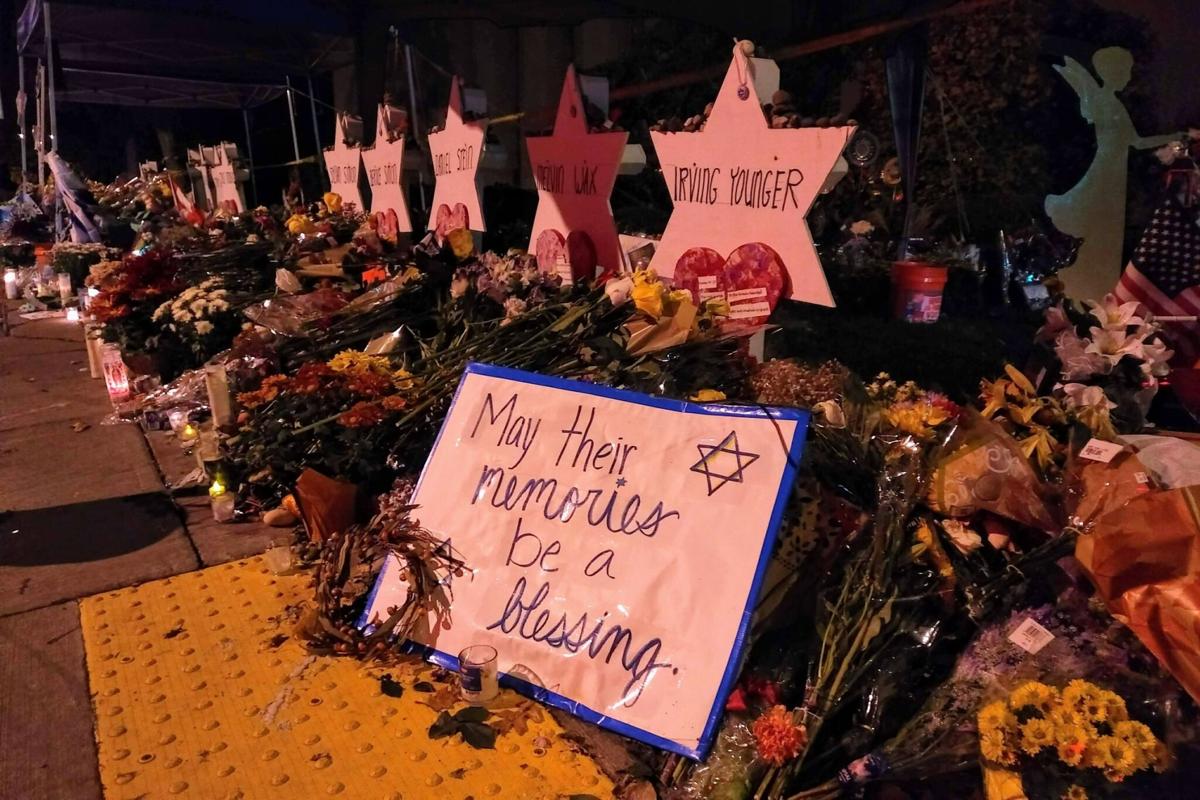 Days after the attack, a makeshift memorial was formed outside the building. 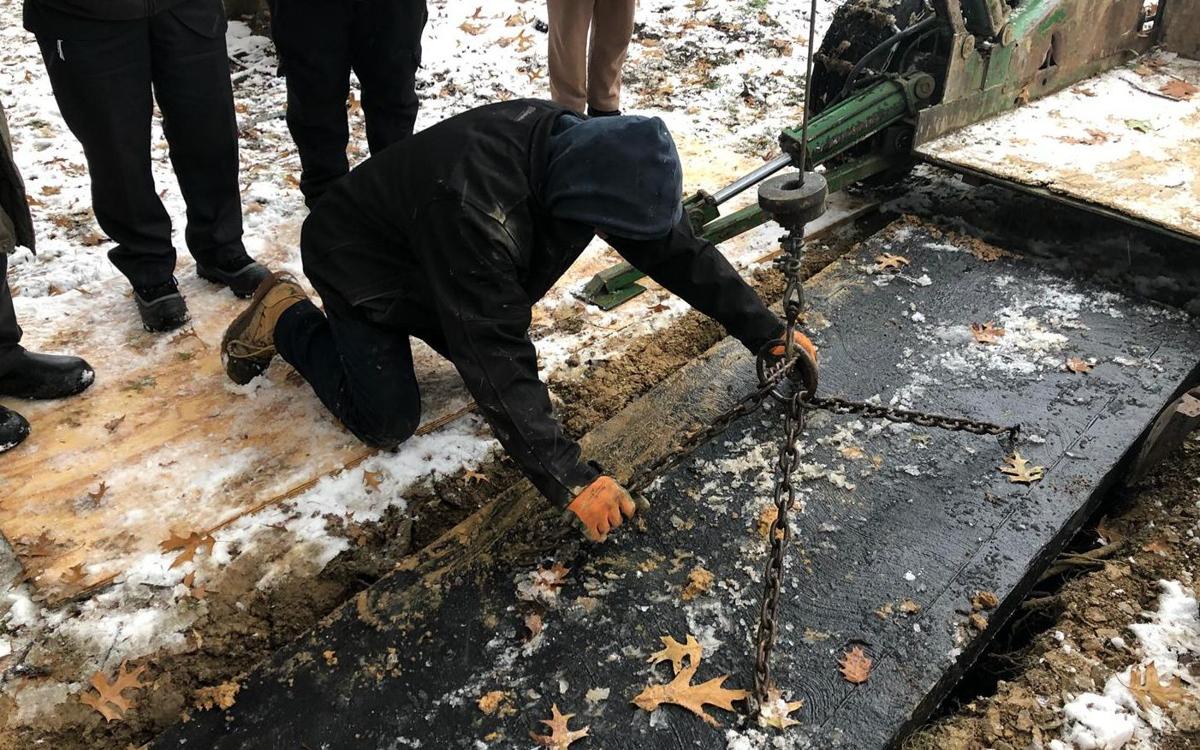 The Tree of Life building days after the attack.

Days after the attack, a makeshift memorial was formed outside the building.

When Yitzchok Gordon arrived at the site, he didn’t bring scaffolding. He wasn’t sure what the job required. Gordon didn’t know whether he needed spackle, scrapers or other materials regularly used for covering up blemishes or altering spaces. What Gordon, a professional painter, realized as he exited his car was that it was night and raining. Streets surrounding the corner of Shady and Wilkins avenues were closed to traffic so Gordon, 63, parked as close as possible. He ambled past barricades and huddled with others beneath a small canopy near the Tree of Life building. It was almost 1 a.m. on Oct. 28. The rain was unrelenting and the bodies of 11 murdered synagogue-goers still remained indoors.

Word had earlier spread that officials overseeing the scene would permit members of the Jewish burial society to escort the dead from the building — accompanying the deceased, or watching over their bodies before burial, is a traditional Jewish practice performed by the chevra kadisha.

Gordon, a 15-year member of the group, came from his Greenfield home ready to assist.

During the rabbis’ time inside, first around 9:30 p.m. on Oct. 27 and again several hours later, they observed the scene with FBI assistant special agent in charge Nicholas Boshears, strategized the cleanup and recited prayers for the dead, said Admon.

Three days later, on Tuesday, Oct. 30, Gordon and six other members of the society were allowed indoors. During that first shift, volunteers were directed downstairs. Their purpose wasn’t merely to clean a rampaged space, but to retrieve any blood or organic matter, as according to Jewish law, all human material, to the best extent possible, must be buried.

Prior to that day, Gordon had never entered the Tree of Life building. He didn’t know the congregational histories, the rabbis, the victims or the families left grieving.

It made no difference, however. “I wanted to be part of taking care of our community, and I think everybody who was there wanted to,” he said.

Gordon scrubbed, scraped and wiped for hours. He followed Admon’s instructions, as the Israeli educator and mohel had seen similar carnage overseas.

During his time with Zaka, a network of voluntary community emergency response teams, Admon formerly gathered bodily remains for proper burial after terrorist attacks, car accidents or disasters in the Jewish state.

“We had a case on Pesach where it was an Arab-Israeli restaurant,” Admon told the Chronicle. “Matzah, wine and bread, this was the smell, and I remember we laid down a family — a father, mother and two kids next to each other because it was a family who died. You remember these pictures.”

Admon related the story and prepared the group as best as possible.

Gordon attentively listened and recalled his own years of helping Pittsburgh’s chevra kadisha, but found the events following Oct. 27 quite different.

“It was kind of surreal because we’re doing all we could but there were no bodies,” he said. “I have been on the chevra kadisha for about 15 years or more. I have prepared hundreds of men for burial. There’s always been a body and here there was just what was left.”

Days passed, the FBI conducted its investigation, and on Tuesday, Nov. 6, a second clean-up shift was held. During that session, Gordon, members of Gesher Hachaim and the New Community Chevra Kadisha, were permitted upstairs, though a warning was issued.

“Before we came for that second shift, they told me that there was bodily material to clean off the ceiling,” he said.

Gordon retrieved two 6-foot ladders and an extendable plank. He assembled the apparatus, climbed the portable scaffolding and applied hydrogen peroxide. Baby wipes and spackle knives were also used. Throughout the process, Gordon and others wore disposable white jumpsuits, which like the matter collected, were ultimately buried. For mental health purposes, regular breaks were taken, and during those periods meals and refreshments were readily available.

“Everyone mixed together, and we didn’t really talk about what we were doing. We just found out more about who we were working with,” said Gordon.

“I can only speak for myself, but I think it’s true that all of us felt a tremendous sense of purpose and meaningfulness to be there, to honor the victims and bring some closure to ourselves,” said Gordon.

As the volunteers meticulously made their way through the spaces, there was a shared feeling that regardless of one’s affiliation or history with the building, “this is my synagogue,” noted Gordon. “We all felt like we’re all together in this. We all care about each other. We could all be victims here if the circumstances were just a tiny bit different.”

Gordon returned for a third shift on Wednesday, Nov. 7, but by then much of the work was already finished. Even still, he brought his 23-year-old son.

“We work together in my business, when he’s in town, painting, and this was something that we could use our talents and our abilities for in something completely different than painting a house. It was a very special bonding experience that nobody wishes for,” said Gordon.

A fourth shift was scheduled for Friday, Nov. 9. Gordon registered again. Along with Admon and a few members of Pittsburgh’s two chevra kadisha, Gordon transported remnants of bloodied carpets and garbage bags filled with darkened wipes, ruddied sponges and dirtied jumpsuits to vehicles parked nearby. The small volunteer corps then drove to cemeteries belonging to Tree of Life and New Light congregations.

Because “we didn’t know whose blood that was,” common graves were used in each location, said Gordon.

Little was said throughout the day. When the final grave was covered and the last “Kel Maleh Rachamim” concluded, Gordon returned home and celebrated Shabbat.

“I was fortunate enough to move around my schedule and be there for everything,” he said. “But I would like it to be emphasized that everybody there who was part of the cleanup is a hero.” Whether someone was able to be there for one shift, or even a part of a shift, “we all equally valued what we did,” continued Gordon. “All had equal value and all made equal contributions.”

In the year since Gordon performed those duties, his life hasn’t changed. During the week, he still transforms interiors and exteriors across the city. On Saturdays, Gordon continues to split his time between Congregation Bnai Emunoh in Greenfield and the Lubavitch Center in Squirrel Hill, and he still serves as a member of the chevra kadisha. But not surprisingly, certain events trigger memories of the two weeks he cleaned and painted.

“I suspect, and it’s true for me, that everyone who did the cleanup on some level was traumatized by it — that it was more to process than we could process at the time we were doing it — I know that’s true for me, because when the shootings happened in California, in Poway, on Shabbos, and somebody came into the shul [and told us] I started crying, I felt retraumatized because although I wasn’t there and I never saw any bodies at all, and I didn’t do any of the taharas for the victims, I know what that looks like.”

While Gordon can’t unsee the past, he has a better sense now of life’s fragility.

“I now know that any of us could be victims of violence at any point,” said Gordon. “So life is more precious to me, and I have definitely more urgency to be as much of a mensch that I can, and to be less petty and be more forgiving and be more purposeful because of what I’ve seen and what I had to clean up.”

“Our differences are far, far less important than what we have in common. If we’re Jewish, that transcends how we worship, where we worship, or if we worship,” said Gordon. “None of that is particularly significant in my opinion, as much as that we need to respect and care for each other, appreciate each other and tolerate each other and like each other. And if we’re not Jewish, I don’t think there’s any difference in what I would like people to do anyway. We all have a common humanity and I never want to have to be reminded of it in the same way.” JN

This article originally ran in the Pittsburgh Jewish Chronicle, a Jewish News-affiliated publication.

Vaccinations and the elderly

What kind of elder will you be?