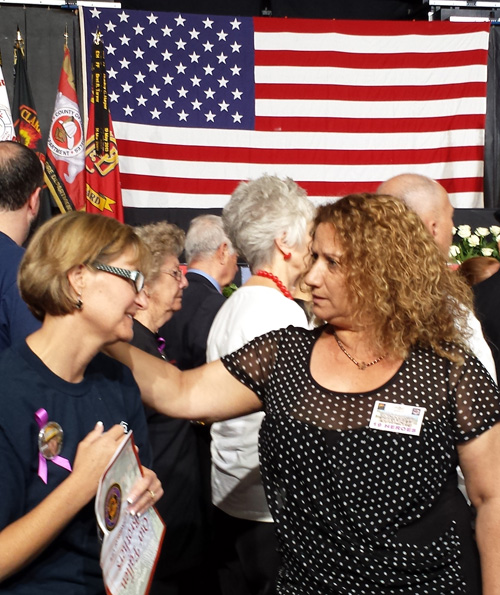 Bat-Sheva Hayat, the mother of Israeli firefighter Danny Hayat who died in Israel’s Carmel fire in 2010, right, attends the July 9 memorial service for the Yarnell 19 in Prescott Valley. She also spoke that night at the JCA tribute. 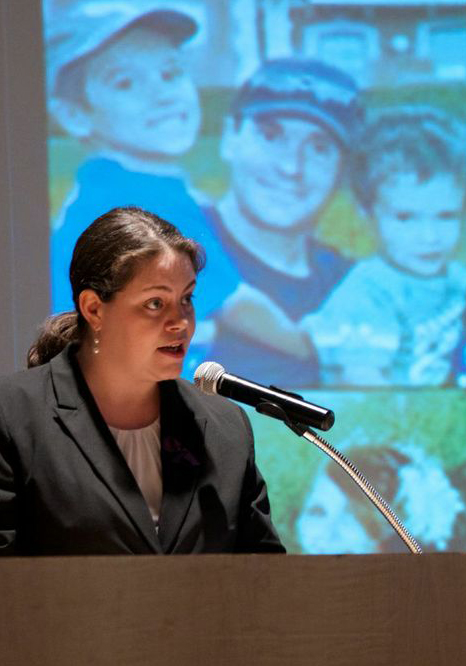 Rabbi Jessica Rosenthal of Temple B’rith Shalom in Prescott speaks at the Jewish Community Association’s tribute to the Yarnell 19.

Bat-Sheva Hayat, the mother of Israeli firefighter Danny Hayat who died in Israel’s Carmel fire in 2010, right, attends the July 9 memorial service for the Yarnell 19 in Prescott Valley. She also spoke that night at the JCA tribute.

Rabbi Jessica Rosenthal of Temple B’rith Shalom in Prescott speaks at the Jewish Community Association’s tribute to the Yarnell 19.

The signs of tribute at the Ina Levine Jewish Community Campus were many: a composite photo of the 19 Granite Mountain Interagency Hotshot Crew that was projected throughout the event in the large gathering room, Scottsdale firefighters seated somberly in a row, a Scottsdale fire battalion chief reading the names of the fallen, a moving invocation of El Maleh Rahamim in their memories, dignitaries on hand to speak and a heartfelt speech from the mother of a fallen Israeli firefighter.

“None of us will be able to hear the number 19 quite the same,” Rabbi John Linder, of Temple Solel, told the audience of about 100 gathered for the July 9 event, arranged by the Jewish Community Association of Greater Phoenix. The speakers included Stuart Wachs, the JCA’s president and CEO, who said that even though he has only lived in Arizona for a year, he felt the tragedy as an Arizonan, and Scottsdale Mayor Jim Lane, who said, “We should be forever grateful and never forget their willingness to face down these wildfires.”

The evening tribute to the Yarnell 19 — as the wildland firefighters who died June 30 fighting the Yarnell Hill Fire in Yavapai County have come to be known — showed that the tragedy’s impact was felt worldwide.

“As a bereaved mother, I wanted to express thanks to our American friends,” said Bat-Sheva Hayat. The mother of Danny Hayat, one of the firefighters who died in Israel’s deadly Mount Carmel forest fire in 2010, had traveled to the United States to attend the memorial service in Prescott Valley that morning and to join with her daughter-in-law, Hofit Hayat, the firefighter’s widow, at this event in Scottsdale.

“[Danny] believed that his purpose in life was to save human beings, and [the Yarnell 19] had the same trait,” she told those gathered at the campus.

“This kind of courage that firefighters have transcends borders,” noted Uri Resnick, deputy consul general of Israel in Los Angeles, earlier in the tribute program. He and Bat-Sheva Hayat both expressed gratitude for U.S. aid during the Carmel fire.

“Distance is vanished,” Resnick said in describing the solidarity of firefighters worldwide and the reach of the tragedy. That solidarity, he said, underpinned the Hayats’ decision to come to Arizona from Israel for these memorials “to express condolences.”

Before Hayat spoke, there was a moment of silence followed by El Maleh Rachamim, sung by Todd Herzog, cantorial soloist at Temple Solel. Hayat was followed by Rabbi Jessica Rosenthal, spiritual leader of Temple B’rith Shalom in Prescott, the town where the Yarnell 19 worked in the only wildland fire crew in the nation that is part of a municipal fire department.

“For most of us, we are in shock,” she said. “Prescott is a small town.” Everyone in her town, she said, had some connection, whether they were friends with one of the firefighters or a friend of a friend, to the loss and grief. “Incredibly, through the pain, we have found each other,” Rosenthal said.

“It’s sad for me that it takes such a tragedy for us to remember [the sacrifices firefighters, police and the military] make every day,” she said.

The next morning, Valley resident George Weisz attended funerals for five of the Yarnell 19. As president of the 100 Club of Arizona, which raises funds throughout the year to provide immediate financial assistance to the families of firefighters and police officers killed or seriously injured in the line of duty, he was at the memorial service in Prescott Valley as well.

“The very first thing we did was to deliver within 24 hours ... about $15,000 for each of the families,” Weisz told Jewish News by phone. “We’re an organization that I wish didn’t have to exist.” However, the need is great whenever one of these tragedies strikes, and especially when it’s on such a historic scale. The 19 deaths was the highest death toll in a single incident in Arizona firefighting history. “We paid for most of the family members to come in from out of state for the memorial and the funerals,” he said. “It’s ongoing and we’ll be helping [them] weeks from now, months from now, and maybe even years from now, providing scholarships for their kids.”

To learn more or to help, visit 100club.org.