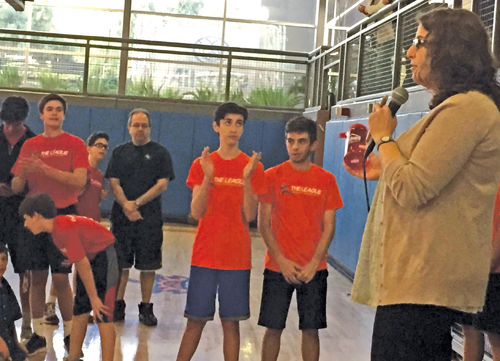 Debbie Yunker Kail, executive director of Hillel at ASU, talks to League participants about Hillel’s offerings at ASU and campuses across the country. 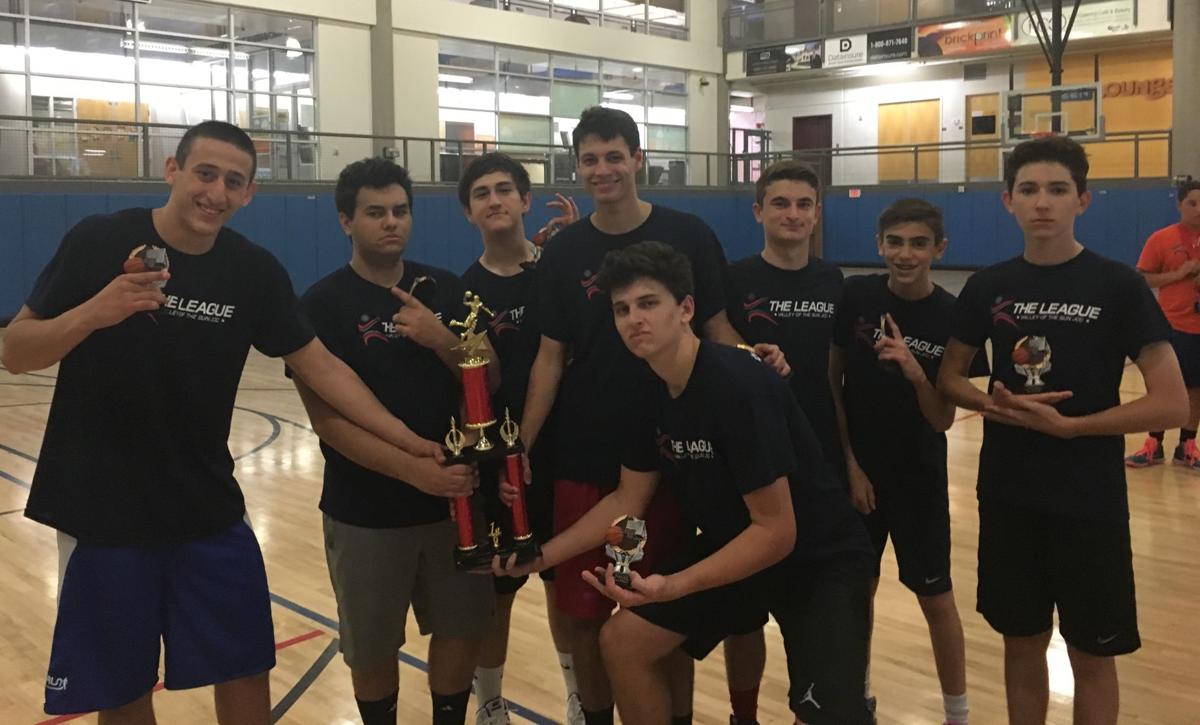 The Kennedy AZA team beat the Jonas Salk team in a championship match-up of two BBYO groups in the Jewish Youth Group Sports League's ultimate game on May 1.

Debbie Yunker Kail, executive director of Hillel at ASU, talks to League participants about Hillel’s offerings at ASU and campuses across the country.

The Kennedy AZA team beat the Jonas Salk team in a championship match-up of two BBYO groups in the Jewish Youth Group Sports League's ultimate game on May 1.

This isn’t a sports story, even though it’s about the Jewish Youth Group Sports League, which recently completed its first season of basketball play at the Valley of the Sun Jewish Community Center in Scottsdale. No, this is a story about community-building.

However, sports was the hook to bring this community-building effort together.

The collaboration among local BBYO, USY, NCSY and NFTY chapters and the JCC made the games a central gathering place for Jewish youth in grades 8-12 on Sunday evenings.

The first season of “the League,” as it’s affectionately known, began Jan. 31 with 80 teens playing on nine basketball teams, and it ended with playoffs on May 1 in which Kennedy AZA (a BBYO chapter) beat Jonas Salk (another BBYO chapter) for the first League title.

“It was a really tough game,” said Aaron Nach, who played on the Salk team and was enthusiastic about the League from the start.

“When my adviser handed me the paper [to sign up], I wanted to do it right away,” he said. “I wanted to get everyone involved around me to do it, and I thought we’d have a really good team and it would be a really great experience for everyone in my chapter and the Jewish teen community as a whole.”

So much so that he created a Twitter account to help boost the League. “I reached out to all the youth groups and just tried to get them connected to bring more people into the League,” including those who weren’t playing, “so that we could get bigger crowds.” (He recalled, “There were 15 teens from [another] youth group cheering for their team, and I thought that was really cool.”)

He said that playing in the League helped him learn a little bit about the other youth groups. For instance, “I really had no idea what NFTY was and who was involved in NFTY” before playing in the League. He said he made new friends and reconnected with friends he played basketball with years ago, too.

Not only were youth group members in the stands, but so were parents and grandparents. Beth Jo Zeitzer, mother of Aaron and Adam Nach (the brothers both played for Salk), said she attended every game.

As much as the League was about the young players having fun, she said, “More importantly, it was really a great community-building activity” and not only for the youngsters. “We were certainly able to get to know some parents that maybe we didn’t know or hadn’t engaged before, so I think it was a really great opportunity for a lot of community-building.”

“The hope with the League is to create excitement about being a Jewish teen in Phoenix and to create a new touch point for youth groups to draw in new teens,” said Jennifer Schwarz, who co-founded the League with her husband, Steven (who chairs the Jewish Federation of Greater Phoenix board). “Even in this pilot season, several new teens joined a youth group because they wanted to play basketball. We then encourage the youth groups to actively cultivate these new teens to incorporate them fully into other youth group programming they offer.”

The League also invited other youth-oriented organizations to provide information at the games. Debbie Yunker Kail, executive director of Hillel at Arizona State University, accepted the offer in a big way, turning up one night to present “water bottles co-branded with Hillel and The League logos” to all the participants. “During our brief presentation, I told them that we were excited that they were involved in a Jewish youth league and wanted to make sure they knew that Hillel would be here for them on whatever campus they end up on,” Kail said via email.

“We are in the process of surveying youth group directors, teens and parents to determine the structure and sports offerings for next year,” Schwarz said. “Basketball will definitely be included.”

Nach, who will be a high school senior next semester, can’t wait: “Oh, yeah! I want to get that championship.”