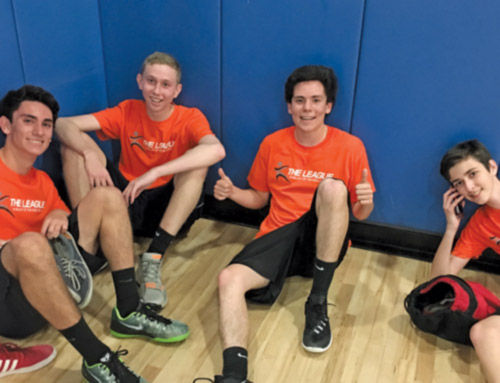 From left, Reuben Nach, Ethan Schnaid, Aaron Nach and Quinn McVeigh of Salk AZA/BBYO hang out on Feb. 14 during the Jewish Youth Group Sports League, which is affectionately called “The League.” 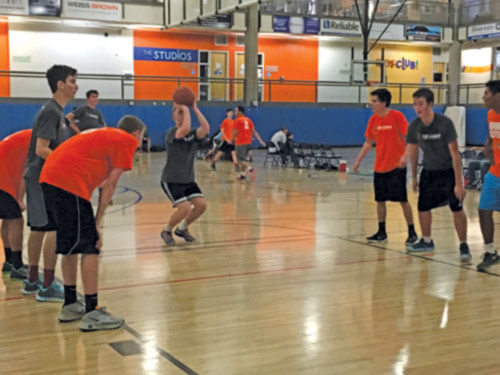 The Salk AZA team (in orange) plays the NCSY J Mensches on Feb. 14.

From left, Reuben Nach, Ethan Schnaid, Aaron Nach and Quinn McVeigh of Salk AZA/BBYO hang out on Feb. 14 during the Jewish Youth Group Sports League, which is affectionately called “The League.”

The Salk AZA team (in orange) plays the NCSY J Mensches on Feb. 14.

The League is, without a doubt, the best place for Jewish teens to be on a Sunday night, when 80 teens from local Valley Jewish youth groups come together to play basketball, eat pizza and cheer on friends. Many more attend just to socialize and be part of the excitement.

Teens from NFTY, BBYO, USY and NCSY play four games each week, 5-7 p.m. Sundays, at the Valley of the Sun Jewish Community Center.

On Feb. 14, Kennedy 2 AZA beat TCTY Tornadoes and NCSY beat TCTY Tucker Wynns, the latter being an extremely close game, with a final score of 47 to 45. Salk AZA beat NCSY in another close game and USY beat Kiviat BBG.

Aaron Nach, a junior at Sunny-slope High School and member of the BBYO Salk team, said of the League: “I love how the League brings Jewish teens from all around the community to play fun and competitive basketball. I had a lot of fun playing with my brother and my friends while scoring a lot of points, as well!”

Players spend two hours at the games – one hour playing and the other hour socializing and watching. Fans are encouraged to come dressed in their favorite team’s colors and some even sport signs. The chapter that demonstrates the most ruach (spirit) will receive an award at the end of the season. Also each week, the teens who attend – both players and fans – can enter a drawing to win a pair of Studio Beats headphones at a season-end raffle.

The League is also quickly becoming the center of information about teen activities across the Valley. Jewish organizations are encouraged to submit promotional “blurbs” and fliers to be included in the League’s weekly newsletter that will be distributed to parents and teens each Sunday.

Even though games were held over Presidents Day weekend and there were also many out-of-town youth group conventions that conflicted with the League, they still drew tons of teens and fans. “We were a little concerned about moving forward with games this week because of the numerous conflicts, but were pleasantly surprised by the terrific turnout,” said Steven Schwarz, League co-chair. “The teens are responding and we couldn’t be more excited about it.”