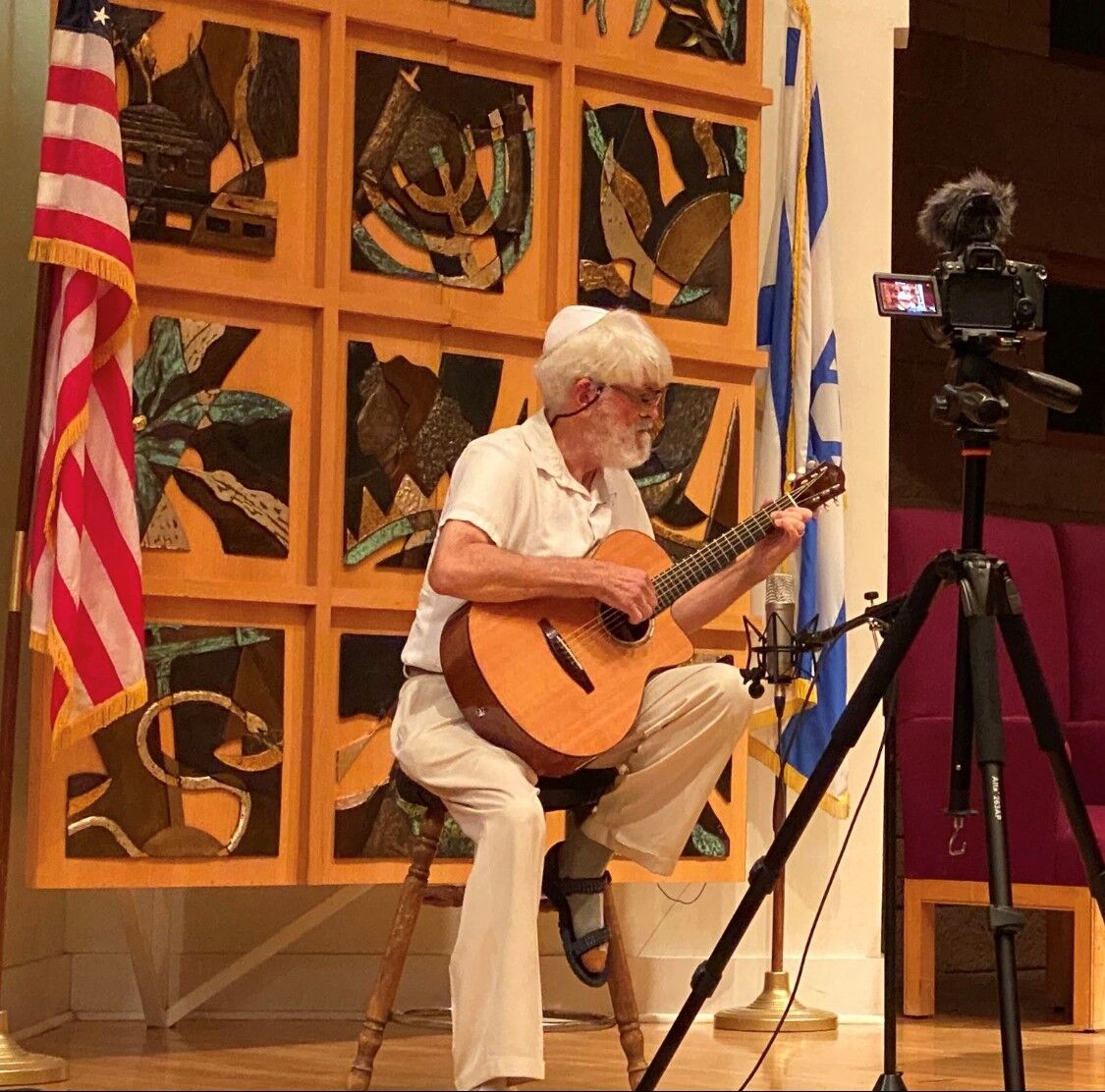 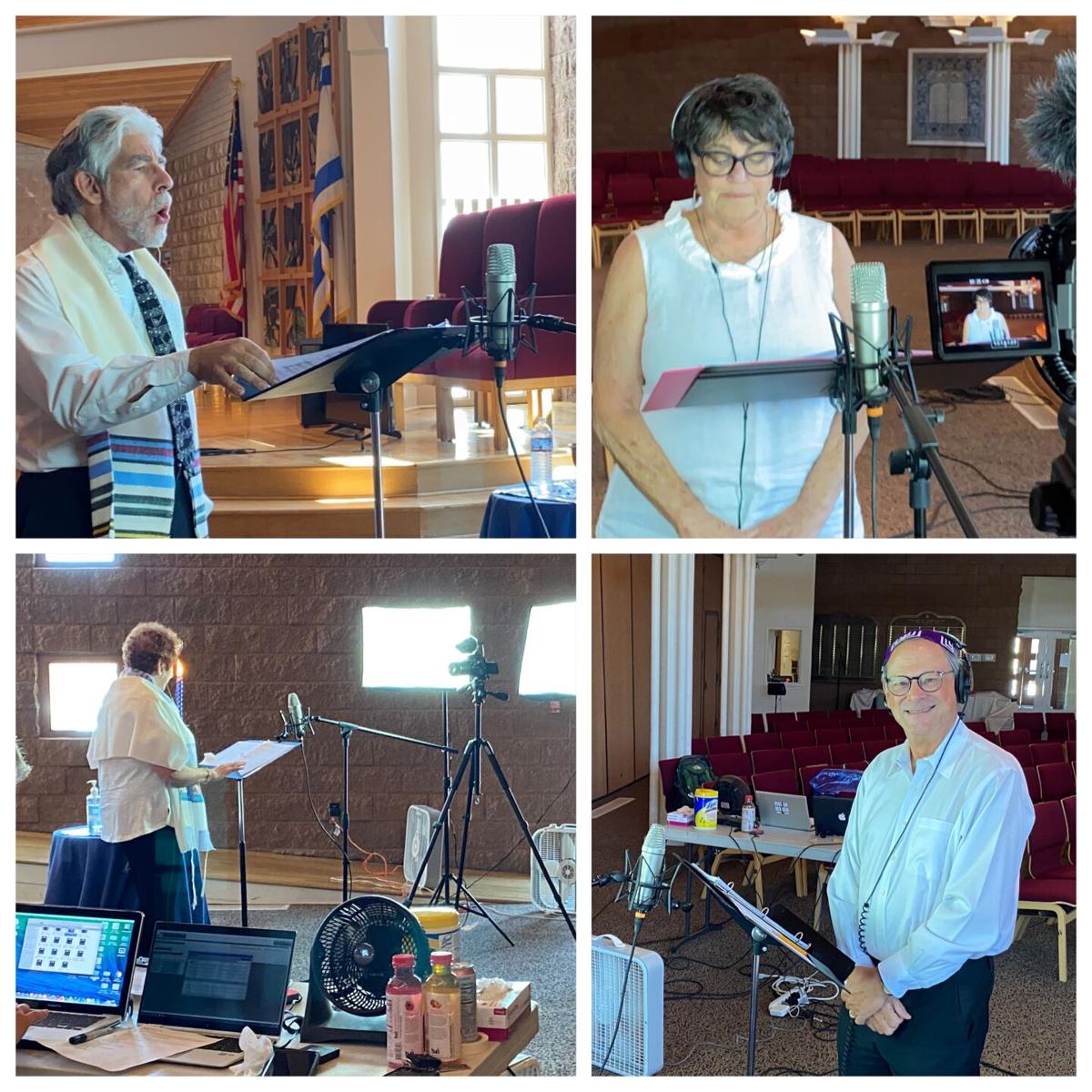 Nancy Dallett was apprehensive when Cantor Ross Wolman of Temple Chai asked her and other choir members to come in one by one to record music for the High Holidays. He planned to compile the sessions into a special musical video for this year’s Zoom services.

A few rehearsals helped, but having learned over the years that when she was unsure of the melody exactly or the pronunciation of the Hebrew, she could lean on another member who knew them both better, she was nervous to record her part alone. Not wanting to leave anything to chance she studied diligently so that she would know the Hebrew, the melody and the pitch without that little crutch.

Ultimately, “none of my apprehensions really mattered,” Dallett said, “because once you’re part of the whole chorus, you can’t pick out any one particular singer anyway.”

Over the years, Dallett sometimes wondered how the congregation felt about the choir. Did they value it or relate to it at all? The video really brought home to her the importance of the choir and the music. “Seeing familiar faces made you feel at home in the service,” Dallett said. “It really added a whole important aspect to the High Holidays, and I hope it’ll bring people some sense of comfort.”

For many congregants who attended High Holiday services over Zoom, the loss of being together was difficult, and several pointed out that not singing together was a poignant reminder of the subtler things the coronavirus stole this year. Innovative videos, like Wolman’s, and creative programming were key in filling the gaps.

Zoom and other platforms have a lag time, so congregants find themselves muted to avoid a cacophony of strange sounds and badly timed voices. Those used to singing in unison now mostly just listened as the cantor or song leader sang alone.

At Ruach Hamidbar-Spirit of the Desert, Rabbi Sarah Leah Grafstein, who is also a videographer, said she hopes that platforms other than Zoom develop quickly. She tried unmuting the congregation to hear a bit of communal singing, but “all the voices just mushed together, and while some things are OK that way, in general you can’t hear anything — you’re just limited.”

But her congregants didn’t complain. “Let me tell you, people do complain when they’re upset,” she said. “This is all crazy, but people understand.”

Stan Coffield, president of Temple Beth Sholom of Lake Havasu City, said watching over Zoom was “rather bizarre.” For the last 61 years he’s attended services in person, and to find himself at home, in shorts, watching services on a computer screen was hard. Singing alone was particularly strange. He laughed that maybe he and other members don’t have the best voices, but being muted seemed to add insult to injury. Still, he said, “you do the best you can.”

Cantorial soloist Mike Robbins of Beth Ami Temple agreed. It’s always preferable to have people interacting because of the way people feed off one another, but it’s also important to have these Zoom options even with technical difficulties — especially for older congregations like his who are at a greater health risk, he said. And once he started performing, although he missed the warmth of people’s singing, the music still brought out the service’s feeling.

Robbins even gained a groupie: A congregant told him that a friend in her retirement community watching services over Zoom “now is basically in love with me or something,” he joked.

While Wolman was excited to create a virtual choir video that would bring joy to people, he is frustrated to be in this position.

“It’s infuriating,” he said. “We are doing everything to be safe and our best to be patient, but we’re longing to be together and who knows when we will be? Even then, we’ll probably have masks, and singing is even three steps further down the road.”

“The services, the singing — it was just a very lonely experience,” said Tom Behrendt, Beth Emeth Congregation of the West Valley’s vice president.

Rabbi Julie Kozlow of Temple B’rith Shalom in Prescott wanted the High Holidays to feel as intimate as possible, even if it had to be online. Along with three members of the congregation, Kozlow held services in her home to make the distance between her and her congregants seem less overwhelming than it might seem with her standing on the bimah in an empty sanctuary. She didn’t want those watching to have Zoom on in the background while they did chores or schoolwork. She liked the idea of being “in everybody’s face.”

Jessica Dreifuss, temple administrator, and Kozlow sang a cappella, and had a moment off mute before services. “It was a total lovefest,” she said, listening to everyone chatting to those they hadn’t seen in months.

Cantor Seth Ettinger of Congregation Beth Israel found himself in a somewhat different situation. CBI was one of very few Reform congregations in the country to open its doors for in-person services. On Rosh Hashanah morning 60 preregistered people who agreed to comply with CDC guidelines and sign a waiver were able to enter and sit apart in a sanctuary that holds 500 people.

“It was so overwhelmingly beautiful to have people in the sanctuary,” Ettinger said. “For us to be able to say, ‘Shana Tova,’ and hear voices saying it back to us brought a tear to my eye.” Even reminding people to silence their cell phones gave him a sense of normalcy.

“It was these little nuances that we have taken for granted — now that we have been separated from congregants for six months — even the smallest response was absolutely incredible,” he said. “It was a very emotional morning for the entire clergy.”

Ettinger was more than 12 feet from the nearest person behind a barrier nearly 9 feet tall. “It felt confining, and it was a constant reminder that this is the world we are living in,” he said. “No matter how many protocols, though, we have to feel blessed that we actually got to be in our sanctuary to celebrate — that was the most important thing.”

Dallett received many emails and texts from people who were delighted by the chorus video and thought it was beautiful. “It’s taught me when we do get back together how important the choir and the music is, and I don’t think I’ll question it anymore,” she said. “This is something the congregation needs and enjoys and really wants.” JN