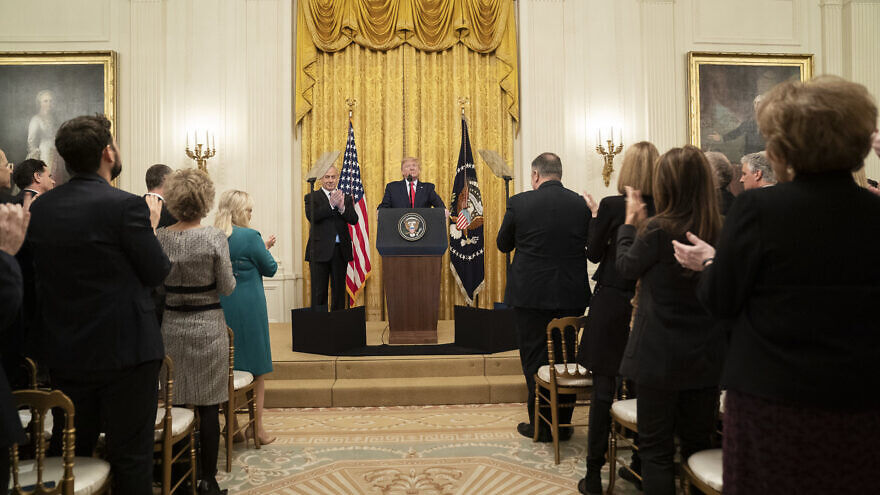 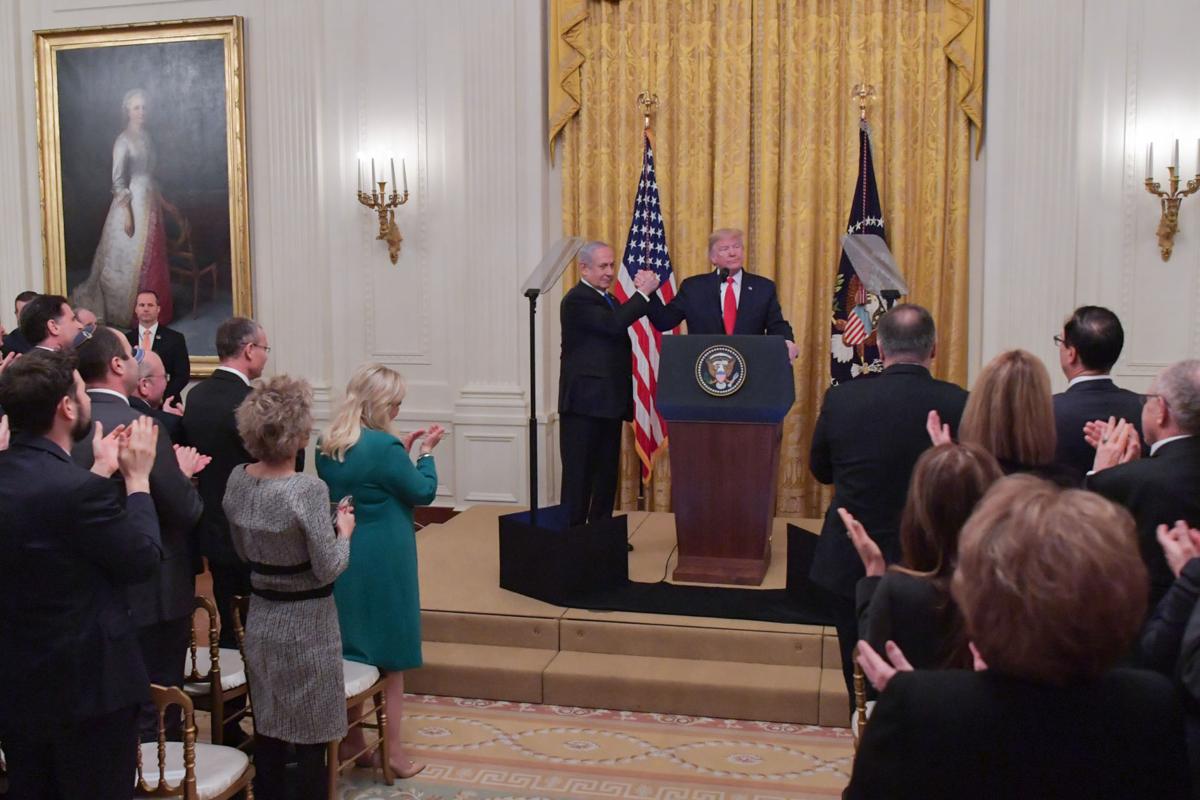 Jewish and Israel-related groups expressed mixed reactions to the Trump administration’s release of its long-awaited peace plan on Jan. 28.

“We appreciate the efforts of President Trump and his administration to work in consultation with the leaders of the two major Israeli political parties to set forth ideas to resolve the conflict in a way that recognizes our ally’s critical security needs,” said the American Israel Public Affairs Committee (AIPAC) in a statement. “Indeed, both Israeli political leaders view this framework as the basis to restart negotiations with the Palestinians.”

Its leadership said “we have long believed that direct Israeli-Palestinian diplomacy is essential to create a durable peace and lasting two-state agreement that effectively addresses the concerns of both sides.”

At the same time, AIPAC bemoaned that “the Palestinian leadership has continually refused direct talks with Israel for the last several years.”

“It is now essential that Palestinians forego the path of violence, boycotts and the criminalization of differences at international forums and return to peace talks with Israel,” continued the pro-Israel lobby. “We were encouraged to see that the ambassadors from Oman, Bahrain and the United Arab Emirates attended the announcement, and we call on the Arab states to play a constructive role in urging the Palestinians to resume negotiations with Israelis.”

AIPAC called for “Palestinians to rejoin Israelis at the negotiating table,” adding that “a lasting, genuine peace will inevitably require agreement between the parties themselves and tough compromises from both sides.”

‘A moment of opportunity for the region’

The organization’s national chairman, former Sen. Norm Coleman (R-Minn.), said in a statement that it creates a “realistic path” for the Palestinians to have a state while not compromising on “the requirements that the Palestinians reject terrorism, stop inciting violence, stop their indecent ‘pay for slay’ program that pays terrorists for their crimes, and end corruption and human-rights abuses.”

Coleman continued to remark that the plan “offers challenging steps to both parties, as well as the prospect of great achievements. If this plan can be fully implemented, it will change the face of the Middle East for centuries to come.”

The Anti-Defamation League affirmed its record as “a staunch supporter of the Jewish and democratic state of Israel living with security and at peace with its neighbors.”

In a statement, it said that “for decades, ADL has been a strong advocate for Israeli-Palestinian negotiations leading to a two-state solution that ensures a secure, equitable and lasting peace for both parties. Moreover, we long have supported the United States’ involvement in addressing the conflict and have encouraged the U.S. to play a constructive diplomatic role with the parties, believing that American support and facilitation can help Israelis and Palestinians take the risks necessary for peace. And so, we currently are studying the Israeli-Palestinian peace plan released today by the White House and carefully considering its implications.”

But ultimately, it said, “the two parties must engage together on a settlement of the conflict, and so we hope that this might prompt both sides to resume negotiations toward a two-state solution that leads to a lasting and just peace.”

Malcolm Hoenlein, executive vice chairman of the Conference of Presidents of Major American Jewish Organizations, declared Jan. 28 a “historic day,” saying he was encouraged by the proceedings.

“We saw the U.S.-Israel relationship in its full expression — a great moment of opportunity for Palestinians and Israelis, as well as the region,” he said. “Hopefully, the Arab states will support this initiative, and it will be backed by European and other countries that want to see stability and peace in the Middle East. We look forward to meaningful negotiations, and in the interim, the beginning of implementation.”

“This proposal provides a pathway to achieve a lasting peaceful resolution of this conflict that is well-grounded in a reality that includes Israel’s vital security needs,” B’nai B’rith International CEO Daniel Mariaschin said. “It should be clear to the Palestinians that this plan will not allow them to run from recognizing and accepting Israel as a Jewish state, a prerequisite for any serious negotiation that might ensue.”

EMET founder and president Sarah Stern said, “I really do believe that this is a good plan,” citing that it gives Israel control over the Jordan Valley and other land crucial for its border security, while giving the Palestinians “billions of dollars people want to invest in their economy to give hope to their children for a better future.”

American Jewish Congress president Jack Rosen said in a statement that the president, as well as his senior adviser and son-in-law Jared Kushner, deserves credit for constructing a plan that holds the best interests of Israelis and Palestinians in mind. “What the Palestinian people need most is the chance for economic growth, opportunity and self-sufficiency, and the economic component of the peace plan will facilitate investment, trade and cooperation,” he said. “An important part of this will be cooperation with neighboring Arab states, and some of them are already on board.”

‘He’s ignored one side’

NORPAC national president Ben Chouake said that while the plan is “fair and generous,” it won’t be accepted by Palestinian leadership.

“Unfortunately, the history of Arab leadership making peace with Israel turns out to be short-lived. King Abdullah I Bin Al Hussein of Jordan, Anwar Sadat of Egypt, King Faisal of Iraq all of whom tried to have peace with Israel were assassinated,” he said. “So this is a high bar to overcome especially for President Abbas who is years overstaying his electoral mandate and has little influence over that mandate.”

Meanwhile, J Street and the Jewish Democratic Council of America criticized the proposal, exhibiting skepticism from the get-go.

“Trump claims his plan is ‘win-win for both sides,’ but he’s ignored one side. This is a green light for Israeli annexation of the West Bank, an intentional undermining of a viable two-state solution & another example of Trump using Israel to further his domestic political agenda,” tweeted JDCA executive director Halie Soifer.

J Street did not hold back in its denunciation, writing: “It is absolutely clear that the ‘plan’ released today by the Trump administration stands zero chance of serving as the basis for renewed diplomacy to resolve the Israeli-Palestinian conflict. Instead, it is the logical culmination of repeated bad-faith steps this administration has taken to validate the agenda of the Israeli right, prevent the achievement of a viable, negotiated two-state solution and ensure that Israel’s illegal occupation of Palestinian territory in the West Bank becomes permanent.

“The timing of this announcement, coinciding with the formal indictment of Prime Minister Netanyahu and the impeachment trial of President Trump, only underscores that it is a cynical political maneuver entirely lacking in diplomatic credibility. Coming in the midst of an Israeli election campaign, this is an attempt to hand the prime minister a political gift and a distraction from the very serious charges he is facing.”

StandWithUs offered a neutral, yet hopeful, assessment. “As the U.S. administration presents a new peace plan, we know that it is ultimately up to Israeli and Palestinian leaders to resolve their conflict through direct negotiations,” said SWU co-founder and CEO Roz Rothstein in a statement. “We firmly respect the right of Israelis to decide what they need in any peace agreement and urge Palestinian leaders to finally engage in good faith. We hope this will be a step towards a better future for both peoples.”

Local reactions were similarly divided on the Trump administration’s plan.

Susan Bondy, regional council chair of the Israeli American Council in Arizona, praised the plan for offering a new vision for Israeli-Palestinian peace.

“I think it’s brilliant,” Bondy said. “Not everybody agrees with every little aspect of it, but what I love about this plan is that it’s a starting point. If you don’t like it, give us a counterproposal. There are ways to compromise.”

“This time there are several Arab states that are actually supporting the process and the proposal,” Bondy continued. “The whole process is brilliant, getting so many Arab states to support it, eliminating the issue of the Golan Heights beforehand, offering to give them so much money to develop their economy. What Trump has tried to do is eliminate as many of the potential problems as possible. I’m very anxious to see how it turns out.”

Civia Tamarkin, president of the National Council for Jewish Women Arizona, argued that the proposed plan fails to take Palestinian concerns into consideration.

“The National Council for Jewish Women supports an equitable two state solution that calls for a democratic Jewish state side by side with a Palestinian state,” Tamarkin said. “The Trump-Netanyahu plan is not that. This is a one-sided plan that is a green light for the annexation of the West Bank. It strips citizenship from hundreds of thousands of Palestinian citizens of Israel without their input and against their will. It calls for a Palestinian capital in an area outside of the large municipal boundaries of Israel. This is a plan that works under the guise of peace to actually undermine it.”

Dr. Victor Peskin, associate professor at the Arizona State University School of Politics and Global Studies, noted that the plan breaks many of the precedents set by the Camp David Accords.

“It’s a radical departure from previous U.S.-brokered attempts to reach a lasting and equitable peace plan,” Peskin said. “It’s one-sided, and its chances of success are limited and minimal, I believe. I don’t see that the Palestinian Authority will approve of this plan or enter into negotiations anytime soon.” JN