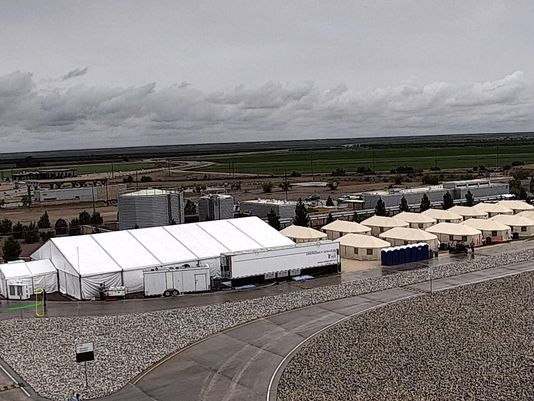 Children separated from their undocumented parents will be moving to several tent cities, including this one in Tornillo, Texas. A letter opposing the policy of separating children from their families and putting them in tent cities was signed by 26 national Jewish organizations. 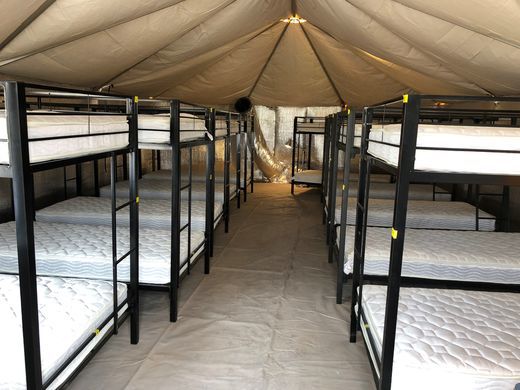 A look inside the Tornillo camp for undocumented children.

Children separated from their undocumented parents will be moving to several tent cities, including this one in Tornillo, Texas. A letter opposing the policy of separating children from their families and putting them in tent cities was signed by 26 national Jewish organizations.

A look inside the Tornillo camp for undocumented children.

Children taken from their undocumented parents will soon be living in tent cities along the Texas-Mexico border, including Tornillo, about 40 miles east of El Paso. The Tornillo facility is one of several to house nearly 2,000 children separated from their parents as a result of a “zero tolerance” policy on border enforcement announced by U.S. Attorney General Jeff Sessions in April.

Temperatures in Tornillo are expected to climb to 105 degrees or higher by the end of this week.

A number of Jewish organizations around the country have stated their opposition to separating children from their families and placing them in tent cities. A letter sent to Sessions and Homeland Security Secretary Kirstjen Nielsen was signed by 26 Jewish organizations, including the American Jewish Committee, the Anti-Defamation League, B’nai B’rith International, HIAS, the National Association of Jewish Legislators, the National Council of Jewish Women, NFTY – The Reform Jewish Youth Movement, the Union for Reform Judaism, the United Synagogue of Conservative Judaism, and Uri L’Tzedek, the Orthodox Social Justice Movement.

“As Jews, we understand the plight of being an immigrant fleeing violence and oppression,” the letter stated. “We believe that the United States is a nation of immigrants and how we treat the stranger reflects on the moral values and ideals of this nation.”

Carlos Galindo-Elvira, the Arizona regional director of the ADL, said Jews and Maricopa County residents in general have seen how tent cities can operate.

“We have on one side that these children are being separated cruelly from their parents and now we’re talking about housing them in tents,” Galindo-Elvira said. “From our lens as Arizonans, when we think of using tents, in terms of holding individuals, the greatest example that we have is how they were used formerly by the Sheriff’s Office of Maricopa County.”

Last year, newly elected Maricopa County Sheriff Paul Penzone closed the county’s tent city, which could house more than 2,000 inmates. It was a signature program of Penzone’s controversial predecessor, Joe Arpaio. In a 2008 video taken during an Arizona American Italian Club appearance in Phoenix, Arpaio described the tent city as a “concentration camp.”

U.S. House Rep. Will Hurd, R-Texas, who represents the district where Tornillo is located, toured the facility last Friday, confirming the tents have air conditioning units. At the time of his visit, Hurd said the facility had 400 beds prepared and that federal officials were considering increasing the number to 4,000, as reported in the El Paso Times on Saturday.

After touring the camp. Hurd blasted the Trump administration’s policy, according to an article in the Houston Chronicle.

“Separating kids from their families is a bad idea,” said Hurd, the first congressman to get inside the tent camp in his border district. “We shouldn’t be doing this. In the land of the free and the home of the brave you shouldn’t be using kids as part of our deterrence strategy.”

On Monday, President Donald Trump claimed that his policy was not responsible for the increase in family separations, blaming Democrats and existing laws. Other administration officials also pushed back.

“We do not want to separate parents from their children,” Sessions also said on Monday.

On Sunday evening, Nielsen tweeted, “We do not have a policy of separating families at the border. Period.”

But advocates and elected officials from both parties continue to criticize the administration’s policy.

“There is no law that requires children to be separated from their families at the border,” said Carol Consalvo, NCJW Arizona State Policy Advocate. “Ordering armed border guards to cruelly take children from their mothers goes against fundamental American values.”

Spurred by scenes of children held behind diamond-mesh fencing at a facility in McAllen, Texas, former First Lady Laura Bush issued a strong rebuke of the policy as well, which she described as “cruel” and “immoral” in an op-ed for the Washington Post.

“These images are eerily reminiscent of the internment camps for U.S. citizens and noncitizens of Japanese descent during World War II, now considered to have been one of the most shameful episodes in U.S. history,” Bush wrote.

She also pointed out that people who have been interned experience twice the rate of cardiovascular disease than those who have not.

“Trauma negatively impacts physical and mental health, including increasing the risk of early death,” the letter read. “Separating families is a cruel punishment for children and families simply seeking a better life and exacerbates existing challenges in our immigration system.” JN