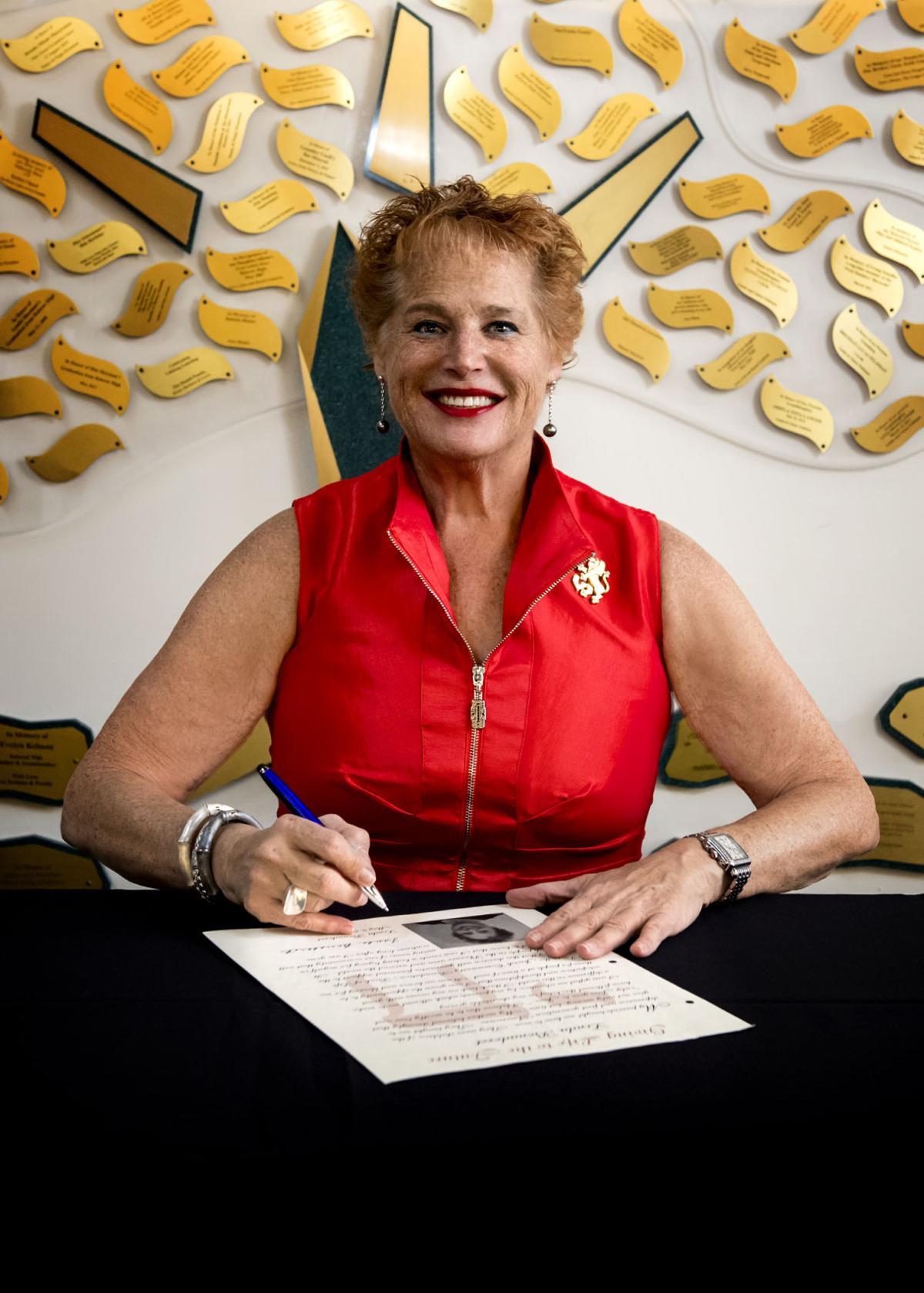 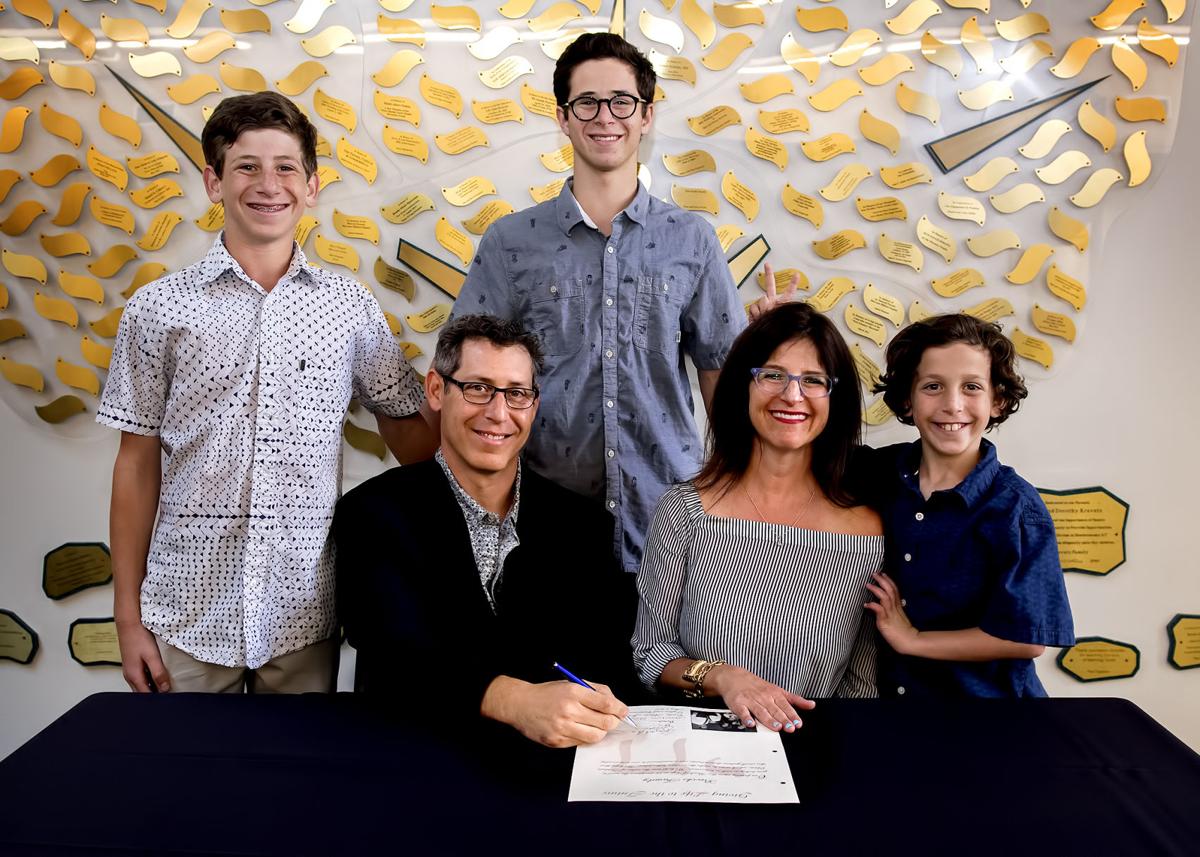 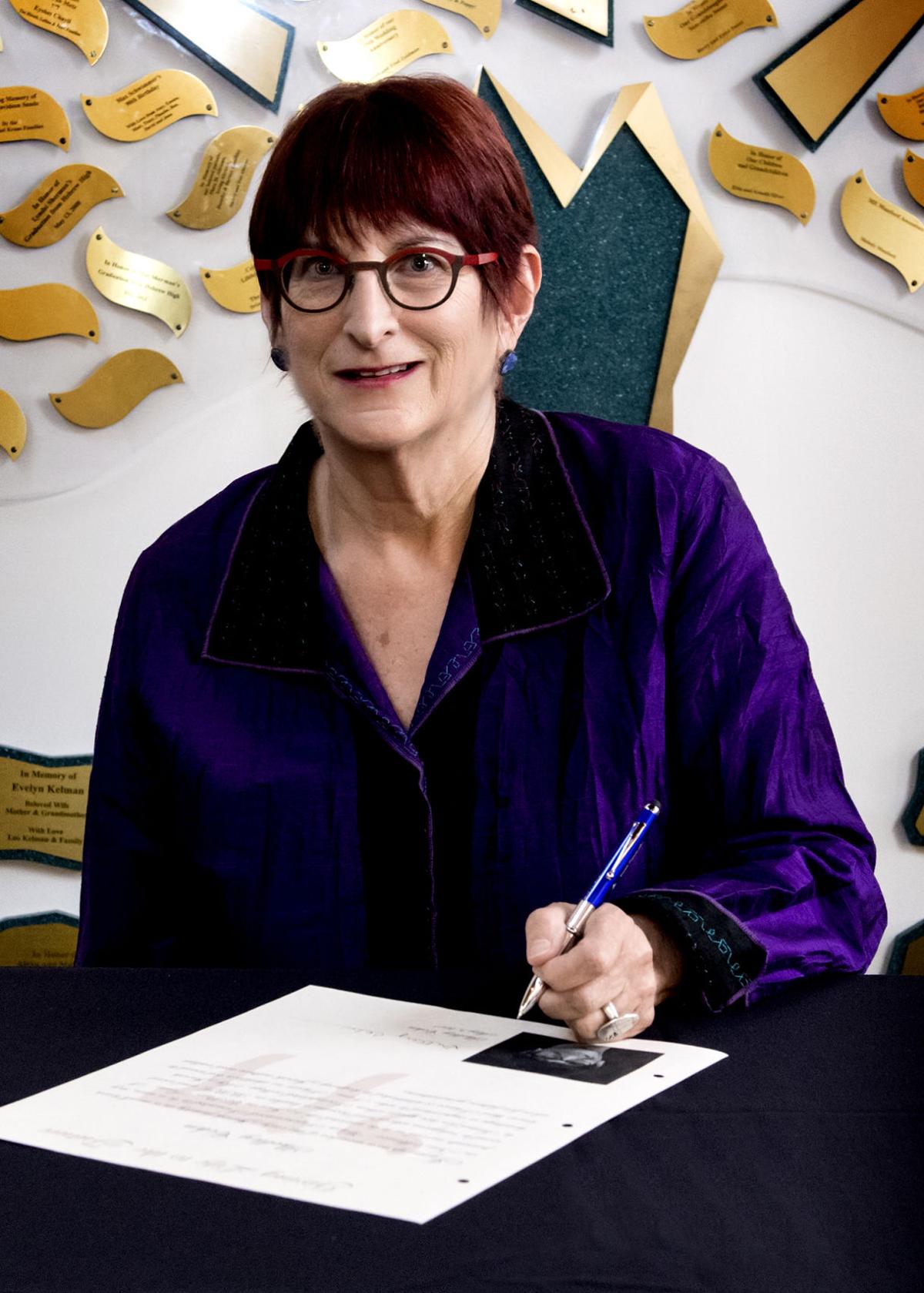 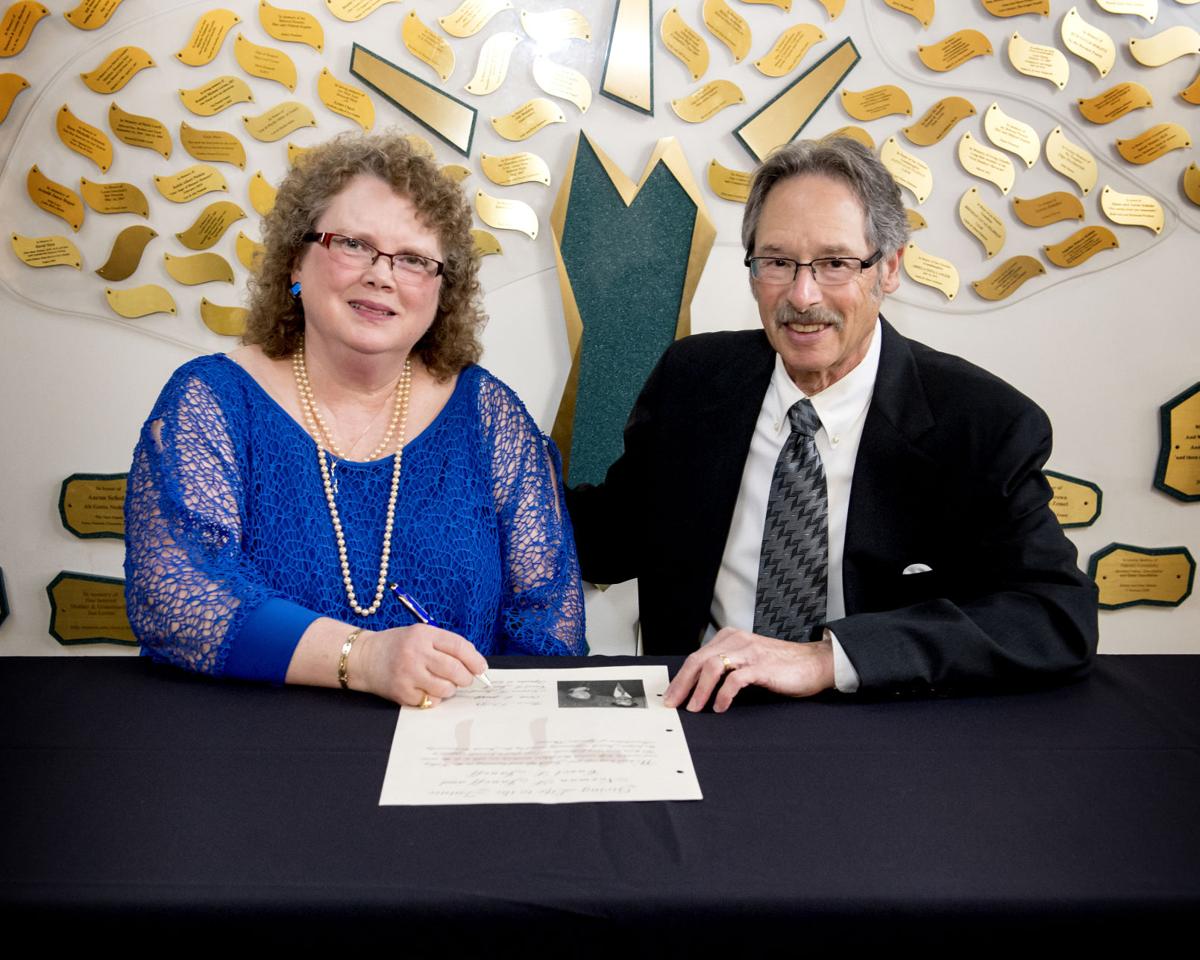 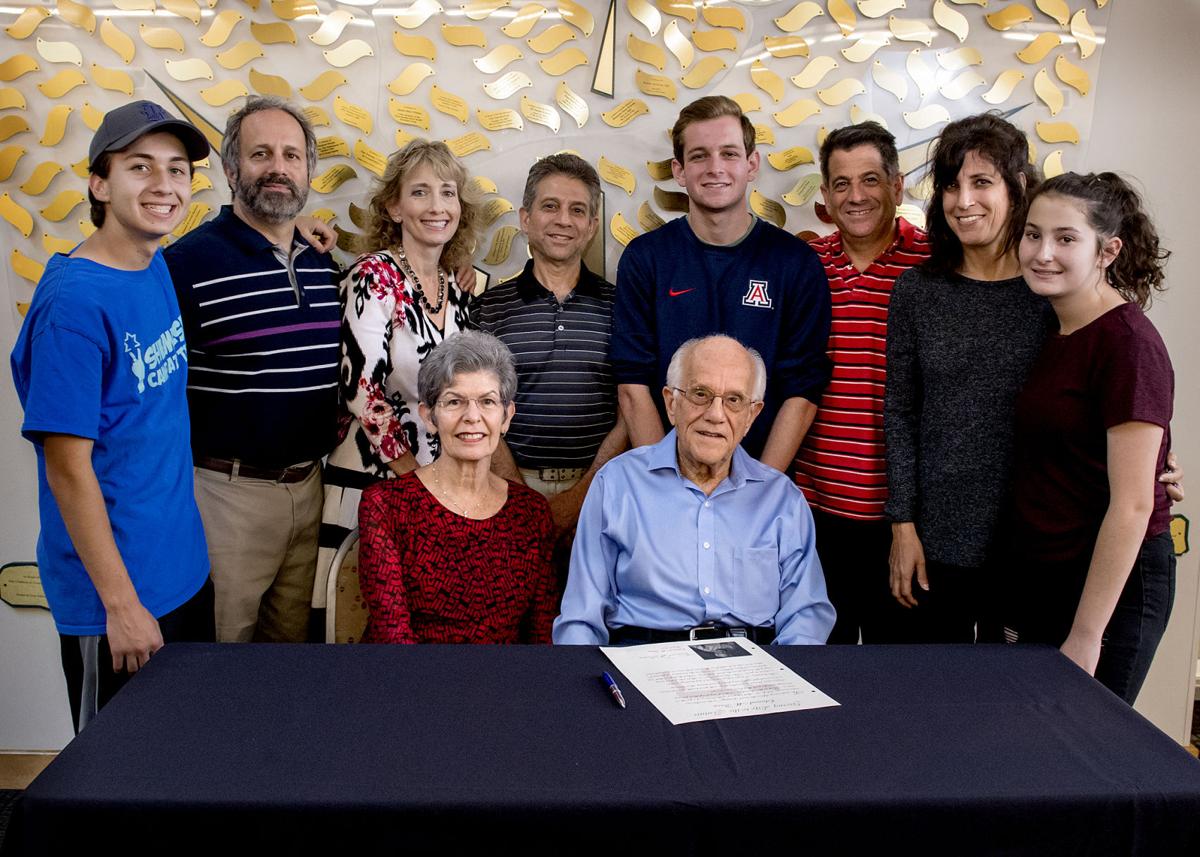 Edward Quen, front right, is pictured with his family; at his left is Connie Wolf and, standing from left, are Zachary, Richard, Sheryl, Michael, Justin, Scott, Andrea and Alexis Quen 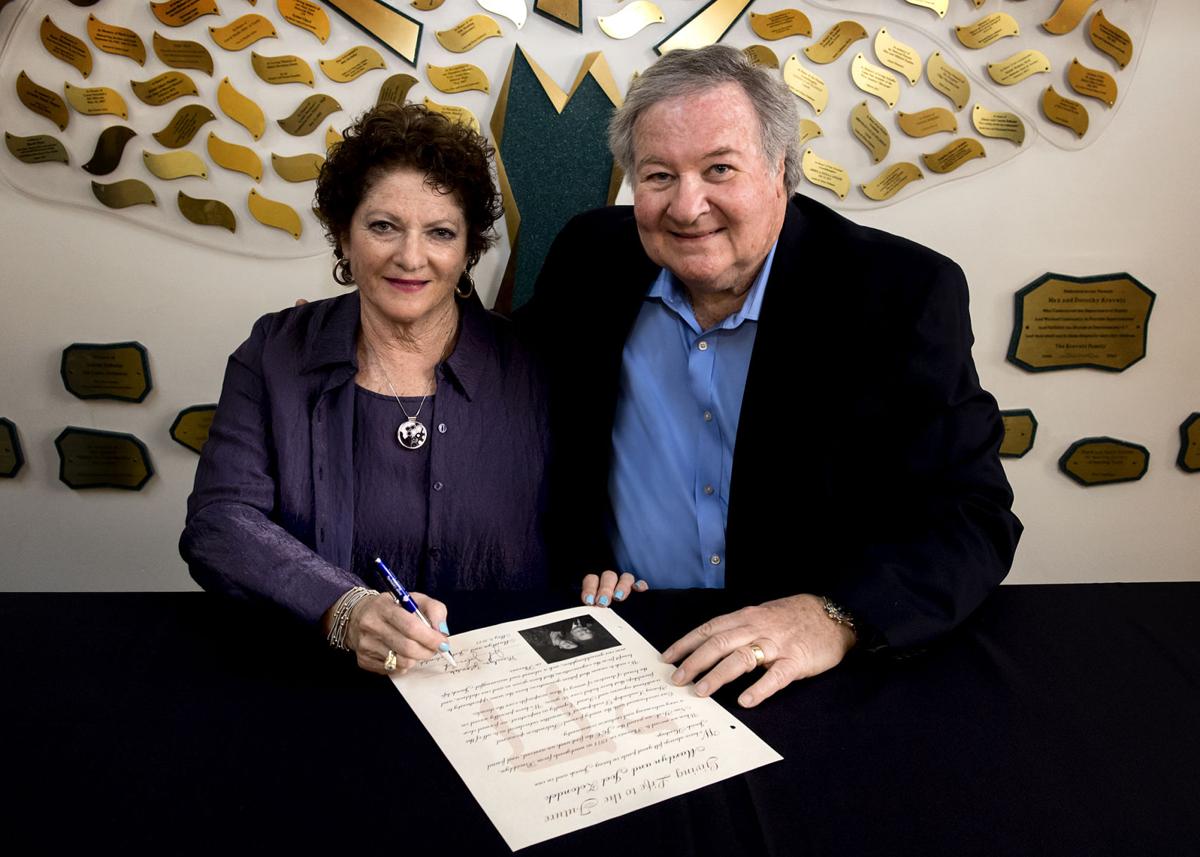 Edward Quen, front right, is pictured with his family; at his left is Connie Wolf and, standing from left, are Zachary, Richard, Sheryl, Michael, Justin, Scott, Andrea and Alexis Quen

The Jewish Community Foundation of Greater Phoenix recently celebrated individuals, families and organizations that are making a commitment to the future of the Valley’s Jewish community.

More than 200 people attended a May 9 celebration at the Ina Levine Jewish Community Campus that recognized the 2017 signers of the Endowment Book of Life and the organizations that are participating in the Life & Legacy program.

The Endowment Book of Life provides a way for people to share their values, visions, histories and hopes with future generations by entering a page in this archival record of individuals who have created or plan to create a permanent charitable endowment at the Jewish Community Foundation (JCF). Signers commit to create a permanent endowment through the JCF to benefit Jewish organizations, synagogues or programs that have been important to them during their lives.

Since the program’s launch in 1998, 420 people have signed the Endowment Book of Life. Some sign as individuals, while others have created an endowment as couples or families.

In JCF’s Life & Legacy program, launched in 2015, donors specify one of 12 local Jewish community partner agencies that he or she would like to create a permanent endowment for after death. Since the program’s inception, Life & Legacy has secured 628 declarations of commitment from 467 donors with an estimated future value of $21.6 million, according to Rachel Rabinovich, JCF Life & Legacy program director.

At the event, all 12 teams received their $10,000 incentive grant checks for meeting or exceeding their goal of securing 50 Life & Legacy commitments in the program’s second year.

The 2017 Endowment Book of Life signers are Linda Benaderet; Adam and Cindy Brooks and their children, Dylan, Jordan and Cameron; Shelley Cohn; Norman and Carol Janoff; Edward Quen; and Joel and Marilyn Zolondek. Here are their statements.

“My parents taught me how to save. They were children of the depression and first-generation Americans. They taught me to give not only money, but time. My mother believed strongly that ‘only Jews give to Jews.’ I believe this to be mostly true and have followed this belief in my charitable giving.

I was gifted an education by my parents that allowed me to make a difference in this world. I think back on my career with great satisfaction and thankfulness that I was given the opportunity to be there for people at a time of need. It was an honor and blessing for me.

I sign the Jewish Community Foundation’s Book of Life knowing that this decision will guarantee financial support to the Jewish people in the Phoenix area and around the world. It feels good to know that I can create a lasting legacy for myself in many areas of our community that will continue long after I am gone.”

“Our family signs this Book of Life as we recognize the need to give today, as well as tomorrow. We hold true the value of tikkun olam, which aims to make the world a better place. We hope that this small gesture demonstrates our commitment to our community.”

“I grew up as a member of the only Jewish family in a small town in New Mexico. When I announced I wanted to be a nun, my parents moved us to be around other Jews in El Paso, Texas. I went to religious school and became a leader in BBG and went to Israel for two years when I completed college. My Jewish heritage is important to who I am. I have no children but I want to know that I have contributed to keeping Jewish culture and values alive for future generations.”

“We have long enjoyed Jewish life and learning in the Valley and want to help ensure that future residents are able to do the same. We have been very fortunate and are glad to provide support to the larger Jewish community served by the Jewish Community Foundation of Greater Phoenix.”

“The dictionary defines the word ‘heritage’ as the traditions, achievements, beliefs, etc., that are part of the history of a group or nation. Such as the Israelites, I thank my forefathers for my heritage and the seeds they have sown for me.

I have been blessed in countless ways with good health, good fortune, and a wonderful and loving family and many other blessings.

The donation I make today is to honor my heritage and to continue to grow ‘The Giving Tree’ so others who follow may enjoy the benefit from the fruit of the tree.

And the hope is that my children and their children will continue the tradition of giving for others to be able to benefit from the fruit of the tree we have planted.”

“We have always felt great pride in being Jewish and in our Jewish Heritage.

When we moved to Phoenix in 1971 as newlyweds from Brooklyn, New York, we joined the JCC the first week we arrived, and found a very welcoming and inclusive community.

Our involvement with the newly formed Federation-sponsored Young Leadership Development Committee introduced us to all of the constituent agencies and Israel.

Equally as important, we formed close friendships that have lasted over 40 years. We have proudly served on the board of directors of many of these nonprofits over the decades.

We wish to ensure that future generations have the same opportunity to benefit from the organizations that have given us and our children, and now our granddaughters, such a vibrant and meaningful Jewish life in Phoenix.”