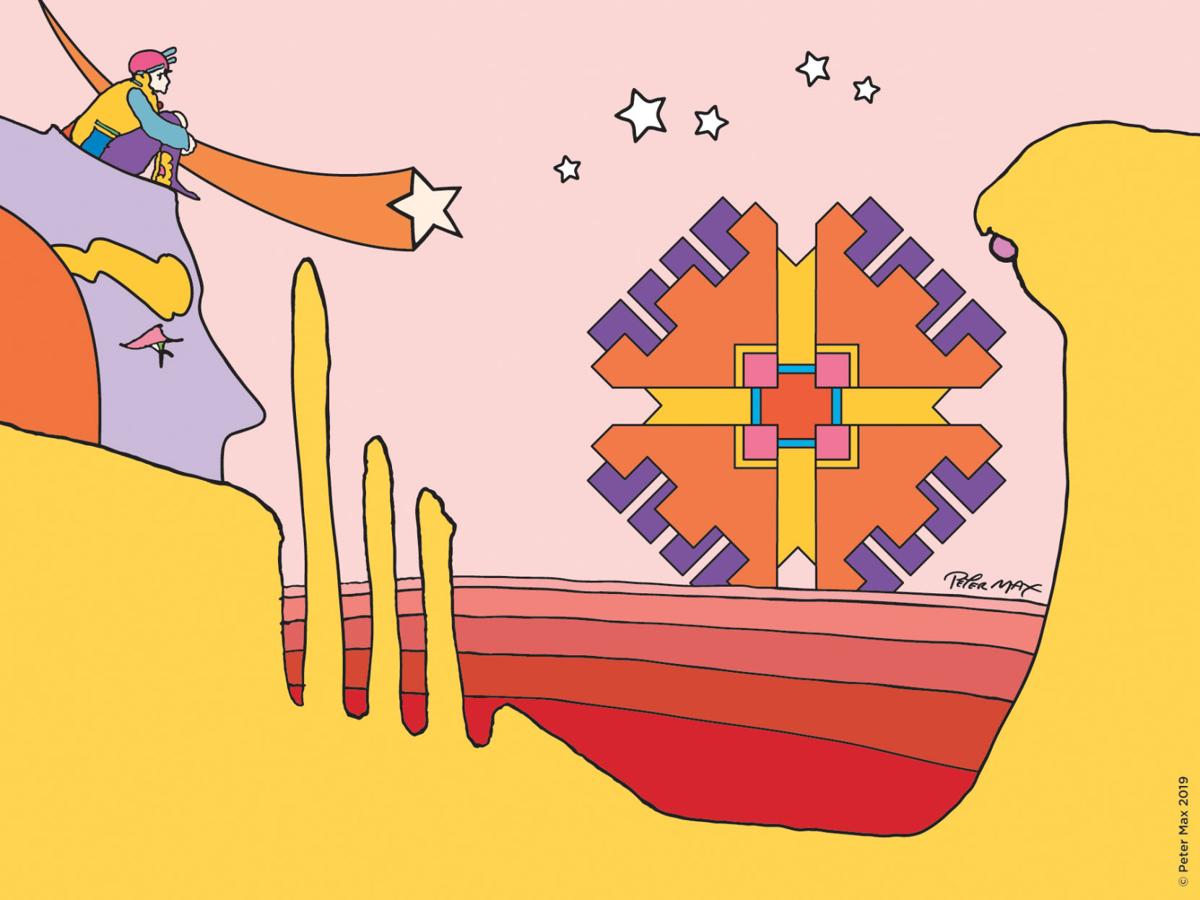 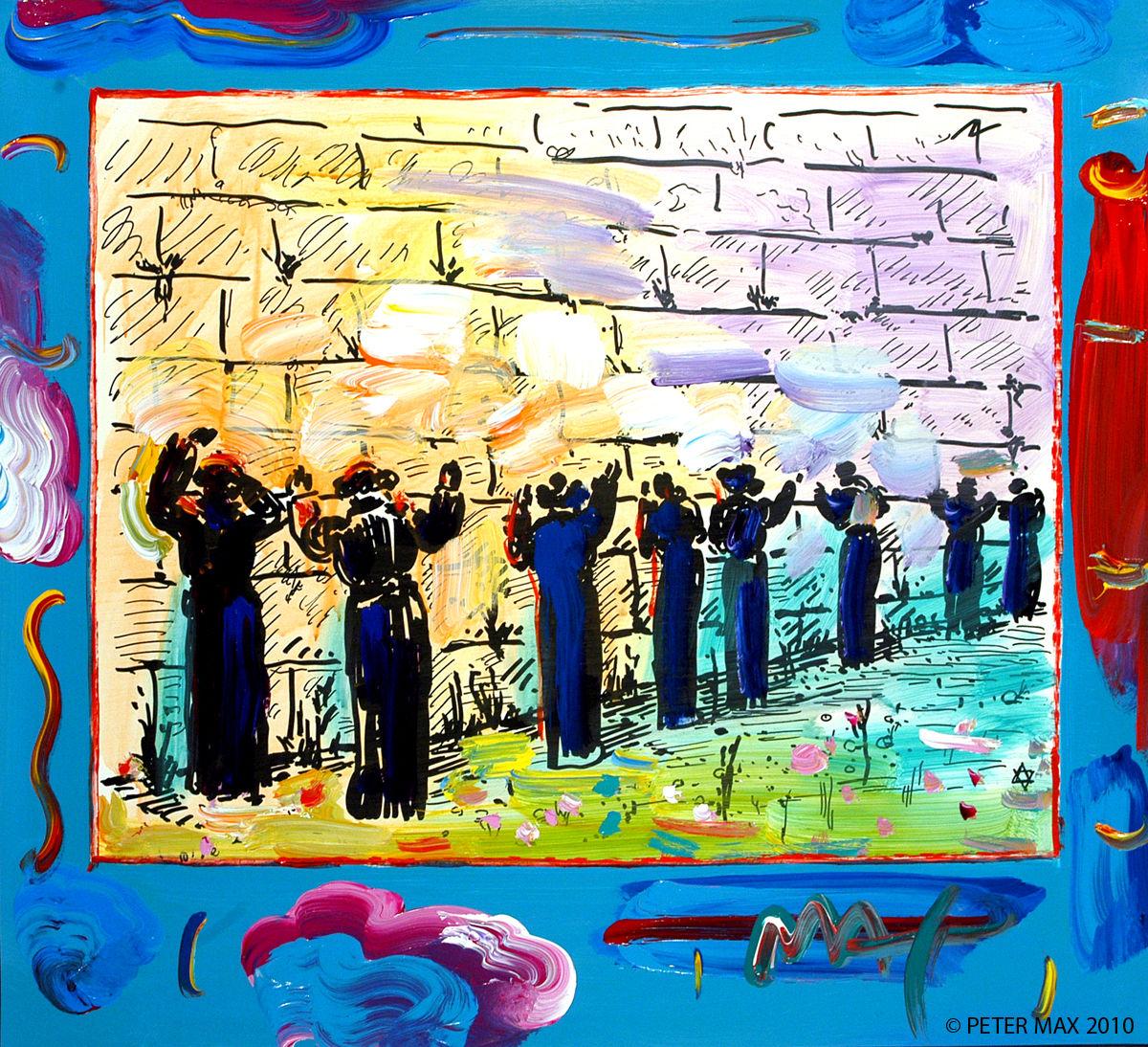 Above: Max has made multiple paintings of men praying at the Western Wall.

Above: Max has made multiple paintings of men praying at the Western Wall.

Legendary pop artist Peter Max’s work became popular during the social tumult of the late 1960s and early 1970s with its bright colors and sense of optimism. In today’s polarized society, Max hopes his old and new work will continue to bring joy to a troubled world.

“Joy can be found with just a little bit of looking, or when you’re not looking at all,” Max said. “I always want my art to make people happy and bring them joy. I’m happy when I’m creating art, and I hope that joy moves on to others.”

A collection of Max’s art will be on sale and exhibit on March 15-16 at DeRubeis Fine Art of Metal Scottsdale. The event will feature two new Max paintings specifically created for the Scottsdale showing.

“My inspiration for my ‘Cosmic Arizona’ pieces for this art show are the unforgettable desert, colors and landforms of the McDowell Sonoran Preserve,” he said. “These thousands of acres of unbelievable desert beauty were preserved by the grassroots efforts

of Scottsdale citizens, creating a beautiful

‘backyard’ for everyone. The shapes, colors and vastness of the preserve are surreal.”

The painting depicts a geometric image in the desert that Max said is an homage to the patterns and images Native tribes in the region weave into their textiles and baskets.

“It feels like they took their pattern inspirations from the desert, too; geometric and abstract shapes representing the nature around them — mountains, clouds, stars, owls, mesas and turtles.”

The new paintings also contain the cosmic elements that are frequently found in Max’s paintings.

“The desert seems endless with its acres and acres of mesas, buttes, arroyos, plains, trails and cactuses the height of buildings,” he said. “The desert reminds me of the vastness of our earth and universe. My cosmic characters in the painting are serene in the desert beauty.”

The Peter Max Retrospective Exhibition is part of a monthly boutique show that crisscrosses the nation. Lesley Smith has curated the show for more than 25 years and until recently Max traveled with her. At age 81 and experiencing some health problems, Max now stays at his New York City studio where he still works at a furious pace.

Even while creating new pieces, Max often goes back to some of his most iconic works, such as his 1976 Statue of Liberty, and paints them again but with distinct differences.

“There’ll be different color tones, different ways that he uses the brush or he’ll use the back of the brush to scratch into the paint,” Smith said. “He’s been doing the Liberty since the Bicentennial. He’s incredibly patriotic and is very appreciative

of being in America.”

Peter Max Finkelstein was born in Berlin in 1937 to Jewish parents. His mother was a fashion designer before the war and encouraged him to be an artist.

As an infant, Max and his family moved to China, where he spent much of his childhood and began painting and drawing. In 1948, during a stay in Tibet, the spiritual people and landscapes left such a strong impression on the young Max that those spirits were echoed later in his depictions of holy men and meditating figures.

That same year, after hearing about a ship leaving Shanghai for Israel, Max’s family rushed back from Tibet, catching

the ship and immigrating to Haifa. While there, Max’s mother sent him to art lessons with an Austrian Fauve painter who taught the boy the use of bold and vibrant colors.

The family also lived in Paris, where he studied the classic and modern masters. The family finally settled in Bensonhurst, Brooklyn, in 1953. Three years later, Max began his formal art training at the Art Students League of New York in Manhattan.

Although his parent’s families were affected by the Holocaust, Max’s age, distance from the horror and his sunny attitude have kept that darkness at bay from his work. However, he celebrates Israel and has done multiple paintings of the Israeli flag, the first as part of artwork used to celebrate the nation’s 50th anniversary. Also, Max was the official artist for the 2013 Celebrate Israel Parade in Manhattan, designing its posters, flyers and street banners.

His Judaism is seen most prominently in his multiple paintings of men praying at the Western Wall and in a portrait of his late father wearing a yarmulke and tefillin.

“I certainly would never say he was not affected by it, but I would say that in his life he has looked for the good and tried to spread happiness and positivity and optimism through his artwork,” Smith said. JN

An RSVP is required to attend the Peter Max exhibit. Call 480-941-6033 or email phillip@fineartofmetal.com. Writer Susan C. Ingram contributed to this story.