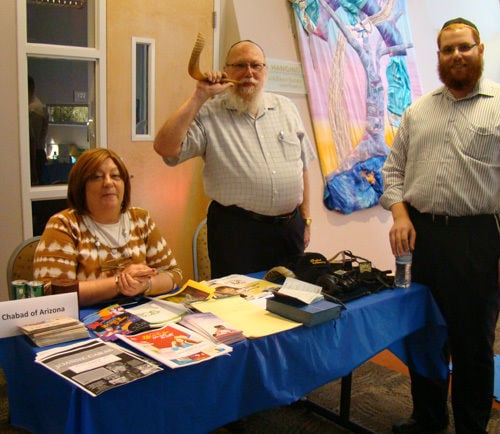 Rabbi Zalman Levertov, center, blows the shofar at a Chabad of Arizona booth at the Valley of the Jewish Community Center in 2013. Also pictured are his wife, Tzipi Levertov, left, and one of their sons, Rabbi Dov Levertov. 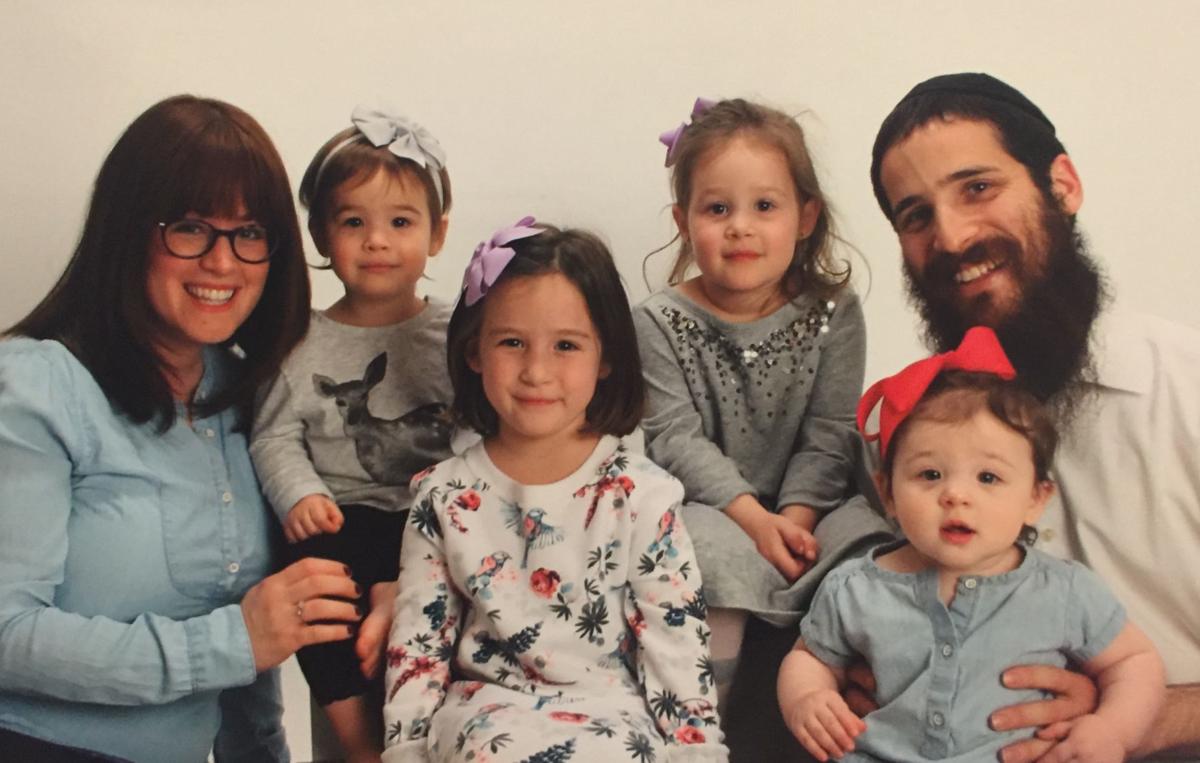 Rabbi Ephraim Zimmerman and his wife, Mushkie, founded Chabad of Oro Valley in 2012. 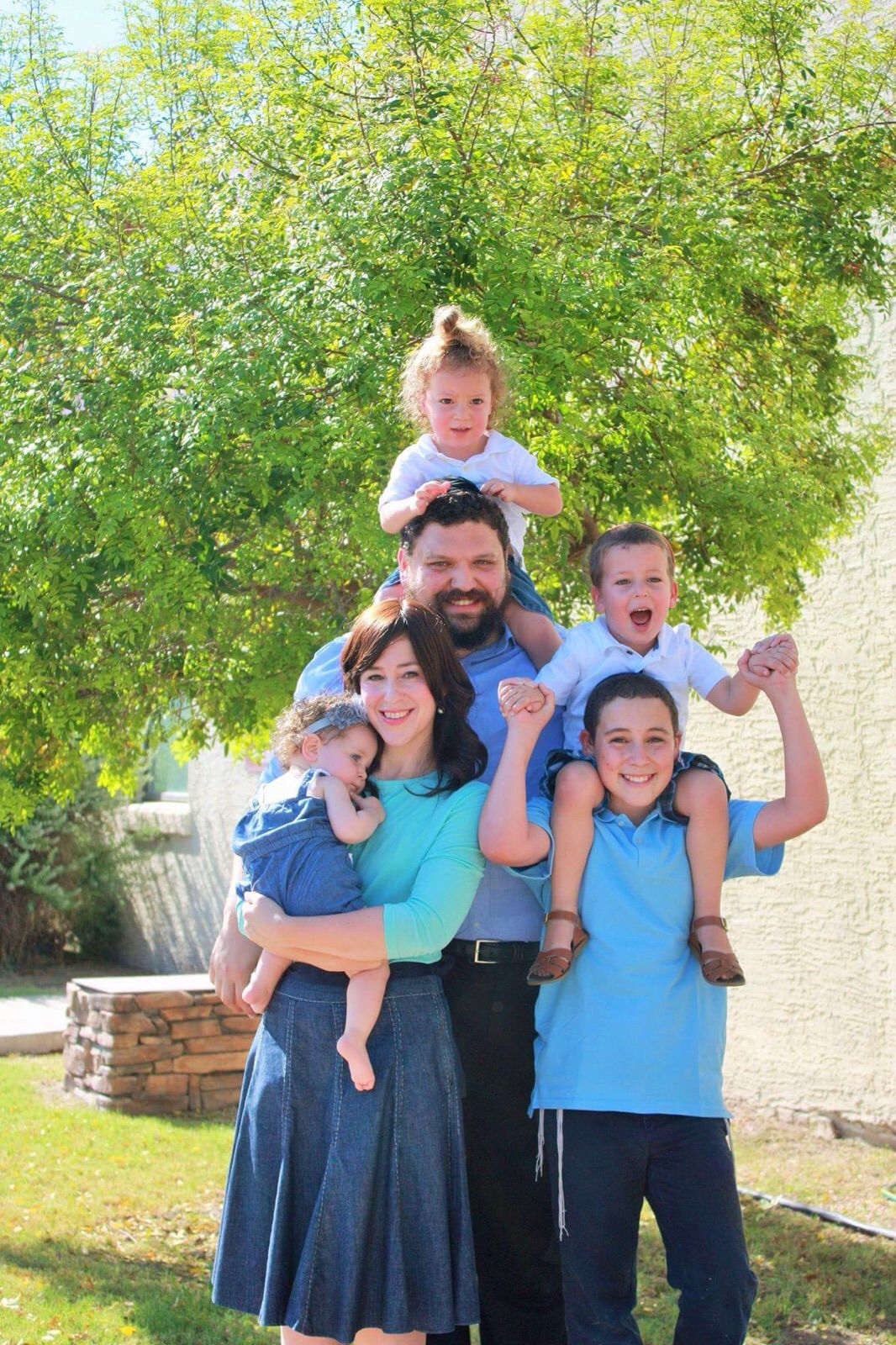 Rabbi Shmuel Tiechtel and his wife, Chana, founded Chabad at ASU in 2003.

Rabbi Zalman Levertov, center, blows the shofar at a Chabad of Arizona booth at the Valley of the Jewish Community Center in 2013. Also pictured are his wife, Tzipi Levertov, left, and one of their sons, Rabbi Dov Levertov.

Rabbi Ephraim Zimmerman and his wife, Mushkie, founded Chabad of Oro Valley in 2012.

Rabbi Shmuel Tiechtel and his wife, Chana, founded Chabad at ASU in 2003.

Break out the schnapps! This year, Chabad of Arizona celebrates 40 years of serving the state’s diverse Jewish population with a dinner on Feb. 26.

Chabad-Lubavitch, or Chabad as it is generally known, was founded in 1775 by Rabbi Schneur Zalman in the Russian city of Liozna, present-day Belarus. His desire, as Rabbi Zalman Levertov, founder of Chabad of Arizona, states, was “to serve G-d by helping others and also to bring the beauty of Judaism to our people.”

Chabad is an acronym for three Hebrew words that translate as wisdom, understanding and knowledge, the basis of the movement’s philosophy.

Chabad was located in Lubavitch, Russia, for 100 years, hence the second part of the movement’s name.

Since 1940, Chabad’s main headquarters has been in the Crown Heights neighborhood of Brooklyn, N.Y., where roughly 20,000 Chasidic Jews make their home today.

In 1951, the late Rabbi Menachem M. Schneerson (affectionately known as the Rebbe) became the seventh (and last) leader of Chabad-Lubavitch. Under his leadership, Chabad grew from a small Chasidic group to the largest, fastest growing Jewish movement in the world.

One of the Rebbe’s visions was to reach out to unaffiliated/assimilated Jews everywhere, including Arizona. A few highlights of Chabad’s presence in the Grand Canyon state, as mentioned in a 2002 article in Jewish News, include the following dates:

1977: The Rebbe sends Rabbi Zalman Levertov and his wife Tziporah (Tzipi) to Phoenix to reach out to Jews in Arizona, “making them more aware of their Jewishness (and bringing) them closer to their Jewish roots.”

1984: Rabbi Yossie and Chana Shemtov found the first Chabad center in Tucson. The Shemtovs’ son Benzion and his wife, Chaya, are directors of the newest Arizona Chabad, which opened in Sierra Vista in 2016.

1996: Rabbi Dan Hayman starts Chabad Russian Programs in Phoenix with a desire “to assist Russian-speaking immigrants with resettlement and to schedule programs for the Russian-speaking community.”

Today there are 21 Chabad centers in Arizona, including throughout the Greater Phoenix area, as well as Tucson, Prescott, Flagstaff and Sierra Vista. Chabad stresses that all Jews are welcome to any activities, regardless of ability to pay.

To learn more about Chabad and the many ways it reaches out to Jews in Arizona, Jewish News spoke to three rabbis: Zalman Levertov, the first Chabad regional rabbi in Arizona, Ephraim Zimmerman, the newest rabbi in Tucson, and Shmuel Tiechtel, rabbi of Chabad at Arizona State University.

Rabbi Zalman Levertov, originally from New York, is director of Chabad of Arizona. His grandfather, a Chabad rabbi, perished in prison in the former USSR while working for the previous Lubavitch Rebbe. Rabbi Levertov was strongly motivated to continue his grandfather’s work.

His wife, Tzipi, originally from Argentina, met her husband after she moved to New York.

How did you feel 40 years ago as the first Chabad Rabbi to come to Arizona? When Chabad headquarters called on us to represent the organization in Arizona, we were very pleased. We knew nothing about the community but were anxious to find out.

How are your children carrying on the Chabad legacy in Arizona and beyond? All seven of my children are involved in Chabad – some in Arizona, others in different states. Their work includes The Friendship Circle (for children with special needs), Smile on Seniors and Camp Gan Israel in the Phoenix area.

Rabbi Ephraim Zimmerman and his wife, Mushkie, founded Chabad of Oro Valley in 2012 under the mentorship of Rabbi Yossie Shemtov. Their program includes Shabbat lunches, classes on Talmud and more. This past December, the Zimmerman family spent several days hand delivering Hanukkah menorahs and candles to those Jews in the Oro Valley area who were unable to purchase them.

Why did you decide to be part of the Chabad movement? Born into a Chabad family, I have been involved in Jewish outreach since elementary school days. I can still remember visiting nursing homes at age 7 with my father.

What do you and Mushkie feel are your greatest accomplishments of the past four years? We are the only full-time synagogue in Northwest Tucson. It has been very gratifying to witness the diverse Jewish residents of this area blossom into a beautiful Chabad community.

What is your vision for the future of Chabad in Oro Valley? We want to connect with as many Jewish people as possible, be it for a listening ear, to put up a mezuzah in someone’s home or to be with them during their last few minutes on earth.

In 2003, Rabbi Tiechtel, his wife, Chana, and their son moved to Tempe to open the Chabad Center at Arizona State University under the mentorship of Rabbi Zalman Levertov. “We dedicate our lives to providing a warm presence to every Jewish student and faculty member,” Tiechtel said.

Why is it important to have Chabad on campus? Chabad gives students a safe place where they can experience and explore their Judaism. Through involvement at Chabad, students become informed and connected and often become leaders in the Jewish Community

How have students responded to your presence on campus? Students are thrilled to have a welcoming home away from home, a Jewish knowledge center and advocates on campus.

What are some of your most popular campus activities? We are well-known for our five-course weekly gourmet Shabbat dinners, a variety of weekly Jewish classes, many social programs and much more. We are also available to students whenever they need to talk.

Chabad rabbis, rebbetzin and their families receive very little, if any, remuneration from the New York Chabad headquarters and depend almost entirely on donations for their livelihood and programs. Considering the often modest monetary reward for the many hours they put in reaching out to Jews of all persuasions, their work is a spiritual calling.

Barbara Russek is a freelance writer living in Tucson. She welcomes comments at Babette2@comcast.net.