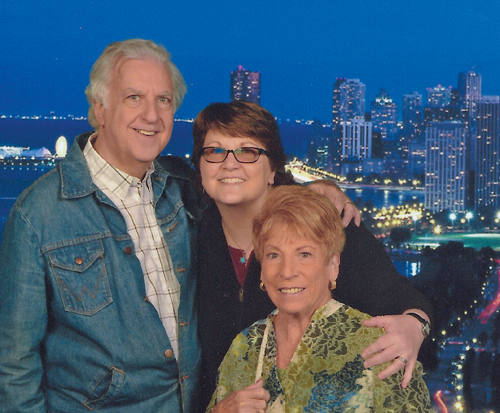 Sharon Kahn, center, her birth father Jack Decker, left, and adoptive mother Joanne Rockoff visit The John Hancock Observatory in Chicago. This August visit was the first time Kahn and Decker had met, although they had searched for each other for years. 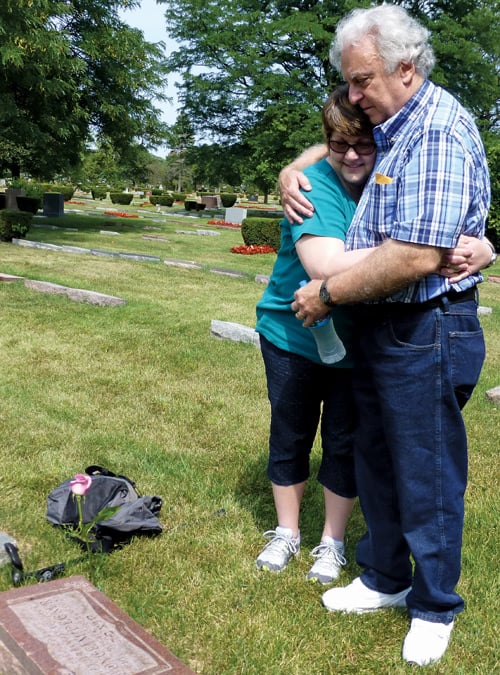 Sharon visits the grave of her birth mother during her recent trip to Chicago. She’s pictured here with Jack Decker, her birth father, whom she met for the first time during this trip. 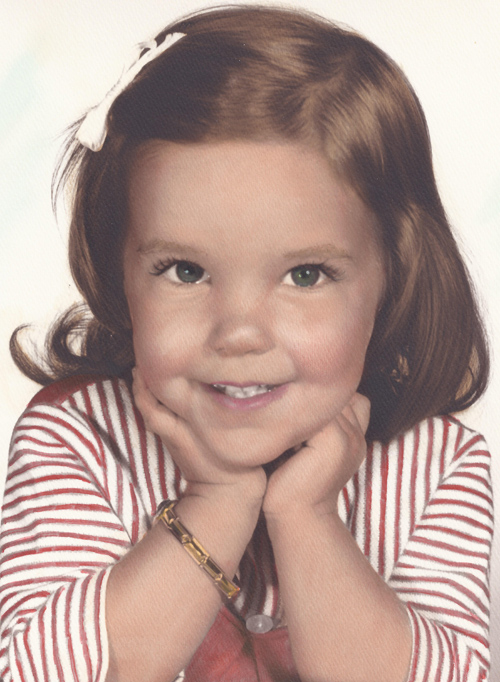 Sharon Kahn, center, her birth father Jack Decker, left, and adoptive mother Joanne Rockoff visit The John Hancock Observatory in Chicago. This August visit was the first time Kahn and Decker had met, although they had searched for each other for years.

Sharon visits the grave of her birth mother during her recent trip to Chicago. She’s pictured here with Jack Decker, her birth father, whom she met for the first time during this trip.

Sharon, who grew up in Phoenix and now lives in Northern California, started searching for her birth parents when she was a teenager. Her adoptive mother, Joanne Rockoff, had done some research a few years earlier in hopes of finding medical history that would help explain her daughter’s illnesses, but she came up empty.

Joanne and her husband, Marshall, had adopted Sharon when she was 3 days old and the only information they had to work with was her birth record, which listed her name as “Baby Girl Kahn,” and the name of her mother and maternal grandparents.

In 1999, after not having any success in her search, Sharon, now 48, changed her last name, with her adoptive parents’ blessings, to Kahn, thinking that might help her find family members. “I thought, if I can’t find them and this is going to be the best I can do, then I’m going to change my last name so I’ll have that connection.”

Not knowing her origins caused Sharon tremendous angst throughout her life, she says. “My adoptive parents, my family, are incredible people. I love them, but this was always a hole in my heart that I just couldn’t fill. No amount of therapy, no amount of anything could fill it.”

As she grew older, she was able to find more information through Internet searches. Within the past year, she discovered someone’s family tree on ancestry.com that listed the same first names as her maternal grandparents – the grandmother’s first name was uniquely spelled and her husband’s name was the same as Sharon’s maternal grandfather’s. But the last name was Kotlar instead of Kahn.

Years ago, through a court-appointed intermediary, Sharon was told that although her adoption file was mainly empty, the name Kotlar was penciled in. “So I always knew there was a possibility that Kotlar played in there somewhere,” she says.

Less than a year ago, she learned that her birth mother had died at a young age. “I just thought that was it, it was all over.”

In January of this year, Sharon became ill with the neuroinvasive West Nile virus. She had a significant immune disorder her whole life and she developed meningitis and encephalitis after contracting the virus. She suffered brain damage and nearly died.

Convinced that her search was over, she instead focused on surviving her illness. “I figured (my birth parents) were young, and I didn’t even know if my birth father knew I existed.”

High school sweethearts Jack Decker and Joyce Kotlar planned to get married after finishing high school in 1965. But when Joyce got pregnant during her senior year, her parents, prominent members of the Chicago Jewish community, sent their daughter away to Phoenix to have the baby, who was born on Feb. 4, and put her up for adoption. Months later, Jack and Joyce married, on Aug. 29, 1965.

The couple was heartbroken about giving their baby up for adoption, Jack told Jewish News, but didn’t want to interfere in her life and decided to try to make contact with her after she turned 18.

But eight years later, one day before her 25th birthday, Joyce died of leukemia.

“I promised [Joyce] before she died that I would find [our daughter],” Jack, a retired police officer who still lives in Chicago, told Jewish News in July.

Jack searched for their daughter for many years, but never got very far. After experiencing serious health issues, including multiple heart attacks, he accelerated his search.

Along the way, someone referred him to Janette Silverman, the education and youth director at Beth El Congregation in Phoenix, who is also the chair of the Phoenix Jewish Genealogy Society. She put him in touch with Hillary Kaminsky, a confidential adoption intermediary in Phoenix who took on his case. Silverman also contacted the Jewish News to see if the newspaper could help get the word out. “I’m in debt to her forever,” Jack says.

That day, Heather Figelman of Sun City Grand read the article and contacted her friend Joanne, who had first arrived in Phoenix in 1958. They had met through a bereavement group after they each lost their husband, and Figelman knew Rockoff had adopted her daughter and might recognize the story since she was a longtime Valley resident.

“When she read [me the article], I was screaming, I was crying, I was shaking,” said Joanne, who now lives in Sun City Grand. “Then I went and got the article so I could call Jack.”

She left him a message and “he almost didn’t call me back because I mentioned the wrong last name.”

Sharon says that her mother called her, “all choked up in tears,” and said, “I think we found your birth dad, he was looking for you.”

“When she told me, I just couldn’t believe it,” Sharon says. “I feel that it’s a miracle, I really do … It was one of the most amazing experiences of my life, besides having my kids.”

At this point, Kaminsky had already submitted the paperwork to start the case and the county wasn’t able to find the adoption record. She then filed a “Motion to Open” with the court, asking permission for the court to give her access to the vital records, such as the birth certificate, which is not public record. That was in process when Kaminsky met with Joanne.

But even if Kaminsky had been given that access, she would have reached a dead end.

Sharon’s birth certificate had her mother listed as Marilyn Kahn – Marilyn was Joyce’s middle name – and Joyce’s correct birth month and date but the year was one year off.  It listed the correct first name of Joyce’s parents, but the same false last name.

Oftentimes, when people make up phony information, they still incorporate aspects of their life, Kaminsky notes.

Before 1970, when it was considered more taboo to have a child out of wedlock, there was more of an emphasis on confidentiality, Kaminsky says, but in handling more than 100 cases in more than 20 years, she says she’s only seen one or two cases where the information was falsified.

“I understand that people want to protect their reputations,” Sharon says, “But you’re dealing with real live people that end up suffering because of information that isn’t available.”

Without the Jewish News article, “Hillary would have had nothing but dead ends because of the phony information,” says Jack. “Hopefully, nobody else will go through this. We could have reunited many years ago.”

Sharon and Joanne traveled to Chicago to meet Jack Aug. 10-14. Because of Sharon’s health issues, she required a doctor’s clearance and wasn’t able to travel alone.

In discussing a place to stay, Sharon suggested The Drake Hotel. After Jack told her that that’s where he and Joyce were married, it was an easy decision.

Sharon recalls a poem she wrote – one of many – in 1995, called “Eyes of a Stranger,” in which the first two lines are: “Searching the eyes of strangers, trying to find my own.” She describes how she felt seeing Jack for the first time: “In walks this guy into the hotel room and there are the eyes that I had been looking for, there he is.”

At one point, Sharon and Jack stood in the same place at The Drake Hotel where Joyce and Jack had stood under the chuppah.

Jack took Sharon and Joanne on a tour of the Albany Park area where Joyce and Jack grew up and went to school – which was the same area where Sharon’s adoptive father had grown up. Jack and Marshall had gone to the same grade school and high school – although 12 years apart – and lived only blocks away from each other.

“He is everything I could ever imagine and then some,” Sharon says. “He’s a very loving, wonderful and funny man, very intelligent. He reminds me a lot of my adoptive dad.”

Jack also took her to visit Joyce’s grave. “Even though I will never get to physically meet her, spiritually, as Jack said, it was like she was standing right there with us,” Sharon says.

“That was the closest she was to her mother since she was taken out of her mother’s arms in 1965,” says Jack. “It came from heaven. This was God’s hand in this.”

“It was just so emotional and so thrilling that it had finally happened,” says Joanne. “It was like finding the last piece to a big puzzle.

“We wished that it happened earlier in life so the two of them would have had more time.”

Jack Decker and Joyce Kotler, both 17, were high school sweethearts and planned to get married after finishing high school in 1965. But when J…